I have a bit of a collection of Victorinox and Victorinox Delemont (what was Wenger) SAK. I have one in my pocket (today a mini-champ with red alox scales), one in my work day sac, a Workchamp, and another classic in my EDC/FAK pouch. They are fantastic tools. I've even seen someone battoning with a slip joint SAK on YouTube (don't try it)!

But, Boker + have brought out their tech tool range. I have two of them, and the knife blade is far better and sharper. However, the other tools are at best equal, or a little bit less effective than the original Swiss versions.

My advice is to work out what you want your SAK type tool to do and get one that has those tools on it. Decent pliers for under £100 then go for SOG, Leatheman or Gerber. Otherwise, look at the Victorinox ranges and you will find just about everything you could want.

Next time I go camping (family camping, no campfires allowed boo hiss) I'll take my Vic Explorer, with either the Rangerwood 55 or Outrider in my bag.

Bit of an update on this after a bit over a year or so - I did just break the Draper tool by totally abusing it trying to turn a screw it had no business turning. One of the rivets popped off so the knife wouldn't sit tight, I just removed it at and the rest of the tools still work fine but I might be looking for a replacement. Still, the good thing about cheap SAKs like this is that I was totally comfortable abusing it because it's no great loss if I do break it - and in fairness the thing has held up surprisingly well over the past year. Used the saw a lot on archaeological digs (and just gardening) when I've needed to take out a root and it does the job great for something you can just keep in your pocket. The spring for the scissors popped out at some point but that's no great loss to be honest. The screwdrivers came in useful but the Phillips one wasn't that great to be honest - I think I agree now that it's not really necessary. A smaller flathead on the edge of the can opener like on a Victorinox can turn most Phillips screws, and if you need more torque than that can give then it's not really a job for a SAK no matter what tools it has.

I never bothered to sharpen the blade and it's pretty blunt now, but it does most jobs I need it for - not going to try wood carving with it or anything. The can opener works well enough and it's pretty useful when camping, considering a lot of the cheaper soup/bean/spaghetti hoop tins don't have ring pulls. I don't think I've ever used the corkscrew, but if I was camping in France or somewhere then I can see how it might come into its own. I used the sewing "needle" once for a very specific purpose, could easily carry something better. The nail file was useful but I often just reached for a better one instead. And I could honestly take or leave the pick and tweezers. Oddly enough I didn't end up using the fish descaler

I'm not sure I'd go as far as to recommend this specific knife considering the scales popped off almost immediately and I had to glue them back on - may just be a rare fault. But at the end of the day it's done the job well and if you don't have the money for a SAK that's going to last you a lifetime you can still get a tool that's useful to carry around. Also good if you're not sure what tools you'd actually make use of day to day to get something cheap with all the bells and whistles to actually try out for yourself before you drop a bit more money on something that'll last.

I'm not sure what to get next... I'm considering getting something else fairly cheap as I graduate next year and (hopefully) might have some disposable income for the first time in my life. But at the same time I might want something I can rely on if I do end up going travelling for a bit. Sealey do some ones that look decent, assuming that logically spending more money on fewer tools would mean better quality tools. Eg;

https://www.ffx.co.uk/tools/product/Sealey-Pk34-5051747789432-Multi-Tool-8-Function < this would probably be perfect if it had a saw instead of the scissors. As it has hex bolts I'm kind of wondering if I could just swap out the saw from my draper tool...

https://www.ffx.co.uk/tools/product/Sealey-Pk10-5051747604773-Multi-Tool-10-Function < there's this which does have a saw (albeit a super short one), but I'm really not sure what I'd do with pliers and it seems a bit large/heavy to accommodate them. Similarly the Stanley leatherman clone seems to come well recommended but apparently it has non locking tools, which I've always found to be a huge pain on hex multitools for bikes

https://www.ffx.co.uk/tools/product/Gerber-31-000021-013658111721-Vise-Pocket-Multi-Tool-Black < briefly toyed with the idea of this, reckon I'd probably have more use for a can opener than pliers though and I'm not sure how effective that "serrated knife" would be on wood

I'am a MAHOOSIVE SAK fan, have been since I bought myself my first Spartan in Harlech High Street camping shop when I was ten, never not had one since. A few months back I treated myself to a Boker Tech Tool, SUPER impressed with the quality and value too. It won't be my last.
J

If look at Ruike Criterion series

You'll notice the similarity, and wider range of sizes and options.
B

I'm a huge SAK fan too, but I never saw Boker's lineup. How are the back springs strength wise? My son collects different traditional knives and has some Bokers. Some of his seem a little weak in that area.

I have 3 Boker Techtools, all are very good quality and the springs seem strong enough to me, not so strong you can't open the blade but firm enough.

The Ruike variant isn't quite the same (I don't have one so can't comment on quality) The screws are only on one side of the scales making them a bit cheaper to buy. Otherwise they look identical.

Edit - I'm talking rubbish, I went and had a look at my TT1's and they's are identical, screws only on one side.
Reactions: Nice65

So I got the Sealey PK34 for £7.45. Avoid, is my review If you need something cheap just get one of the Silverline/draper clones, they won't last but they'll do the job. This thing is too big and heavy to really just slip in the pocket, and while the tools themselves may actually be decent quality some of them are so stuff that it feels like you might break a nail getting them out. I thought it'd be easy to adjust given that it has torx nuts, but interestingly the "nuts" are actually just small discs with a torx head imprinted on them, that are glued into the scales. 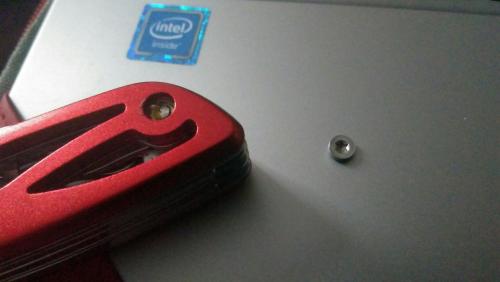 Not really worth returning. Probably just going to double down and get the Festool branded Viccy Camper. Buy cheap buy twice...

You really can't go wrong with a SAK Milky - The Festool Camper looks lovely and it'll be fiften quid well spent. Fifteen quid for a lifetime guarantee isn't bad!
B

I just ordered a Victorinox Hiker though Amazon for £11.99. I don't even need another SAK but at that price I couldn't turn it down

No idea what is going on with SAK pricing recently. £11.99 for a whole knife and £2.75 for the pin that fits in the secret pin hole Why doesn't it just come with a pin anyway? and this knife has everything the farmer has plus a few extras and costs less than half the price. The thicker blade can't add that much.

Wife's sewing kit to the rescue with the pin anyway

The alox scales push the price up for the Farmer - I imagine it's a much tougher knife but immaterial for what we use them for. The price of the pin is a rip off when any pin will fit.

Great deal though!
B

Mags is right. The only Vic pin I have is the one that came with my Swisschamp. All the others are from the wife's pin cushion!

Lol! You could order an official Vic pin but who knows how to verify what turns up! Next time I need a pin I'll order one from your wifes pincushion Bazza :You_Rock_
J

Have you seen the firesteel on Kickstarter that'll go in the pin slot of the SAK? Could be a nice way to fill a hole

Sent from my ONEPLUS A3003 using Tapatalk

It's a firesteel to go in the toothpick slot - there are so many threads on it on https://forum.multitool.org/index.php?action=forum As you can imagine, we are very excited about it (no affiliation to seller - just a massive SAK fan).
B

I'd love to have one for each of mine!!
S

I'd like to buy a Ruike M11 or Boker Tech Tool in green but can't find any anywhere!

Try a look at the Compact. I have a pile of Victorinoxes, plastic ones, alox ones, none of which I have carried since I picked up a Compact a couple of years ago.

steveparry said:
I'd like to buy a Ruike M11 or Boker Tech Tool in green but can't find any anywhere!
Click to expand...

Large US suppliers would be the best bet. EBay.com and Amazon.com have them, but don’t ship internationally, might be worth sending an email to see if they’d make an exception.

Short of that working out, you could get a similar City model and some olive green G10 and use the black scales as templates. Or micarta, it’s much easier to work with.