RonW said:
They don't look like real blankets to me, Martti. Not as thick and fluffy, but more like a flanel kind off sheet.
Click to expand...

The author gave weight only for one speciment, a 2.2 by 2.2 meter sheet weighted 4.2 kg. This means that it weights around 900 grams per square meter, a bit more than my blankets weight (they are around 750 grams/m²). However this is only from one sample and usually these bed sheets had between 10-20 warp yarns per centimeter (21 being maximum) which might make them lighter. For comparison a typical Finnish Iron Age outer wool clothing might have had around 15 warp yarns per cm.

Some of the sheets were also washed several times with soap to make them fluffy (i.e. "sarka" cloth).
M

Another book I read was Hugo Richard Sandberg's book "Hiihtourheilu Suomessa" from year 1891. This was the first book written in Finnish on skiing and skis. The book was written during a time when each region of Finland had their own ski design and only natural materials were used. I have only experience from fiberglass and plastic skis, but I dream from a day that I can effort to buy a pair of wooden skis (they cost around 400 per pair). Based on the book and some reports by Finnish Defence Forces from the WWII, I wrote following summary to help choosing a suitable pair of wooden skis. As English language lacks of some key words to describe parts of a ski and skiing weather, I have tried to explain them using other words.

Open. 8 to 9 feet long and 3 to 3½ inches wide skis are the best if you expect to run into different terrain during a journey. These are fast and lightweight if made from birch, but are not suitable for skiing in dense forest or in alpine terrain. The center of gravity should be set just in front of the bindings. The profile is shaped like flat, wide triangle. They are also known as Kajaani skis after the region where they were made during the late 19th century. It is quite interesting that Finnish Defence Forces used decades to develope skis that end up being very similar to the one presented here.

Forest. Skis for forest are wider and shorter than the others. So called Tavastia skis are only 6,5 feet long but 6 inches wide. Sandberg thinks that if made from a quite lightweight tree, such as Aspen, it would be almost perfect ski for hunters in cold and dry snow. I have to point out that during two tests arranged by the FDF, snowshoes outran skis in short distances in open terrain and also in forests when the snow was loaded with moisture. They were also better than skis to be used along with an ahkio. One can walk around 3-3½ km/h in virgin snow and 3½-4½ km/h in a snowshoe track with them. However if you have to climb a steep hill, it is better to have a ski pole with you to help you in climbing.
M

Here are two excellent designs for those who want to make their own axe handles. The top one is for cutting and the lower one for splitting axe. Traditionally these were made from birch, but rowan and ash can be also used. The head for these model weighted around 1-1½ kg and had a blade width of about 80-105 mm. Originally printed on "Metsämiehen hakkuuopas" in 1957.

In addition to Kaukonen's text on bed sheets, I recently read a historical study on the 18th century beddings in Finland Proper from Saini Laurikkala. I have not found anything written about the beddings made by hunters during the hunting journeys, so this is a valuable study indeed.

The bottom layer was made with straws inside the house, but I guess that spruce bed was use instead in forest. A wool blanket (if needed) was put on top of this as discussed before. As a cover the houses did have blankets made out of sheepskin and wool backing. I'm not sure if the hunters did want to carry this to the forest, but we have references that Finnish seal hunters did use similar contraption out in the sea. Finally there was a pillow made out of wool outer cover and inside filled with downs, reed heads or reindeer furs.

Love that kind of thing
M

The most popular liquid container employed by the Finns in previous times was a wooden carrier called leili or lasku. The oldest museum speciment of this model is from year 1725, but they were also known during the 17th century. They were in use up to 1920s after which they were gratually replaced by glass and plastic containers. The two "bottoms" were made from pine or spruce, while the smaller "sides" were from juniper, aspen or alder. The bands were made of spruce or juniper. Smaller containers could be made whole of juniper. The average dimensions for twenty museum speciments were 30 cm for height, 25 cm for width and 15 cm for thickness. The average leili could thus held about 2½ - 5 liters of liquid.

Nice one, Martti!
I am planning on making something like this for a while now. Constructionwise they resemble the US civil war-era canteen, which are round and flat and smaller.
What I like about this one, is that the rims are wood, too. Looks like a branch split in two.
M

RonW said:
Nice one, Martti!
What I like about this one, is that the rims are wood, too. Looks like a branch split in two.
Click to expand...

Here is a piece where the side is made out of single piece of wood. The band is probably made out of a sapling and it is not split. Behind the first link you can see more water containers made with the same technique. They were found during archaeological excavations in the city of Turku and are roughly dated to the 14th or 15th century. Rather interesting fact is that during the same excavations they also found a 700 year old Sámi drum hammer from middle of the city!
http://www05.turku.fi/museo/Arkisto/puu.html

Really enjoy your posts in this thread Martti. The bark containers in post 63 were of particualr interest. I have a friend who makes them in Northern USA where they are simply known as a great lakes pattern. No one knew if they were Native American or European designs originally. This is one Jarrod made for me. 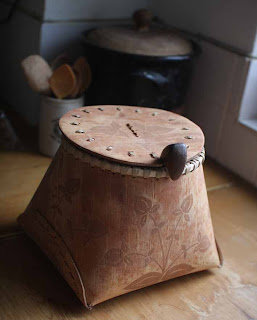 You can see it is exactly the same design as one in post 62.
M

It is always nice to receive comments on one's postings! Again, if you have any area of interested, I make my best to please you with new postings.


robin wood said:
The bark containers in post 63 were of particular interest. I have a friend who makes them in Northern USA where they are simply known as a great lakes pattern
Click to expand...

I would think the pattern was selected for the reason that it is the easiest/strongest option for making one or two piece birch bark containers. The same thing can be observed e.g. in Northern Eurasian bows and skis that are almost identical from Finland to Bering Strait!

P.S. On the other day I visited a local store for antique building materials and found out that they also have a supply of old Billnäs axe heads for 7-15&#8364; each. It would be a quite simple task to buy one and make a new shaft as per the instructions posted earlier. I really not have a use for an axe of that size right now but perhaps later I will...
M

If you wonder what else Finnish men carried on their belt, expect a puukko and an axe, look no further. Crochet bag became popular engagement gifts to the groom during the mid-19th century. These could be used to store similar things that a leather one would contain: tobacco, firesteel, needles. I am now trying to get a copy of a book that explains how these were made.

matti i thank you for this wealth of information!!!

I think this is by far the best post in a long time. Very well written. I enjoy this presentation. Keep up. Greetings from Slovenia.
Last edited by a moderator: Dec 8, 2011
L

Really great thread! Thanks for this wealth of fascinating insight Martti

Again, thank you for the kind words! Since we're closing in to the best hunting time for fur-bearing animals, I decided to show you few fur items from Finns', Karelians' & Sámis' inventory.

What I have been reading from old property inventories starting from the 17th century, ordinary people wore only fur items made from reindeer, sheep, seal, badger, squirrel, dog, wolf and bear. The more valuable and/or weaker skins were sold or collected by the State as a tax. These include lynx, beaver, marten, wolverine and fox. Interesting enough moose's skin was not used as it is but was tanned into leather. Some animals could be used by the people themselves or sold abroad, as it was in the case of otter.

I have some patterns for mittens and hats if anyone is interested.

The mittens look good and so does that Finnish hat!
M

RonW said:
The mittens look good and so does that Finnish hat!
Click to expand...

Glad you liked the hat. I can give you the pattern if you want it! Meanwhile we can continue with the theme.

7. Sámi bag made out of a Black-throated Loon.

Here are two patterns for Finnish "moccasins" or paulakenkä as they are called here. They could be used either during the summer or winter, first along with footwraps and latter with shoe grass or straws depending of the municipality. Some say that straws were better. A colourful woolen band was strapped on top of the top part to keep the snow out from the shoe during winter times. To my best knowledge these were used until the 1930s before "better" modern shoes replaced them.

I have retraced these from Osmo Vuoristo's old study from 1954. The left one originates from Kuortane, while the right one is from Ikaalinen. The top part is the same for both shoes.