While reading the forum I've noticed that some of you have an interest towards the Finnish culture and bushcraft. One of the perks living near the National Library of Finland is that you've access to every single book ever written in Finnish. The following writing is my understanding of the topic and is based on several dozens of sources. For that reason I have not included a list of sources at the end but I'm ready to sent a full list of sources to anyone if needed.

"Traditional" is my definition of things and matters typical to different parts of Finland hundreds of years before Swedish and Western European influence started to penetrate to inner part of the country during the 1500s and 1600s. All of the photographs and drawings are from Suomenmuseotonline.fi service if not otherwise noted.

Fire
The only primitive technique I've seen records of is the fire plow which was used with the slash and burn until 19th century as a fire started from the plow was though to be sacret by some. A fire striker from 1100s and 1200s to 1800s was either an oval-shaped piece of steel or a bow-shaped one. Typically it could been found hanging from person's belt from a chain. Tinder was made from Fomes fomentarius and was kept in a leather pouch.

Clothing
The oldest domesticated animal remain (cattle) in Finland is carbon-dated to 1300 BC but we can assume that sheep was also known in that period. Oldest piece of (wool) cloth is from the beginning of the 4th century and from that on all evidence show that wool was preferred during the winter as was linen during the summer. Pictorial or literal evidences are scarce before the 1700s but they show that people wore tunics and long trousers until the Western fashion was introduced during the 18th century. Hooded outfits were preferred by seal hunters and hunters.

Belts made out of moose were popular people living in more remote areas. As stated before a leather or birch bark pouch was attached to the belt. Typical width was around 1 - 3 centimeters. Belts were also usually decorated with ornaments made out of brass or other metal. Although it is nowadays popular to hang a kuksa (Guksi in Northern Sami) under the belt, the Finns did not use such devices but made a simple lippi from birch bark and a piece of stick.

Footwear of leather and birch bark were used during winter and summer, respectively. The oldest and most simple type of birch bark shoe ("löttö") is made from two or three strips of bark. The literature do not tell when these birch bark shoes were invented but oldest findings are from 1200s, I think. Leather shoes belonged to the "moccasin family" familiar to both boreal and arctic areas. These were usually made from two different parts and went up to the ankle.

Fig. 3. A hunter from the seal of the city of Brahea from 1669. Notice the axe on the right side and puukko on the left.

Puukko
Traditional peasant puukkos do not have any kind of bolsters but the tang is fitted inside a block of wood. Kalevala speaks of a handle made out of curly birch and most of the Medieval and older puukkos have a handle made from that wood. The oldest puukko preserved with birch bark handle is from 1831 but the technique is probably much older than that. Originally puukkos were attached to the belt horizontally but the fashion changed to vertically during the Middle Ages.

Wow - excellent information!
Many thanks.

Great post! I cant believe the strikers-they look in great condition considering they are over a thousand years old!

Thanks for the information you provided, interesting to see the history from other peoples past. Also interesting to see your ancestors used Fomes fomentarius as their main tinder, i've often wondered who was the first person who discovered the horses hoof fungus could be processed into amadou and how it came about. Its not something that happens by accident, scraping all the outer layer, slicing the 2nd layer, mixing in a lye solution and drying.....

It all rounds out the North Western European cultural record.
Those Winter boots look eminently practical, I'm going to make a pair of them

Thank you for sharing the information

I think a lippi is a cup. - RM makes a cup just like that in a video of his.


I am often intrigued to know what metal they used for strikers back then. It is obviously not high carbon stuff like today. - Case hardened??

Great post Martti, very interesting, thanks for sharing it

Everything Mac said:
I think a lippi is a cup. - RM makes a cup just like that in a video of his.
Click to expand...

Cup, ladle. Quick and handy, leave by a spring, use it for drinking when you for some reason don't have your regular kuksa with you.
M

forestwalker said:
Cup, ladle. Quick and handy, leave by a spring, use it for drinking when you for some reason don't have your regular kuksa with you.
Click to expand...

That is right. It is a makeshift drinking cup that is much lighter to carry around if needed but also easy to make in situ. As I mentioned in my previous text, Finns did not use kuksa-like cups when travelling but used a lippi if one was left near a lake or a spring by previous traveller or they made one.

According to lenghty study made by Niilo Valonen (called "Geflechte und andere Arbeiten aus Birkenrindenstreifen") the so called "birch bark culture" in Nordic countries is concentrated to Finland and Lapland. Most of the items made in Sweden and Norway show signs of influence from Finnish immigrants and most of them are in fact made in such areas where they immigrated during the 1600s and forward.

The more prominent items made out of bark are probably all kinds of containers and bags. I shall try to introduce them from the smallest to the largest and from the simplest to most complicated.

Fig. 8. A simple frame backpack similar to one what Ötzi used.

Fig. 9. A quite typical pouch made out birch bark and which could be attached to the belt or just use as it is.

Fig. 10. Kontti is perhaps the most complicated of these to manufacture and requires tens of meters of birch bark strips to be complete. However fish and other foods that might suffer from excess moisture during the walk back home from the wilderness were easily preserved in kontti.

What a top thread, thank you Martti for sharing with us.
J

i tried googling lippi to see more images and how to make them not much luck i just get Italian football!

johnnythefox said:
i tried googling lippi to see more images and how to make them not much luck
Click to expand...

In form, it's a circle folded in on itself to form a cone ~ the stick clamps the fold together.
M

johnnythefox said:
i tried googling lippi to see more images and how to make them not much luck i just get Italian football!
Click to expand...

Lippi is made by cutting a circle out of birch bark, about 15 centimeters in diameter should be fine. Make a fold extending from the center to circumference and then attach the stick to it. 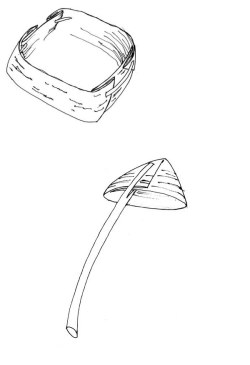 Since I have described what a traditional puukko looks like, I though it might be interesting to also know what a traditional axe is made of. To my knowledge there has been only a single prehistoric axe finding where the shaft was somewhat intact. The shaft was made out of European Ash, but all traditional peasant axes have a shaft from birch. An axe is to a Finn what leuku might be to a Sami.

A birch bark sheath, similar to the one made for puukko, was made to protect the axe from wear.

Fig. 11. Grave findings from Karelian Isthmus which was later dated to 1200s. From T. Schvindt's book "Tietoja Karjalan rautakaudesta ja sitä seuraavilta ajoilta Käkisalmen kihlakunnan alalta saatujen löytöjen mukaan" (1892) via Hathitrust.org. No. 43 is what is known as "Finnish straight-back axe" in Finnish literature. This type of axe was used from the 10th century onwards.

Fig. 12. Birch barch sheath for an axe. The more simpler one covered only the head.

Good thread, and very interested to see the flint strikers - which look very similar to mine, made in 2003.