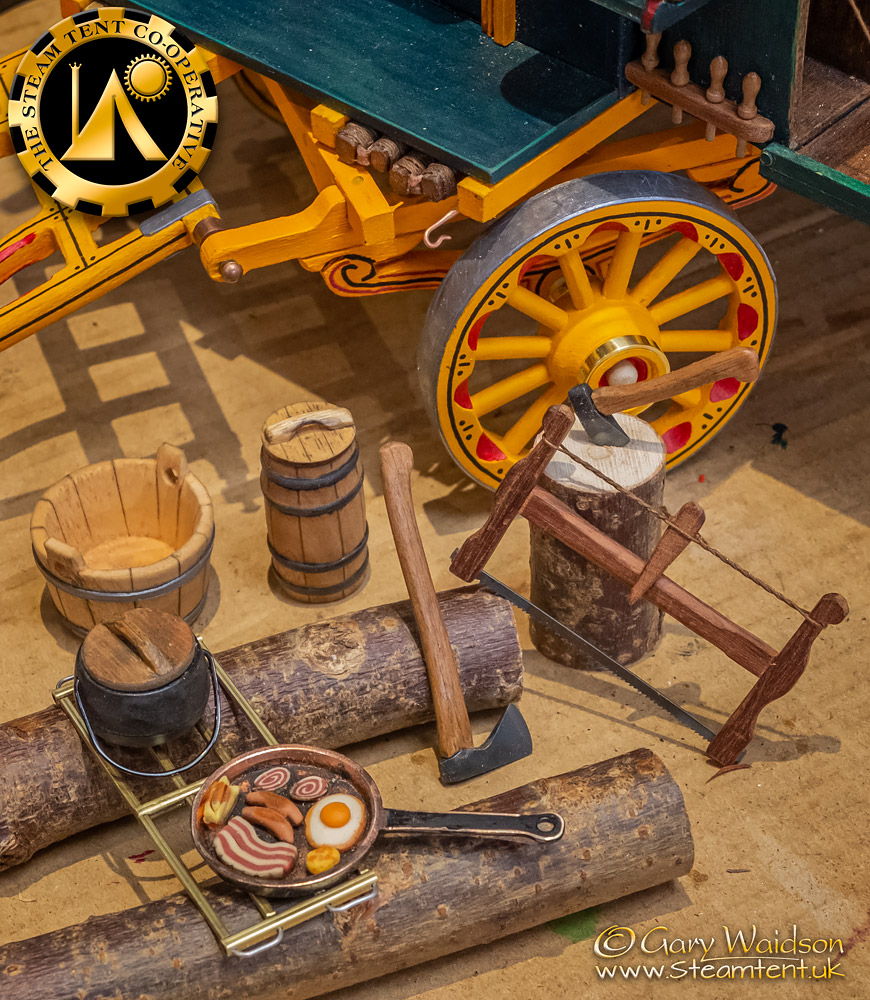 I recently posted up a few pictures of a model Gypsy caravan or "Vardo" kit that I was building in the Modellers Corner thread which probably passed most people by.

That kit is pretty well finished and I'm starting to work on the camp scene that will surround it now. I thought that might interest a few more people so I'm giving it it's own thread.

Ignore the cardboard backdrop, that is just the surface of my work bench, the idea is to build a glowing fire pit and it's environs but that will be a later stage.

I'm starting off with the tools and many of those are things we are all familiar with.

The grill was first, made from brass box section and held together with stainless wire. I was going to glue it all together for security but in the end the friction fit was good enough.

Next in line was the frame saw. I got the blade from a coping saw, one of many spares I had and using a bit of heat from a blowtorch, bent the ends to provide stops. The frame is recycled mahogany from a skip and a bit of linen thread for tension. The pieces were just whittled and sanded.

I couldn't resist making a proper job of the axes so I started with an off cut of 01 tool steel. I annealed it so that I could drill the eyes and they were made oval shaped with a diamond needle file.

I then roughly ground the shapes and cleaned them up on a belt sander before re-hardening them with emphasis on the blade edges.

Sharpened up on the whetstone I then polished the edge before tempering them.

The hafts were whittled and sanded again but I confess I didn't even try to wedge them so a dab of epoxy was used to secure them safely.

There's lots more to do before the camp is complete so expect a few updates as time goes on.
Last edited: Feb 18, 2020
Reactions: bopdude, Qwerty, tiger stacker and 5 others

Got to say I'm loving the development of the whole set, can't wait to see the final display
Reactions: Wayland and Toddy

Your going to need horsebrasses.

I've got the horse brasses, just need to make some martingales for them.

The horse needs some work on it. I'm going for a mechanical "Steampunk" horse as all the models I could find looked naff. I'll probably start on that after the camp. 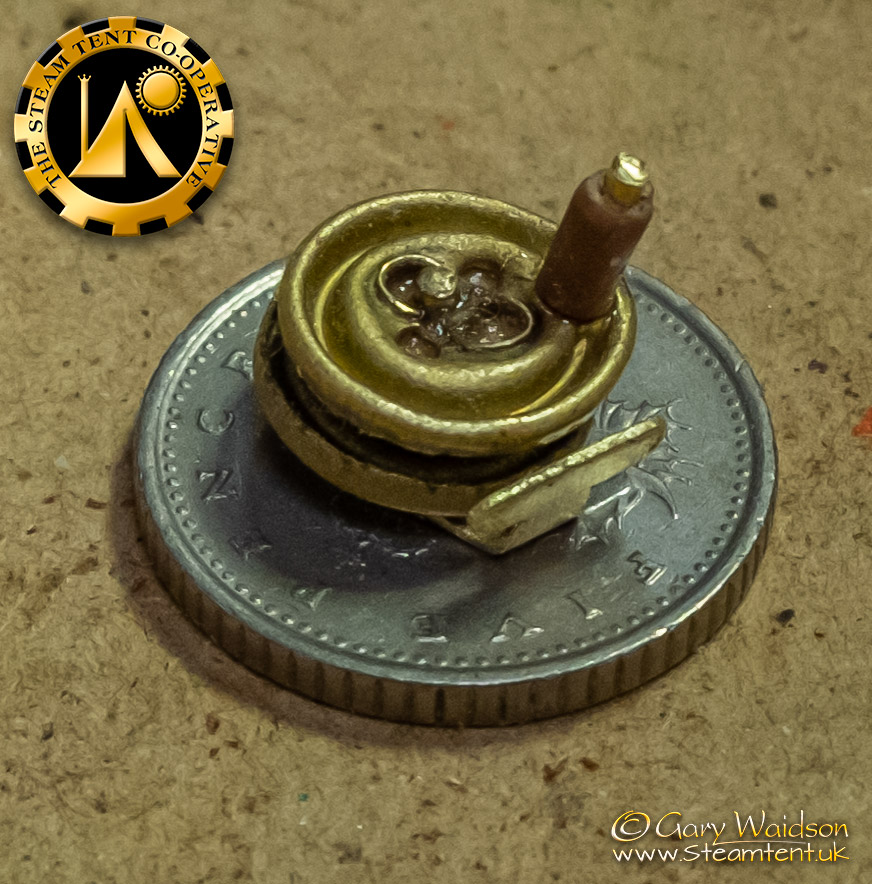 Currently I've just finished this. ( Sorry for the bad picture, my compact camera really doesn't like close ups at the moment. )

Buttons appear to be useful things. I have a tin full of vintage ones from my Mum’s house. These two are now serving well as a fishing reel. Guess what I’m making now?
Reactions: bopdude

I'm getting this weird mental image of it all displayed in a setting mounted inside its own full sized vardo. Then you could take it on tour!
Reactions: Wayland

Looking great! What scale is it?

I've been making 'stuff' for my granddaughter's doll's house recently and I too have found buttons a useful resource
Reactions: Wayland

I realy love this project. Adore the frying pan and bucksaw. Did you make the food or did it come ready made? Excellent project.
Reactions: Wayland

I saw a shepherds hut yesterday; a real one.

Didnt take pics, sad to say, I was too interested in the viaduct and lime kiln...
Reactions: tiger stacker and Wayland

oldtimer said:
I'm getting this weird mental image of it all displayed in a setting mounted inside its own full sized vardo. Then you could take it on tour!
Click to expand... 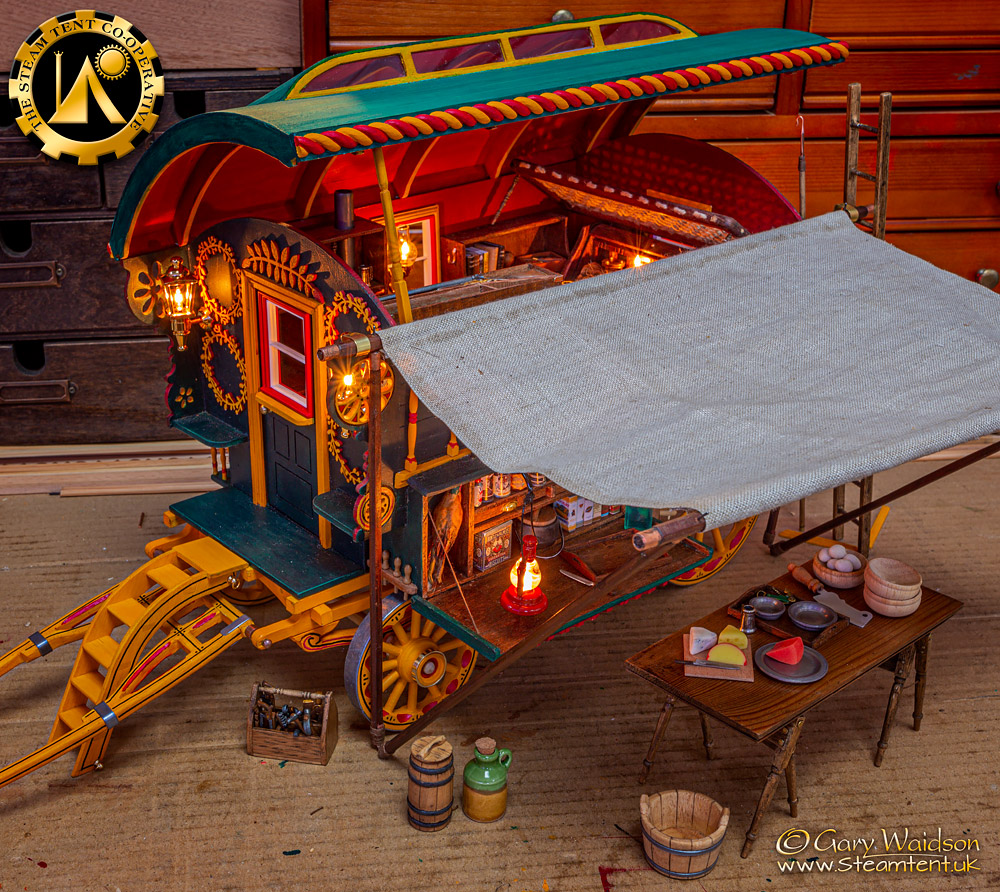 I am making it to be portable, with luck it should be on display at some of the Steam Tent Co-op camps.
Last edited: Feb 19, 2020
Reactions: bopdude and Corso

Broch said:
Looking great! What scale is it?

I've been making 'stuff' for my granddaughter's doll's house recently and I too have found buttons a useful resource
Click to expand...

It's 1/12th scale so probably similar to the dolls house you've been working on.

I like the fact that I can get a lot of stuff that can be adapted or improved.

Woody girl said:
I realy love this project. Adore the frying pan and bucksaw. Did you make the food or did it come ready made? Excellent project.
Click to expand...

The food in the pan came ready made but the pan needed colouring down a bit. The buck saw was a scratch build though.

As I mentioned in the Modellers Corner, I'm basically addicted to making things, I was always crafty as a kid and went the Airfix / Tamiya route in my teens. Making stuff was a big part of why I got into re-enactment and living history, I saw people living in a hand made world with hundreds of things that needed making.

I make or modify much of my outdoor kit and the Steam Tent Co-op stuff is usually tinkered with as well.

The big problem with making all this stuff is the space it takes up, we are struggling to find places to store it all. 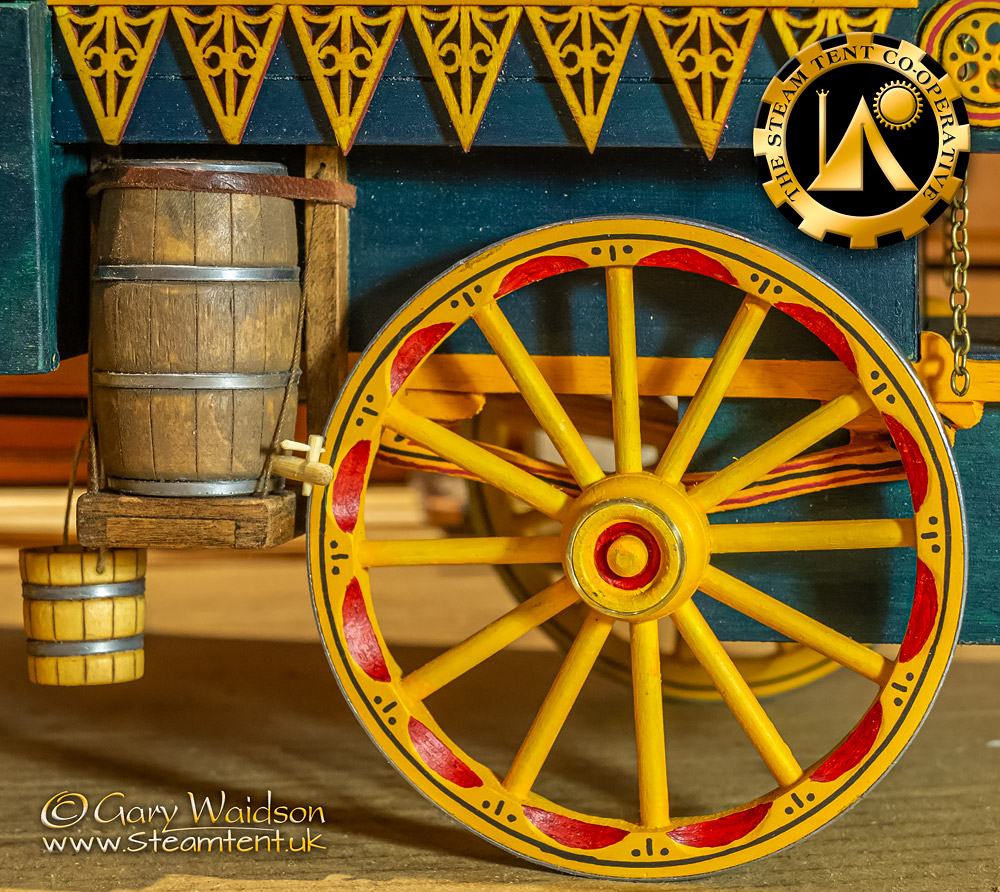 At least model making allows me to feed that addiction without taking up too much more space.

This is what the reel was for.

Three section fly rod which comes apart and will stand by the door inside the Vardo.
Reactions: bopdude and chas brookes 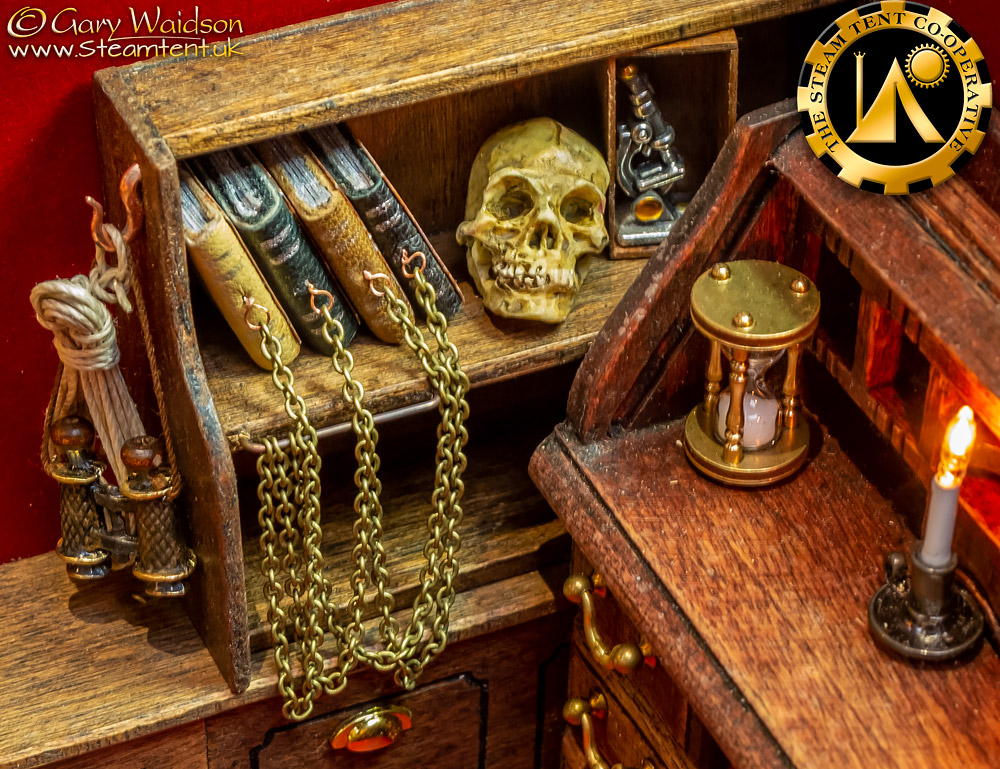 Watching "Game of Thrones" the other evening, I decided what I really needed was a chained library in the Vardo. ( Not that I don't like lending my books out you understand.)

Wire salvaged from old power cables and a bit of chain from a cheap pendant with two holes drilled into the shelf edge using a pin vice. The wire is not glued in case I want to add more books later.

One really needs one of those USB camera microscopes to appreciate it all.
Reactions: Wayland

TLM said:
One really needs one of those USB camera microscopes to appreciate it all.
Click to expand...

My current "compact" camera is playing up at the moment which makes it difficult to get the shots I would like.

I'm dropping it in for service tomorrow so hopefully the pictures will improve. 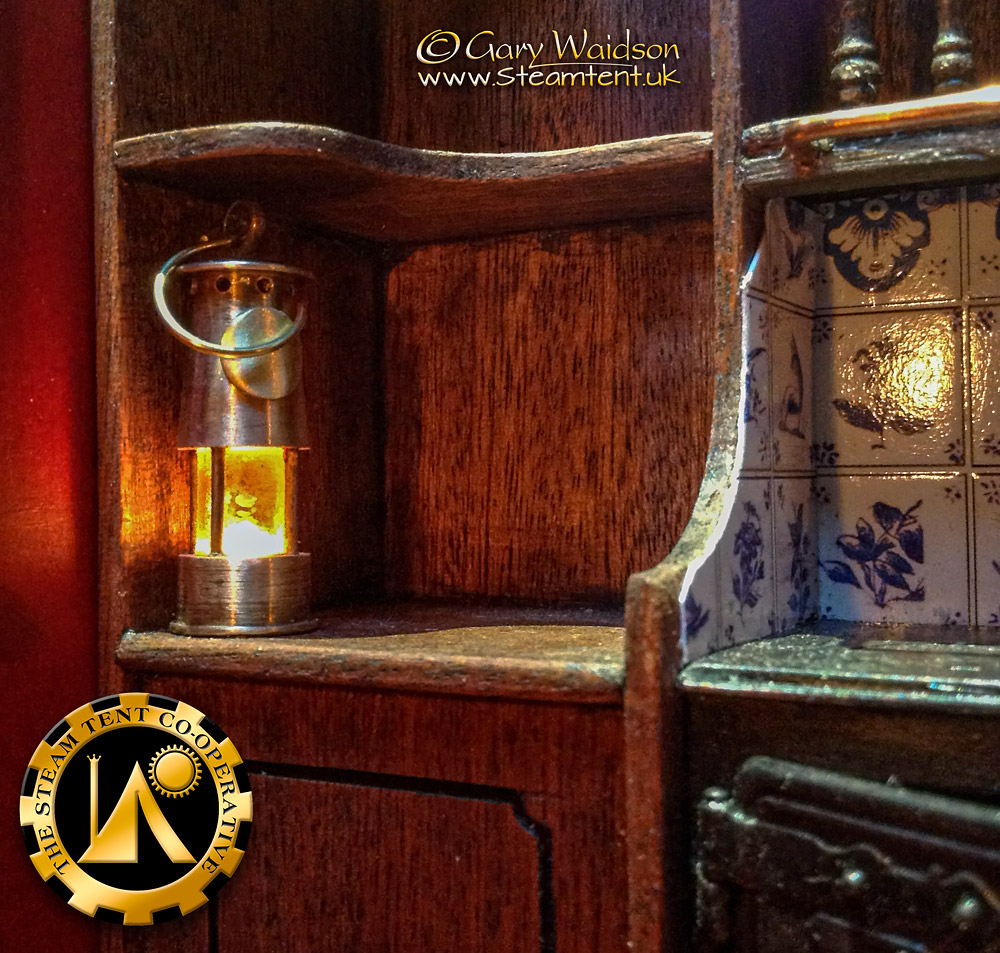 This miners lamp started life as a solid keyring.

I had to drill up through the base to insert a grain of wheat bulb and then drill out the vents, add the handle and the identity plate. It's wired in through the shelf.

( Not the best picture I'm afraid, my camera is off for repair at the moment so this is off my iPad.) 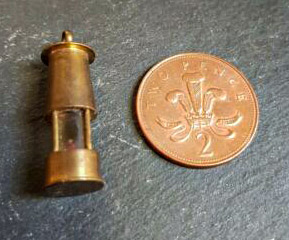 Oh, this is the original FleaBay listing pic so you can see the difference.

Your fishing rod inspired me to try myself. A little too much glue on the reel but that can be sorted. Work in progress but this is so far.