So as not to intrude on Wayland's post about the excellent little copper spirit stove, I offer a look at what I think is a later relative of his stove.
I would date it post copper pot, pre plastic era...

The stove is Chromed rather than stainless and has a braised/ soldered in brass bottom. Rather than a wick there is a wire mesh insert and I suspect something like Kapok or a kind of cotton wool like filling.

The pan handle fits onto a threaded stub in a similar manner to Wayland's pan and I note with interest the almost identical design of the pan lid and lifting ring. The pan handle is of an extremely hard, almost black wood (Lignum Vitae ? )

The top ring of the stove which is supported on three ornate turned Pillars has a recess into which the pan fits making it really quite stable and very efficient using Meths.

I get the impression it could be a later product of either the same company or a ' Civvy ' version of Wayland's stove for Posh campers. 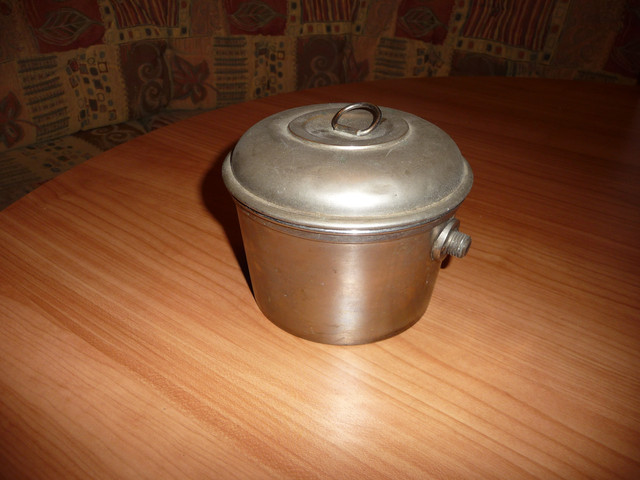 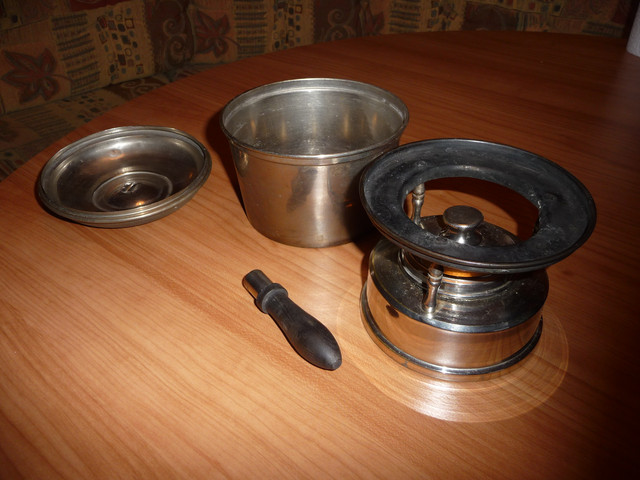 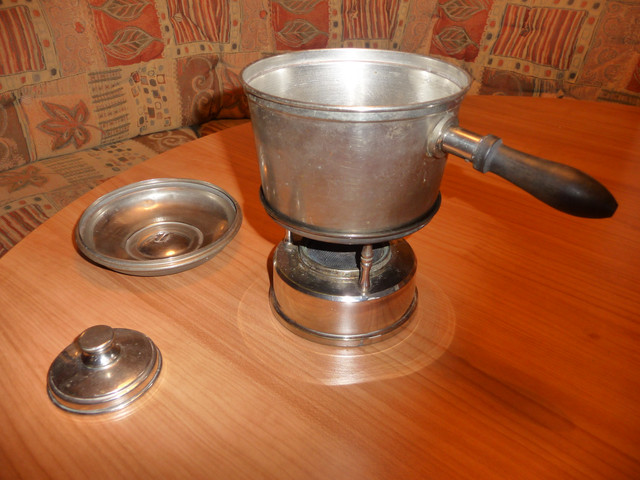 Interesting. There must be a whole family tree to be built up from some of these old stoves right up to modern Trangias and the like.

I have another one here.

The modern Trangias ( Trangia system) were invented in the early 1920's. A competitor to the much heavier and more expensive Primus.

Also high % alcohol was readily available in the countryside in Sweden ( illegal home made vodka), much more than Kerosene.

Most Primuses (and the similar Optimus) were used at home, to cook on. Many people in towns and cities had no kitchen as we have today.

" Does it work well? I guess it was mainly for home use."

Yes Janne, it heats up really quickly. That may be because instead of a ring of jets or wick, the flame tends to be like a miniature camp fire under the saucepan. The whole steel mesh opening in the stove top produces flames.

In view of the fact that the saucepan handle unscrews and every part packs into the saucepan, I'm guessing it was intended to be transported. A travelling stove or picnic stove I think. I can find no makers or other identifying marks on it at all.
J

Possibly. But remember, apart from the military, very, very few people did do 'bushcrafting' as we think about it.
for various reasons.

I was myself surprised that my fathers mom and dad had no kitchen, and no toilet in their apartement. A kitchenette and the main kitchen in the cellar, to be shared among the 4 apartements. One toilet with wash possibility on each floor, shared between 2 apartements.
(The helpers lived in small rooms in the attic area. Their toilet and wash room was in the cellar.)
And that was in a upper middle class abode.
They had a Primus in the kitchenette, so the domestic could make hot tea, coffee and warm soup and such.

The pans were sized so they all fitted into each other, and placed on a shelf. Copper.

Sadly that equipment vanished sometime during the last decade.

My grandad used to camp while fishing. Touring was a popular pastime in Britain too. Plenty of call for travelling stoves.

Possibly. But remember, apart from the military, very, very few people did do 'bushcrafting' as we think about it.
for various reasons.

I'm sure it was never intended for anything like Bushcrafting...

Once British people went...'Motoring'...it was fashionable amongst those well off enough to have progressed beyond the motorcycle and side car. Often it was to 'The Seaside' and it was not uncommon to stop beside the road and break out the folding table, chairs and tea making kit complete with portable stove, sometimes Primus or similar and make tea.

When I was a kid, the tradition continued even into the mid 1950's. Here we are, a group of us kid's on the way to the seaside, stopped beside the road... at tea time...of course.
I'm fairly sure tea for the staff was made on a Primus type stove that lived in a big biscuit tin with the kettle and enamel mugs...
I took the photo with a Kodak Box camera that belonged to a member of the staff (Children's/ Orphanage) Home.
The road must have been busy that day as we saw at least 3 other cars. I believe it is now a Motorway... 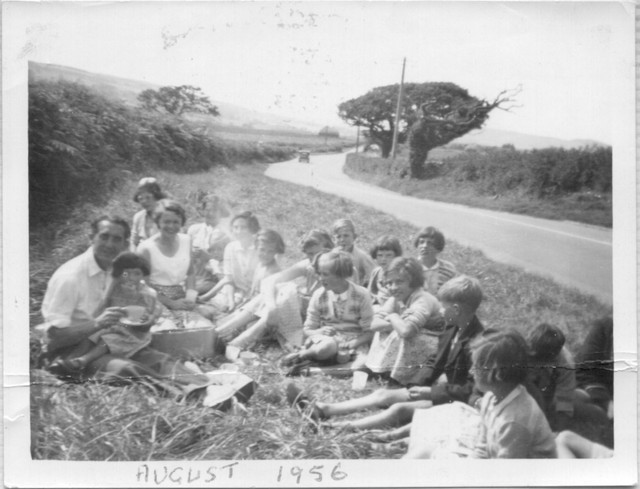 They didn't call it bushcraft.
J

For him it was a life style and choice.

The point is that camping and outdoor pursuits have been popular since Victorian times in this country. This was largely brought on by the "Romantics" movement but the outdoor equipment industry sprang up pretty quickly to support that interest.

Gentleman's outfitters were common and the "Army and Navy" stores were not just supporting the military, their catalogues and products were widely available to the public.

Stoves like these may well have been military in origin but soon became popular with travellers of all sorts.
J

Same all across Europe. But as the Industrialization started later, larger % of the population lived in rural areas for longer, and those people had not much urge to visit mother nature. They ventured into it to harvest mushrooms, berries, fallen branches, pine cones, and hunting/trapping.

In Sweden, industrialization started for real around 1870. Yes, that late. But then it took off. As the workforce movement into urban areas started that late, and continued well into the mid 1900's, many people still own the ancestral house/cottage in the country side. It was and still is a tradition to visit this place, usually situated in the forest or by a water somewhere, over weekends, holidays. .

The 'bushcraft' resurgence never happened in Sweden like in UK. Never vanished.

Granddad was from an old 'townie' family, but spent close to 10 years fighting in wars in Europe, then eventually married a farm girl.
We think his love for nature, which he transmitted to his son, my dad, and then down the next generations, stemmed from the mental healing he needed/felt spending time in nature.
Last edited: Sep 6, 2019
You must log in or register to reply here.
Share:
Facebook Twitter Reddit Pinterest Tumblr WhatsApp Email Link
Top Bottom