The law for England and Wales states:

139 Offence of having article with blade or point in public place.
(1)Subject to subsections (4) and (5) below, any person who has an article to which this section applies with him in a public place shall be guilty of an offence.

(2)Subject to subsection (3) below, this section applies to any article which has a blade or is sharply pointed except a folding pocketknife.

(3)This section applies to a folding pocketknife if the cutting edge of its blade exceeds 3 inches.
(my emphasis)

(4)It shall be a defence for a person charged with an offence under this section to prove that he had good reason or lawful authority for having the article with him in a public place.

There seem to be three ways to interpret this. The law says cutting edge, which could be Method B or C below, but most people (including the police and security) I have met would use Method A and measure "Blade Length". In discussions Method B is usually downplayed since it can greatly increase the "length" for blades with a lot of belly and people say it isn't used...anyone here say otherwise? 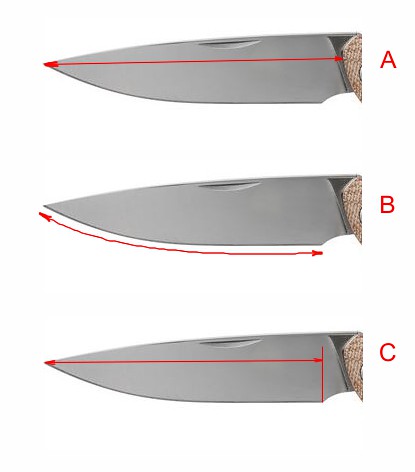 The knife pictured is sold as UK EDC legal.

I know that we have at least three police on here and would be interested in their view.

It seems like it is j..u..s..t legal (or will be after a sharpen or two), but I would expect to have a hard time with police if I were in a situation where it got measured.

I generally use method B to be on the safe side. It would only take one Jobsworth or anti-knife police officer to land you in trouble. And I'm not anti police by any means.
If it were my knife I'd drop the point a touch on the belt sander to make it legal.

Answering your three bullet points in order
- Looking at your measurements, then I'd say it was illegal in all cases since all three measurements are over 3" (even if just by a gnat's chaff)
- No
- No

When deciding whether an EDC blade is of legal length or not I play on the side of caution and use the longest measurement - be that A, B, or C. I can't see why one wouldn't. Look at the difference between the longest and shortest measurements - 5mm. Is that really worth taking a risk over?
I'm sure one could have their day in court and argue the letter of the law ('it says cutting edge, m'lud!') and I hope anyone who does so feels proud of themselves and enjoys the stress and anxiety of being prosecuted and having to defend themselves in court.
But, quite frankly, I've got better things to do with my life than try it on just for an extra 5mm on what is just a non-locking knife anyway.

If you're tempted by the knife because you like the look of it then I'd buy it and just grind off the surplus and reshape. I've done that before.
Last edited: Dec 9, 2019

IIRC they designed the law around the stabby bit, and depth of penetration.

So A should be the method of measurement
Reactions: Stew
C

I tend to carry smaller blades between 2-2.5" measured as youhave in diagram A
P

The answer is both, how long is the cutting edge on a screw driver ? The length on a folding cut throat razor with no lock and no point cannot exeed 3 inches. Screwdriver, nail file, tooth pick chopstick cannot exeed 3 inches, but where does the handle end and pointy bit start ?

In 45 years I have never been searched by the Police.
How many of you have?
Worrying about the minutia of a law that is not designed to target normal law abiding folk who happen to be carrying a knife seems pointless.
Reactions: TriggerRover and rmsmith

Unless you were caught brandishing it around a copper would most likely just confiscate it anyway. Don’t get too hung up on things to worry about a few mm

I know were aren't or were never allowed to carry 1 when working as door staff / bouncing, And we used to get searched more than the punters by the Police. that and if we needed 1 we'd just grab 1 out of the bin that we had to put them inside.
C

petrochemicals said:
The answer is both, how long is the cutting edge on a screw driver ? The length on a folding cut throat razor with no lock and no point cannot exceed 3 inches. Screwdriver, nail file, tooth pick chopstick cannot exceed 3 inches, but where does the handle end and pointy bit start ?
Click to expand...

nail file, tooth pick chopstick haven't been tested in court but I would imagine just like pencils and umbrellas they would use the same legal argument as a screwdriver


mikehill said:
Unless you were caught brandishing it around a copper would most likely just confiscate it anyway. Don’t get too hung up on things to worry about a few mm

As for security - the only legal precedence are courts and air-side and if its a legal but prohibited item they can refuse entry, you either surrender it or don't enter.

Other than that there are vague rules about public transport and 'dangerous items' and of course any private area can choose their own rules on admission.

and yes been stopped and searched a couple of times but only during heightened security situations - just after the 7/7 bombings in London for example.

To get back to your question Chris,
I've always thought of it as B or C, probably more B because i've focused on the cutting edge and not thought it meant all the way to the handle.....
T

The engineer in me wonders about method B, at which scale do we do the measurement, if not defined it might be done at a 100* magnification and one could get - at a guess- double the measurement done with a tape measure.

TLM said:
The engineer in me wonders about method B, at which scale do we do the measurement, if not defined it might be done at a 100* magnification and one could get - at a guess- double the measurement done with a tape measure.
Click to expand...

Maybe the way that you sharpen stuff...

If you are ever at the Moot you can attend a sharpening course that will allow you to keep your blade the same length all the way to 400x.

The blade length as in a svord may well be in excess of the cutting edge which (to me) implies that 'B' measurement is the standard.
How about a pizza cutter wheel?
T

Well, there are serrated edges ...

I always took it as A. Just seemed the most logic from a stabbing point of view rather than a a slicing as I assume that's the issue that is trying to be avoided.
P

I am with Stew on this one, the spirit of the law is to keep the blade length short. With B or C on their own you could in theory have a dagger with just the tip sharp.

If B and A are both less than 3" then you are covered.
Reactions: Stew
C

pieinthesky said:
With B or C on their own you could in theory have a dagger with just the tip sharp.
Click to expand...

I would always assume A. The logic of the law, if there is any, is the length it can easily penetrate, because that's how amateurs kill with blades, and we all know that. Why on earth they used the term 'cutting edge' is beyond me - it would be so easy to design and sell a folding knife with a 2cm sharpened edge but 10cm 'uncutting' blade following it, so measuring using method B and C would be ridiculous IMHO.
Reactions: santaman2000
T

In all the years I have been married to a lawyer I have learned 2 things, never ever discuss anything legal with wifey and the law and logic have nothing in common, no intersection whatsoever. On the third hand I do not understand the UK legal system so I really do not have an opinion on that. If used for stabbing A would make sense, if used for slashing none of those (it does not make a difference).
Reactions: santaman2000
You must log in or register to reply here.

Member Classifieds Today at 10:34 AM
kawasemi