You are using an out of date browser. It may not display this or other websites correctly.
You should upgrade or use an alternative browser.
J

They should last until next years harvest. They did not keep much of the food beyond one year.
Today we are eating stuff that has been stored for years. Flour, fruit, potatoes, veg, you name it.

Who knows what it does to us .

I think they were just made to last a week or a fortnight at most according to the social history books, I'll look it up when I have time.

Anyroad the weight of the biskits didn't drop at all over night in a warm dry kitchen so I'm assuming they are as dry as they are going to get, I vacuum packed two rations. 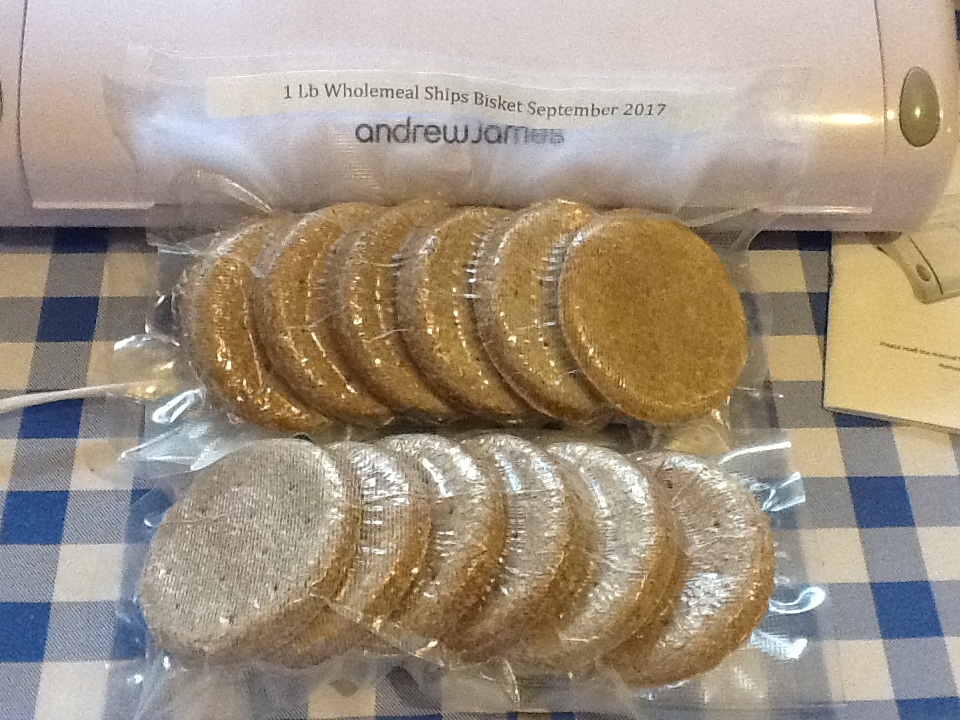 6 more are in a calico bag ( correction I had said linen ) hanging from a beam in the shed and I've brought down two to eat today. One I'll fry in best beef dripping, since that's what I've got, and the other I'll crumble up and add to some soup to see if it's worth doing.


Currently I have six Staffs oatcakes in the dehydrator on 40 degrees for two hours. After the first hour I swapped the trays about, flipped and rotated the oatcakes to even out the process some. At that point they were crispy in some places and still softish in others. They have shrunk about a quarter of a inch all round so far. 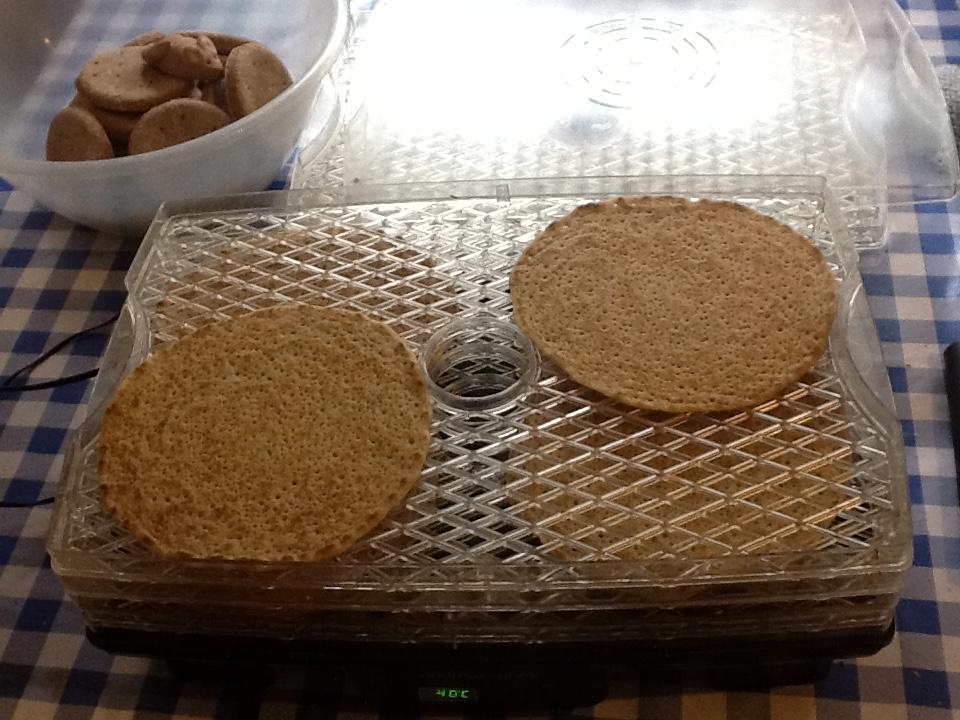 Oh on further reading I don't need to make biscuit cutter, back in the day one of the men's jobs on the production line was to break off two 1/4 lb lumps of dough and roll one with each hand into firm balls and flatten them so the next guy could use a biscuit press to put the ventilation holes into them ( that aided drying ) and in the case of arsenal made ones the government ownership Mark ( broad arrow usually) and the initial of the place it was made so it could be more easily traced back to source if stolen or found to be substandard. When the process became more automated under the Victorians cutters were used as you can see the distinctive marks, there was also a more towards square biscuits rather than round. If cut out with a knife, like you do on a tray of flapjack you are left with easily broken off sharp corners. In my experience rounded corners are easier to use anyway as you get less sticking.
Last edited: Sep 11, 2017

tombear said:
Well, that worked a treat, I put 10 biskits ( the most usual UK 18th/early 19th C spelling for the stuff I made ) on to two trays of her selfs dehydrator, set it got 70 degrees and 10 hours and left it to itself. When I weighed them just now they had dropped to 1.42 kg from the 1.63 they were yesterday so since I started with 1.5 of flour I think that will do me. I'll leave them over night to cool in the machine.
Click to expand...

That's great! Chances are they will last longer too since dried faster and at a higher temp.

If you're going to do loads, maybe you could get one of those knobbly rolling pins (do they exist in the UK? They're called kruskavel in Swedish) to speed things up. Like these ones http://www.swedishfood.com/kruskavel

Well that was different. I fried both sides of a biskit in beef dripping while I cooked some corned beef fritters in another pan. I just chucked one in with no preparation or soaking and left it until it was well browned. 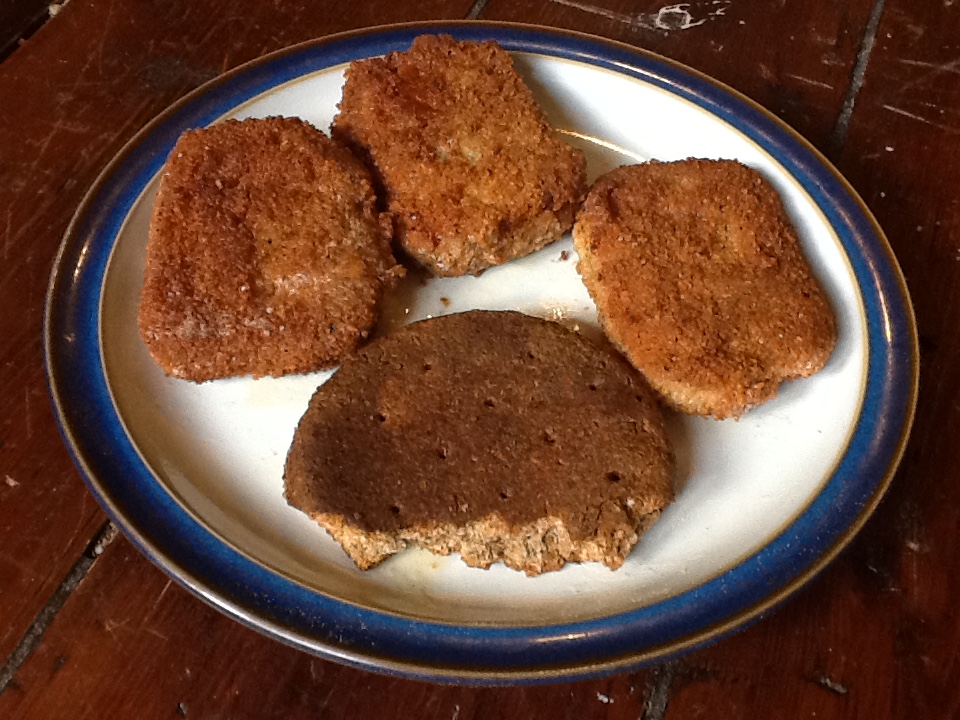 The fritters were excellent, I put pepper and mild chilli in with the bread crumbs which are stuck on with beaten egg, but the biskit did not soften at all! When I manage to nibble off a shard it didn't taste bad at all but to break off any big bits I had to whale at it with a solid beech rolling pin, I mean really belt it, harder than driving in a nail into hardwood!

Next time I intend to soak one before frying it, probably in some Bovril or oxo for flavour.

Once you get through the outer shell you can nibble at the biskit. Doesn't taste like anything in particular, just flour. Butter doesn't have any discernible effect on the hardness. I'll try to dunk it in a hot drink next.

'Eldest made me a mug of Bovril on arriving back to school muttering that I'm a idiot when I explained why and I've tried dunking the biskit and that works! It doesn't soften quickly and it's still quite chewy but it's edible and quite filling. Your not risking your teeth at least.

The oatcakes took 3 hours to crisp up at 40 degrees do the next lot I will try at a higher tempreture, checking and turning them at intervals.

tombear said:
'Eldest made me a mug of Bovril on arriving back to school muttering that I'm a idiot when I explained why and I've tried dunking the biskit and that works! It doesn't soften quickly and it's still quite chewy but it's edible and quite filling.
Click to expand...

That's quite good though, isn't it? You want some structure to it rather than a mushy mess.

Yup, I think when rehydrated they will still be able to be fried rather than just fall apart. I'll find out another day as I've eaten rather a lot today.

The crisp oatcakes were rather nice with a bit of butter and treacle. They also fit quite nicely into a plastic "Celebtations" sweet box for want of a big enough Tupperware box.

Lovely Grub Dec 15, 2020
TLM
T
I
Succeeding with Fire Plough in the UK