Broch said:
I can't believe it's two weeks since I updated on my progress!

Anyway, I'm down to those little jobs that seem to take forever. The inside has been completely panelled and painted, the floor has been laid and has now had two coats of antique oil/wax.

There's still a skirting and some finishing beading to put on. Plus, the window handles and locks haven't arrived yet; for some reason Ludlow Foundries stopped making the ones I originally wanted - the windows are held shut with some temporary bolts. I was thinking of painting the cross-beam and ridge but I've decided to stain them instead. Then, hopefully later this week, the log burner is going in (I'm still waiting for the corrugated roof cowl).

That's real progress. Sensible to wait for proper flue fittings - wriggly tin is a pain to flash. Will you tile behind the woodburner?

British Red said:
That's real progress. Sensible to wait for proper flue fittings - wriggly tin is a pain to flash. Will you tile behind the woodburner?
Click to expand...

Yep, I can imagine it is, and the place being waterproof is a high priority - that and rodent proof!

I'm putting a fireproof/insulating panel behind the burner. There's no way a stove can be fitted with 300mm type wall spacing in a small hut. Some of the commercial fits I've looked at have had about 10mm! - I'll aim for a bit more than that

That is looking VERY good indeed!

Looking forward to updates on this Broch.

TeeDee said:
Looking forward to updates on this Broch.
Click to expand...

Yeh, sorry - my build plans were thwarted by other people's needs!

However, I'm down in the wood tomorrow to get the log burner in place then, on Wednesday, I hope to get the flue installed.
Reactions: Redhand Jack

Broch said:
Yeh, sorry - my build plans were thwarted by other people's needs!

However, I'm down in the wood tomorrow to get the log burner in place then, on Wednesday, I hope to get the flue installed.
Click to expand...

Just saying I'm enjoying the process and am wondering how the internal design may turn out?

Modern , multi use and modular??

The idea at the moment is to camp in there initially to get a feel for space and where we want to put stuff. We'll use our camp beds and table plus the camp kitchen unit.

However, the current thinking is that I will build two single beds in the far end, away from the log burner, that can be bolted together as a double. We'll have a small folding table and two chairs next to the larger window and a simple work surface with a sink and gas burner under the smaller window. I'm going to put a small water tank (200L or so) uphill from the hut that I can fill from the truck and a soak-away for waste water. And that will be about it.

So, relatively basic and homely rather than 'modern'. There'll be an axe or two, oil lamps, book shelves, an enamel kettle/coffee pot on the stove and then whatever we feel fits. We have loads of 'steam punk' bits and bobs but I think we've decided we're not making it a SP den

Are you putting the log burner near the door? I hope you have an alternative escape route in case of unintended accident with it.
A thing that happens rarely but does happen.
Many years ago, I had a friend who lived in a converted horse box happily for many years, until his Woodburner dropped some un noticed hot coals on the wood floor, they had rolled off the hearth plate he'd put down to protect the floor. He almost didn't make it out, and got severely burned. It always makes me nervous when I see wood fires near the main exit door as his was.
I'm sure that it's crossed your mind though.
It's a grand job so far, and I'm deeply envious of your land, and your skills.
Love the project. Can't wait for the finished thing!
Reactions: Redhand Jack

Yes, with a door at one end (as opposed to on one side) it's the only practical place to put the log burner I'm afraid. However, both windows (half way down the hut) are capable of being used as an exit (the larger one particularly) and I have already bought a fire extinguisher that will be kept at the 'bed end' of the hut. You're right though, it is something that needs to be taken seriously in a wooden hut.

The burner I'm putting in has a glass door so there's less temptation to use it with the door open which, in my experience, is when all the spark and falling log problems occur.
Reactions: MartiniDave and Woody girl

I've fitted the log burner and installed the flue and carried out a test burn. I had to vacate the hut for a couple of hours to let it burn out as the place was unbearably hot!

Other jobs: made and fitted a step (why didn't I do that at the beginning? it would have made life a lot easier!), fitted the window handles and bolts, and a load of little finishing tasks inside and out - I don't think they'll ever be finished.

I've started clearing the site of all the debris so, as soon as I've finished that, I'll take some final 'outside' photos. 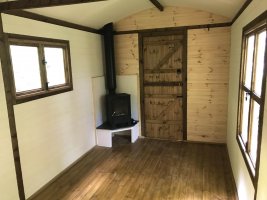 That's coming on a treat Broch!

I can only imagine the satisfaction you'll get, from waking up on a cold morning, knowing you've built the shelter around you.
M

Look marvellous!
Now, if you'll just let me know the "What three words" location I'll take up residence as a squatter!
You must log in or register to reply here.