I've been seeing a few mushrooms appearing recently, particularly boletus and amanita species so I thought with all the rain the one thing that will be doing well are the shrooms. So I headed off to a public but slightly lesser known wood (mainly due to the lack of parking and crossing a bunch of farm land to get to it).

It was absolutely slammed with mushrooms. It didn't seem to matter whee we looked, open grassland, on old logs, under pine or broadleaf, the place was littered with them. I don't know if this is a product of my foraging education over the last year or so but a lot of species were edible ones too, which has never been or seemed the case in the past. 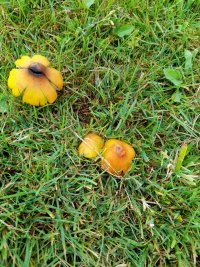 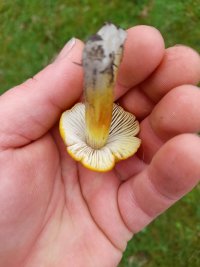 Anyone any idea what this beauty is? It looked fluorescent! 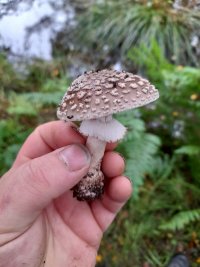 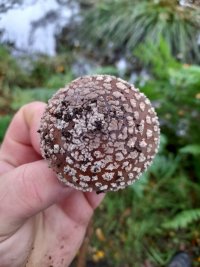 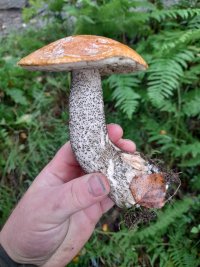 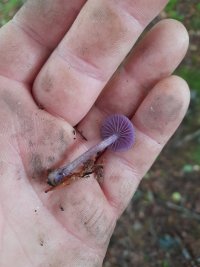 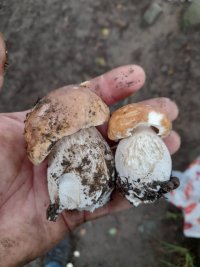 The aforementioned penny bun, absolutely chuffed with these. Found five in the end, looks like I'll find a few more coming out over the next few weeks. They were all under very large beech. 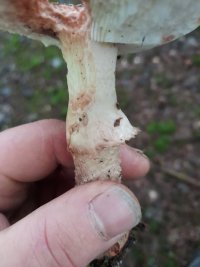 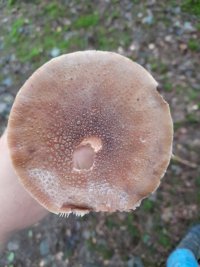 Blusher. Note the lines on the skirt this time, and the giveaway pink tinged on damaged areas. 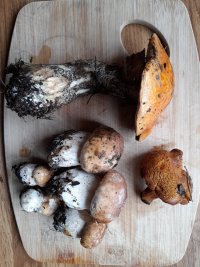 There were loads more too but I don't want to bung too many pics on here, it was insane just how many there were. Too many times in the past I've felt a little late on getting out after them, so if you fancy giving it a go, no time like the present and all that.

Had another little bimble upto the same wood last evening, no porcini showing but there were a few fly agaric showing and managed to bag some orange and brown birch boletes which are drying in the oven as we speak... 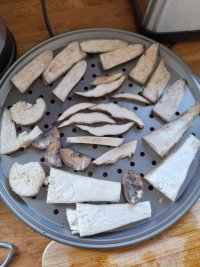 Kind of making me hungry 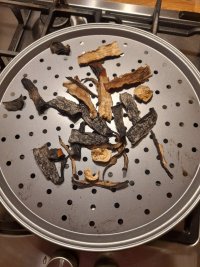 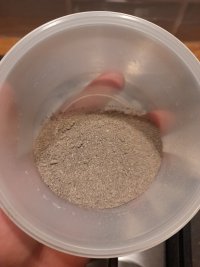 Not much left of them but a little taste test tells me there's a lot of flavour in that powder. Wondering the what the best recipe is to show it off... maybe in the dry mix of a simple flat bread?

I find dried mushrooms awfully good in soup and stew. Enriches a pie filling too

Mind the thread about using up too many courgettes ? The mushrooms work well in the baked recipe as well.....the one that can be done in a covered frying pan....which also works really well if set at the edge of a fire when out
Reactions: punkrockcaveman

It's definitely high season for mushrooms. Yesterday I found chicken of the woods, frying a small amount up and giving it a taste test to see if I had any nasty reaction. Fast forward a day later, no bad reaction so I went to grab a bit more; 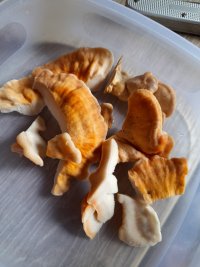 Later in the day we came across a stand of big ol' beech trees and found a couple of semi-decent penny buns and a couple of hedgehog mushrooms too, a first for me. 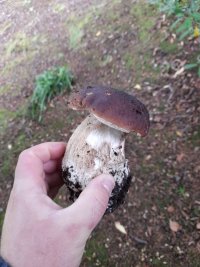 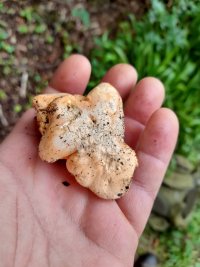 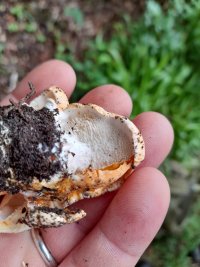 After chopping them up finely and frying off some spring onion and a single slice of smoked bacon they were tossed in the pan for 10 mins then thrown in some beaten eggs. Tasted great, the chicken of the woods has such a good meatytexture, the penny buns have an amazing flavour and the hedgehog fungus is a drier, firmer texture, kind of like an olive I guess, really nice. 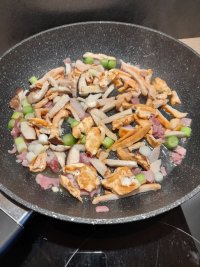 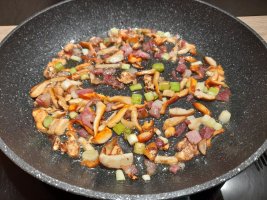 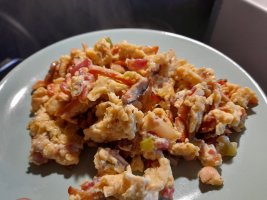 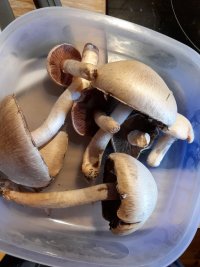 Another nice find today, field mushrooms. Another first for me. No yellow stain, just a slight pink tinge when cut, so a few were chopped and tossed in a pan with a slice of bacon and a spring onion on a bit of toast. Lovely! Just like supermarket button mushrooms. 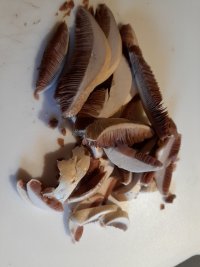 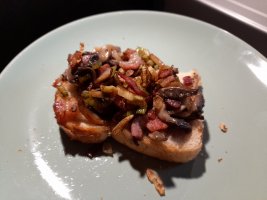 Yet again a great week for mushrooms, at first I thought these were penny buns, but I'm thinking it is more likely to be a close relative, pine bolete, as they were surrounded by pines and only a few immature birch 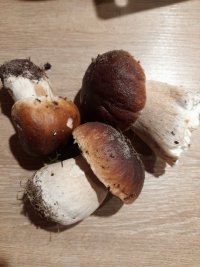 Another great haul by the looks of it. I’m sure you already are but remember to leave a few for “reproductive purposes” too!
Reactions: punkrockcaveman

FerlasDave said:
Another great haul by the looks of it. I’m sure you already are but remember to leave a few for “reproductive purposes” too!
Click to expand...

Have done and will do there were a lot that had gone past best, definitely plenty of spores left to reproduce!
Reactions: Nice65 and FerlasDave
You must log in or register to reply here.

Tracking in the Snow - picture heavy