I’ve received a few questions lately about how I work with leather and I haven’t talked much about it because I think there is already so much good stuff out there already but I thought I would post this up because I've not come across anyone else that sets up their thread for leather working quite the same way as I do.

Most people I've shown this to have adopted the system and it works very well for me.

It uses thinner than normal thread and avoids some of the pitfalls normally encountered while working. 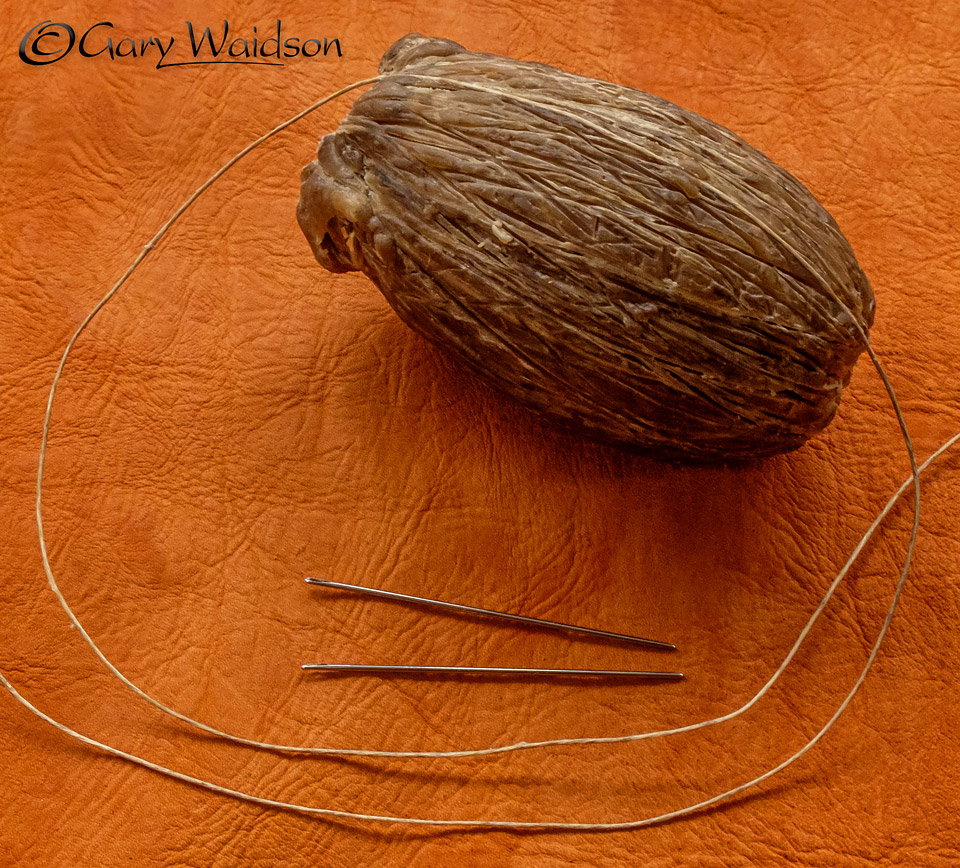 I use fine untwisted linen thread about half the thickness of the final thread I need.

To wax it, I draw the thread across a lump of beeswax several times until it is well coated and feels a bit stiff.

The needles are the finest I can get that will take the thread.

I normally prepare up to 4 meters of thread to produce a 2 meter working length. ( One meter per needle which is as far as I can reach.) 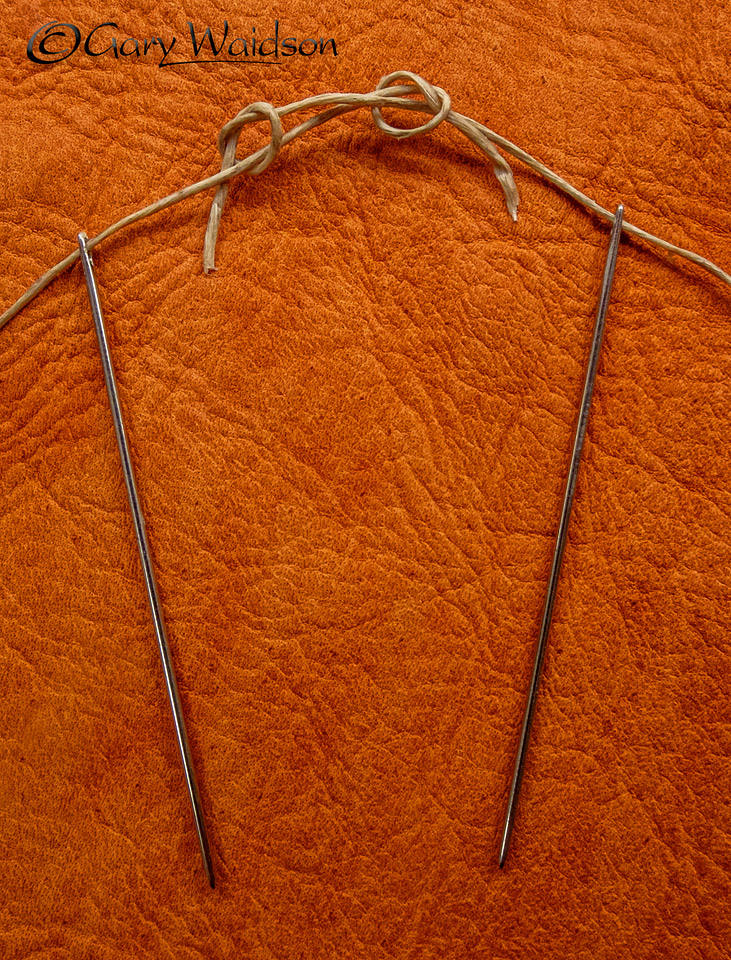 Thread a needle at both ends of the thread and then tie the ends together so that you have a continuous loop of thread.

I usually use a fisherman's knot because it doesn't tend to slip with the wax as other knots often do. 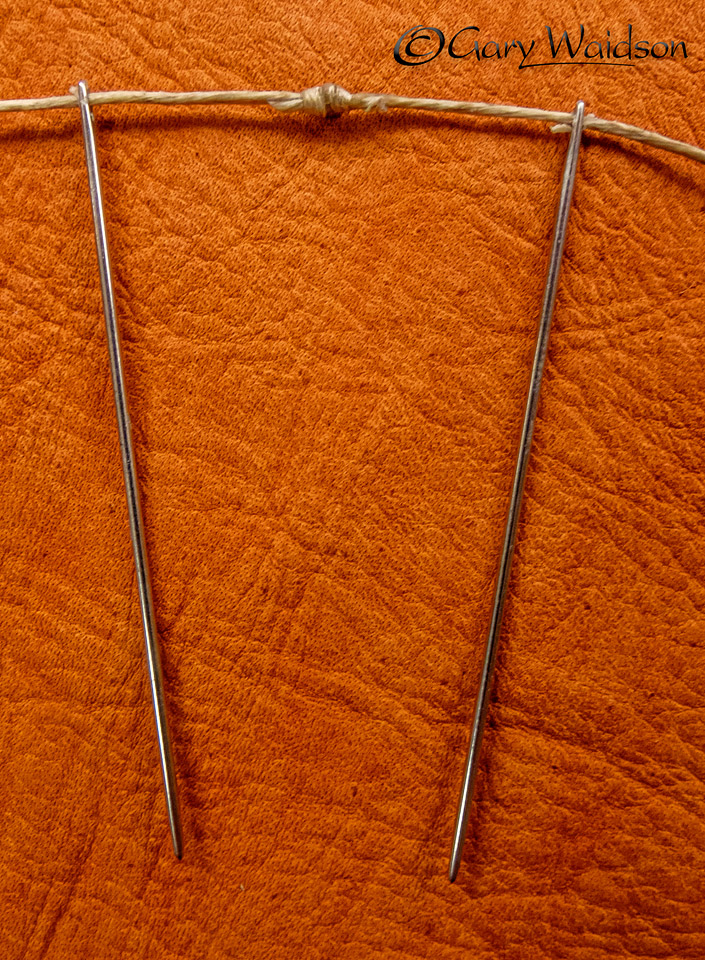 When the knot is tightened and the ends trimmed off you have a very compact and neat knot. 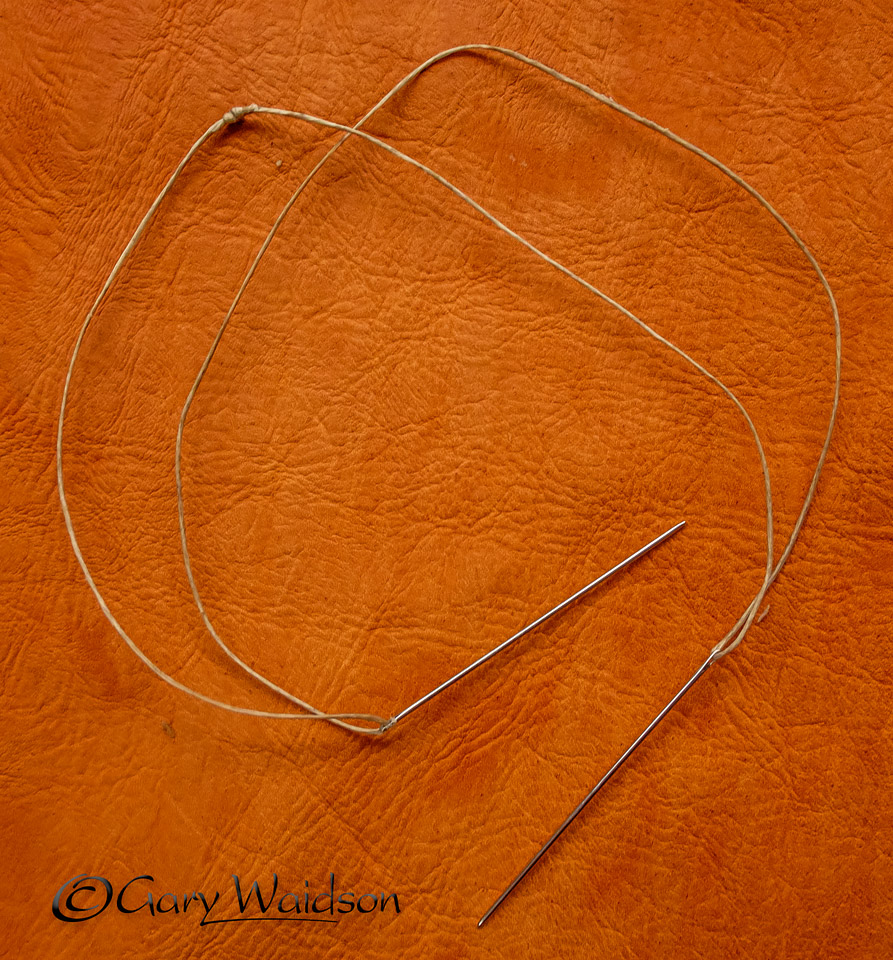 Now stretch the part of the loop with the knot out and catch the opposite end of the loop and bring them together.

( This loop is much shorter than I would use just for illustration purposes.)

Pinch the knot and the far part of the loop together and draw the needles down to the bottom of the loops created. 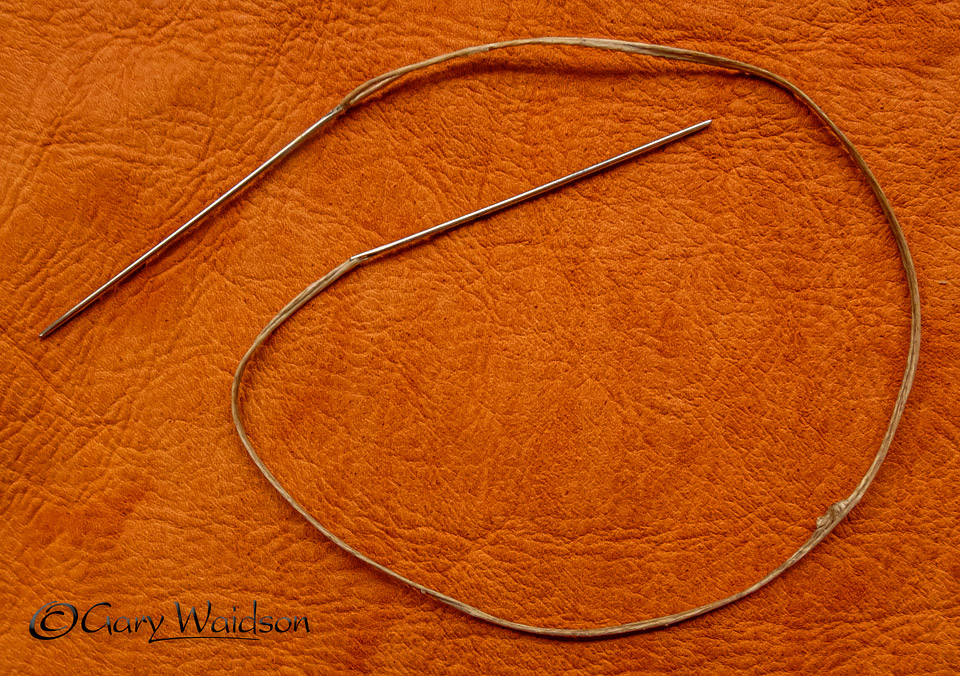 If you run your fingers along the thread loops from the needles towards the knot the wax should stick the thread together somewhat creating the full width thread you are going to use. 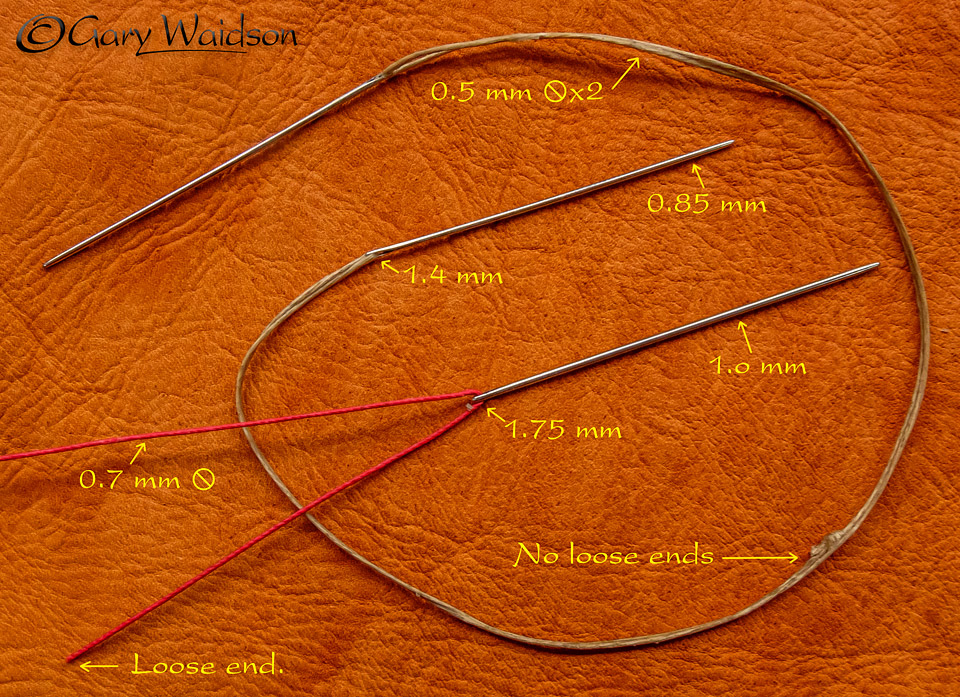 I'm not very conversant in thread guages and needle sizes but these measurements were made with a simple slip test in a micrometer to give you some idea of the advantages.

The red thread is a much more conventional leather working thread from Barbour I think.

The natural coloured thread actually delivers more thread through a smaller hole which makes stitching much easier and because there are no loose ends you don't have to worry about the needle coming off the thread.
Reactions: MartiniDave, Bishop, chas brookes and 5 others
B

Very interesting. Do you use this method for all your stitching? With having 2 threads per needle, how does it look with a saddle stitch? 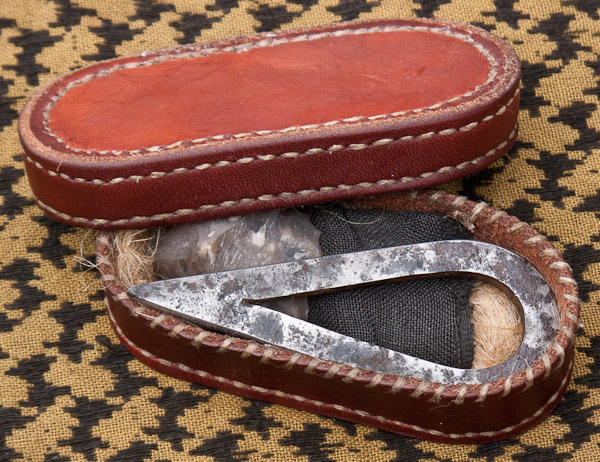 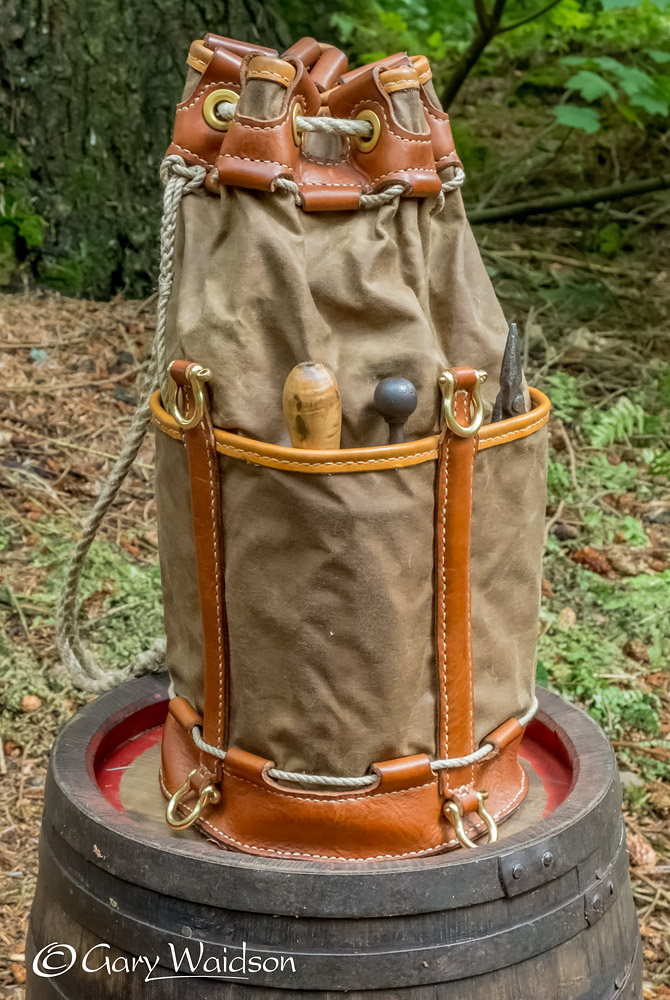 Yes, I've been using in for years.

Possibly because of the low twist on the threads they tend to act as a single thread. A bit like artificial sinew does.
Last edited: Jul 21, 2020
Reactions: B.L. craft, MartiniDave and gra_farmer

Nice one! this is exactly the set-up that I use for "leathering" a wire eye splice. This is always done with the Baseball stitch, except I start from the centre and work towards the ends and I find it easier to keep the twin strands parallel, if they're drawn over a thin screw drive until just before drawn tight.
In saddle stitching, a diamond shaped awl will help keep the lay but it's an inevitable part of the process that twists will happen and they'll marr the appearance, unless counter-twists are made for every stitch, just a twirl of the needle really.

By golly, I do like the ditty bag...the build quality and substance looks as if it would easily cope with a direct hit from a twelve inch , HE shell.
Regards
Ceeg
Reactions: Wayland
D

Nice one, so far any leatherwork Ive done has been fine with copper rivets and stitching mightmake it better.
Mostly a carpenters rig that holds my carpenters bags with leather braces (think the Yanks call em suspenders but not the nice lookin ones).
Look for Occidental Leather products, theres money on that game.

So much that I wasn't going to pay for the braces and belt, easy enough to make.

Knife sheaths on the other hand look better stitched and I doubt copper rivets will cut it.
Reactions: Wayland

Thats a very interesting way of doing it. I might try that some time
Reactions: Wayland
You must log in or register to reply here.

D
Bit of leatherwork for.. well...work.

Leather Craft_Show us what leather goods you have made past & present

DIY and Traditional crafts Today at 7:40 AM
pwb