As copied from my blog.
Apologies for the large pictures!!

During my trip with Odd we decided to try and get a real fire going, despite having brought cooking sets. Lighting a fire in the fjäll or mountains was an absolute new for me. The conditions in case up there were wet, windy and just below the treeline. It had been raining plenty in the previous period up until the day before and everything was really soaked. 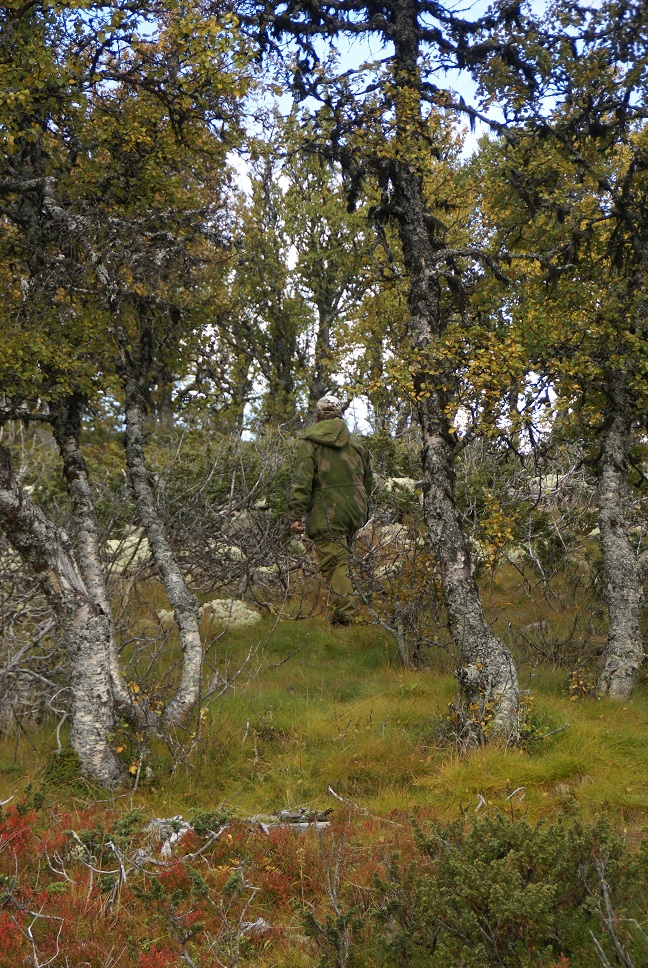 We found a spot on the lee side of a small canyon or crevice and there were plenty of stunted trees and shrubs growing there. So we set out to find some material to get a fire going and keeping it that way. The first thing I always look for is birchbark. Preferably the one that is already peeling away as it tends to be drier already. I found a birch that had broken off and sure enough there was bark. So I took some pieces, scraped them clean from moist rotten wood on the inside and soaked lichen on the outside. Lichen literally was everywhere!! And it holds moisture like a sponge, so you want to get rid of it! Then the bark went into my thigh pockets, so that it could dry as I was looking for more.
Then we proceeded gathering firewood. There were mainly birch and juniper. Like I said there was lichen everywhere and especially the birch branches were covered in it. So I considered those to be less of an option, except for a few that had broken branches on them. Those were more exposed to the wind and felt less wet to the touch.
The juniper on the other hand had a lot of upright branches and quite a few of them were bare; no bark and no lichen. Still they felt a little damp, but I figured that they would dry rather fast and that the inside would be dry anyway. So we gathered a bunch of those in several sizes. 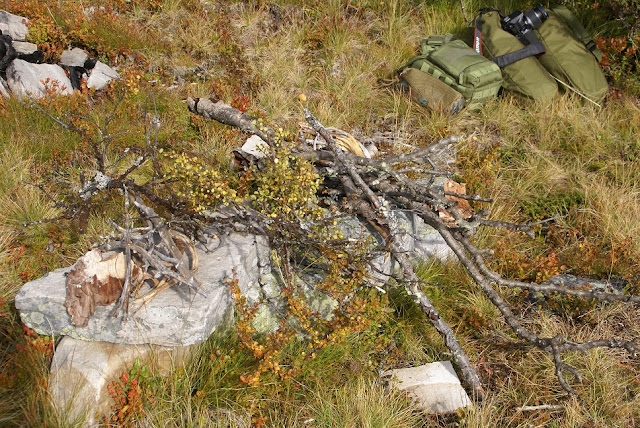 I then started preparing the wood to get a fire going. I started by stripping off the bark and anything feeling wet. Each branch and twig was then placed on a flat stone in the sun and wind to dry out as much as possible. This combination really did work! Temperatures were pretty nice and the constant wind dried the wood pretty fast on the outside.
I then proceeded making what is called feathersticks, meaning shaving strips of wood from the branch, s that each strip curls up. Making them thin enough to catch a flame is the goal. I was moderately successful at that, since many a shaving came off, but I managed to get a few with relatively decent curls. These too were placed on the rocks to further dry.
The next step was to split the smaller branches into halves or quarters, thus exposing the dry inside and let those dry as well. The final step was to take some of the bigger branches, break them into useable lengths and carve them up to, creating course "curls" so that they would dry a bit faster too. 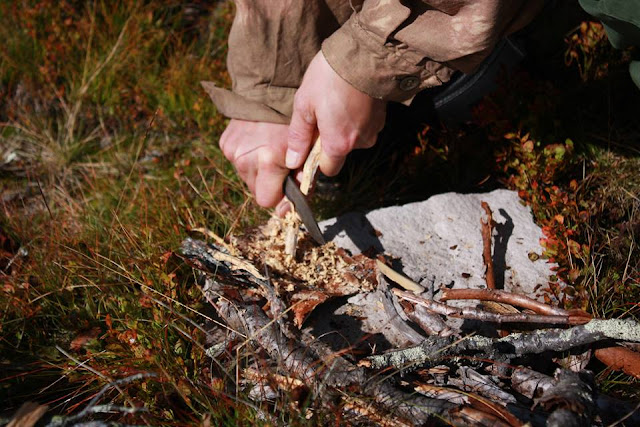 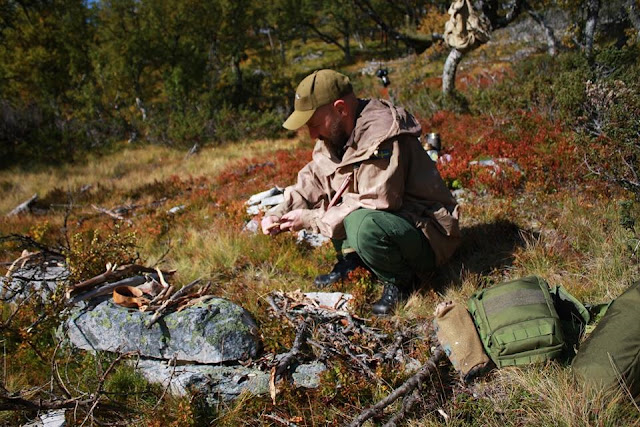 If you find juniper, you can use them bark and the wood itself to create very fine curls, almost dust by scraping them with the blade of the knife or a stone at a 90 degree angle. When dry, as when using the insides you could ignite them with a firesteel. I however had forgotten mine at home, so I used this dust at the very heart of the fire to be.
I usually build a tipi-style of fire instead of a pagoda-style. Why? This way I think that the wood is exposed to the flames to maximal effect and when burning, the ashes and embers fall into a pile, creating a hot, glowing heart, which retains its heat better. Also the wood collapses onto the heart adding more heat and fuel at a concentrated spot. Others use different styles, but this has worked for me thus far.
I start by laying a "floor"; a layer of wood on a wet underground or on snow or, in this case, a sheet of dry bark on top of the soaked coal. By reusing that coal there will be more heat, once it dries out, reducing the need for additional wood. On top of that sheet comes the juniper"dust" which I had collected there in the first place. Then some strips of more birchbark, next a layer of thin strips of wood like the mentioned quarters, making sure air can pass through and between each layer and then some bigger pieces; the halves.
Now because I had forgotten my firesteel I used matches; one to be exact, carefully shielding the flame from the wind, keeping a close eye on the development of the fire. I had to assist by blowing on the glow a few times, when the flames died out, but in the end....... 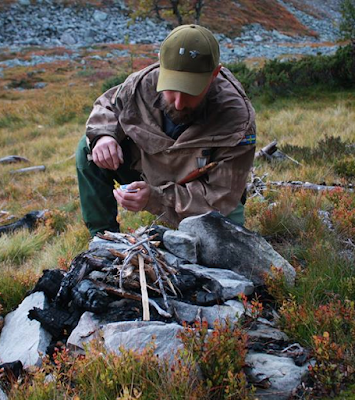 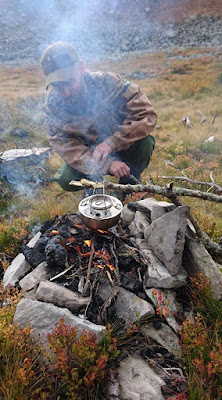 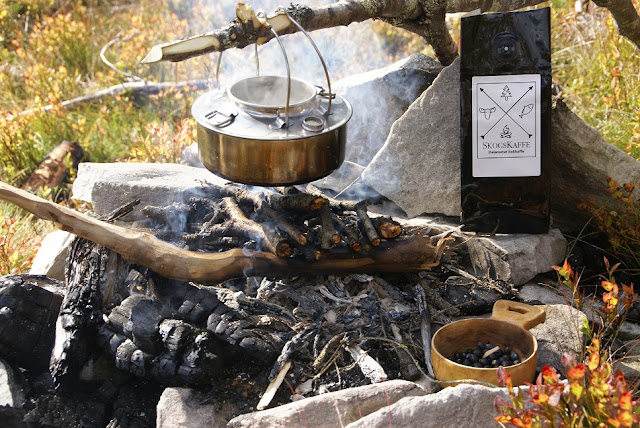 There is one other issue I would like to address; in wet or damp conditions I do not like to put my pack on the ground. The reason might seem obvious; it gets wet that way. But there is another issue; when roaming about in unfamiliar territory or when focused on other things, like foraging or collecting wood, it is easy to lose track of where your base site is. What I prefer to do is to hang up my pack whenever possible. Keeps it dry and clean, but is also helps finding your base again!!
You can see how Odd's backpack blends very well, as it is supposed to (military origin) and when standing a bit further off you might just pass it by and not see it at all.
Even in a wooded area with a green/camouflaged pack, hanging it would make it far easier to spot it and thus find your way back. 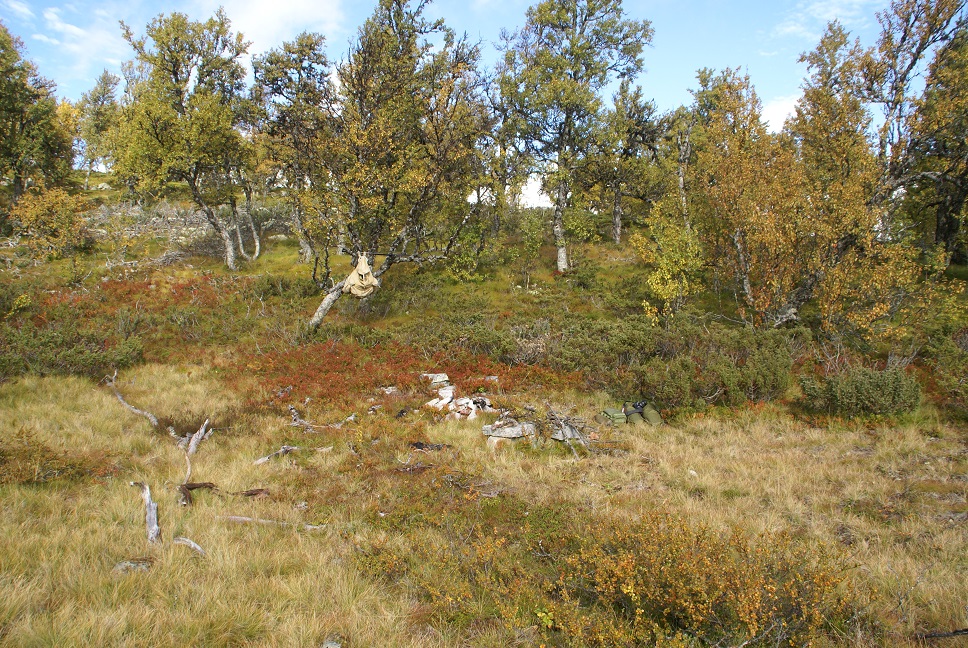 nice trip lads, if you organise any other trips next year i'd fly out to join you both, especially if Odd is doing the cooking

Done deal, Hamish!!
Book the second weekend of september! It has become a tradition by now and I'd really like to meet you in person.
J

I used to carry with me a small plastic tuppenware box packed with dry birch bark and birch wood pieces.

All very sound advice and well illustrated.
The suberin wax in birch bark cannot soak up water.
Conifer twigs, even Juniper, have lots of flammable resin.

RonW: How much of this were you able to practice at home, in your garden?
Fantastic trip and you show the confidence of having done these things many times before.
I keep trying to tell people that the trip is the wrong time to learn.
What should I be saying?

Learned the basics from reading; forums mainly like this one and BCUSA. Then replicated the steps, adapting them where needed.
Then went out to try it and I am lucky enough that my garden actually replicates a forest. So I was "out" while being no more than 5 meters from the house. Practiced the steps like splicing the wood, feeling, trying and feathering in both dry & comfortable, but also wet & less pleasant.
I was able to succeed pretty quick, simply because I used what I learned and focused on what I was doing. Having a backup takes away the negative pressure both at home and out there until confidence is established.

A trip/dayhike isn't necessarily the wrong time to learn, if you make it a "goal". I think it actually helps in creating conditions where you must focus, must pay attention to the surroundings and adapt. It will ram home the lessons of failure, but it will also massively boost your confidence once successful.

Great post Ron.
Definately shows the preparation and care need to be successful with fire lighting in wet conditions, very similar to the Scottish Highlands!

Nice pics and report. Reminds me of a hike in soaked surroundings a few years back. A coffee had to be made, but everything nearby was quite wet. Dead heather helped us out, the thin dry branches hadn't picked up much water and got the fire from first to more lasting flame.

I have to confess that when camping in Wales, in the usual inclement weather of high wind and pouring rain, I resort to a zippo lighter and firelighters, even then it is not so much that everything that is wet so much as the wind that blows everything out before it can get started. It's also in situations like that when the kelly kettle comes in handy for being a self contained fire.

Agreed. Always have several different and reliable methods of starting a fire.
You appeared almost "business-like" in your fire starting.
I carry an aluminum screw-top cannister like a tall soup can. 3 different firestarters,
two folder knives, wire rope saw, reflective sheet as a small tarp, etc.

Here, the big deal in the various mountain valleys is to get out of the wind first.
Some sort of cord, some sort of cheap tarp, just for a wind break.

I see that it's still dry under them so the resinous dead twigs against the main trunk will be the driest.
The Raven pairs are snuggled in against the trunks. Think I will leave it to them today.

Business-like?
How do you mean?

When out I never go without a basic setup, which contains a cheap poncho, an emergency blanket, folding knife, rope, whistle, emergency firekit (containing tampons, waxine light, lighter and a hexamine block) amongst other things. Learned the hard way that you can get lost in familiar terrain under unfamiliar/unforeseen circumstances. And damaging an ankle or knee is all but too easy in uneven terrain.

Business like. = confident, no hesitation. Unforeseen circumstances. Certainly.
You remind me that I need to add more tinder-like material to my fire kit.
J

Do you soak it in something beforehand?

IWhen young, I used to have a Vitamin container ( Aluminium tube with dehydrating crystals in the plastic snap-on top) filled with the white fluff from the plant that grows in Sweden on wetlands ( Angs ull) mixed with powdered dry pine resin and finely crushed fat wood
(Sorry, no scandi letters on my laptop)

When I got older I just had a pack of hexamine tablets.

When it comes to emergencies it matters not what tech we use, as long as it works.

Nope, just unravel it and it will burn with one strike for a firesteel. Also good to have as an additional piece of band aid.

RonW = Thank you very much. You point out a tinder source, unusual though it may be and how well it works.
Easy to add in small spaces in my fire can.

Not just a tinder source. But be careful. It burns quite fiercely and the flames are not always equally visible.

I just stuffed one into my nose, when I had a pretty bad nosebleed after someone released a branch into my face. Looks stupid, but it does what it is designed to do.
You can unroll it, using it as wadding over a bleeding wound, held in place with some tape too. Ot when soaked as a cooling pad over a minor burn. Makes things just a bit less uncomfortable that way.
You must log in or register to reply here.

S
TBS vs light my fire