In the wood today - three hares 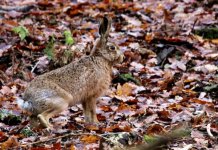 I used to see hare's on the town outskirts but they seem to have disappeared to only an occasional one. I understand the nearby Munro is full of them. I walked up to the old man of Hoy a few years ago and there was loads all still in their winter coat.

Yep got a few round here I always forget how big and fast they are until I see the next one. Population seems to be holding well over the last 15 years that I've kept an eye out for them. Seen a few roadkill sadly recently

SCOMAN said:
I used to see hare's on the town outskirts but they seem to have disappeared to only an occasional one. I understand the nearby Munro is full of them. I walked up to the old man of Hoy a few years ago and there was loads all still in their winter coat.
Click to expand...

I take it you're talking about mountain hares? (Lepus timidus - our native species). Sadly no longer in this part of the country - restricted to Scotland and, I believe some, in the Pennines. Ours are are Brown Hare (Lepus europus).

The hares I seen around town I always considered just hares but the ones up the hill were definitely mountain hares. The last few times I seen them was last year in spring but I had the dogs with me and they were off like a bullet. My two dogs didn't even see them.

It seems a lot are suffering from disease, apparently Myxomatosis, which is normally spread by blood sucking insects, and it seeems its affecting the Hare population as well as the rabbit population, research suggests there is only about 1% mountain Hare population there was in the 1950's, the future doesn't look good for them or the Brown Hare at the moment.
As the disease makes them blind and lethargic they are more prone to attack from raptors and corvids.
Last edited: Jan 13, 2021

I had read similar reports but recently have found contradictory statements. Because hares don't live in warrens, underground, and in large colonies the spread of Myxomatosis is far slower and less likely. So, although hares have been found with the disease it is not considered likely (by some) that it will cause the devastating drop in numbers predicted. However, brown hare numbers have dropped 90% since the 50's.

Mountain hares are still culled extensively on Scottish moorland to 'protect' grouse shoots - I think that is far more likely to cause problems than Myxomatosis up there. Population sizes vary naturally ten-fold reaching a peak every ten years or so making actual comparisons very difficult.

What sort of effect do Hare have on the grouse?

It is claimed they spread a flea or tick that carries disease that affects grouse. I have no idea if it is true or indeed, if it's not, why they should need to be culled.
D

The more time I spend working on or around grouse moors the more I see them as being a problem rather than a solution.
Raptor persecution, heather burning causing less porosity of the moorland making flooding downstream more likely, less biodiversity, wipes out trees from getting started yada yada.
But, at least the Golden Plover population is doing well eh?*


Then they sometimes recieve government subsidies and are often owned by people who dodge UK tax by having their business based in the Caymen or Channel Islands makes it even more irritating to me.


As for Hares, I sometimes see them when I've been driving to a job on Vindolanda Roman museum and last year me and a mate went camping near where I used to live and as I was sloping off for a pee at daft O clock in the morning and two were boxing.
Think it was about June but I guess they practice?


*anytime grouse shooting is under pressure they counter with how well golden plovers are doing like that makes up for the raptor persecution.
Reactions: FerlasDave

I live a couple of miles away from moel ysgyfarnogod which literally means “hill of the hares”. Locals can remember it being covered in mountain hares only a couple of decades ago, for some reason it was a popular breeding ground. But now we’re lucky if we see a single European hare I’ve not seen any for at least two years now, it’s a real shame. Plenty of grouse up there though!

The plus side is we get plenty of skylarks breeding up there though, which is an awesome way to spend an evening if you ask me.

Today, digging over the last patch of my new raised vegetable bed, I looked up, and there, not more than 30m away from me, was this beautiful animal. It wasn't at all perturbed by my presence or when I went and got the missus and camera.

It was eating Hogweed! 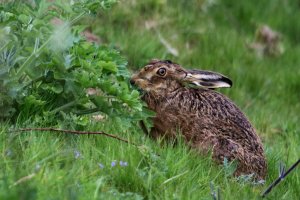 Reactions: Snufkin, Lean'n'mean, punkrockcaveman and 1 other person
You must log in or register to reply here.

Flora & Fauna Wednesday at 12:00 AM
JonathanD

Close encounter of the cute kind