Dave said:
I think the government told the people in the old ROC bunkers they would be safe, knowing that they were not safe from radiation.
Click to expand...

Reminds me of this chap:

Personally, I have loved the idea of a bunker style workshop ever since I saw that crazy chap bury that shipping container.
P

Not sure how much fun bunkers might be in reality............http://www.coleshillhouse.com/bunkers.php

Should be fairly quick. Depends on how hard it is. Where will you dispose of the stuff?
Click to expand...

I am lucky to have a sloping field that could easily 'absorb' the spoil; the real problem would be barrowing it past the other half
J

If you continue eith your idea/ project , beware of cave ins.

It may be safer to dig from the top down, do the ceiling structure then backfill..
P

I do not want to think that even in a 'situation' we would start behaving like savages.
I want to believe we would start cooperating for best possible chance of survival.
If that does not happen I am happy to join the crowd in Purgatory.

Our house here is built like a shelter. Reinforced steel shell. Hardened double glass with reinforcing plastic between. Steel doors ( encased in a wooden cladding).
Click to expand...

You would be suprised, a council house I went in to this day has a stocked nuke bunker with toys for kids nappies, air filters and government communications to this day, so the select fiew can survive the blast and organise the ash into orderly piles . I imagine it's the same all over the country in civil centres.

Apparently in the case of such an event, there is a list of people, most of whom dont even know they are on it, who would get a knock on the front door, and pulled to a safe location. Personally I'd tell them where to go if you couldnt take your family.

The gov are laying out this new rail scheme, to increase revenue, maybe they should build proper bunkers all over the country?

It surprised me to read that Russia, regularly have simulated emergencies, where they evacuate tens of millions into underground bunkers.

I think it would be better to be right in the epicentre and be instantly vaporised personally. Bit dark, sorry.

Just over the hill from me is menwith hill, im sure thats high on the strike list...

I remember watching 'threads' when i was a kid. Terrible stuff. Mmmmm, yeh definitely a bit dark on the subject matter. Apologies.

I was one of the posters to the other thread.

I've always had an interest in underground places. First time I saw the 'Tellytubbies', I saw it as an construction tutorial. (Actually started doing some small scale experiments with concrete moulding).
When I brought my house, in the first week, I was digging test holes, with the idea of digging a bunker. But the water table is so hight there, that the holed filled with water within minutes. So that ended that project. (I would probably have undermined the whole garden by now otherwise!)

Actually, I've had need to research ground water control, recently. The comnclusion is, you can't stop water. it moves slowly, but with enough pressure that you will have serious work to stop it. Pretty much nothing short of a full fibreglass tank will work. The trick is, have a low pressure gap to drain it, and pipe/pump it away.
In my case, I was digging into the sloping land, to build a workshop,and I used this technique with great success.

Burying shipping containers is not a good long term solution. They are going to rot, leak and I doubt that they have the strength to resist the side loading of ground, if there is any form of instability there.
The retaining walls I have seen, holdling back deep excavations (I'm only a DIY builder, so take this as just my limited experience), have been hollow, 9" block, with rebar and high density concrete fill.

I have seen long tunnels (rifle ranges, built from concrete sewerage pipe sections) built into sloping land, by digging into the bank, placing the pipe in the root, then back filling. But they have to put a gravel bed in, to provide drainage, as ground water will be coming down the hill. (Hills tend to be there because there us rock under them, so don't be supprised if you come across something hard when digging!).


An interesting method that seems to be gaining popularity in the US, for building basements and strong structures, insulated concrete forms.
These are huge polystyrene lego blocks, which you build up the walls, then rebar and fill with pumped concrete. Leaving you will a concrete box, lined with insulation, inside and out. Looks fun.


Again, from the other thread..... If you want some ingenious covert bunker building ideas, googkle for WW1 trench building techniques..
J

The polystyrene blocks are a popular building method for houses. Well insulated, strong.
Calked ICF. Insulated Concrete Form.
Canadian patent, but developed in Europe in the 1950&#8217;
I almost did my house in it.

My root cellar was build around 1945 or 50, with bricks walls in a vault shape. Sand floor. Built into a slope, soil covering the bit that was not in the slope.

Wet when it was wet outside, but it drained well though the sand floor.

On my wanderings in the forests all over Sweden I have come across lots and lots of derelict root cellars. The houses close by were usually completely gone, just foundation left, or falling apart.

Those old root cellars had walls of stacked stones.

petrochemicals said:
I imagine it's the same all over the country in civil centres.
Click to expand...

Apparently that's a load of nonsense. They definitely didn't find a nuclear bunker at my local council offices when they knocked it down. It was just a 'sinkhole' apparently

gonzo_the_great said:
. First time I saw the 'Tellytubbies', I saw it as an construction tutorial..
Click to expand...

I had a visit to one, under our old county council building. I mean old, as in, where I used to live, rather than ex-building.

the centre was a concrete bunker, built into the foundations, with all the telecoms and supplies and booths for controlers for each of the emergency services, for the CEPO (civil emergency planning officer) and staff, to manage a situation until central government was able to take control again.
Whole racks of documents, with plans, drawingas and list of resources and people.
it was certainly built for a nuclear event, as there were thick copper earthing strips running around it, to bond to, in case of EMP.

I did ask what would happen if there was a nuclear blast and would they be beried. Apparently the building was designed so that the floors/walls would be blown through, leaving the steel structure standing. So digging them out would be simplified.

The parish I lived in had decided that they were going to be anti-nuclear. Which I assume meant that the bombs would just glide over us and get someone else. So our local centre had no such bunker.

We visited friends in Switzerland last year and all the houses there had to have bunkers, they were just built into the house. Extra thick walls, air purifying system, huge steel doors and windows etc. The rule is that the room has to be abelto be cleared and occupied within 30 minutes and tehy can stop by at any time to check...

I knew a guy years ago who had a garden that had been railway land. On it, he had a two storey signal box and a WW2 air raid shelter in good condition. I was so jealous...

daveO said:
I'd be too paranoid that someone would lock the door from the outside. I'd prefer something in the earthship mould, built into a hillside at the back but with nice big windows facing the sun at the front for a good hydroponic setup.
Click to expand...

That thought of being locked in occurred to me too. I do like the type housing you're describing though

Not only are they hurricane/tornado resistant, but they're also much more temperature stable (meaning lower heating and cooling costs. The problem is they're not suited for all types of topography. 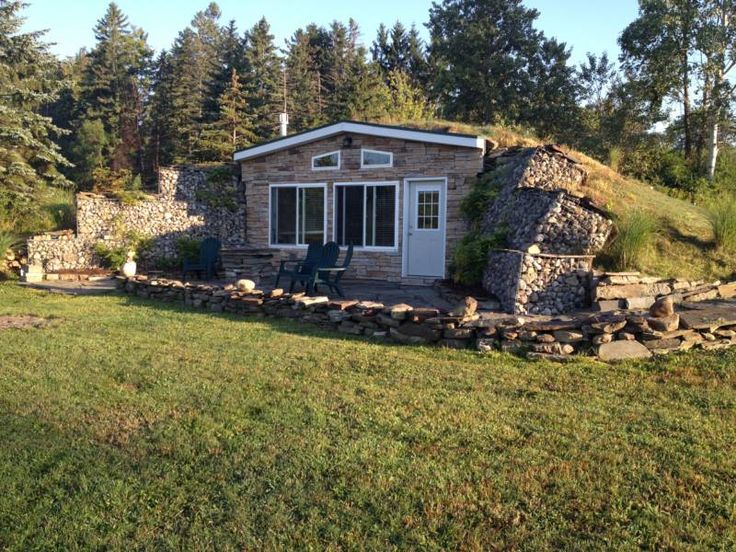 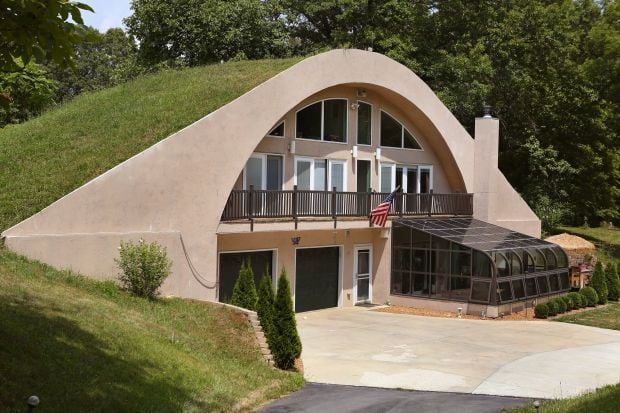 I was working on the isle of harris and saw this, or one similar to it. During the Cold War, Sweden, being on the frontline, had a system where if you build a house with a 'bunker cellar" or build a new garage like a bunker to a certain standard, the state paid for a large % of the cost. Had to be a certain size. Had to have a small room that was full of equipment like canned food and water, body bags, lime powder, meds.

I guess now all those rooms are cleared out and converted to Man Caves!


Tony said:
We visited friends in Switzerland last year and all the houses there had to have bunkers, they were just built into the house. Extra thick walls, air purifying system, huge steel doors and windows etc. The rule is that the room has to be abelto be cleared and occupied within 30 minutes and tehy can stop by at any time to check...
Click to expand...

daveO said:
Apparently that's a load of nonsense. They definitely didn't find a nuclear bunker at my local council offices when they knocked it down. It was just a 'sinkhole' apparently

Blimey, talk about services being unevenly ditributed, we get a bunker, Wales gets a hole.

All those pictures show houses that are mostly built above ground level and just have the earth banked over. And not too thickly eather.
That is a way of fixing the ground water issues.