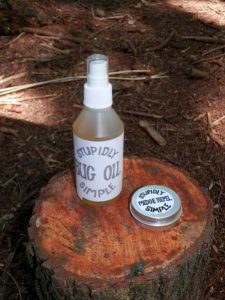 For many people, in many locations, the summer months can be spoilt by the over eager attentions of biting and stinging insects.

Most insect repellents available commercially contain the most intimidating lists of chemicals – some of which have noticeable side effects such as melting plastics – which make a number of people wary of using them.

The hunt for a 100% natural and truly effective insect repellent that contains ingredients on the EU “approved” insect repellent materials list and is safe, legal and easy to use, is a difficult one, but recently Fiona and Mick (Xylaria and Woodstock of this site) have simplified the hunt by producing and marketing “Stupidly Simple” Midge Repel and Bug Oil.

Both the Midge Repel and Bug Oil are made of 100% natural ingredients and are easy to use.
All the ingredients are deemed safe by the authorities for use as cosmetics.

Lemon eucalyptus oil has long been used as an insect repellent and is also antiseptic, bactericidal, deodorant, fungicidal and a vermifuge, while being non-toxic, non-irritant, though is best avoided during pregnancy (not something that 50% of humanity have to worry about) and can (rarely) cause contact dermatitis – not that there is a great amount in the products.

The pine tar used is of a creosote-free veterinary grade and has long (since the Bronze Age at least) been used as a midge repellent, but has yet to make it onto the EU list of repellents!

The sunflower oil and beeswax are included mainly as carriers so that the active ingredients can be applied in an easy and controlled way.

The Stupidly Simple Midge Repel come in tins and is a stiff paste that is not only simple to use (just rub the surface with your fingers and apply very sparingly to your forehead and other exposd areas and rub in until the product is no longer visible) but is also very pleasantly scented with a lemony smoky aroma that should appeal to most bushcrafters! There is little or no unpleasant waxy/oily feel to the applied skin with the Midge Repel being absorbed well into the skin.

The Midge Repel has been widely field tested by members of BCUK with favourable reports and I have been comparison testing it in West and South Wales.

My tests have been (fittingly) simple – applying the Midge Repel to some parts of my body, but not others, i.e. giving myself a good application to all but my right arm, then enjoying myself out in midge-infested parts of my local woods.

The last 2 oils have already been described. Lavender oil is known as “the queen of oils” being recognised as good for a huge number of problems, its properties including being analgesic, anti-microbal, anti toxic, insecticide, parasiticide, vermifuge and vulnerary. It also smells very nice and is non-toxic, non-irritant and non-sensitising. 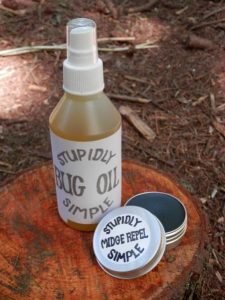 The rose geranium oil is recognised as an anti-inflammatory, antiseptic, deodorant, fungicidal, styptic, vermifuge and vulnerary. It is non-toxic, non-irritant, non-sensitising, but can cause possible contact dermatitis in hypersensitive individuals, but this is extraordinarily rare.

Rose geranium is used for treating cuts, dermatitis eczema, acne, bruises and other skin problems, ringworm, against lice and as a mosquito repellent. It also has a reputation as a tick repellent.

Neem oil is an antiseptic, parasiticide and insecticide and is an approved biopesticide – and is widely used as a cooking oil!

Widely used as an insect repellent and insecticide, Neem oil has some contraceptive properties, so should not be used by those hoping to conceive or pregnant women, children under two years old and, due to other properties, Neem is not thought suitable for those on immunosuppressant therapies.

Neem oil is a proven pesticide for house flies, sandflies and mosquitoes, and basically anything that wants to bite you and has a hypodermic as a face! Neem oil makes your skin unpalatable to biting insects and has a strong odour, but the Stupidly Simple Bug Oil smells pleasantly lemony.

The Bug Oil is simply sprayed on from the dispenser bottle and rubbed in. Although leaving a slightly oily feel, it is not unpleasant to the touch as it is absorbed well into the skin. After application it is advised that you wash your hands as you don’t want to get the taste in your mouth!

Again I tested the produce by applying it to parts of my body and not others. The protected bits were bite-free, the untreated bits bitten, but not as much as expected. The Bug Oil certainly seemed to dissuade wasps from coming too close – for which I am particularly grateful!

Overall, I found both the Stupidly Simple Midge Repel and Bug Oil effective, pleasant to use as they contain 100% natural, as opposed to chemical, ingredients, and ethically pleasing as well. I will certainly be using both products as my primary choice of insect repellents in the future.

I find the tin of Midge Repel easy to carry on walks to apply as needed, while the liquid Bug Oil seems more suited to my “base camp” needs.

I have found that both products need fairly frequent (around one to 4 hours depending on how sweaty you get) re-application, especially if I am sweating, for full protection and that the products are easily washed off with soap and water, or removed with baby wipes.