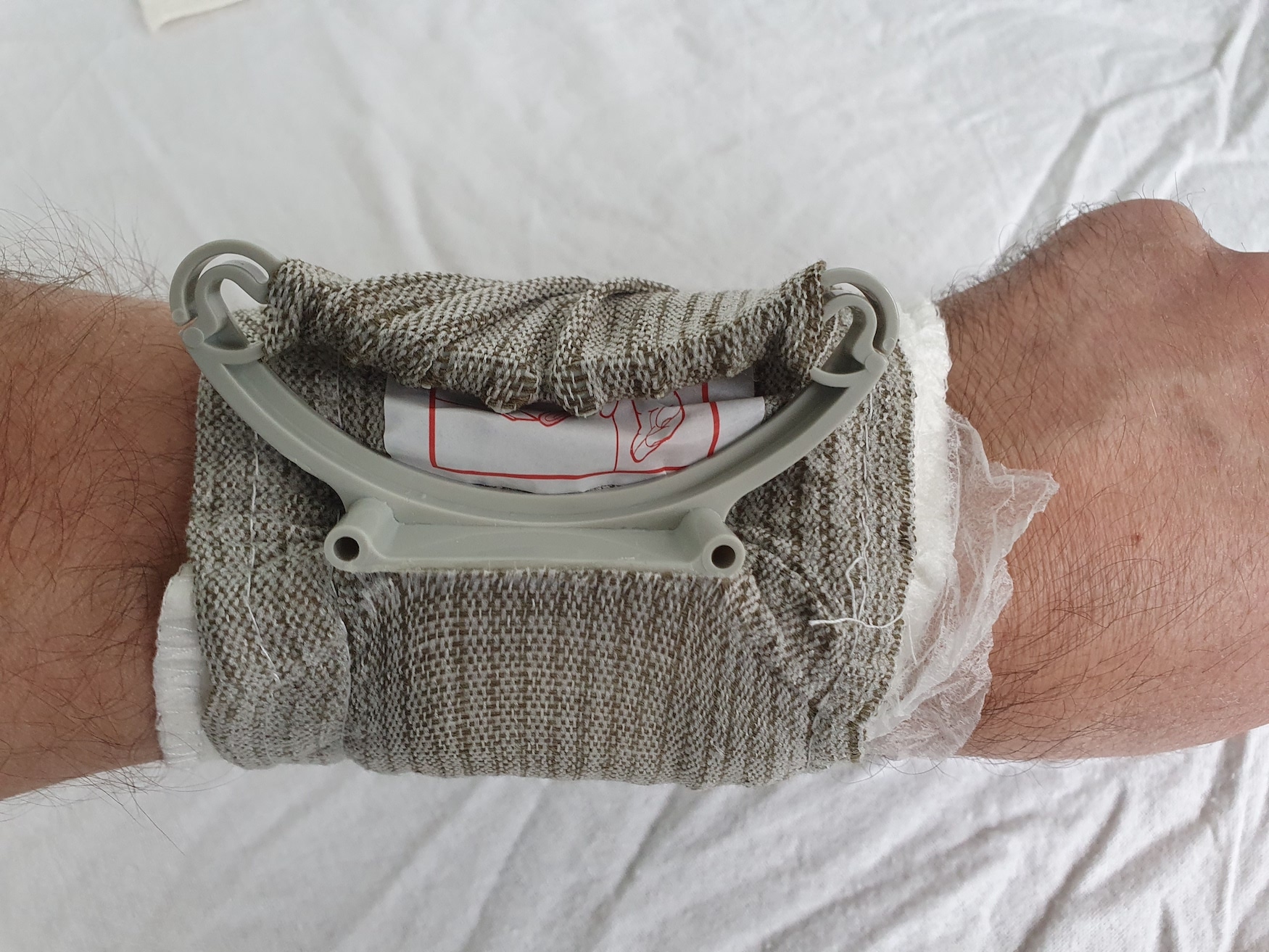 Using various edged tools is common for any bushcrafter, so carrying a first aid kit is essential.

Apart from the usual assortment of plasters and antiseptic wipes for the smaller personal accidents, it is also wise to carry a couple of bandages of some kind. But which one?

There are many bandage options to choose from, one that many people opt for is the old faithful Emergency Bandage, also known as the Israeli bandage, manufactured by PerSys Medical.

Available in both 100 and 150mm (4 and 6 inches) widths it’s undoubtedly a good dressing and worthy of a place in your first aid kit, but what other options are there?

The Tactical Trauma Treatment (T3) bandage. The same manufacturer makes this as the Israeli bandage. While it is almost identical in pack size to the 100mm, the T3 offers more flexibility with the design and has increased usage.

The family resemblance to the Israeli bandage is evident from the outset with the heavy plastic vacuum-packed grey outer wrapping. It has the familiar three deep tear points on each side and top centre at one end. These tear points are still deep enough to be felt in low light and torn easily if wearing gloves.

On the front of the pack is a label detailing the contents, along with the manufacture and expiry dates. I was particularly pleased to see that my example had a long shelf life of 8 years.

On the back is a set of instructions for regular use. Unlike the Israeli bandage, there are additional dressing options offered with the T3. One negative is that the instructions are written relatively small and appear on a dark background, making it quite difficult to read. Having the instructions are useful if you need to hand the pack to someone else, but generally, an emergency is not the time to learn first aid!

Once inside the outer grey wrap you find another clear vacuum pack, with the same V notches cut in as the outer and highlighted in red to allow for easy opening.

The dressing itself unfolds conveniently with the pad on one side and the pressure bar on the other.

The pad measures approximately 90 x 180mm and is about the same thickness as the Israeli bandage.

A useful feature is the option to unfold the pad making the pad 180 x 180mm, enabling the bandage to cover a much larger wound area than the Israeli bandage, or you could use the additional pad as a separate wound dressing as there is a perforated edge to the fold-out so it can be easily separated.

Like the Israeli bandage, there is a loop at the short end, which you can slide onto your arm to help start the wrapping process if you have to self-apply the bandage.

It’s not easy starting the bandage wrapping process if you only have the use of one arm!

Where the T3 is different, is that there is an additional packing gauze held in the loop. The stretchy gauze, 1.2m long, can be used to either add an extra absorbency layer to the main pad, to pack into a wound or, used with the detachable pad to treat a second injury as an extra bandage.

The material mirrors the elastic material of the Israeli bandage, again showing the family link, however, the overall length of the T3 bandage is c10cm longer than the Israeli, coming in at just under 1.7 meters.

Like the Israeli bandage, a string insert stops the bandage from unravelling when you open it – a brilliant idea as it enables quick application, without the risk of dropping the rolled bandage in the mud!

In a first aid scenario, the T3 bandage has the same features as the Israeli dressing with a pad attached to an elastic compression bandage, a pressure bar built-in and a retaining clip.

What stands the T3 apart from other bandage options, is the expanding/additional pad and the extra packing gauze.

The secondary pad can be used to cover a larger wound area with one bandage. The extra gauze can be used as a wound dressing should the main bandage be used as a tourniquet or used as a completely new dressing.

The vacuum packaging also makes for a smaller, lightweight item (compared to the 6-inch version generally carried) as part of your first aid kit. The fact the bandage only comes in a 4 inch /100mm size still works because of the ability to fold out the wound pad.

I have already replaced my standard 4-inch Israeli dressing with the T3 in my first aid kit as I am suitably impressed with its additional features and capabilities.

Reflex Medical kindly supplied the T3 bandage in this review, and they have offered a 10% storewide discount to BCUK members using code BUSHCRAFTUK21 until June 2021.
Click here for REFLEX MEDICAL