My apologies if this has been covered before but I cant recall seing it brought up, which may be a function of my age rather than reality..

since I use quite a few pots of differing widths and bases shapes (OK round and canteen cup kidney shaped) Ive ended up with several different types of base to hold a trangia type burner or had to add extra parts to get them to fit. Has any one tried to use a folding wind shield like these, 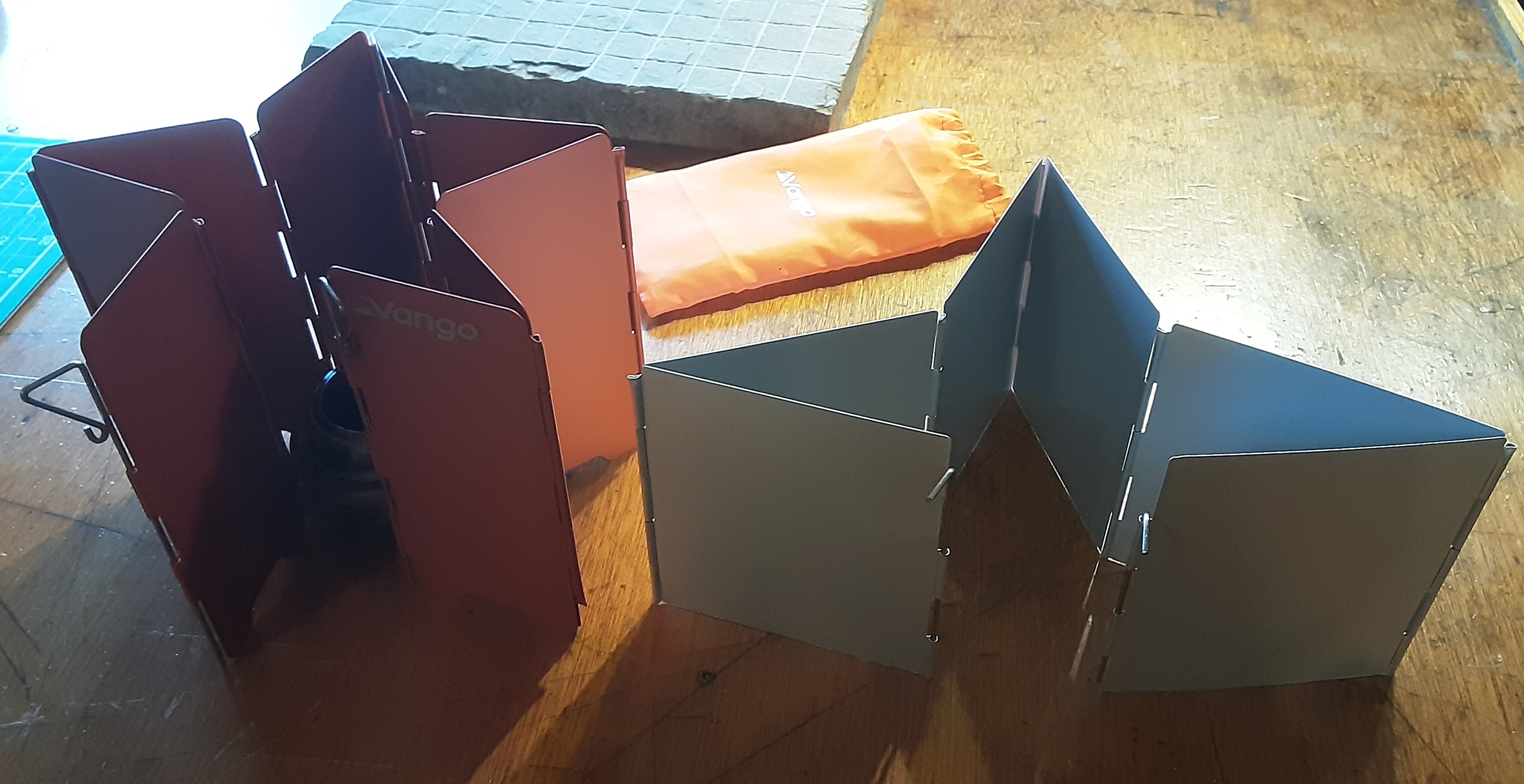 As a stand for the pot itself. Naturally it would have to be cut down, in the case of the burner I use most to be a inch taller than that its is to be most efficient and I would probably replace some of the hinge pins with longer ones that could be poked into the turf to increase stability.

I thought I'd post the idea here first to be shot down in flames if there's something that is obviously wrong with the idea I've missed. My main misgiving is how well the thin aluminium would take the heat, what thickness and metal would work best? Last week I tried to make a cross stand to go on top of the burner and all I had to use was some 1mm Aluminum sheet such as you use in modelling. It actually worked fine until I removed the canteen cup of water but within a minute and a half of me removing the heat sink it had melted and collapsed under its own tiny weight, thankfully not harming the stove/burner. In the end I bought a stainless steel cross stand off ebay for £4.50, not being to able to bring myself to cough over 20 for the brand name Ti one I really wanted.

The sort of windshield on the left, having most and narrower leaves would be the most adjustable to size and shape of pot.

I appreciate it that this is a bit of solution to a problem that's not really a problem, normally I improvise a wind shield or just find a sheltered spot but since I've been looking at the public access land near to me and its nearly all moorland wind may well be a issue if i want to use meths burners.. Anyroad to get to my point I will probably be carrying a windshield on my next trips out ( if the weather ever improves ) I got to thinking about them..

Here's a windshield/pot stand combo I made myself a few years ago.
It's just two sheets with slots on one edge so they slide together. Then another couple of slots along the top edge so a bar can be put in place to hold the two sides at an angle and so the pot doesn't fall between them.
It couldn't be much simpler to make.
I'm sure you can get the idea just by looking at it. Wander said:
Here's a windshield/pot stand combo I made myself a few years ago.
It's just two sheets with slots on one edge so they slide together. Then another couple of slots along the top edge so a bar can be put in place to hold the two sides at an angle and so the pot doesn't fall between them.
It couldn't be much simpler to make.
I'm sure you can get the idea just by looking at it.

Not to take away from OP, but this is very neat. Is it welded in place? Would be interesting to see it as a 3 part tool that slots together and comes apart!

No, not welded.
The parts just slot together and pack flat.
Unfortunately I gave it away to a friend some time ago so I can't take pictures.

That is a neat design, would be very easy to copy, if you don't mind. Is the jam jar lid for pre heating?

I've been thinking of making a sort of ultralight pre heating ring for the evernew stove from a length of ally tubing, bent into open ended ring slightly smaller than the outside diameter of the stove so it would grip on. I'ack the tube with a wick, probably a strip of carbon felt orwhatever its called then, then skim what will be the top side of the ring on the belt sander until the wicks exposed. I'll crimp the ends if needed. Just need the model shop to reopen to get some tube, may need to dig out a spring to put inside while its being bent to stop it collapsing. I have also consided just getting a 1/8 th inch diameter spring, packing it with a wick and making it into a loop so when on the stove the springs opened up to expose the wick. The thing could be dunked into fuel, put on the tank and lit torre heat the fuel. Just ideas really.

Take a look at these

Windscreen with built in pot support
As per no affiliations etc

Thats a great site never seen it before. Herself will make a order for me once she's looked through it for herself. The windscreens ain't quite what I'm after but some of the accessories are great! I've been husbanding my last 28mm squirt top for years. I dare say someone else has been selling them but I've not seen them for years.
ATB

I use a speedster windshield/pot holder,made my own burner using a small metal container filled with carbon felt,really light and compact.For fuel i use I.D.A. (denatured alcohol).

The disadvantage with standing a pot on top of windshield is that the wind shield no longer functions properly as a wind shield. Greatest heat transfer happens when the heat hits the bottom of the pot, then flows up the sides and isn't blown away. This is the principle of the Caldera Cone. Its what I get with my Koro and Coke can stoves and baking tray foil shield.

If I was going to try to make a stand from one of those (heavy!) fold up wind shields, I would look at drilling some 6mm holes part way up the panels and using bars run hole to hole to support my pot. That way I would still have the lower portion of the pot protected from the wind.
Reactions: Erbswurst and Herman30

Cheers for the input folks! Having fiddled about a bit I've come to the conclusion the games not worth the candle. The weight saving would be minimal, basically the weight of the cross stand and as has been pointed out the efficiency would go straight down the tubes.

The wind shield on the right in the pic I posted is the cut off section from a bought one I altered to best fit a certain stove and pan pairing I use, it weighs 67 grams which I can live with. To be honest the little waxed canvas sleave I knocked up to keep it tidy and stop the sharp edges damaging owt else weighs more than the shield!

No doubt, being a victim, i'll get a Evernew Mk 2 cross stand when I can find one over here for what they are in Japan. It would sezm that inside this pirker is a gram weenie trying to get out.

The exercises not been a complete waste, i've some very useful stuff coming from Speedster and I've learned some from your thoughts.

PS I;m much impressed with the service by Speedster, order went in Saturday and it was here by Tuesday Morning. 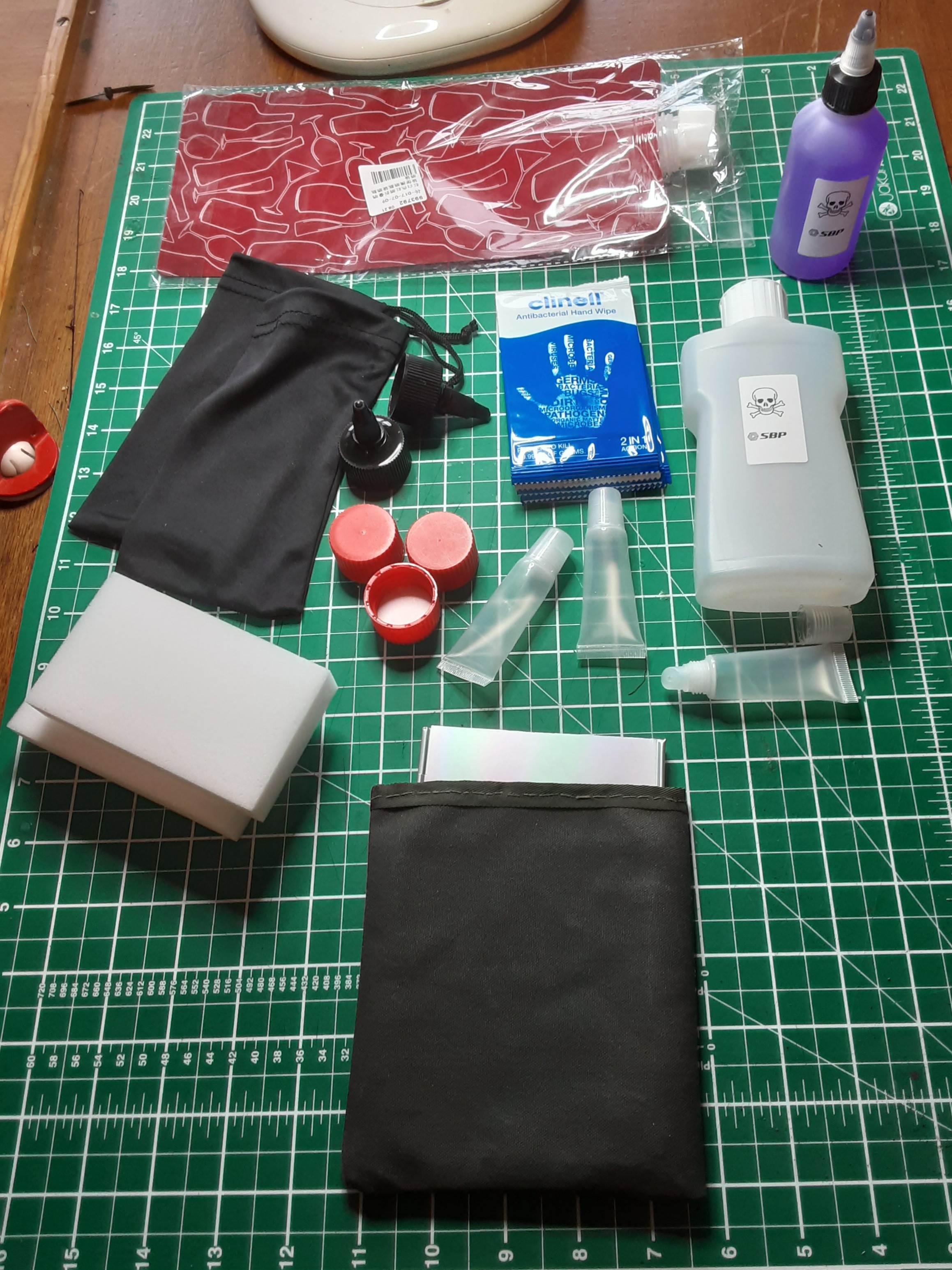 The thing at the bottom is the slip case and cut down wind shield.
Reactions: stevec

I tried this with a aluminium wind/heat shield, so I speak through experience.. I also cut it down.
It’ll just buckle & warp & become unsafe to put a pot on it.
It’s a bugger when you’ve just lost your water for a brew.

yeah Ive knocked it on the head, the steel cross stand and separate folding wind shield are working fine and weigh almost nowt.

Something im going to try is see how narrow a effective wind shield need to be to stop the Evernew burner blowing out as I now always carry a 70mm wide Ally' trowel. Mind, its still rare I cant find a sheltered spot anyway but every little can help at times....

Been thinking along similar lines to the original post. I was thinking I could use the taller wind shield in a circle configuration and use that to contain a fire then lay a regular grill on the top as a stand.

I have a little wood gas stove, I use it with my alcohol stove or wood. All goes in one little bag.
You must log in or register to reply here.