I do have Vol 4.
I would advise you to not buy it, based upon what you have posted here.

Volume 4 strikes me as a somewhat more specialised book than the other three. Being written much later it is sort of an update for some things, introduce a few new bits and a chance to capture or expand on things from the earlier books.

If I was back in my archery obsessed bow building phase, with my grown up tool set, I would probably make use of the Wood chapter, Heat Treating, the Design and Performance Revisit, and the Laminates stuff. I might look at the Mass Principle, but I am not sold about how much help it would give.


Vol. 4 Content:
Bow Wood - Talks about moisture content, choosing boards, what could be called tips and tricks, and then about 17 pages of bow related properties and notes about different woods in alphabetic order.
Heat-Treating Bows - reporting on the effect of heat treating the belly of reflexed or recurved wood bows to achieve higher performance.
Copper Age Bow - more anthropology/history, with a bow build. Less interesting from a practical point of view than the previous stone age bow build.
The Mass Principle - the author has worked out a formula to relate bow mass in oz with bow length, draw length and draw weight, with the aim of providing some sign posts, via weighing the bow during construction, on how much material to remove and how ideal the bow dimensions are.
Turtle Bow - a story about a competition to build the slowest bow possible.
Design and Performance Revisited - since Vol1 was published, a lot of people have built bows and tried new things, and some new ideas and refinements were discovered. This is really an update of the earlier work. Very useful if you want to build the highest performing self or all wood bow.
Flight Bows- fairly short chapter, possibly good if one is interested in making and shooting all wood flight bows.
Laminated Wood Bows - more than just wood backed, full 5-6 layer laminations built using a form to impart reflex/deflex etc. Useful if you are more of a carpenter wood worker rather than a woodsman and you want the wood to do what you want, rather than be guided by the tree.
Character Bows - the polar opposite of Laminated! Dealing with snake grain, holes, limbs, huge knots. Builds on earlier volumes.
Arrows of the World - very much a discussion rather than instruction.
Lessons from Target Archery - Jim Hamm talking about improving accuracy with instruction from his daughter in law, a champion target archer. Best bit, I think, is challenging the wide acceptance of poor accuracy and the excuse that one is shooting wood or primitive gear.
Ishi’s Archery Tackle - discussion with illustration of Ishi's equipment.
Bulls on a Stick. - short bow hunting story.

Appendix:
Awakenings - Interview with Baker, Comstock and Hamm about the birth of TBB, what has happened in the years since and what they see for the future.
Your First Wooden Bow - a very short, 3 page, basic set of unillustrated instructions for making a bow
Reactions: Minotaur

Thanks for that; you've convinced me
Reactions: Minotaur
M

C_Claycomb said:
Will look up the dyslexia book. Didn't know it counted as a disability, but with so many people with so many more serious problems, the difficulties I have related to dyslexia seem very much like "first world problems"!

I know it still surprises me. You could always be registered as disabled if the time knowledge issues were life altering.


C_Claycomb said:
Main reason for the reply is to say that I would not now recommend the Leatherwall unless one is very serious and patient. It appears they have never updated the software software and the interface and usability is awful by comparison with every other forum I visit. There is still great info, but hard to search for.
Click to expand... 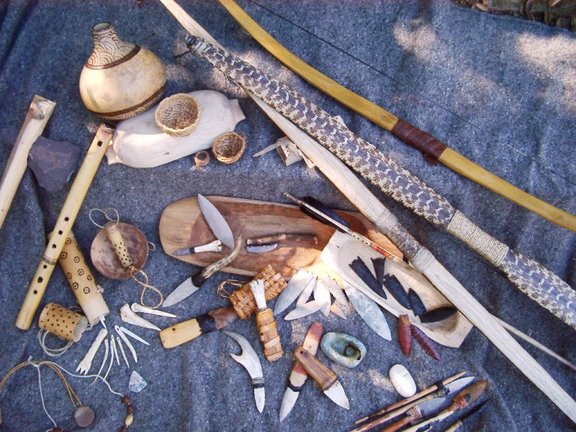 For discussion related to primitive bows.

www.tapatalk.com
as is the Primitive Archer forum that Bob recommended.
Click to expand...

More reading material.
Just signed up for kindle unlimited and got 2 months free so result.
M

C_Claycomb said:
Lessons from Target Archery - Jim Hamm talking about improving accuracy with instruction from his daughter in law, a champion target archer. Best bit, I think, is challenging the wide acceptance of poor accuracy and the excuse that one is shooting wood or primitive gear.
Click to expand...

For anyone interested the Nock On Achery - School Of Nock on YouTube looks really interesting. The first lesson is basically to just shoot arrows. It aimed at compound users however a bow is a bow in the end.

That is really interesting. Jumped to that straight off. A quiver made of a inside out otter skin so the fur protects the stone arrow heads.

Minotaur said:
For anyone interested the Nock On Achery - School Of Nock on YouTube looks really interesting. The first lesson is basically to just shoot arrows. It aimed at compound users however a bow is a bow in the end.
...
Click to expand...

Haven't seen that one.

I rather liked this one, its aimed at hunting more than target, but its also for recurve and long bow users. Its long! but good if you can watch in stages.

C_Claycomb said:
Haven't seen that one.
Click to expand...

It is done by the celebrity bow trainer. He is the person who teaches Joe Rogan etc.

What about horn bows?
Reactions: Minotaur

Tengu said:
What about horn bows?
Click to expand...

You are probably thinking of stuff covered in Vol2 chapter 5 - Composite Bows. Its all about horn/wood/sinew composites.
Reactions: Minotaur
You must log in or register to reply here.

V
Your medical kit - its a mess!