Like most here I love the woods, it's a complete escape from the stresses that creep into our lives. In the woods worries melt away, problems disappear and things become simpler allowing you to breath.

Something I have been thinking about recently and what I have been aiming to practice is, do less but do it better. In the past I have overlooked the basics in the pursuit of trying a little bit of everything, essentially meaning I only learn a skill at surface level.

I returned to the fallen oak this weekend and I had limited plans of what I wanted to accomplish, the only thing I had in mind was lunch. Nothing complex, I had two eggs and a rainbow trout freshly caught for the river Sainsbury's.

Below is a visual representation of my time in the wood.

With the rains we had in the woods was still rather damn on Sunday morning, even the dead wood caught up in branches still had some dampness to them, but with fire prep the billy can for coffee was soon on. 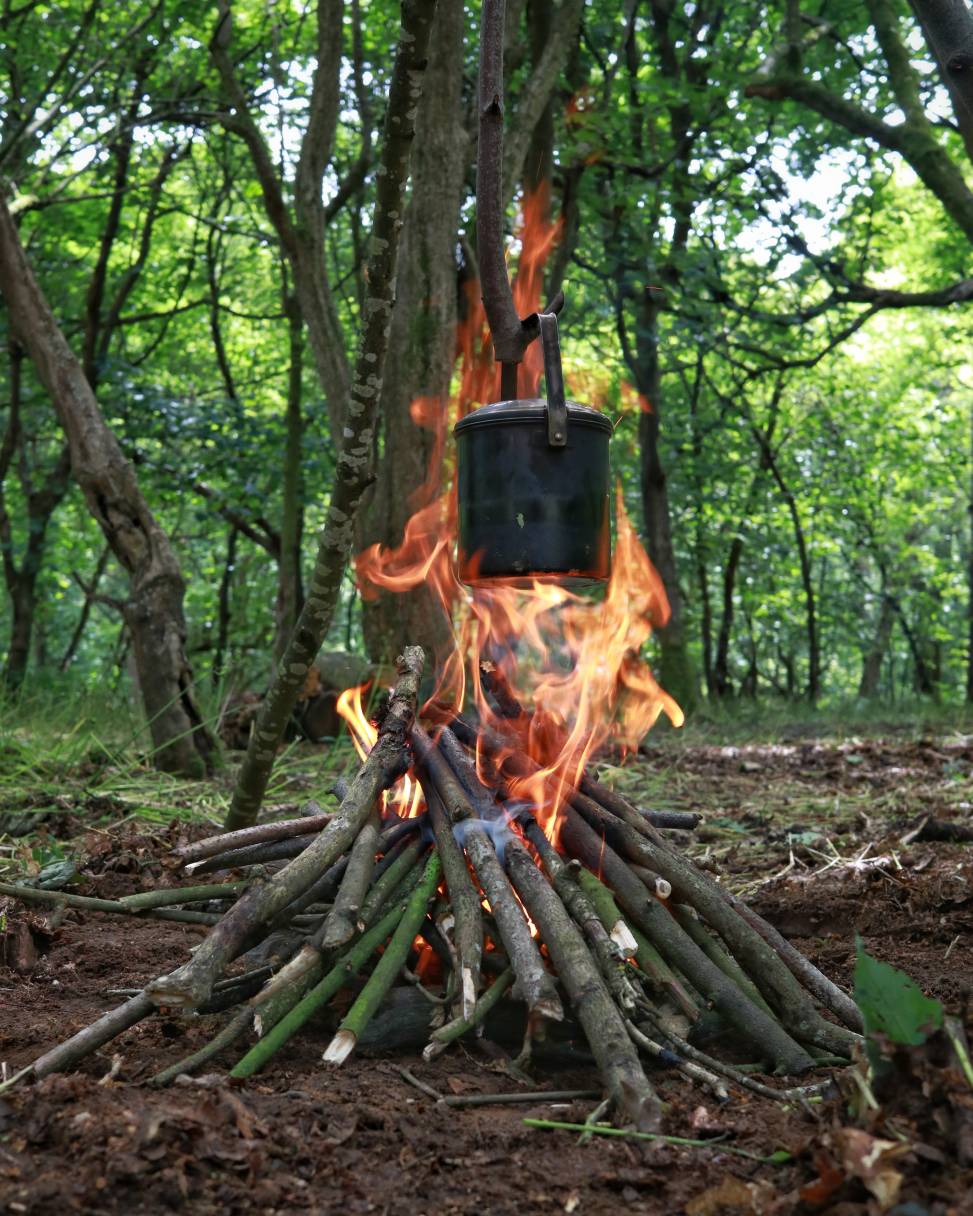 The eggs were cooked in the top pan in the billy, keeping the water eggy free for a fresh coffee. 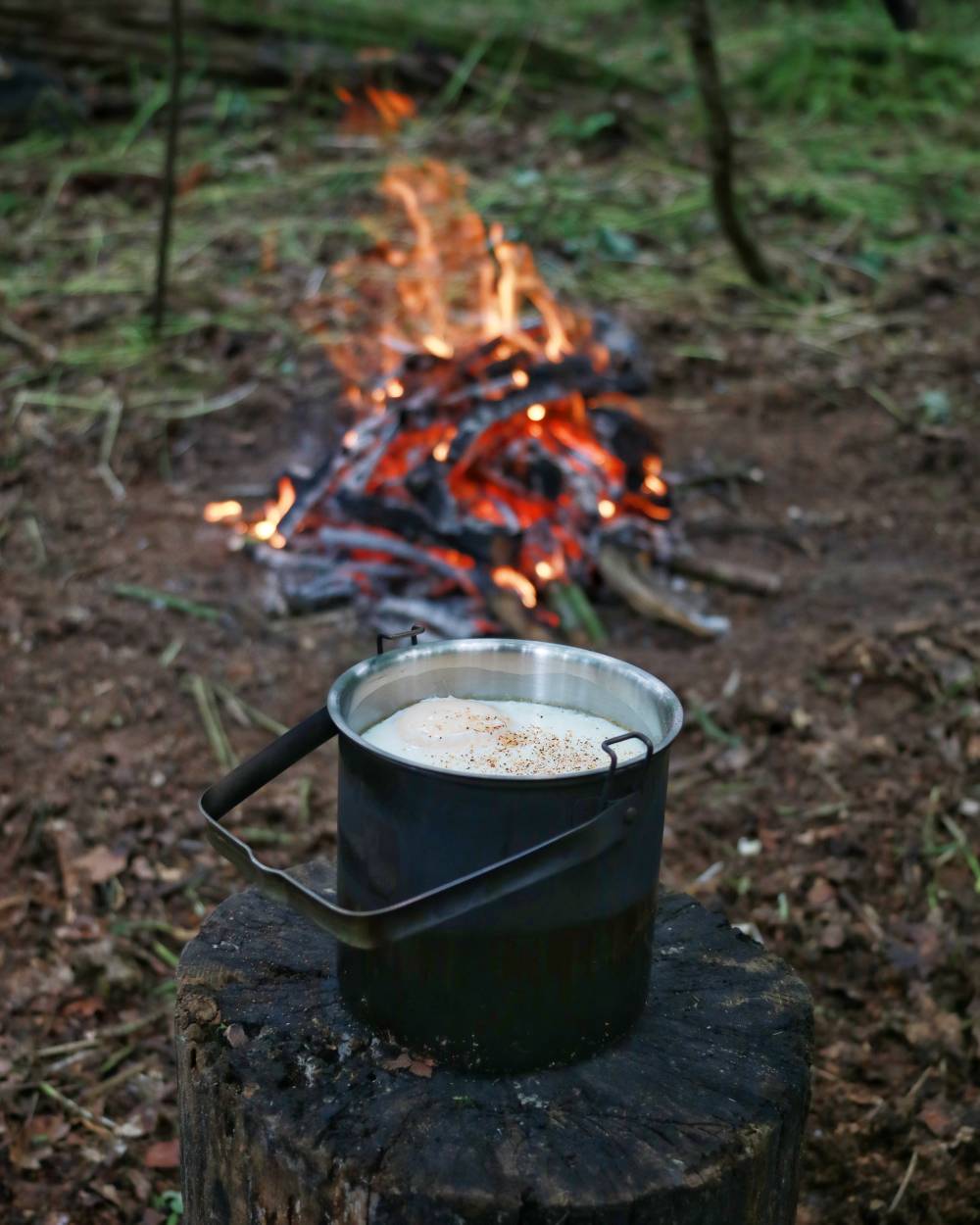 Sitting back drinking coffee and taking in the sounds of the woods (which included the sounds of a group of kids who appeared to be army cadets walking through the woods singing a boy zone/take that/ some other 90's boy band song at the top of those voices) I let the fire burn down to coals in preparation for cooking, in this time I also gathered the simple materials I needed for lunch. 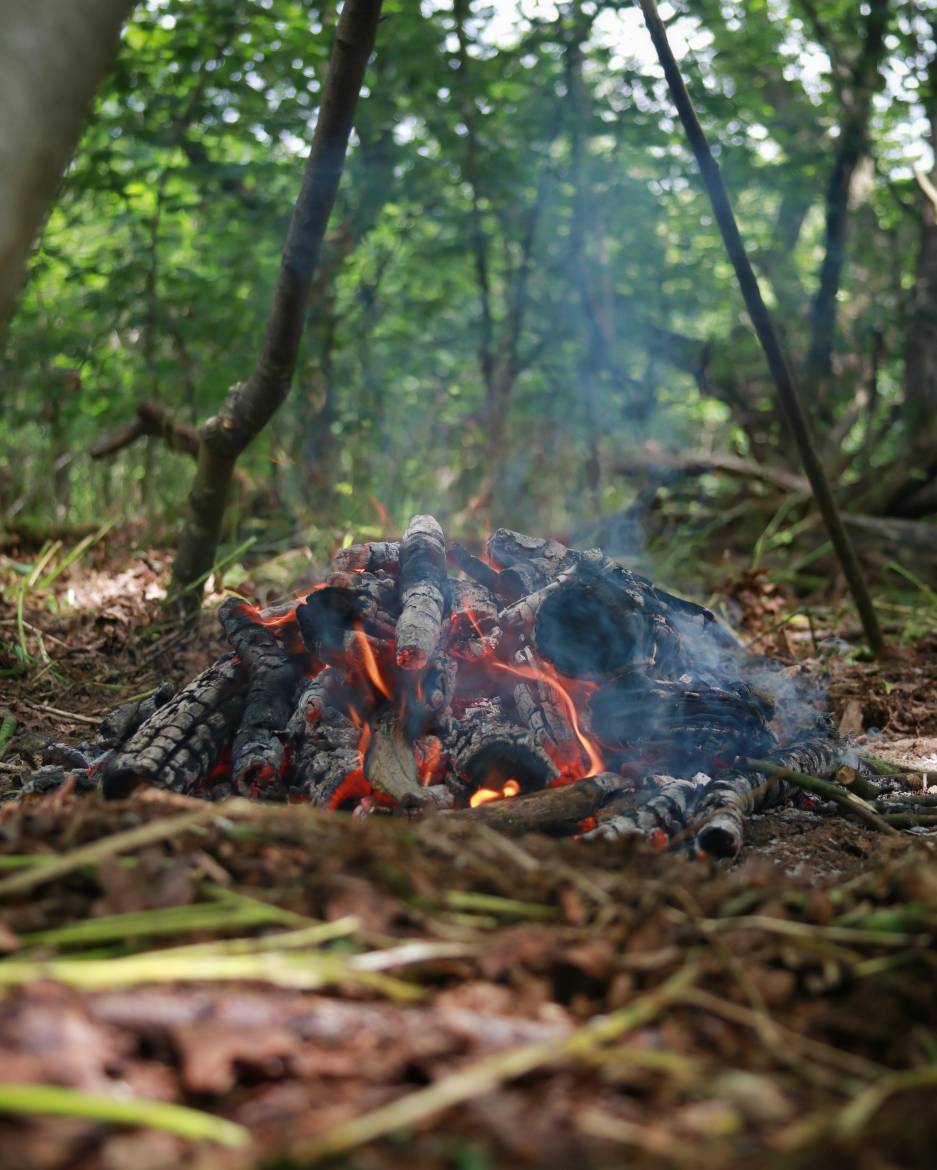 One green stick (stripped of the bark, mainly because I had nothing else to do but point it) some burdock leaves and two logs, one to rest the green stick on and the other to hold the fish in place (easily adjustable by rolling the logs forward and back)

The trout was feed on to the stick through he mouth and the point inserted into the flesh (in enough so it doesn’t fall off as the flesh softens, but not so much it comes through and the fish slides down the stick) 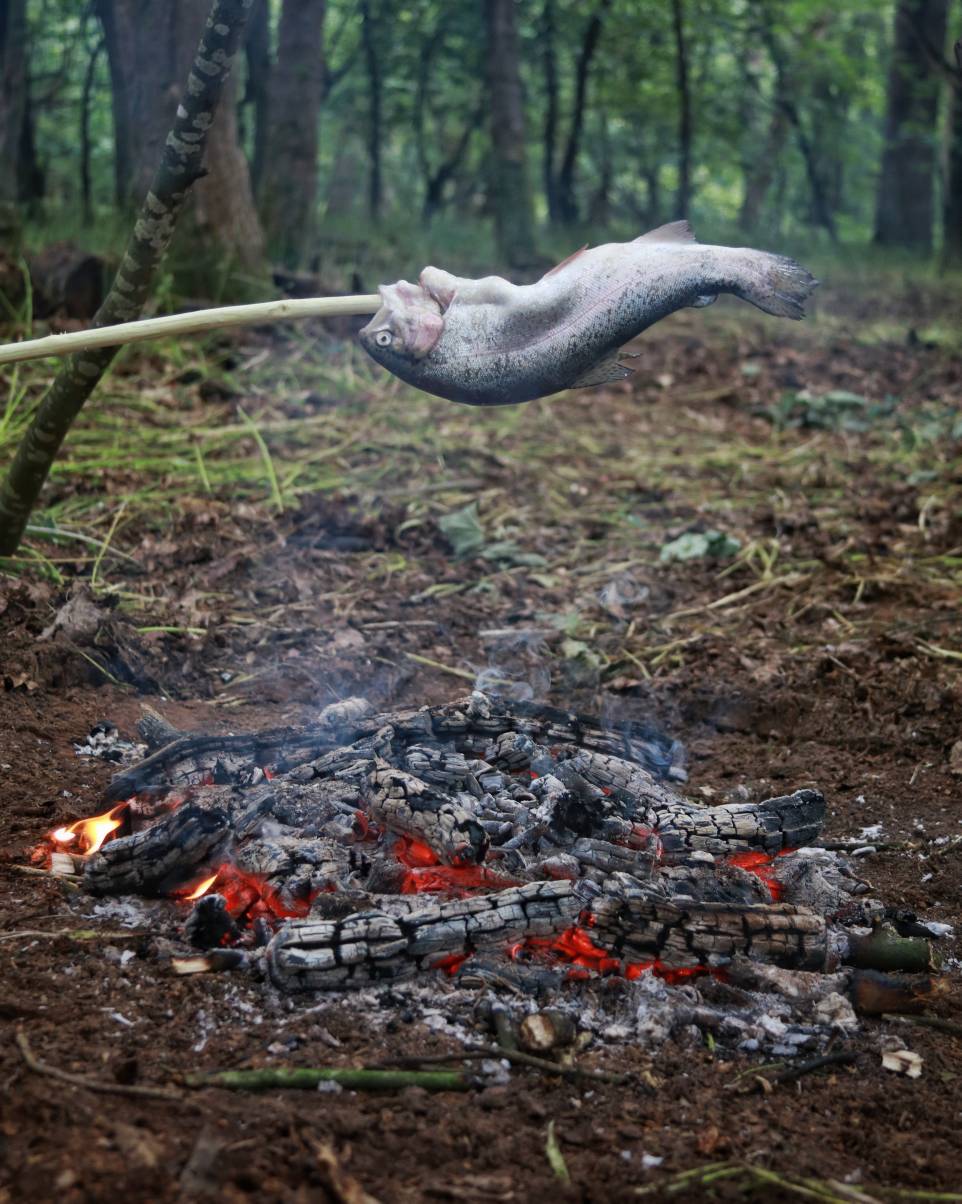 Suspended over the fire at a height where I could hold my hand to the count of 5 seconds. 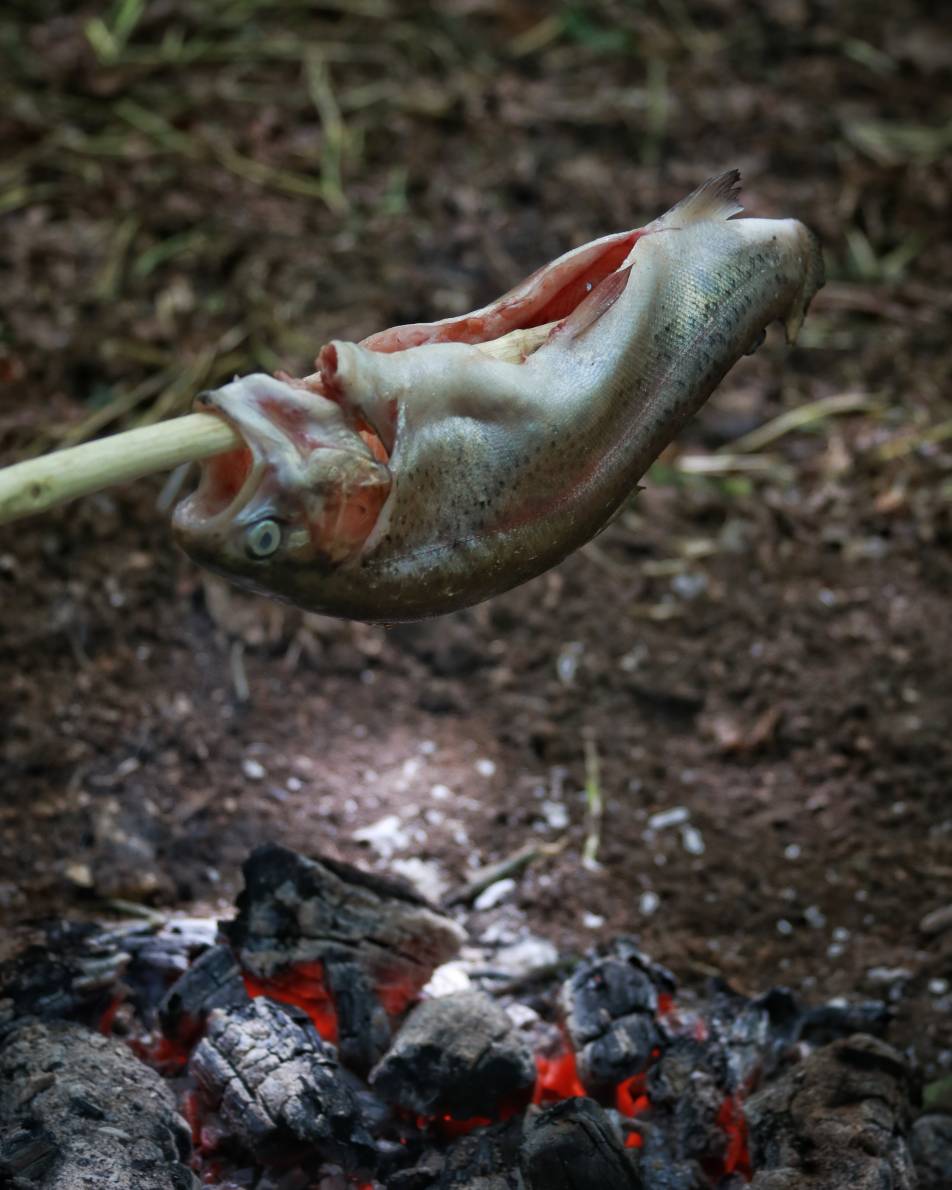 Whilst keeping an eye on the fish as it cooked I set about making a new pot hanger. I found a nice straight length (5ft) of Sycamore with a good sized tick-shaped side branch (this had come down when the Oak fell) this would make a useful adjustable pot hanger with the use of some beaked notches. 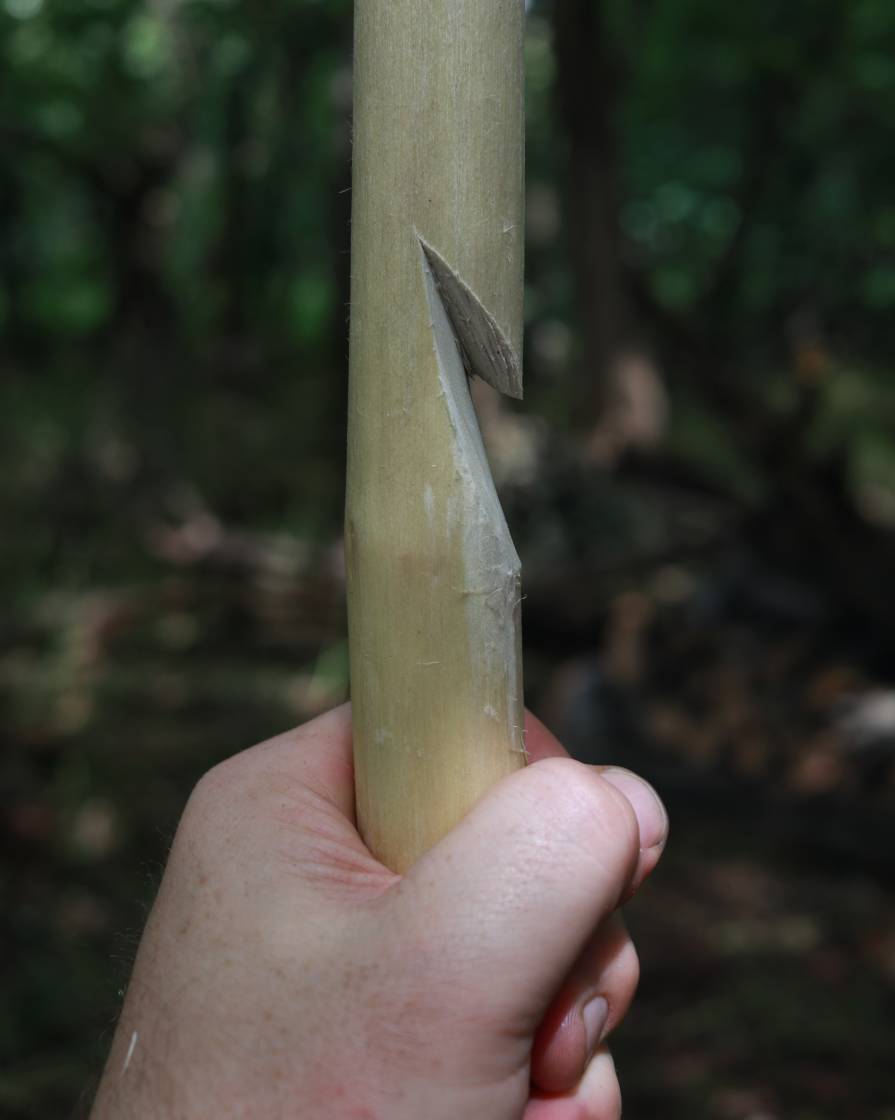 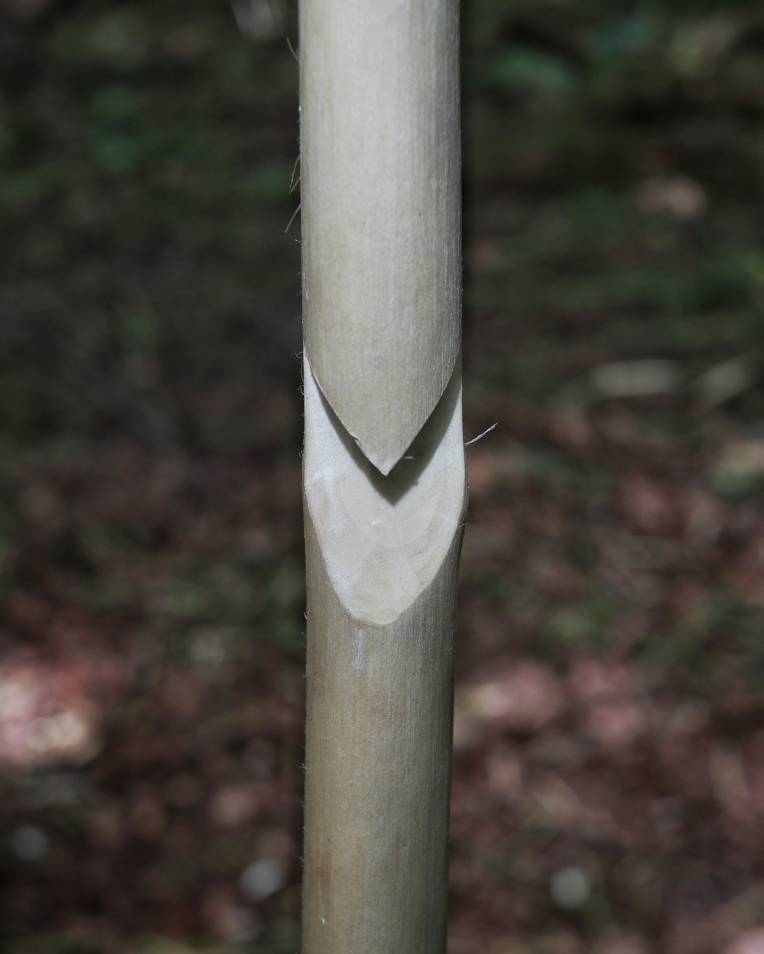 Trimming off any excess material below the join to avoid the lids of pots catching as you put on/take off pots. Also something I like to do when I have the time is shape the end, giving it a rounded shape (and as I said side I had little plans, so I spent some time doing this to give the pot hanger a finished looked) 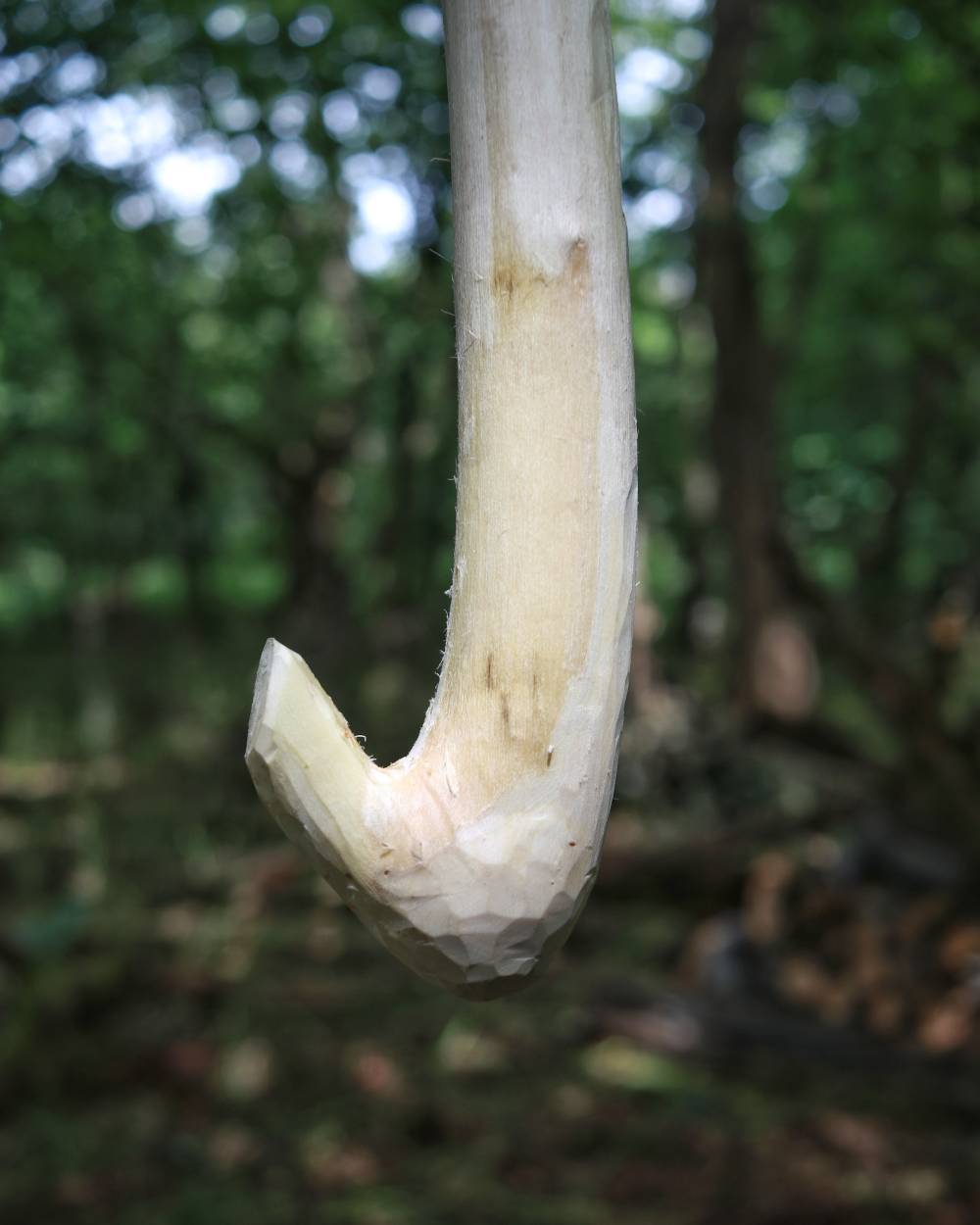 Meanwhile the fish was coming along nicely, adjusting as required. Cooking slowly, not rushing so to burn it.

a little while later... 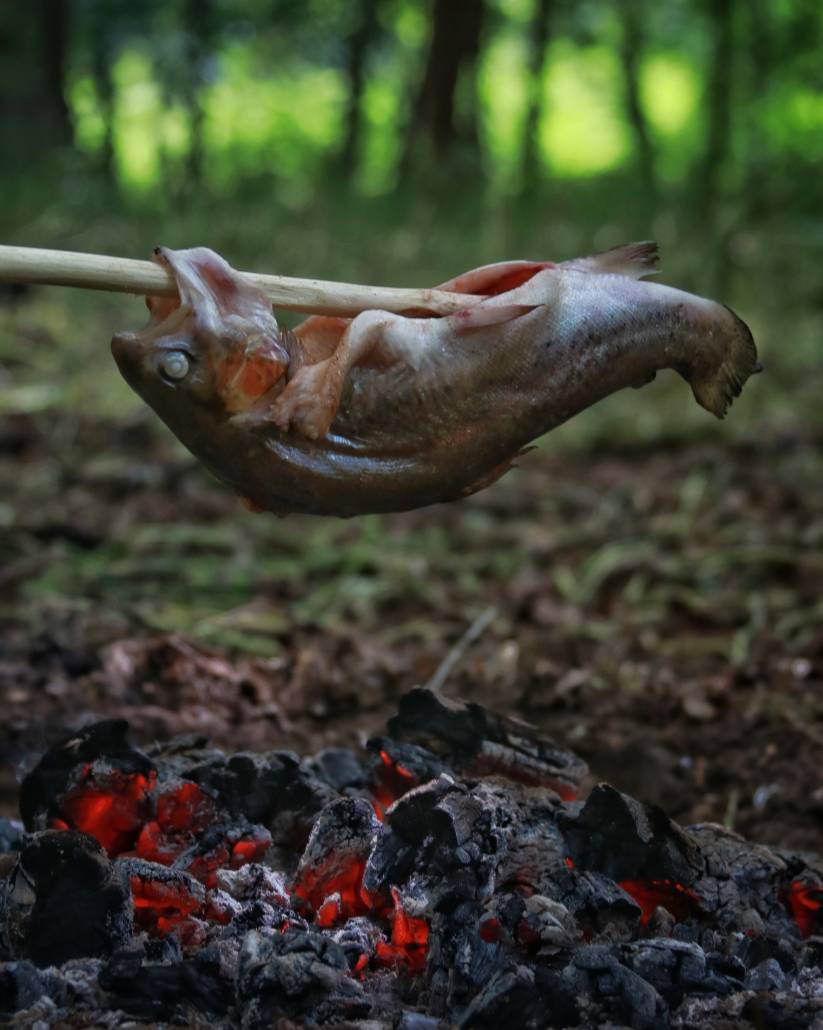 Lunch was served on a plate made from the burdock leaves and eating using some quick and simple chopsticks (but in the end I dug in with my fingers) as the flesh came away from the bone without any effort of fuss. 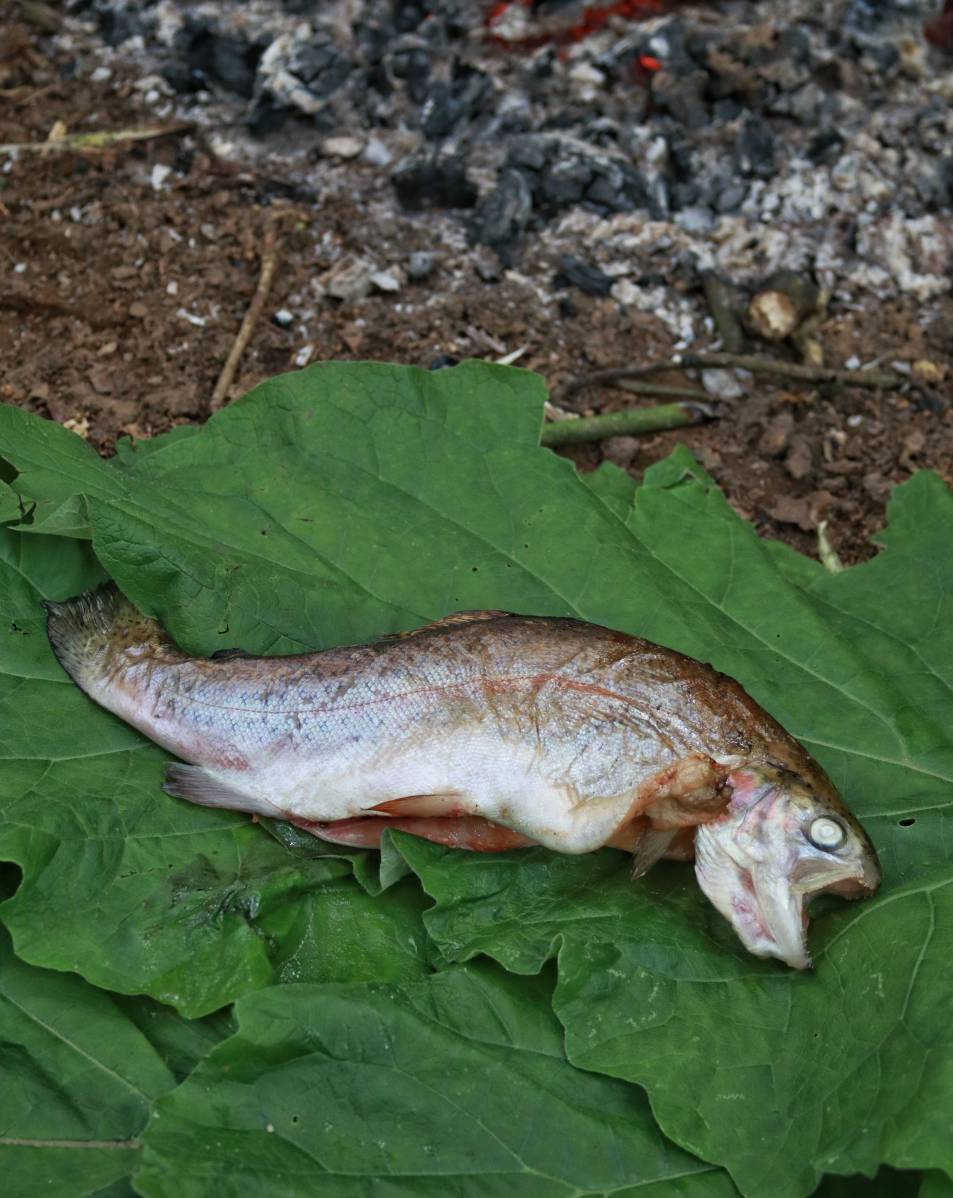 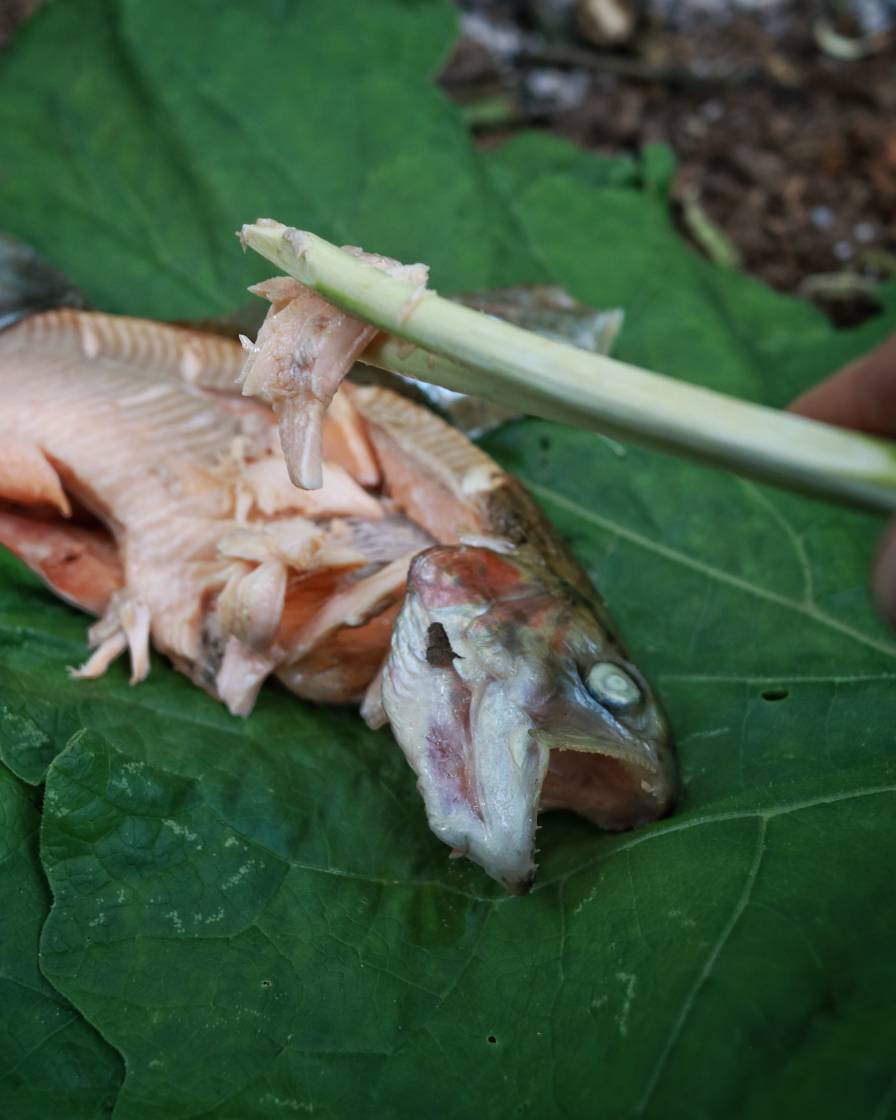 Wash up was easy. 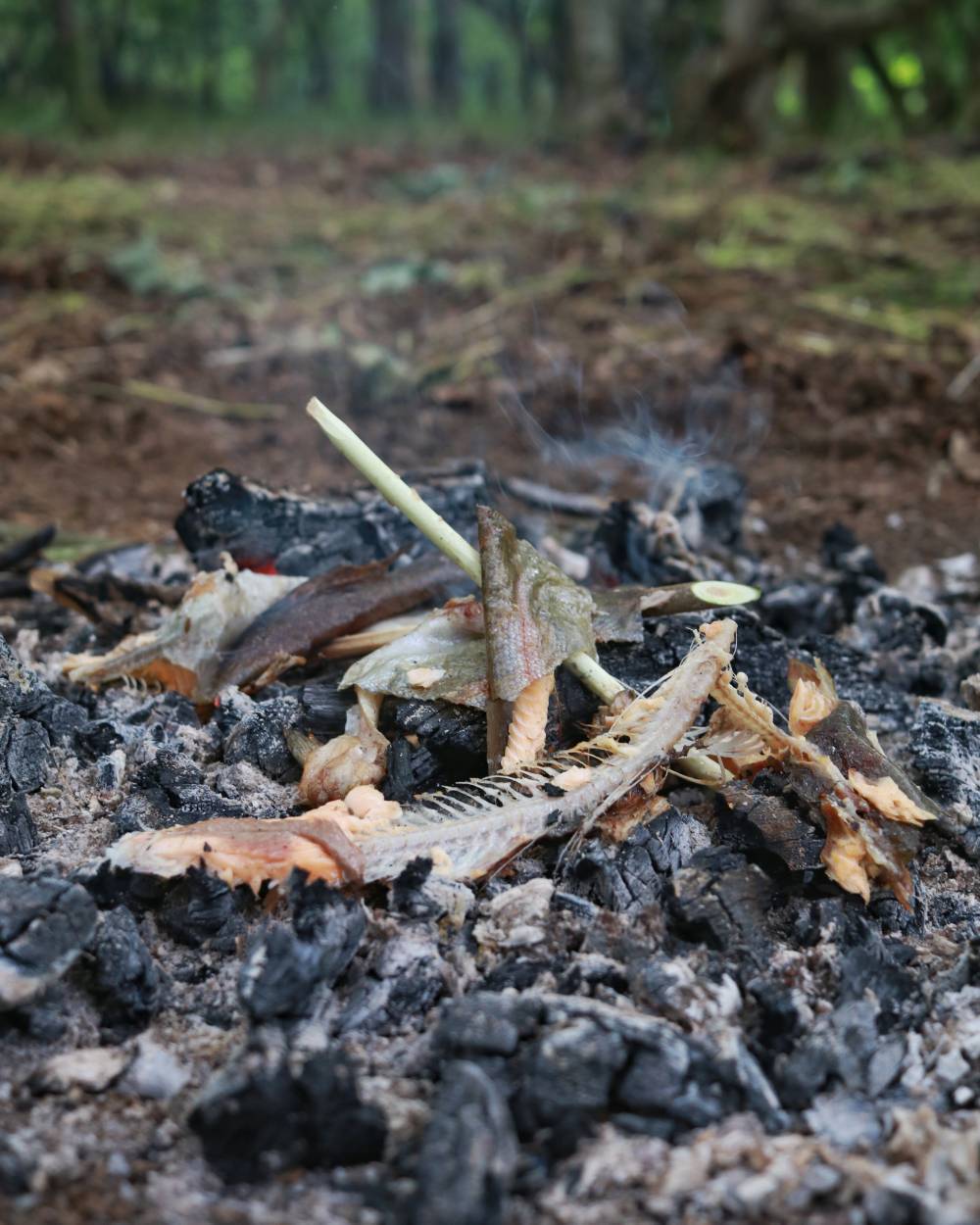 Before heading home, I had something in mind that I wanted to try, a simple method for making a pot hanger. Using my handy Victorinox Farmer I got a small branch with a tick-shaped side branch and use the reamer to bore a hole through the main branch. 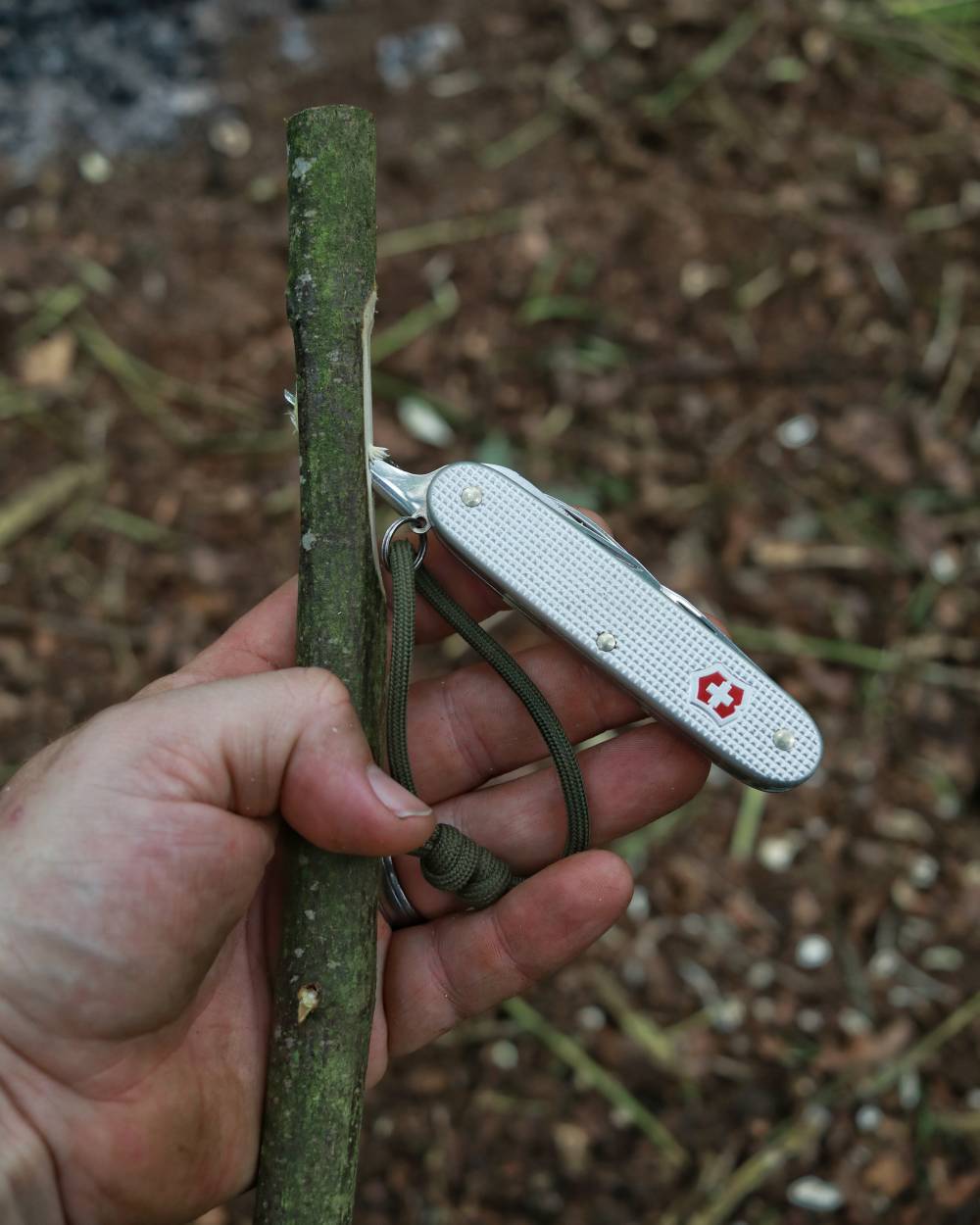 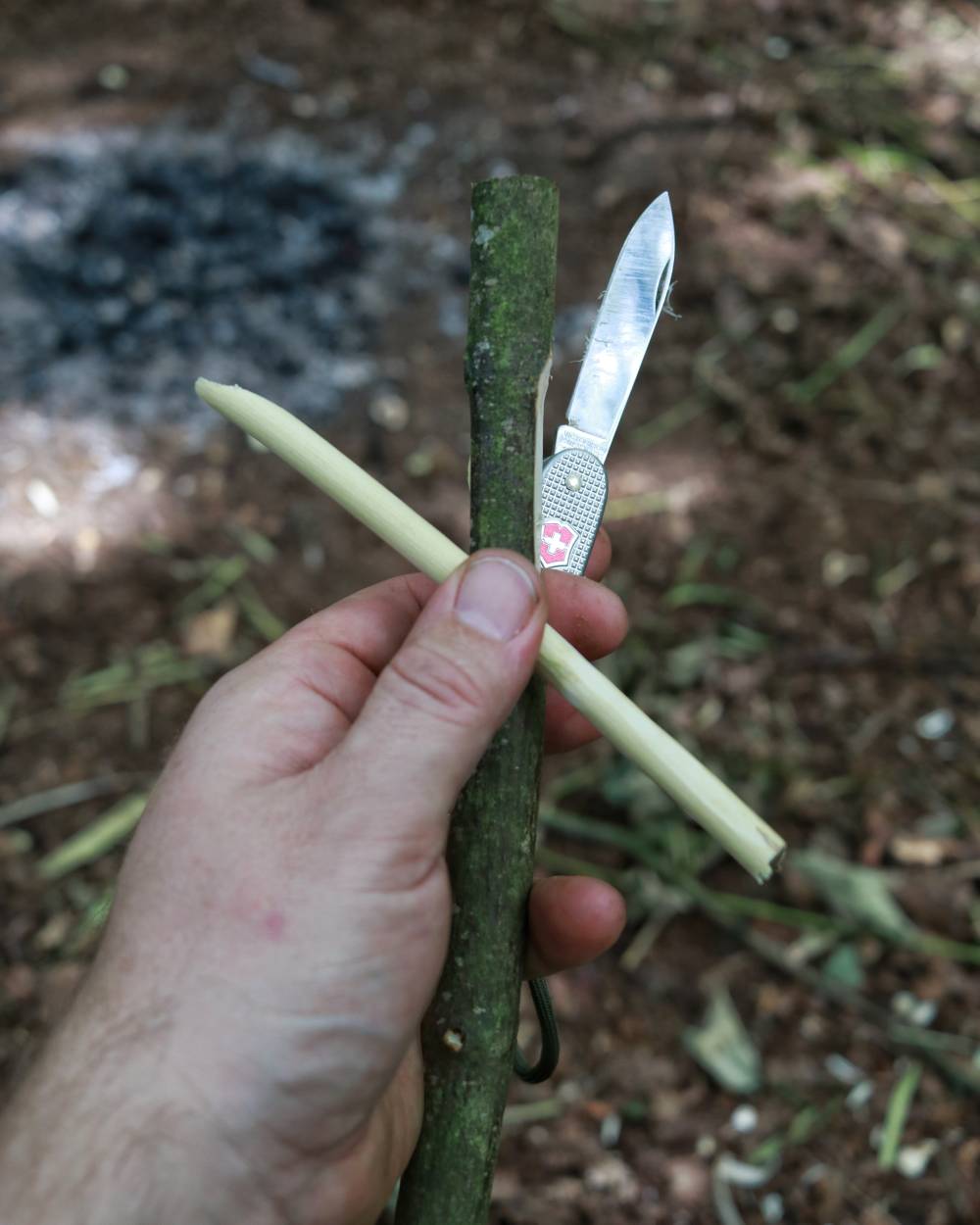 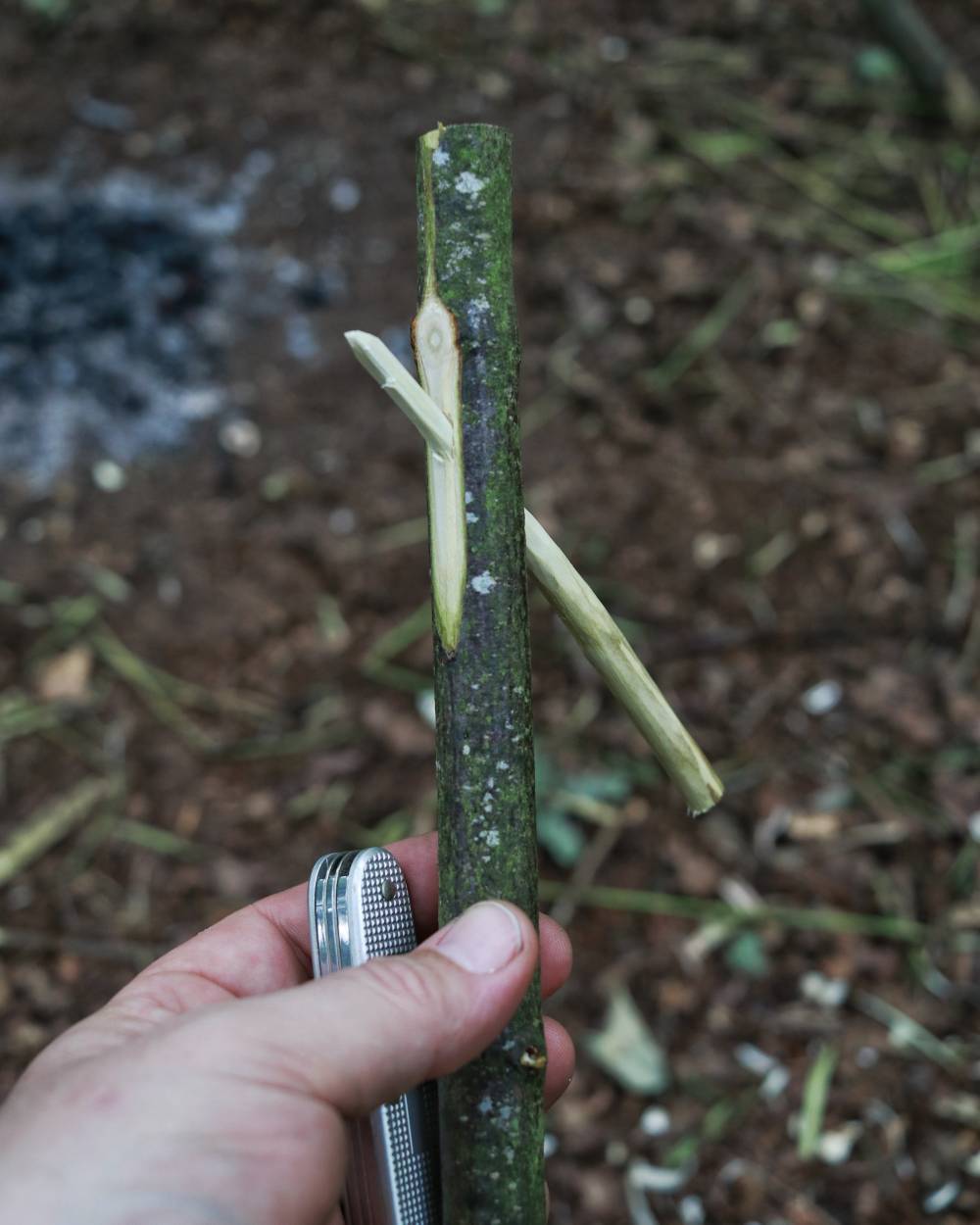 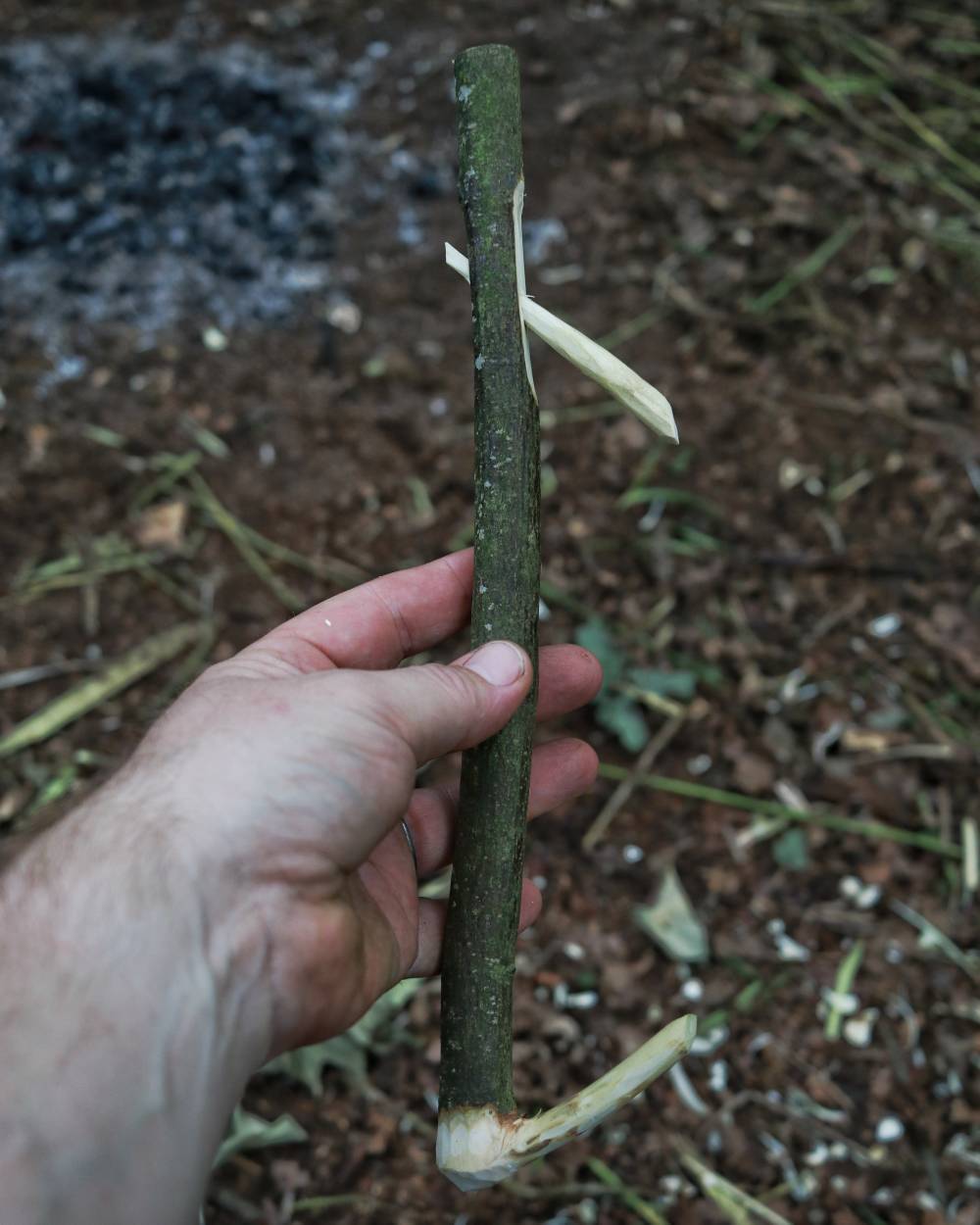 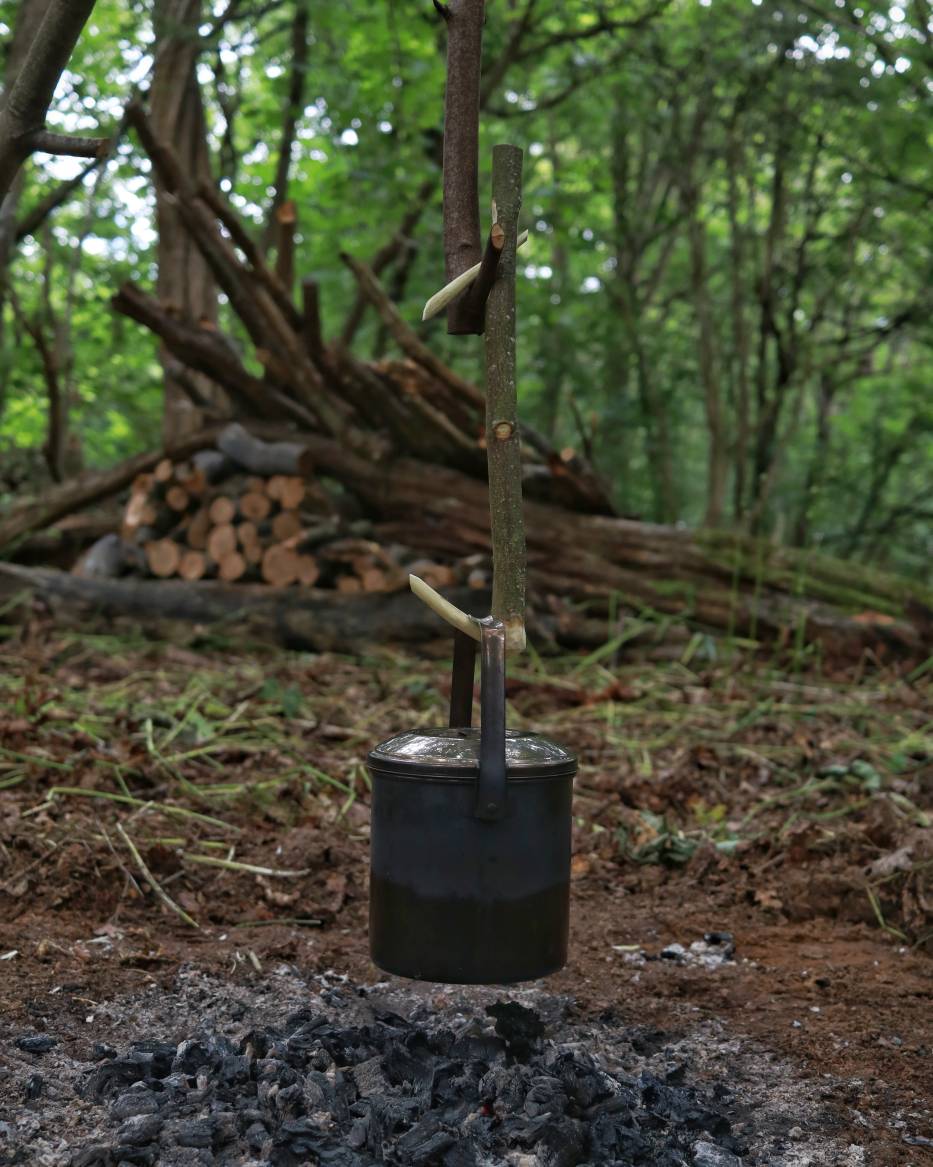 or placing a pot higher to keep something warm over the fire. 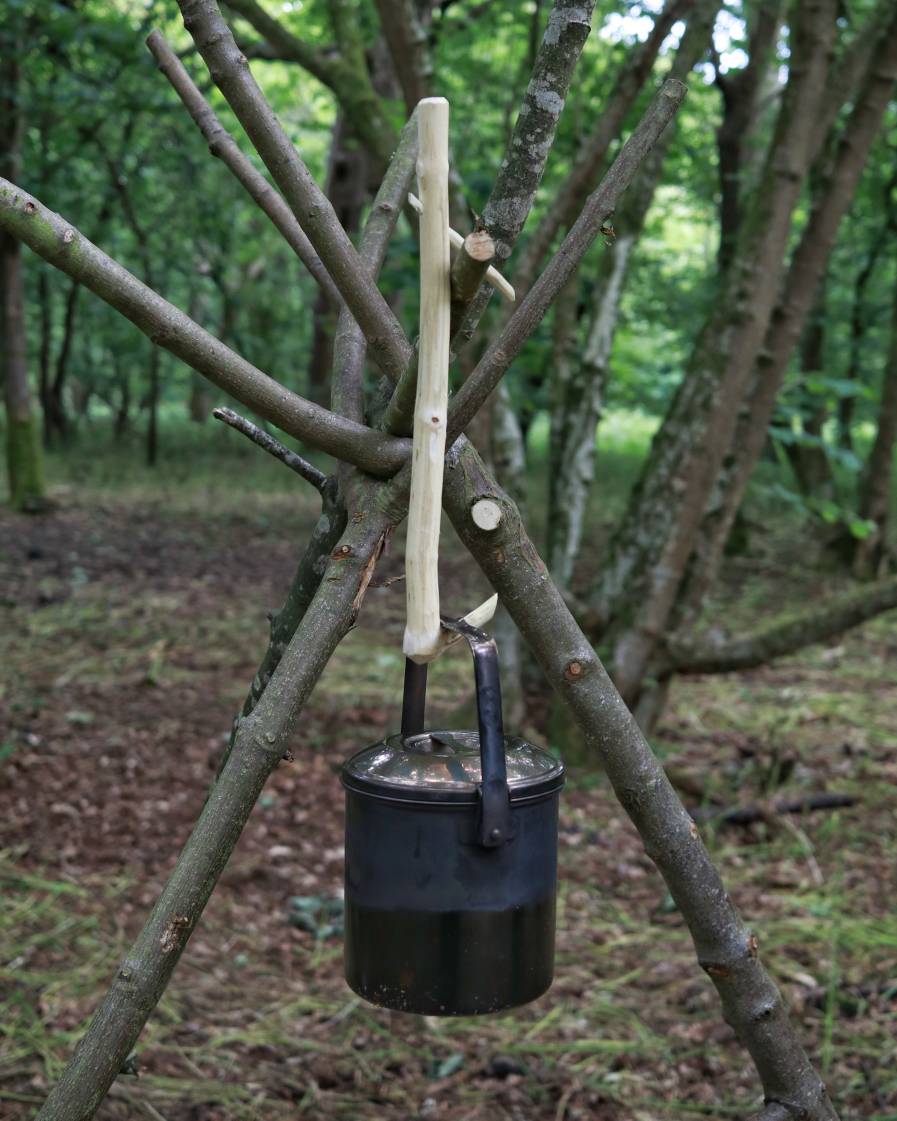 or on a side branch of a tripod leg. 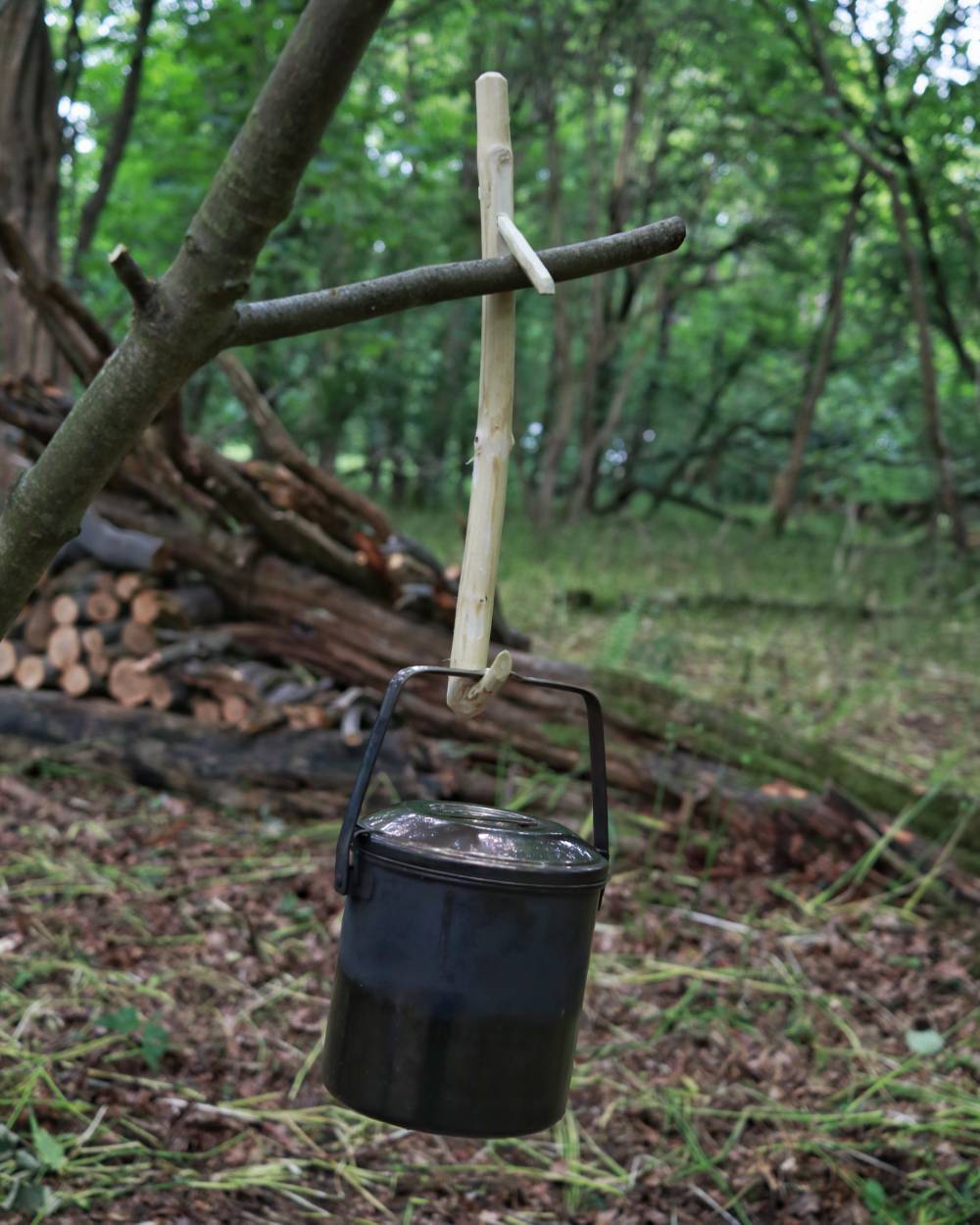 With that final small project done (there were some others that I did of camera) it was time to clean up and go home.

Ready to return another day.

Apparently I can only put up 20 photos at once. So heres the boring but important process of cleaning the fire site. 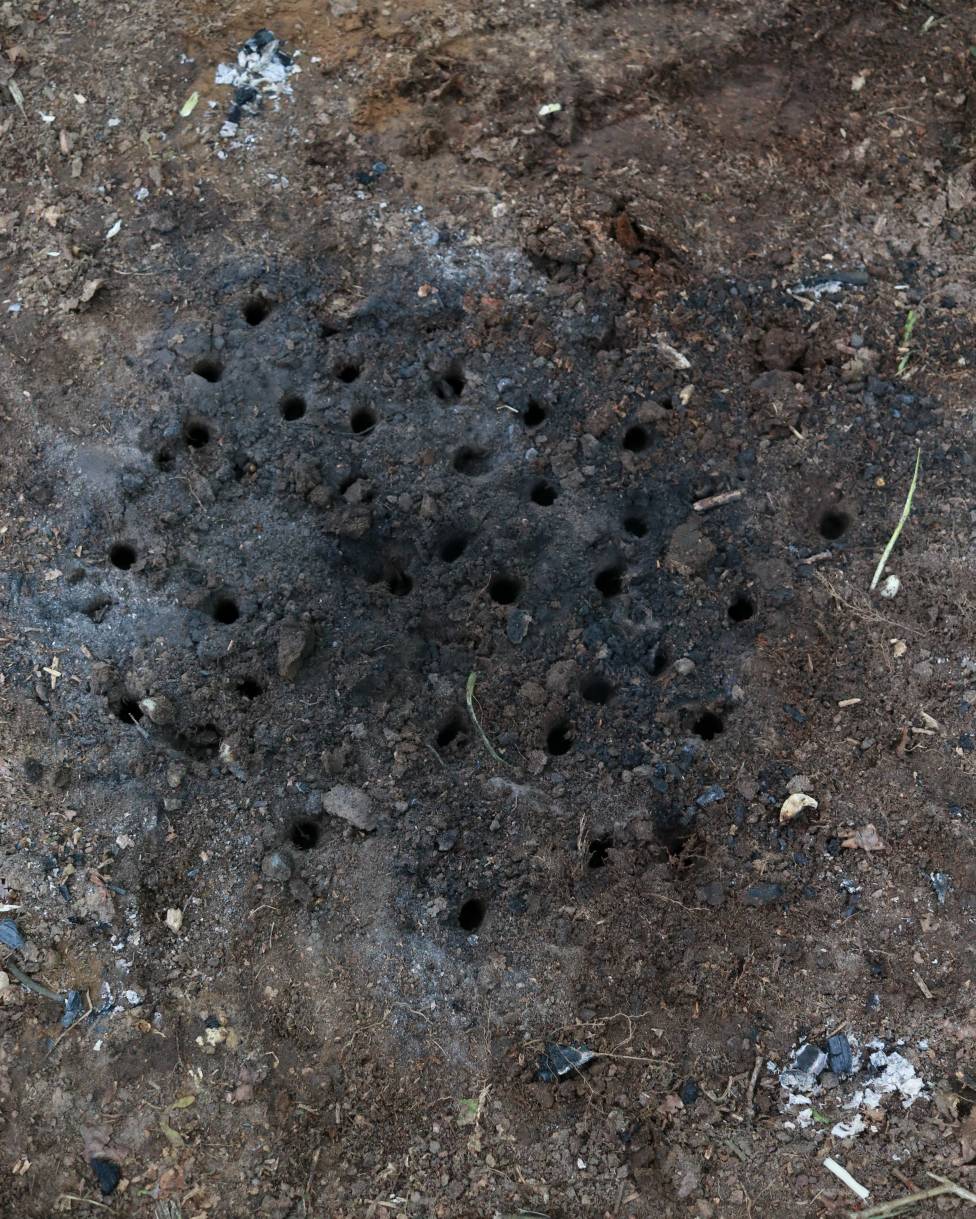 Sent from my moto g(6) plus using Tapatalk
Reactions: JohnC, Snufkin and Riven

Excellent stuff Tank, lovely pics and it looks like you had a great time, thanks for sharing it with us

Tony said:
Excellent stuff Tank, lovely pics and it looks like you had a great time, thanks for sharing it with us

Thanks . Productive and a relaxing time.

Sent from my moto g(6) plus using Tapatalk

Very impressive and thank you for sharing
Reactions: Tank

Looks like a great day out in the woods. Thanks for sharing.
Reactions: Tank

Great write up and pictures Tim.
Reactions: Tank
You must log in or register to reply here.

Out and About Dec 28, 2020
Suffolkrafter
S
V
A nice cup of hot chocolate

Day Out The Fallen Oak (pt1) - Buck Saw and Steak

Out and About Jun 2, 2019
crosslandkelly