And now a fully reversible sheepskin jerkin!
Made from 2 old sheepskin coats from which I removed all the modern sewing, leaving me with some very small pieces of plain sheepskin..., printed with all sorts of trade info on the flesh side!, I sanded this off as much as I could... sewn by hand using artificial sinew ... and lots of swearing (I do not like hand sewing!) I am pretty happy with the result and wore it to work today for a Stone Age experience for a local school run by the Nat Park archimolologeek and Park Education Ranger.... everyone seemed happy! 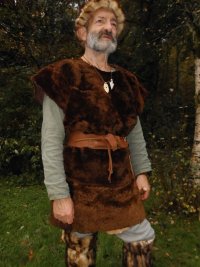 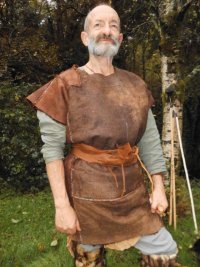 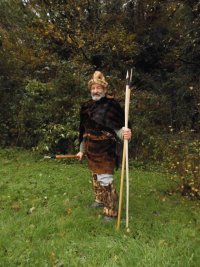 John you have outdone yourself. You have brought Gucci to the stone age!
Reactions: Tsantsa, Erbswurst, Robson Valley and 1 other person

Catwalk, 2,000BC.
Britain has a reputation here for a lot of rain. What did the paleo people make and use as shelter from the rain if, say, they were out fishing or hunting?

I have not seen much evidence for anything except Otzi's grass cloak and possibly (oiled/greased?) leather cloaks. Once fully soaked (when I washed it - one of the coats had been up at the hillfort for more years that I care to recall ... and if you put something on the floor in the house it was in that object is filthy in a second! So much dust from the floor! Greasing the wool - and/ or leather side of a sheepskin helps it shed a lot of water (ask a sheep how it copes on the hill all year ) but immerse a sheepskin until it is sodden and it takes an age to dry (ask a sheep after it has been dipped!) Ethnographic comparison, seemingly, points toward oiled leather cloaks....
Reactions: Robson Valley

Or did it rather snow without intermission?

In my opinion Ötzi was carrying snow shoes and no pack frame.
I think they found a hunter who slept in his warm clothing by the fire after a nice barbeque. No trekking equipment on board!

Although Otzi is one of my points of reference I am also looking at the rest of Meso/neolithic times ... and yer - it rained!
Reactions: Erbswurst

The Japanese wore the grass cloaks for rain.

And they have very heavy rain. Lots of rain but many dry days.

Britain has less rain but many wet days.
Reactions: Erbswurst and punkrockcaveman

The weather in the British Mesolithic and Neolithic periods changed considerably - we are talking about a period of 9,000 years.
Reactions: FerlasDave, Erbswurst and nigelp

This weekend, on one of our monthly weekends in the woods, my good pal Roly gave me a Roe Deerskin he had tanned ages ago. I imediately saw this bag in it!
I simply trimmed and oiled the hide and thonged it together with leather strips and added a veg tan shoulder strap - job done! 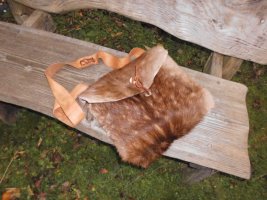 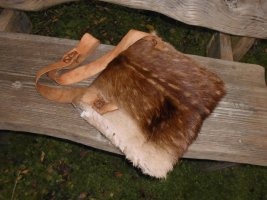 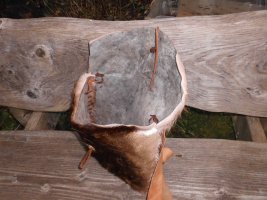 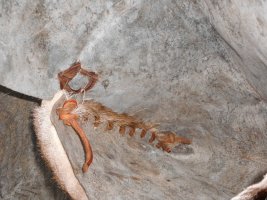 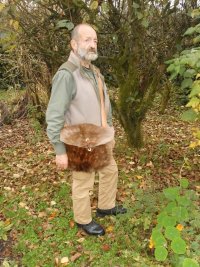 You're going to have to grow your hair long John

I have just finished my Goatskin suit... bring on the Aurochs! 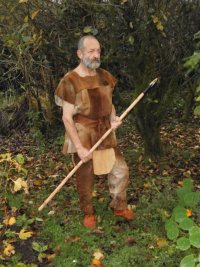 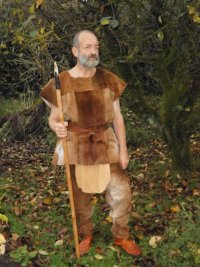 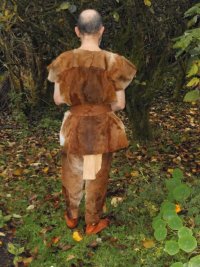 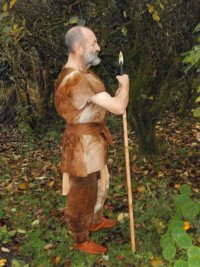 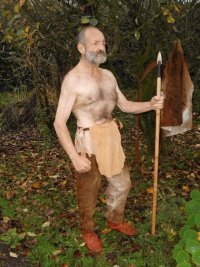 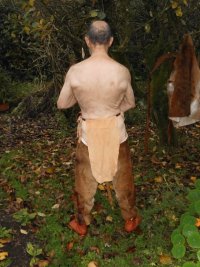 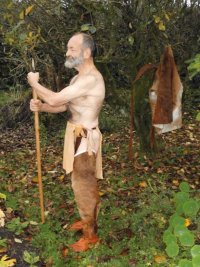 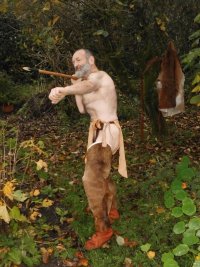 And a quiver for my arrows....
Cow hide and hazel 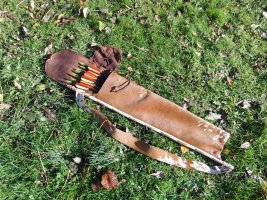 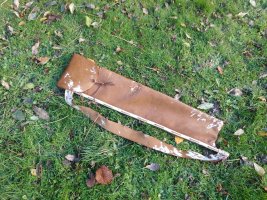 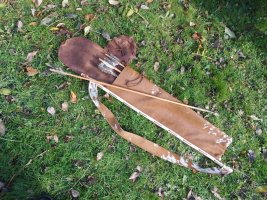 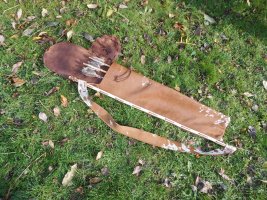 A few more arrows .... my skills as a fletcher do not improve!
In fact, if the cry goes out that bowyers, fletchers and archers are needed then I might as well go and play with my Barbie collection .... I have made (with help) a couple of passable bows, my arrows fly OKish but I am useless on the archery range (except as a target!). In the Stone Age I would have starved!
Goose feathers, sinew thread pine resin and beeswax glue, hardwood shaft, stone, bone and antler heads. 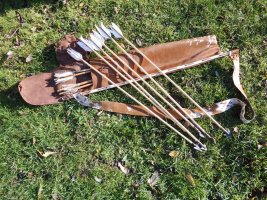 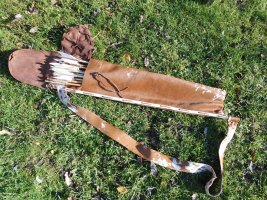 As a sometime hobby bowyer and fletcher (..leather worker, Horner….etc etc) the quiver and arrows look good to me. Perfectly primitive. The stiffener of the quiver is redolent of recent antiquity in North America, but evidence of the same kind of tech was found in other locations including Europe, iirc.

In my mind, split quill feather fletchings were a relatively (!) recent innovation, as it is far easier to use peeled fresh feathers, and/or whole small feathers for fletching. When I say peeled feathers, I mean feathers where the barbs are peeled/stripped from the quill (rachis), being held together by a very thin section of the quill surface material. Maybe have a look at the Eastern Two Fletch as an example of using two part peeled but whole small feathers? With a small amount of natural sinew binding they look every bit stone age

Cheers for that
The quiver is based on Otzi's (Copper Age)

And a ground slate spear and arrow head (after Scandinavian examples) plus an archery repair kit (Glue ball, feathers, sinew and rawhide).... arrow heads are quick to make compared to finding bits to repair kit in the field! 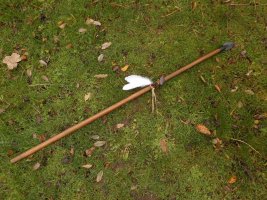 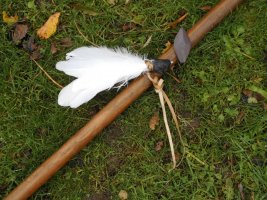 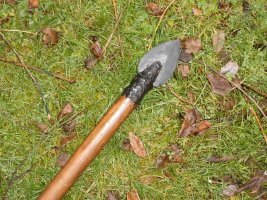 John Fenna said:
My work now includes, not only interpreting the Iron Age for school kids, but also the Stone Age.... so a new costume is being made!
So far I have made a fur cape (well - it is the back of an old fur coat held with a bone pin/limpet shell ring "penannular broach" type thing that I made ages ago) and now a few bits and pieces, roughly based on Otzi's kit and other established finds.
The main piece is a stone hammer made from a water worn pebble/cobble and a hazel pole. the hazel was split down to half thickness and this bit was boiled and wrapped around the stone, into which I had ground a "waist" to take the hazel. This was all bound into place with rawhide (from a dog chew) and waterproofed/glued with good old pine resin/beeswax/charcoal glue. For looks the handle was whipped with leather and a leather end binding put in place.
Also made were some antler beads/washers for toggles on pouches etc, an antler/chaga/antler bracelet, a mending kit tassel of thongs with an antler toggle, a couple of bone arrow heads, an antler javelin point, an antler/hazel "retoucher", an antler point an antler tine and a flint and a volcanic glass flake as well as a small pretty hammer stone for flint work View attachment 69535View attachment 69536
My kit will also use various bits I have made previously like some of the bits below - plus others
View attachment 69537View attachment 69539View attachment 69540View attachment 69541
My next challenge is making a set of clothing ... I have just ordered a bunch of goat hides (like the one in the first photo) to play with ... and I have raided the local charity shops for fur/sheepskin coats
Click to expand...

Are these items copies of authentic original tools?
Keith.

To the best of my ability
I base my pieces on finds from Skara Brea, Otzi, Star Carr,, various Scandi finds and work with other ethnographic ideas that use similar tech such as Australian aboriginal pieces, North America's stone age cultures etc.
I try to use equivalent materials but often use modern tools to make the items - such as modern abrasives, steel tools etc
Reactions: Robson Valley
You must log in or register to reply here.