Has anyone made any personal Modifications to their Shemaghs ?

Having had both, I'd plumb for the shemagh, as it's more versatile

Don't know where my scrim went, last I saw it I was using it to clean windows about twenty years ago.
Reactions: Minotaur

TeeDee said:
Has anyone made any personal Modifications to their Shemaghs ?
Click to expand...

You mean like embroidered their name on it or sewn on scout badges.?
Reactions: Minotaur, TeeDee and Bishop

Lean'n'mean said:
You mean like embroidered their name on it or sewn on scout badges.?
Click to expand...

Not quite but I do like the personal touch.

No , I meant I've a couple of ideas to implement that I think will only add an extra layer of usefulness to this ubiquitous item. A couple of small physical alterations.
Reactions: Minotaur

Personally i find the shemagh has too much material and is too bulky.
I much prefer a cheche
https://ukmcpro.co.uk/products/french-army-cheche-scarf (just the first link i found)

I used to use a scrim scarf everyday either as a scarf or face covering when i was gamekeeping/ deer stalking but outside of that it isn't really that useful.

Cheche all the way for me...
Reactions: TeeDee and Minotaur
T

TeeDee said:
No , I meant I've a couple of ideas to implement that I think will only add an extra layer of usefulness to this ubiquitous item. A couple of small physical alterations.
Click to expand...

Now you mentioned that you just have tell them.
Reactions: Minotaur and TeeDee

TLM said:
Now you mentioned that you just have tell them.
Click to expand...

I will do , Just casting the net at this point for the collective mind to chip in before I start.
Reactions: Minotaur
M

Erbswurst said:
A triangular boy scout neckerchief as first aid item and more optional uses, OK, why not? But such a bulky shamagh?
Click to expand...

Make your own, one of the many things they have done to the uniform over the years is make the neckerchief smaller so it does not work as a sling anymore.
Reactions: Erbswurst
H

I have a british army knitted necktie I use to cinch closed the neck of my anorak. Or any other jacket where it is needed. 52 inches long. 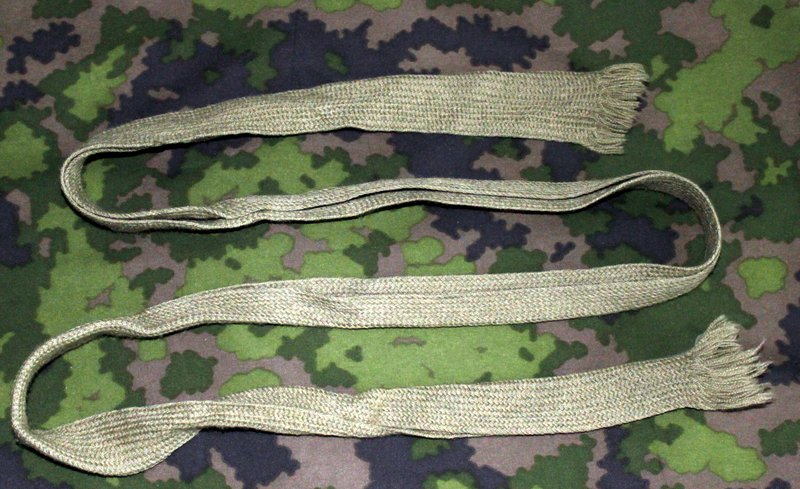 Shemag or whatever you call it when it is in green - I have the cheap (Chinese?) one. The basic example of a multiple use item.
Reactions: Minotaur

A little while ago I found that cowboys used to wear very large silk squares ... sometimes called wild rags ... up to 42" square and highly decorated. Don't see them much in westerns, like, but they are big with re-enactors and I think people still just, you know, wear them as day-to-day in some places.

You see lots of them in saddlers. They are worn in a variety of ways, with complex knots or highly wrought, silver clasps/woggles. Guess they shared some of the purposes of a shemagh.
Last edited: Feb 20, 2021
Reactions: Minotaur and eraaij

@Minotaur
In Germany we have a lot of different boy scout associations, but nobody got the idiotic idea, to make the neckerchief too small to use it as a first aid item.

The German army issues the same in Flecktarn and older plain OD ones are still available too.
M

Erbswurst said:
In Germany we have a lot of different boy scout associations, but nobody got the idiotic idea, to make the neckerchief too small to use it as a first aid item.
Click to expand...

The Scout Association and idiotic ideas go hand in hand, My personal favorite was when they changed the year of the start of the scouts and no one noticed!
Reactions: Erbswurst

Minotaur said:
The Scout Association and idiotic ideas go hand in hand, My personal favorite was when they changed the year of the start of the scouts and no one noticed!
Click to expand...

But my question is why do people do that, where’s the sense in it. Both changing the date and the idea of a clothing item with more than one use.
Reactions: Minotaur

I ditched the scrim net scarf as soon as I discovered shemaghs, the scrim net was not very versatile but it did keep you warm. The shemagh on the other hand kept you warm and also can be used for a variety of other uses, I've used mine as a blanket on a Cyprus beach while waiting for the boat, to carry extra ammo, a mat for cleaning my weapon and a whole host of other things I've forgotten.
Reactions: Minotaur and TeeDee

Youth organisations are easily taken over by idiots. For this reason we have for sure more than 100 boy scout associations in Germany. Instead of investing time in some kind of revolution people just leave the old club and found a new and better one. It's obviously time to do it in Britain.
Reactions: Minotaur and Billy-o

I have noticed a merino travel scarf popping up in searches recently (I am in an extended process of replacing much of my worn out merino and ringing the changes). Sometimes 2' square; sometimes 2' by as much as 4'.

Trying to work out how they work and who they are aimed at. They seem large and bulky for what I am used to ... but they might have a bunch of purposes that I cant yet figure out. Handy for burying your head or keeping warm on a long flight, for sure.

I see merino neck gaiters a lot now too ... the ones I have are synthetic, though I can't think how I accrued three. I can see a new wool one in my future. Those things I understand. More appropriately compact and less rumply than a Buff. I feel Buffs are bit overrated, or just overmarketed perhaps. Lost mine (or one of the kids did and isn't saying ). I wasn't heartbroken beyond the usual sensation of annoyance at losing things.

I like linen clothes and find a linen scarf is difficult to beat in Summer - breathable, absorbent, can towel, doesn't smell, dries quick, good to wet and put on your head to cool you down. Pretty useless at keeping you warm though.
Last edited: Feb 21, 2021
Reactions: Minotaur and Erbswurst

Ok my ideas , not saying they are good ideas - just ideas and still willing to listen to others if anyone can throw some in.

1) I like wearing my Shemagh so that it forms a sort of Snood ( I believe that is the modern term ) but when I try to form it after a bit of random movement I find the end comes away and its just hanging around my neck.

I did contemplate a woggle of sorts to keep it in place and but realised that may attract some cracks from the narrow minded.

So a better alternative I think is a small soft Leather fob sewn into one edge with a moderately tight keyhole type opening so one can take one end , insert it through the keyhole which then because its a friction tight fit allows one to cinch it up or loosen it off and it stays at whatever position you want without constant readjustment.

2) Pull Cord bag. - A thin piece of cord sewn under the perimeter of the bag ( probably required another piece of fabric sewn on top ) but left with a small 'pull fob' connected to the Cord will create a large version of one of those make up type bags I see all the beautiful women own. This would allow one if they found a natural resource ( Fruits , moss, leaf litter... erm... Gold coins ) to pile a large amount in then cinch the whole thing up quickly and efficiently to transport.

I may have seen something sold on the old SASS webpage called a ' Go Bag ' if the make up bag metaphor puts you off.

3) Bag for life. - This maybe a good or bad idea due to the amount fabric bulk - I'm not very good at remembering to travel to shops with bags but always tend to need them. Not that this is purely intended for shopping.

Take TWO Shemaghs , sew Three of the edges ( creates the bag ) and then sewn a piece of webbing to the inside of the Shemagh pocket to create a very chic shoulder strap thingy. And then bish-bash-bosh you have an impromptu Tier 1 operator handbag.

I washed mine a few days ago, that's about it.
Reactions: TeeDee
You must log in or register to reply here.