For some reason, a lady was selling a large bag full of scissors (on Facebook). I thought I spotted a few pairs of decent fabric scissors in there so thought it was worth a punt. Turned out that there were only a couple of pairs of fabric scissors and 23 pairs of nail scissors, plus some decorative edge ones (which for the entire set is about £4...) and some general purpose school type, 35 pairs in total. Not a massive bargain, but I spent an enjoyable hour or so refurbishing the dressmaking scissors. One of them needed a new screw as it was completely stripped. Enough metal to get an M5 screw in there. The other pair, Japanese, were quite rusty at the pivot but a scrub with some light sandpaper and wire wool soon had them looking neater. A thorough sharpen on a whetstone means they're now both whizzing through fabric.

Very satisfying/addictive refurbishing scissors. My mother-in-law asked me to sharpen her fabric shears (Ikea). They were blunt as anything but now, aside from the last couple of mm, they cut all the way up. If you look at the prices of vintage scissors on eBay, they're often not terribly expensive and if you are prepared to spend a few minutes on them, they'll last a lot longer than more expensive modern ones, I bet.
Reactions: santaman2000 and Robson Valley

You are absolutely right Spandit
A good quality tool is still a good quality tool regardless of its age.
I still use some tools at work which I got on my first day as an apprentice and that's 30+ years ago.
Looked after and used properly they will give many years service.
Chalkflint

Yeah, good scissors can last a lifetime and you're right on getting older pairs for quality, although I do remember a good vid about traditional scissors making that's still going on in Sheffield.

I have a friend who makes scissors and I would not want to attempt them! I happily sharpen them for people though (including hair dressers, who are especially picky about that as they cost hundred of pounds to replace if you cock them up!). Sadly I think Earnest Wright the scissor makers has now closed down

As ever carboots and junk shops are your friend. They rarely want more than a quid and its easy enough to learn how to see if they are worth restoring. saying that even second hand tool shops don't charge much, under a tenner for stuff that was over a hundred new. if you are in a area where there used to be a lot of the rag trade or leather working you are laughing.

Inspired by this thread I just dug out all the scissors and checked them over for rust, needing sharpening or re setting, thankfully not much needed doing ( i keep a big pot of cheepo-nicked-from-work-type -scissors for the family to use and keep the good stuff that bit harder to get hold of so now the just wreck the disposable stuff not the 13" Whitely tailors shears etc. 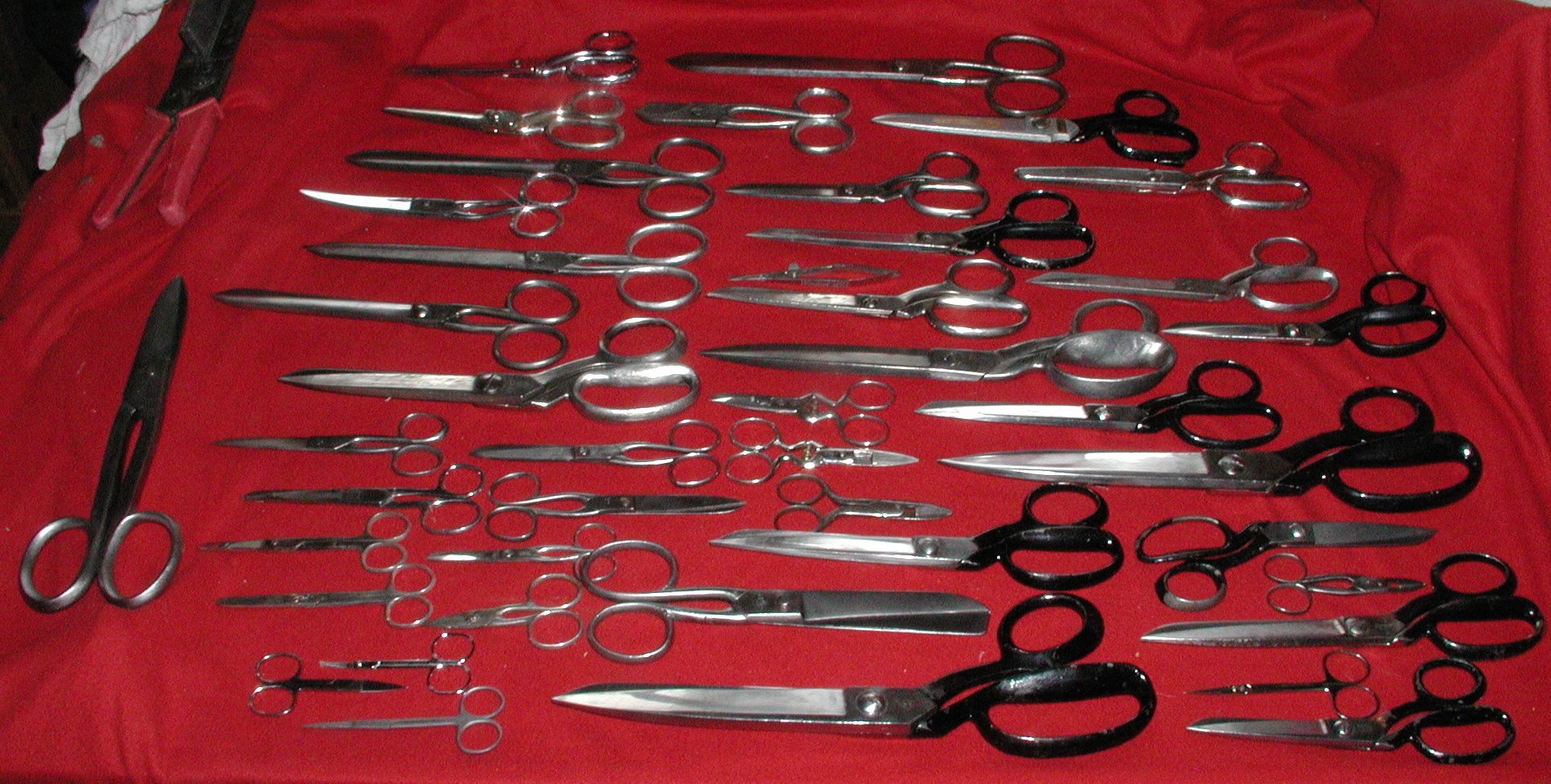 I'd guess 80%+ are Sheffield, the rest German or US. The main thing to avoid is pitting on the inside of the blades/cutting edges and looseness/wear at the pivot point, pitting on the outside doesn't seam to make any difference in usability. Sometimes you can tighten the joint, nut and bolts jobs are the easiest to do and often a sign of quality in the first place. Sometimes you just can't as what looked to be a bolt turns out to be a glorified rivet or the threaded part of the joint ( on the blade opposite to the bolt / screw head) has worn down from repeated tightening There's so many out there that its worth waiting to find one that really only needs cosmetic work on them, if you are bothered by such things. I have a bit of a problem with rust so i tend to go overboard. Ok you can tighten up a rivetted joint but it never seams to last.

Yeah, there's more of them than i thought, and that's not including all the ones I've let friends have.

Was left with 23 pairs of nail scissors. Took them to the local market and sold them for £3 - so the scissors I kept only cost £2. Result.

I have Stew, They're out of this world!!

Have you seen the corsets she makes too?


John
You must log in or register to reply here.

P
Warm and non-surplus parkas for UK use - for females