it will be fine mate, just dont cook it to quick or the outside will burn, appart from that its easy..........

Echoes of the old ways

Just made this one for lunch.. it was lovely
used the oats but missed out the fruit and it just made a lovely oaty bannock.

Raikey the paxo actually sounds really nice, i can just imagine herby sage and onion bread!
i'm looking to do a small bannock mix myself that'll nicely fill the plate of my 12cm zebra, that plus lid in the coals should cook it nicely. that or cooked over the honey and flip it half way.

Milk powder if anyone needs to find it in the supermarket is always over by the soya milk, UHT and milkshakes.

and if you add an egg to the mix and keep the whole thing more 'liquid' than a dough, it comes up even more tasty and fluffy but that's 'erring' towards cake making then! :0)
ad a splash of 'fixed' rum (added essence of vanilla and muscovado sugar) :0) Delicious

lannyman8 said:
i have been useing a very very basic mix which is just the right amount for 1 meal on its own or for 2 meals with other bits.......

add salt or sugar or both, nuts, seeds, or fruit as you like, just put it all into a food bag and give it a good mix, tie the top up with ALL the air removed, when needed just add small amounts of water to the bag and squeez to make a paste, just MAKE SURE you dont add to much water or it will turn into a batter mix.........

have a look at this:- http://www.bushcraftuk.com/forum/showthread.php?t=64584&highlight=brew+and+bread+stove

I've gotta say I'm with you on this. I like simple bannocks and have tried loads of methods including simple and elaborate. My favorite is still a few handfulls of flour, a two fingered pinch of baking powder and a pinch salt. If I want savoury I add whatever I fancy, for sweet I add sliced almond, cinnamon and brown sugar and dried fruit.

If I'm only cooking for myself I use a German mess tin and do a stew or oatmeal in the bottom while a bannock cooks in the top tray inside the tin with the lid on. Perfect every time a easy to do...
Last edited: Jan 6, 2011

keeping it simple leaves less mess and washing up, thats why i like it, but as you say more complex mixes dont really add anything to the mix, for the cost just get some sugar and spice etc as you say, easy and tastey.......lol....

was just rooting round looking for inspiration on how to use up a load of left overs from scout camp. i can say that two parts selfraising flour to one of horlicks lite works a treat!

Sounds nice, made my first bannock last Sunday on the woodburner, it was lush!

Well the Bannock People mainly ate salmon and Buffalo and weren't much for writing stuff down, but they may have done something similar to this.
C

well starting making bannock today.... on the hob because i want to try a few things out before i go

All in a Zip lock Bag, then just add fruit, spice, herbs, garlic as required..add some water then just cook, and eat

durulz said:
I tend to take mine as a ready-mix.
It is:
1 handful of self-raising flour
1 teaspoon of brown sugar
pinch of mixed spice
1 egg (or a splash of milk)
plus whatever you want for flavouring - nuts and dried fruit being favourite.
Click to expand...

Warning, ancient thread revival!
This was however the thread a quick Google brought up, and this the recipe that closest matched the open cupboard in front of me. So, a plan was hatched. Mix a batch (ably assisted by the girls, 3 and 5) take it into our camp in the local woods with a cast iron skillet and my shiny new, waiting to be broken in, Zebra billy, 14cm.
Half decent fire prep had a hot little fire going in no time and up went the billy with 3 balls of tin foil holding a small cake tin of the bottom and a ball of the dough. Then wait for the coals to form before starting on the skillet... 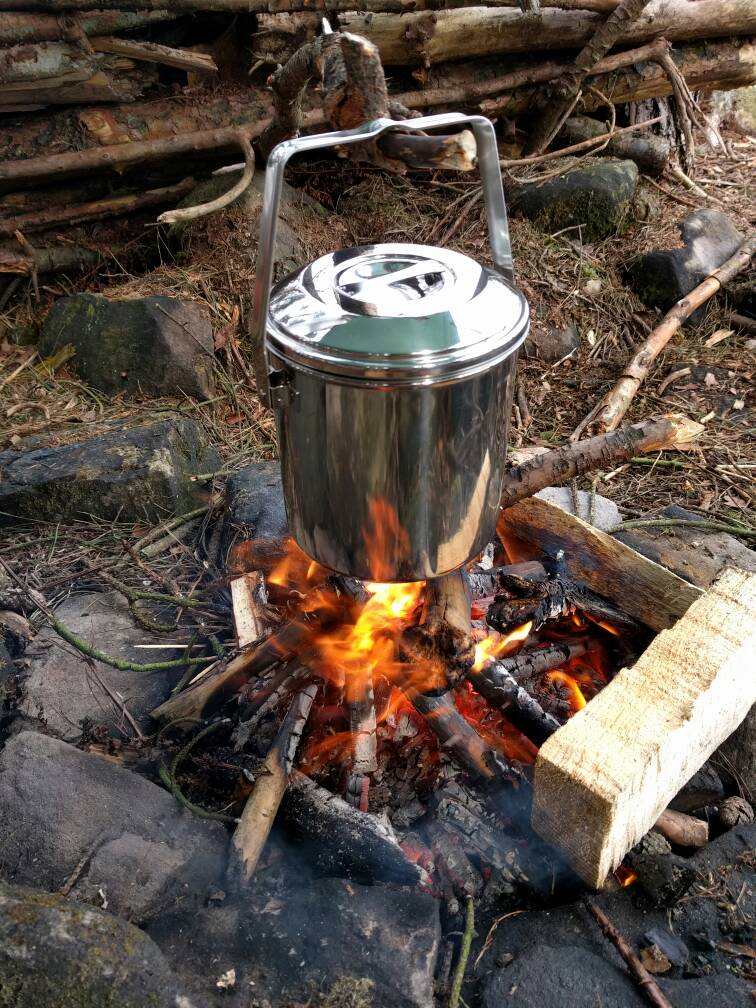 Once the coals we ready they were spread out a little and on went the rest of the dough in a flattened lump. The skillet was too hot, burned one side, nearly burned the other and I ended up splitting it thinner and cooking the inside that way... and the billy was too cool, so dropped it into the fire. 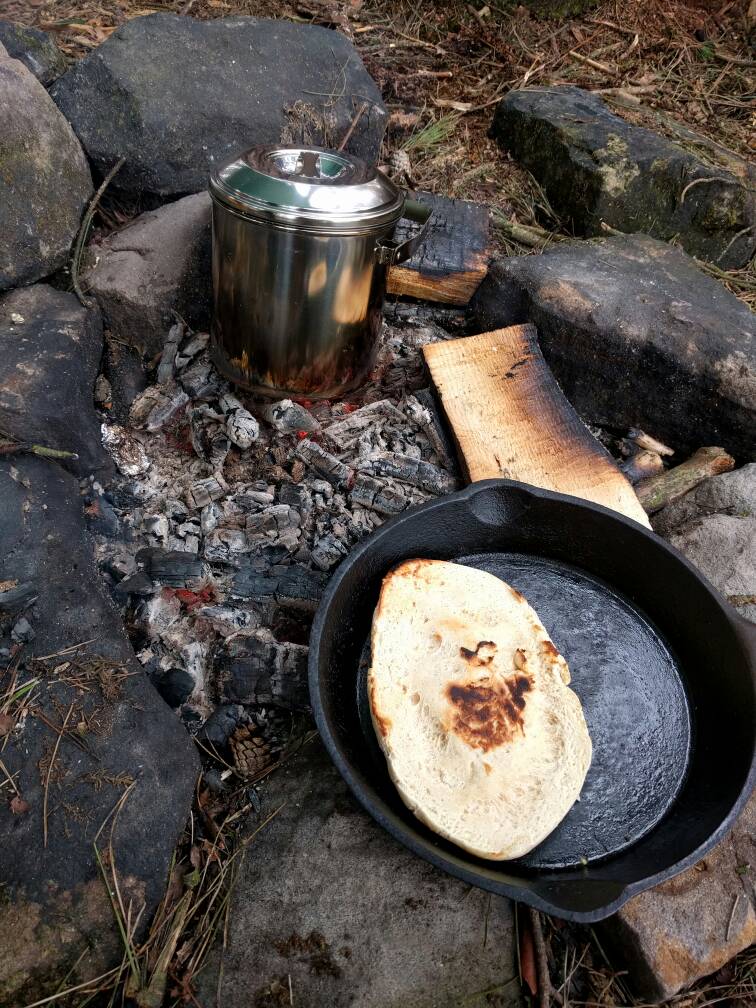 The skillet batch was quickly cooked and very edible so that was wolfed down. It was around then that the wind really picked up and I checked the little thermometer. 2°C... Maybe shorts were a touch optimistic, anyhow it was time for the second half of skillet style and time to check the billy...

It was only cooked, and soft, and generally lovely! Tricky to spread butter that has been at 2°C for a while but still, well worth it

All in all, something of a result. Thanks BCUK for the inspiration, general and specific.