Mobile charging without access to electricity - What are the options?

jaffcat said:
I have a deal with my wife.... I can go away with my young son as long as we can keep in contact.... odd text, occasion call.... my android lasts about 4 days when not really being used and in power save mode.... as a back up I carry a cheap tesco power pack ... about £8 I think.... that gives my a couple of charges so that will last me about a two weeks if I'm careful

Sent from my MotoG3 using Tapatalk
Click to expand...

C_Claycomb said:
Yeah, and we managed without electricity, the internal combustion engine, gunpowder and metal for quite some time too. If you cannot offer an answer to the question asked, why do you have to come in to be scornful of other people's worlds?

I can't believe I am playing advocate for the use of smart phones / cell phones, but since you are not able to imagine a world outside of your mountains where a smart phone might be of use I can provide a couple of examples from our world. Don't take this as too much of a slight, before I had such a phone I didn't think they were worth having either, and certainly didn't think that I would want to take one on a trip but I can now see there can be benefits. One may not need the phone while in the wilderness, but they are handy while navigating the civilized lands at either end of the trip. In all cases when I travel, my family feels better knowing when I have reached destinations safely.

1. Week long canoe expedition on Stora Le, Sweden. Made the trip three times. First time or so was with a dumb Nokia that held a charge forever. Used it after I was back in the UK at the end of the week to arrange pick up from airport. To navigate around Gothenburg on the way in and out of Sweden for those first trips I carried a bunch of A3 (that is a paper size approx twice Letter size) print outs. At the time I thought that this was a huge PITA but better than being clueless about what was where, or depending on finding a suitable map while there. On the final trip it was very convenient to have a smart phone which not only showed maps, but store locations, opening times and information about the buses and trains, as well as being able to coordinate with some of the group who were there already.

2. Two weeks driving around New Zealand's South Island. News Flash...New Zealand has mountains. Phone didn't work, but GPS did fine when I wanted a position check. More importantly, I was able to carry a bunch of high detail maps for places I might be passing through. I prefer paper, but the number of maps needed to cover my possible route around the country with 1:50,000 topos was prohibitive. The phone was good for communication when I passed through small towns that had signal, and for finding camp sites via pre-downloaded data. Didn't need to worry about charging though since I had a vehicle, but I can see how a few day's tramping might have stretched that. I had a separate camera with spare batteries, but a lot of people use their phones now.
Click to expand...

Even in the mountains you should be able to get a GPS signal; just climb until you do. Regarding the phone bit though, I don't get a signal in the woods even here in flat Florida (I've said before, if you get a signal, you ain't far enough away from civilization) I can partly understand people wanting to let family know they arrived safely, but I refuse to submit to a leash. For those that want or need a smart phone (or even an older dumb cell phone) there appears to be a fair few good options to power them already and I expect battery technology to improve still more. I also expect more and more folks are gonna want to take them just for the sake of taking them. If we base everything on "need" alone then we wouldn't be going into the woods or the mountains anyway; we go for fun. With that in mind, if your phone and the associated apps and devices are "fun" for you why wouldn't you take them?
Last edited: Jul 20, 2016
B

Thanks for the ideas guys. Some good suggestions for power banks, and solar rechargeable ones too, and I must admit that the Biolite stove looks very intriguing as well..

I have the GoalZero Nomad 7 charger and a decent sized powerbank. Charge the powerbank when I can -- the goalzero stuff is actually somewhat water-resistant -- and then charge camera (important!) and phone (unfortunately sometimes needed) from that, generally at night in a tent or even inside a dry bag under a tarp.


Why phone? I agree that keeping it running on a normal wilderness trip is generally unnecessary, but when running a course I need it to work (we've had people desperate try to reach course participants due to medial emergencies in the family).

For emergency use I carry a PLB, a real one and not the Spot, but sometimes it can be useful to be able to communicate non-emergency information to others: e.g. if you need to stay out a bit longer due to bad weather forcing changing plans.
Last edited: Jul 29, 2016

NS40 said:
I carry a EC Powerbank which will give my smartphone up to a dozen full charges or my tablet about 7 or so times. I find it ideal as I don't drive so spend a lot of time on public transport but have my own phone, a work phone and a tablet with me most places I go and all are in pretty much constant use. 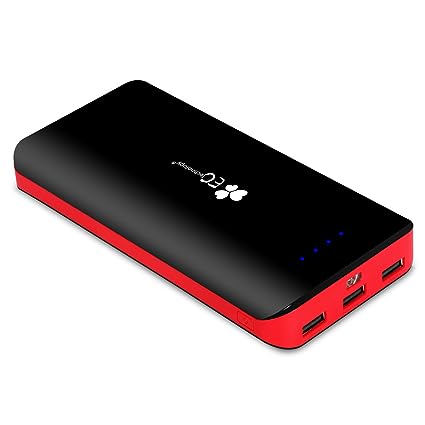 I also use a Biolite stove for camping either to directly charge my phone or to top up my powerbank. It'll run on wood or pinecones but a small handfull of wood pellet cat litter goes a long way too. This is me charging up during a brew up on holiday last week.

Just wanted to thank you for the tip on this EC Powerbank.

I spoke to a mate with a Power Monkey (which I had been set on) and his opinion was the Solar Panel is fluff and takes way too long to use in practice.

I'm really impressed with how fast it charges my iPhone. More like mains than USB speed.

I have a 1amp 5volt solar panel, but with our sun it struggles to charge my smart phone, it does charge a batt pack fine. Banggood have a range of solar panels which could be combined with a battery pack
N

Countryman said:
Just wanted to thank you for the tip on this EC Powerbank.

I spoke to a mate with a Power Monkey (which I had been set on) and his opinion was the Solar Panel is fluff and takes way too long to use in practice.

I'm really impressed with how fast it charges my iPhone. More like mains than USB speed.

Glad you like it. I use mine every day and have had it at least a couple of years now. Tops up my two phones, tablet, bluetooth headphones, vaping device...everything really.

If I remember correctly it was a post on here that directed it to me in the first place. I wish you many happy connected hours with it!

I use a Solargorilla in conjunction with a Powergorilla. Works well but not really an everyday backpack item:

santaman2000 said:
Don't want to hijack the thread so lets not get too deep into this question; does public transport there (I'm presuming buses and British Rail mostly) have charging stations for passengers use? Both Amtrak and Greyhound (our rail and long distance bus lines) here provide on board household power outlets at the passenger seats.
Click to expand...

mrcharly said:
Commonly, yes they do.
Click to expand...

Not round here they dont. Never seen one on a bus and only power outlets on a few rare trains so you would need to carry a charger too

The newer buses around our way have them, and the company also operate in other areas of the uk.