I have been trying to get a Fox skull for a while now, and this is my third attempt, both previous ones were either in bed or scavenged and I lost them. Probably because they were in a forest a walk away from my house so I couldn’t check them regularly.
However, one for hit by a car near my house, and crawled onto the ditch alongside my boundary where I park my car, so this time i weighted the body down with old tyres and made sure the head was covered so it couldn’t be robbed. I then left it for a year, until it was just bones.

I then collected the skull, cleaned it with soap and water and then soaked it in a biological detergent and water mix for about 6 months to get the dried skin and grease out of the bones. Then they had about 12 hours in a 6% hydrogen peroxide solution. Before air drying them for a couple of days. I then glued the teeth back in and reassembled the skull. 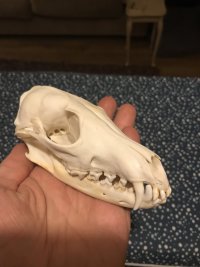 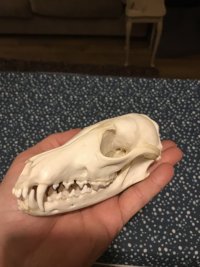 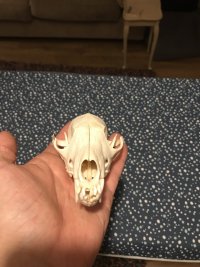 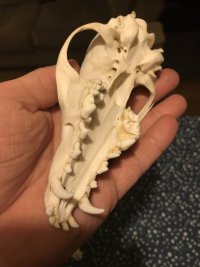 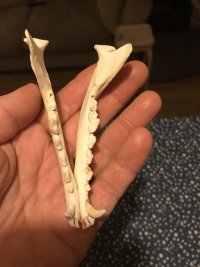 I was quite pleased with how it came out abs it got me thinking if I could rearticulate the rest of the skeleton, so I went and collected as many of the rest of the bones as I could fine. I hope I got them all (but probably not!)

this time they didn’t need the soak in water as they had been out in the open air for an extra 6 months are were completely clean and dry, so I just bleached them with hydrogen peroxide.

all the key components appeared to be there (some not pictured) so I then started to assemble the spine. Took a bit of fiddling but the bits either feel ‘right’ and that they should fit together or they don’t. Sacrum is at the top and neck at the bottom of the below immage 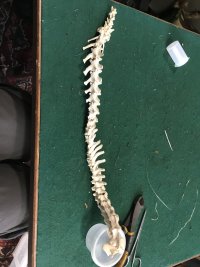 that’s as far as I have got for now, I am sure the small feet bones are going to be quite the challenge…..
This may take me a while…..
Reactions: PoppyD, FerlasDave and Dogoak

The feet bones ate THE challenge. And that’s putting it mildly.
Reactions: PoppyD and MrEd

JonathanD said:
The feet bones ate THE challenge. And that’s putting it mildly.
Click to expand...

I have some milliput white putty I can use to ‘make’ any that are missing I think. It will be a huge challenge, that I am in no doubt!
Reactions: PoppyD and FerlasDave

That’s really cool. You could always manipulate it into some sort of pose if you need to hide any missing parts too.
Reactions: PoppyD and MrEd

Did a bit more on this today, properly wired the spine.

I drilled holes in the articulation surfaces and fed 0.8mm brass wire through them all, with a dab of glue gun glue between each one. Means it can be articulated a bit.
I have all the vertebrae but I am sure I am missing a few tail bones.

I also laid out and paired up the ribs. I have all the ribs and all the sternum bones except the small ziphysternum ‘nub’ on the end.

I then went through the leg bones, and I have all of those.

I have some of the hyoid bones.
I am not sure on the feet but I am certain I am missing some!

also an unidentified bone I have worked out aswell, it’s the penis bone so this was a male Fox.

Ribs - no idea if they are in the right order yet 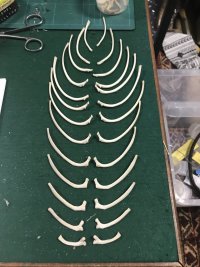 Pelvis in the right place 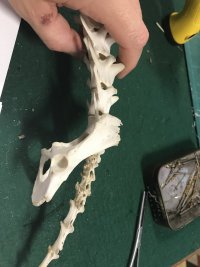 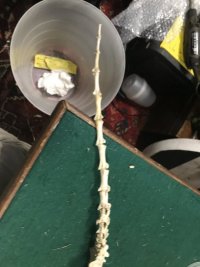 Adding the bones to the wire 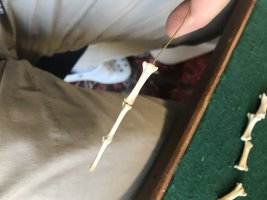 Through the holes I drilled 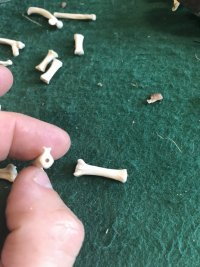 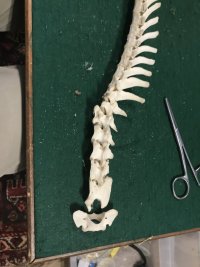 Cool. This is great.

The baculum confused me too 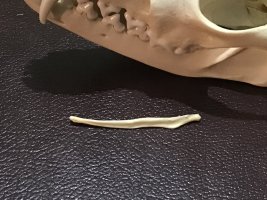 JonathanD said:
Cool. This is great.

The baculum confused me too

dont get your hopes up, this is the first time I have attempted anything like this!
Reactions: PoppyD and FerlasDave

Well that wasn’t as hard as I thought, wasn’t easy but wasn’t difficult - just a fair bit of trial and error but i have the foot bones organised into where they belong, and one foot almost assembled. I assembled the rear left foot and glued it together temporarily with a hot melt glue gun, once I have figured out the pose I will pick the glue gun glue off and reassemble the foot using milliput resin putty (maybe!)


Laying out the rear foot bones, its fascinating how they all work together to give an enormous range of movement in multiple directions, at the same time. 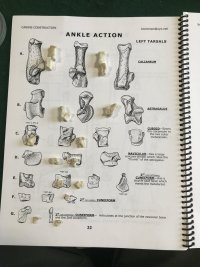 laying out the front foot bones 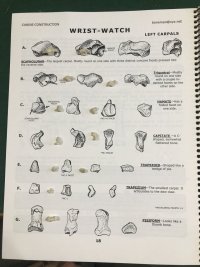 assembled the rear foot and the metatarsals the toes 'hang off' - i will wire the toes so they can be posed. 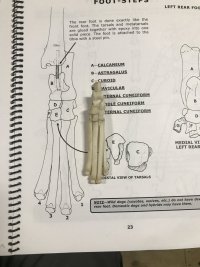 laying out the toes, the bones fit after i tried them all but interestingly the claws are all the same, and all the claws seem to fit all the distal phalanges in any combination. So not sure what to do about that, pribably jsut guess based on size to be honest. 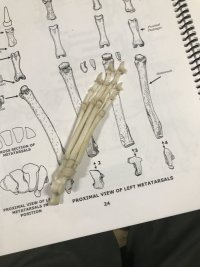 The foot glued together, look at how complicated and delicate that ankle and foot joint is! 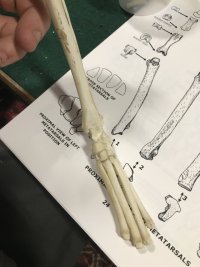 Damn. I need that book. What is it?
Reactions: wookii and PoppyD

JonathanD said:
Damn. I need that book. What is it?
Click to expand...

blooming expensive so dont tell my wife, but its part of this series here

this is the cheapest place i found it, the spiral bound ones are £75 on amazon, and the hard backs even more!!

Written by a thirty-year veteran of professional skeleton building, the Bone Building Books is a series of manuals (each one dedicated to a different group of animals) explaining how to clean, prepare, and articulate the skeleton of that animal in a simple step-by-step manner. Each manual...
www.nhbs.com

i brought volume 8, but i can see me eventually getting volume 5 and 9 aswell.

and this is his actual website, a guy in the US

Ah cool. I have an account with them for my ophio needs.
Reactions: PoppyD and MrEd

MrEd said:
blooming expensive so dont tell my wife, but its part of this series here

this is the cheapest place i found it, the spiral bound ones are £75 on amazon, and the hard backs even more!!

Written by a thirty-year veteran of professional skeleton building, the Bone Building Books is a series of manuals (each one dedicated to a different group of animals) explaining how to clean, prepare, and articulate the skeleton of that animal in a simple step-by-step manner. Each manual...
www.nhbs.com

i brought volume 8, but i can see me eventually getting volume 5 and 9 aswell.

and this is his actual website, a guy in the US

I bought the entire national vegetation classification of the UK volumes....at £100 odd each paper back for my needs, so can see the pain here, for my sins realising that they could not be trusted, I had to re model all of the vegetation floristics from the start....not a happy chap.
Reactions: MrEd

Today’s efforts. Filled in some gaps where I have some bones missing, repaired the broken neck of femur and Built up the other foot….. and made a mistake. It’s to late to rectify though

I have made the left foot slightly inwardly rotated rather than parallel with the floor, hopefully when I pose it I can have it gripping a rock or something so it isn’t as apparent….

How it should be… 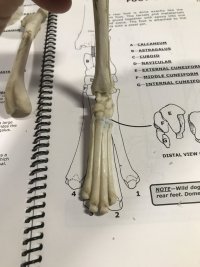 And how I have glued it together 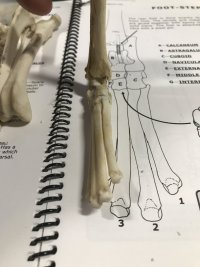 I rebuilt the broken neck of femur aswell, using resin putty. It isn’t a perfect rebuild but that’s deliberate so it can be seen it’s beoken 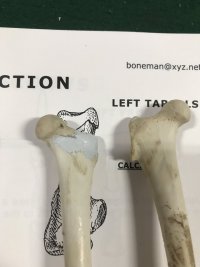 and the overview of what I did, rear legs are almost done pending attaching the toes. 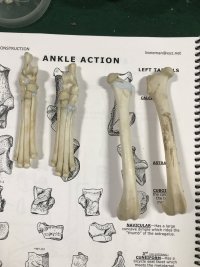 Bit Annoyed about the ankle but been thinking about it and I might suspend it in a frame, hanging from string then it won’t be apparent!

This is great, They should do air fix kits like this. Very well done so far!

What scale was it? Haha. They should do animals, something like a fox could be 1:1 scale that way.
You must log in or register to reply here.

Foxes and Rats and Neighbours oh my!

P
What did the fox say?

Anyone use Rose Noble ?