last weekend I picked up another old wooden slide box for a quid in the retro/antique shop in Ramsbottom. I've already got two that i have restored after gutting to hold art supplies as they are a handy size and always dirt cheap. this one was slightly older than the other two having wooden rather than plastic slide holders and once they were out just needed a light sand and a couple of thin coats of satin yacht varnish.

A couple of years back I picked up a Webley Mk VI .177 air pistol and I was still storing it in the cardboard box it came in. I'd looked at original boxes for the real .455 pistol but since they are now collectors items and well over a hundred quid a pop decided to do like a friend did and cobble together one myself, What hed done is picked up a old cap firing flint lock pistol on a flea market and used a old, pre 1960s, cutlery box to make a display case for it as a present for his son. He did a rather good job of it and so Id been vaguely looking for a similar box myself. however none turned up and since this slide box ws deep enough I thought Id use it. 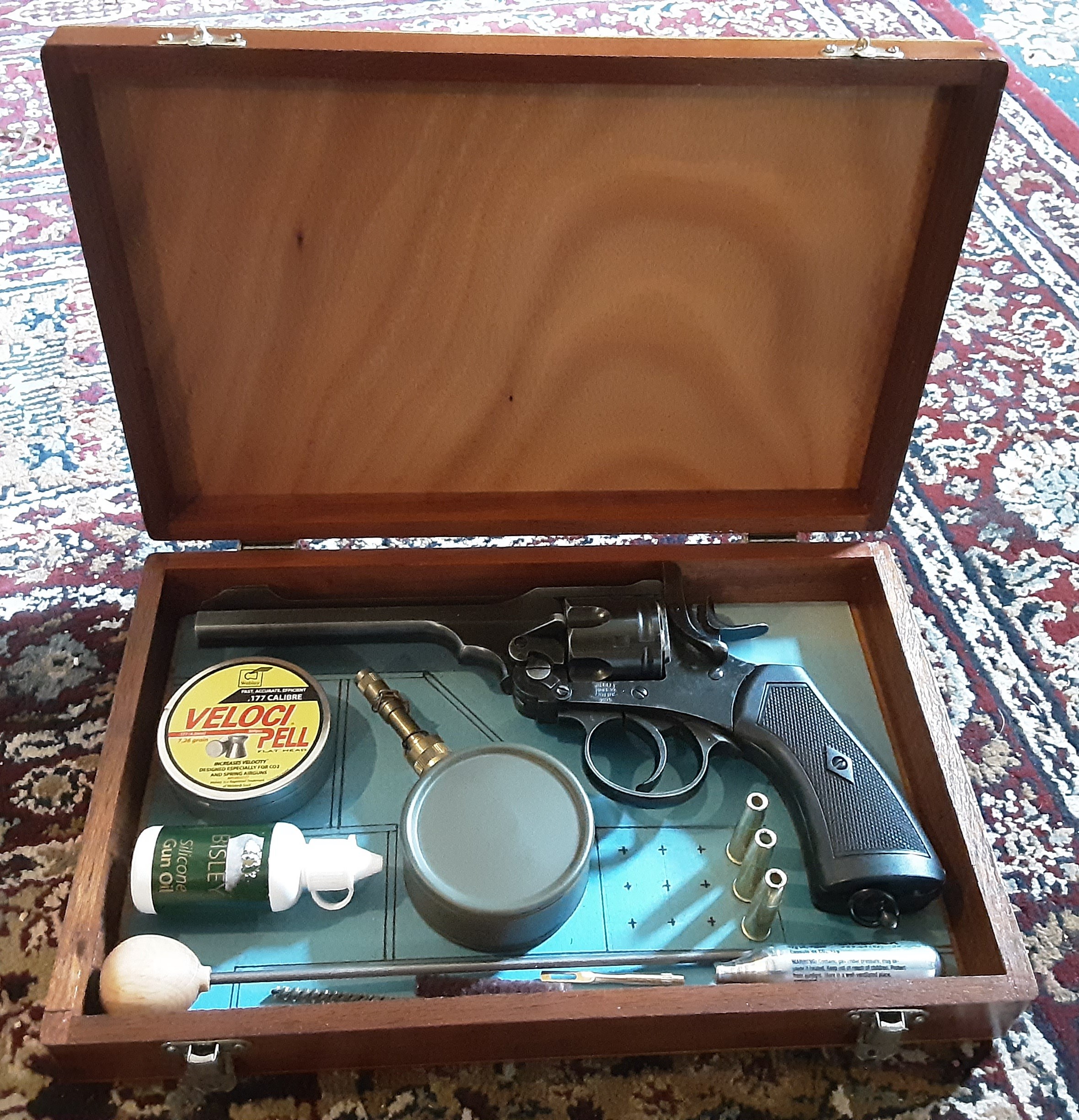 I've worked out where the deviders need to go and the size of the wooden block to take the pellet holders/ fake bullets. They will be easy enough to whip off on the band saw. However I've hit a wall with regards to the wool rich green baize I want to line it with. I just need a couple of square foot of it at most and new it it is both prohibitively expensive and only available in 1.5 by 1 metre lengths or multiples there of. A few place sell off cuts but only of the high end stuff and it worked out that even if i bought just enough for this job it would be 20 quid! Back as a student I acquired a big piece of baize from when they were recovering a pool table but over the intervening 30+ years that's been used and shared with others until there's only some small scraps left.

So does any one have some wool rich green baize I can beg, buy or swap? or know of a cheap source? the stuff with lots of synthetics in has not responded
well to getting oil on it.

The biggest bits I need is to cover the top and botton inside which are 19cm x 31cm in new money.

Would a piece of velour blanket work?
I've seen them used to align jewelry boxes made by inmates using matchstick for construction.
Jon

How about buying an old card table and using the baize felt from that. There's quite a few on ebay for low prices
Reactions: plastic-ninja and zornt

Cheers! I'm not familiar with velour so I'll have a look at some next time I'm shopping. Its cotton or synthetic based stuff and it may fray more than my skill level can handle for this project.

Yup its the sort of baize thats on card tables is the right stuff but I suspecting is well glued down and the postage may be prohibitive if . Il, keep a eye out in the junk and charity shops. I considered those kids pool tables but I'm pretty sure they use cheap synthetic baize glued to MDF.

One thing occurs to me is about 3 or 4 years back i bought a really nice refurbished Riley six foot pool table, a proper thick slate bed job with new baize and rubbers or what ever they are called. If they are still going and I can recall the name or track them down ill seeing i can buy off cuts or scrapped material off them.

i have some from when i restored an old ww2 army teleohone that was green baize lined, i have some off cuts. Will get it out and take a photo tomorrow and if you want some its yours,

Back before I got rid i had 3 field telephones, a J, a F mk II and a yank one. I once accidentally did the Bell Tellephone hour on my mother but that's another story.

Baize arrived and there's plenty for this job. Thanks Ed! I'll post pics when it's done.

tombear said:
Baize arrived and there's plenty for this job. Thanks Ed! I'll post pics when it's done.

was the postage alright? i blagged it with a prepaid envelope and wasnt sure if it would be enough or not!
Reactions: tombear 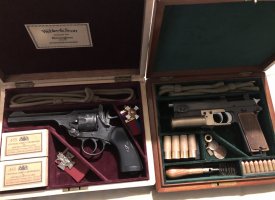 Something similar was made from old cutlery boxes for the new Kingsman prequel.
Reactions: plastic-ninja

MrEd said:
was the postage alright? i blagged it with a prepaid envelope and wasnt sure if it would be enough or not!
Click to expand...

It came through no problem, thanks! I now need to find the lime/ basswood strips I'll be using for the dividers, hopefully its in the same drawer as the balsa for my silly retro flying models. I was going to band saw strips from some scrap Oak but I snapped the blade cutting some MSF, oops.

Aye, there's a guy sells those converted boxes on ebay from time to time but the last ones I saw were £75 a pop and they don't hold all the gubbins i want to carry with it. Mind, he does a lovely job.

You can get wooden grips for the CO2 pistol but they are really dear, the plastic ones that come with it are the only naff, part well that and the weak spring on the stirrup that holds the gun closed. Unfortunately its not a dead copy of the original or I would get a mate in the US to sort me one. With regards to the grips if I see any cheap originals I may get them and dremel out the back, add clips to match the new ones. The stirrups nota big issue as it only realy catches on webbing holsters ad you put the gun in and the leather job I have keeps it shape so you pretty much have to try to mess up.

I’ve converted a set of Webley grips to fit one of mine. It’s quite easy to do with a bit of patience. I’m not going to do it to the one above as it’s screen used by Fiennes and has been heavily modified already. It’s still got the mud in the grip from the trench scenes.
Reactions: CLEM

Cool! It's a shame the safety catch on the CO2 version is so obvious. I regret not getting a old spec deac' before they changed the law and started welding the steel ring into the already chopped cylinder so you can't fit inert rounds. I'd have kept that one.

Finely got the baswood/ lime i wanted for the dividers and a 1/4 × 2 x 24 inch piece to have a go at making a strop as I keep seeing reference to how good they are. I was forced to use Hobby World and got reamed as all the good local model shops have shut or moved completely online just selling RC kit.

have you not thought about making a one piece insert with all the shapes routed out, so everything sits snug into it's place, therefore making sure nothing moves when carried, would not be hard to do. The insert sitting on a bottom layer of green baize, and the insert coloured to match the box itself. Would look quite well.

Yeah I thought about it, well. using the electric fret saw rather than a router, but I prefer the aesthetic of the original boxes and I wanted to allow for the option of some variation in contents over rime.

Just got to snatch some me time to cut out the parts and cover them and get them glued and pinned in. I wonder where I a get a facsimile of the paper ,abel?

DIY firerod on a watchband.

Giving myself 3months to find a vintage equivalent or I'm buying a GB axe!