A day in the Dublin hills

My first time away in the hills by myself this year. I had decided to leave early and in order to try out a new bag (nothing fancy, a cheap outlet purchase) I loaded it up with bits and bobs.

Dublin is fortunate to have a long mountain range on its southern broader with County Wicklow and most of it is state owned and therefore open to the public. However, it's also mostly under commercial forestry and this does not lend itself to open woodland with teaming wildlife. You are also competing with the outdoor activity of the citizens of capital city, so dog walkers, hikers and mountain bikers are never far (enough) away.

But after spending a good deal of time pouring over maps and google earth and the Ordnance Survey Ireland site (http://maps.osi.ie/publicviewer/#V1,591271,743300,0,10) I found a likely looking spot and decided to head off to have a closer look at it.

With the car parked up safely (and hoping it would remain that way), I climbed up out of the valley into the hills.

(All photos taken with a Samsung S4 mobile phone, so very much amateur) 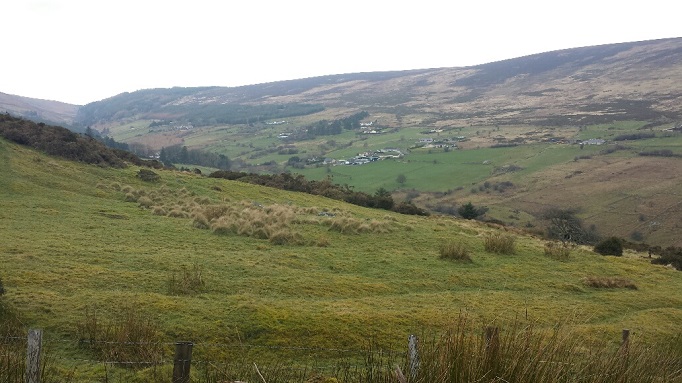 As I walked up the winding road, something caught my eye ahead of me that looked a little out of place. 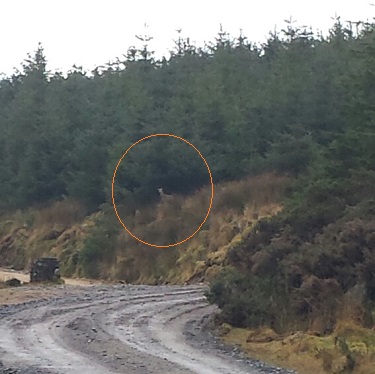 With no natural predators, the deer population is quite widespread so if you're quiet and have your wits about you, you can see them in all sorts of interesting places. 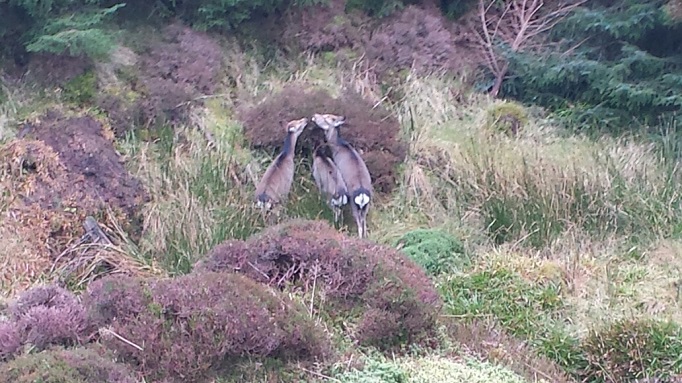 These three stood there eating for quite a while before they spotted me and dashed back into the cover of the woods.

Last year we had a population explosion of ladybirds, this year it's the turn of the frogs to be everywhere 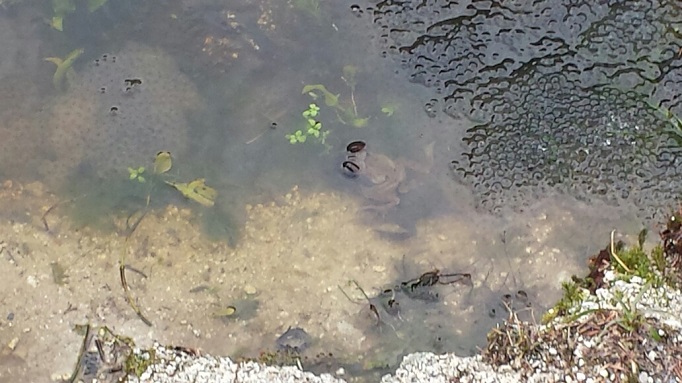 Every puddle and slow stream was teaming with them. 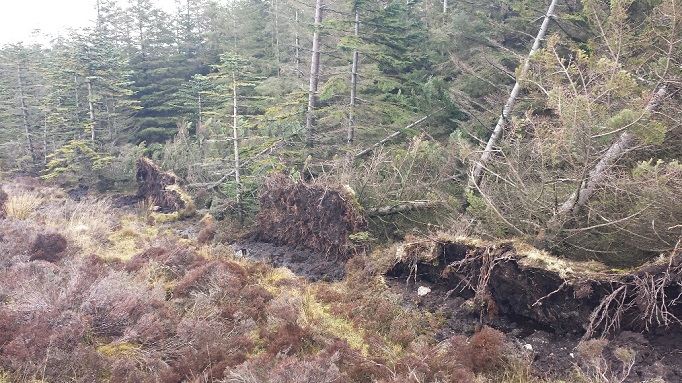 I climbed up until I reached the tree-line and here there was plenty of evidence of the destructive power of the recent storms. 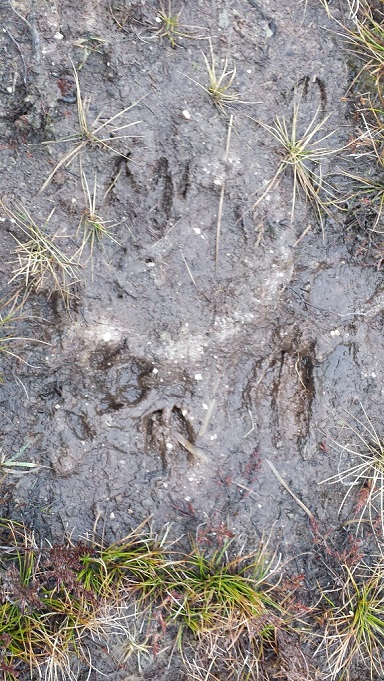 Plenty of evidence of that deer population too. 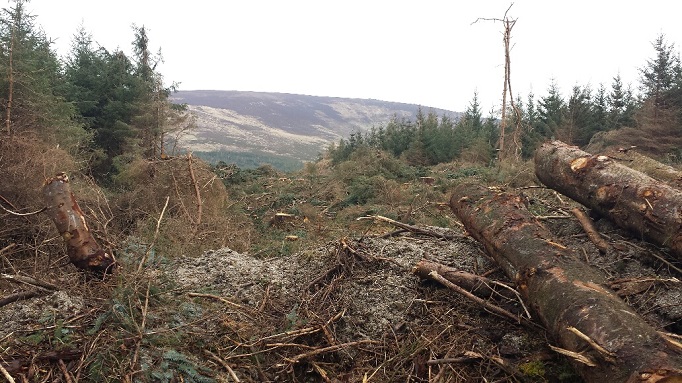 As I neared the area I was interested in, the signs of recent activity came into view. Entire blocks of forest had been felled and the land laid bare. I understand the commercial aspect to it, but it's pretty uncompromising all the same. It's either tightly packed rows of trees, or a barren site resembling a war zone.

So after searching on the periphery of the forest land, I found a sight that had little commercial value and was sufficiently off the beaten track not to be disturbed. 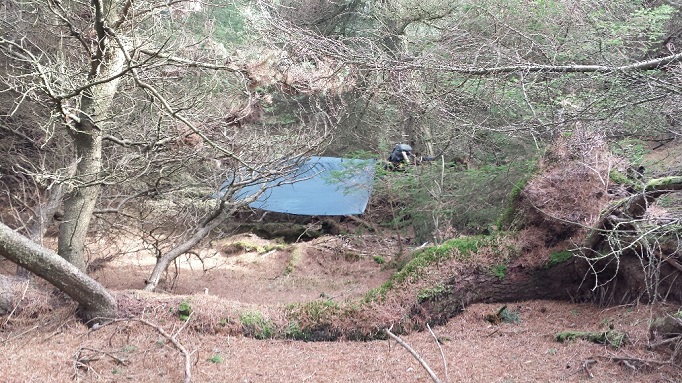 Even though I wasn't overnighting, I set up the tarp and hammock to enjoy the experience of being outdoors for the day and to practice my very rusty skills.

As I don't do this often enough, I have a pragmatic approach and don't commit too many beer tokens to my gear, so my humble hobo stove allows me to cook over an open fire without using up much wood or having to rely on gas/meths etc. 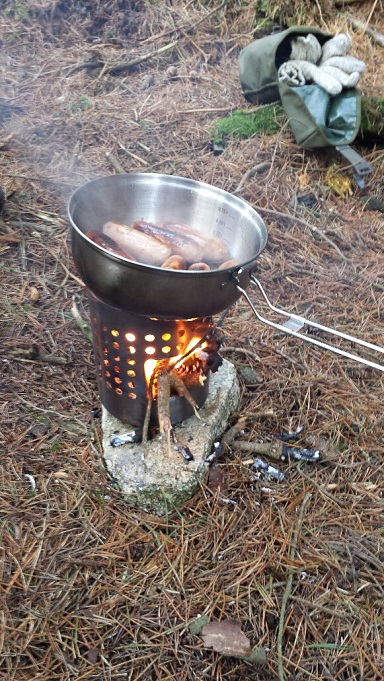 There was plenty of heat left over to warm up some soup too. 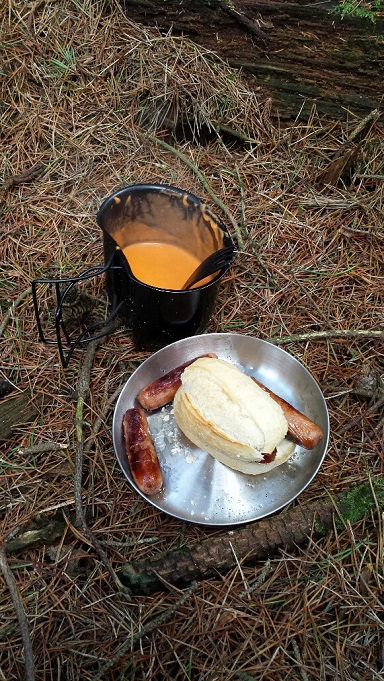 After lunch I explored my surroundings to see the lay of the land. Despite being extremely soggy underfoot, it seems like a good area and one worth returning to when the summer comes and dries up the soaked ground. 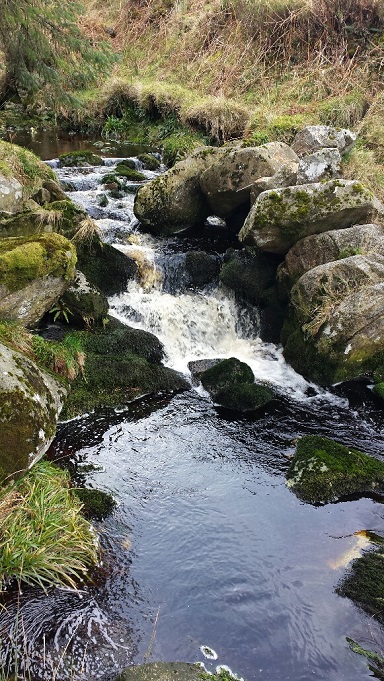 So that's another location ticked off the list. Thankfully quite a promising spot, but I'm already back at the map looking for my next possibilities...

Beautiful really, it is

When I was a young teenager my older brother had an Irish girlfriend, and she and her family invited me to visit. Their family came from the very southern coast, but she worked in Dublin, and she took me for a horse riding afternoon through lanes and forest walks near the city.
Lovely memories of lovely people, and a beautiful bit of the world

The area you found does indeed look like a good place to chill out and it will be so alive in Summer. We have to watch for midgies and ticks now

are they a problem there ?

Thank you for the photos, and sharing and yes, the hobo stoves are good kit.

Stunning pics, thanks for sharing

Nice one I enjoyed that wee wander and a spot of lunch. Yeah the ground in some places is terribly wet and will take while to dry out
Thanks

And that's why I'm trying to move to Ireland.

Toddy said:
The area you found does indeed look like a good place to chill out and it will be so alive in Summer. We have to watch for midgies and ticks now

Midges, not as bad as Scotland thankfully. Ticks, yes they are something to take the usual sensible precautions over.

Thanks all for the comments and support

Nice write up, thanks for taking the time.

Virtually anywhere you go, if you just sit tight and don't make a racket you'll see something of interest.

Very nice. The deer always seem to know when the hunting season ends and it's safe to be seen more often!

I went for a bit of a hike myself up and around the Sugar Loaf yesterday. Can't wait to get an overnight in soon!

Great pics and report, looks like you found a lovely spot.

Lovely. If I'm not mistaken, we don't get too many Irish trip reports...

Excellent
You must log in or register to reply here.

Out and About Dec 28, 2020
Suffolkrafter
S
V
A nice cup of hot chocolate

Tracking in the Snow - picture heavy