How To…. Build a Finnish/Swedish Candle – Damp/Wet Wood – Part 2

While writing my posts on my Scandinavian Candle series I recollected a long log fire I was taught how to set up by my good friend Kevin Warrington of Natural Lore. I like to think of it as a candle, but horizontal instead of vertical. The set up is basically two logs (usually pine) laid horizontally with one on top of the other.

This post is a step-by-step recording of how I set up what I have discovered is called the Rakovalkea Gap Fire.

Back in 2007 I was on a bushcraft course with Kevin Warrington and he showed me how to set up a long log fire. This isn’t quite the Finnish Rakovalkea but the idea is basically the same. (I have since writing the original version of this post found out from Kevin that the type of fire in the picture below is known in Lapland as the Sámi nuorssjo and differs to the Rakovalkea in terms of the supports used and not having a channel in the bottom log grooved out of it.)
These fires are great when you’re sleeping outdoors in a lean-to shelter or under the tree canopy in very cold or arctic conditions. Recently I also came across an excellent post on making a large full length Rakovalkea Gap Fire by SKW Bushcraft (I used Google Chrome to translate the page).

Where it all began for me

While out in the woods recently I came across some dead standing birch logs that looked ideal for the fire (normally pine is used but I do not have access to any at the moment), and luckily there were some handy, biddable children around to help transport it home. 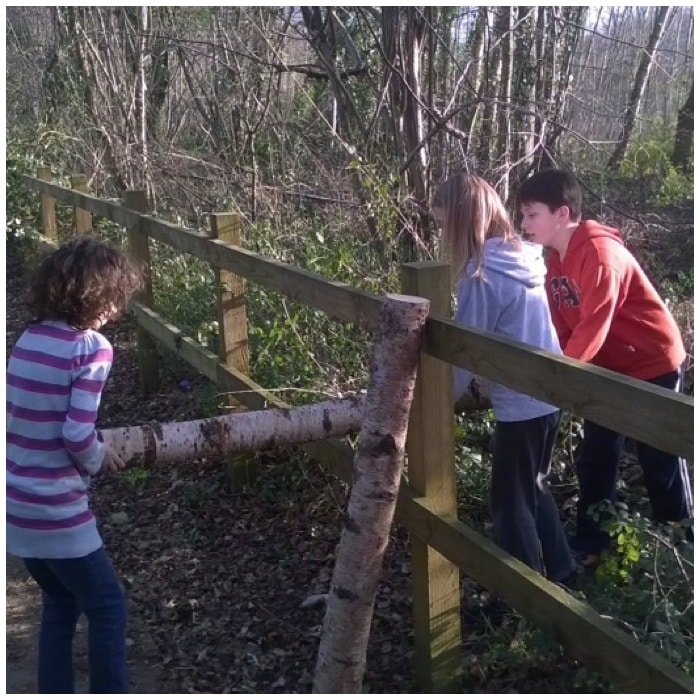 The component parts are two logs and various green sticks for supports and wedges. I flattened one of the logs in preparation for cutting out a groove in which to start the fire, keeping all the chippings for getting the fire going later. The log was not wet, exactly, but it was slightly damp owing to the heavy rain we have had recently. I could have left this experiment for the summer but thought that if I could get a damp log going then that would be a more realistic test for the UK environment. This type of fire is normally used in dry arctic environments where dead standing pines are abundant.

Component parts – Create a flat surface on one log 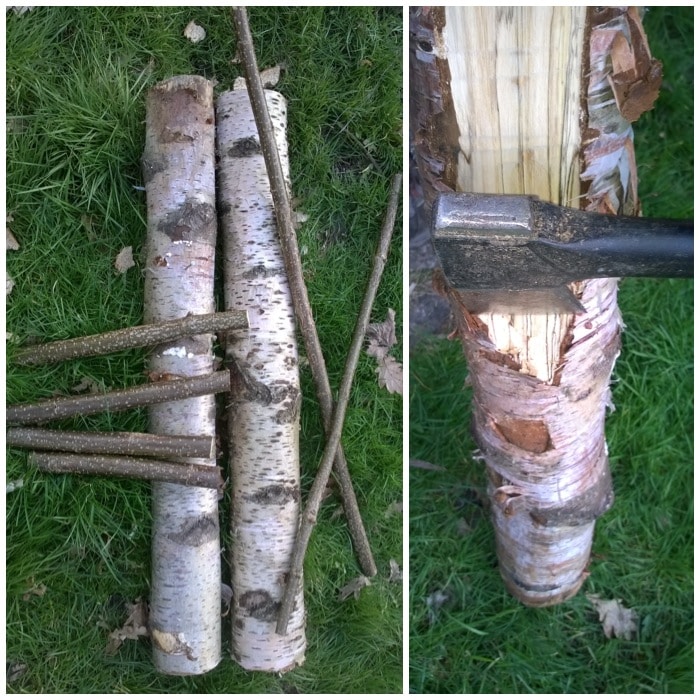 Once the log was flattened I carved out the channel. This is the dangerous bit, so cut the channel out with small cuts and with the log on the ground or well off to your side. I left flattened areas off to the sides but on reflection I think I should have made the channel the full length to maximize airflow.

Axe out a channel 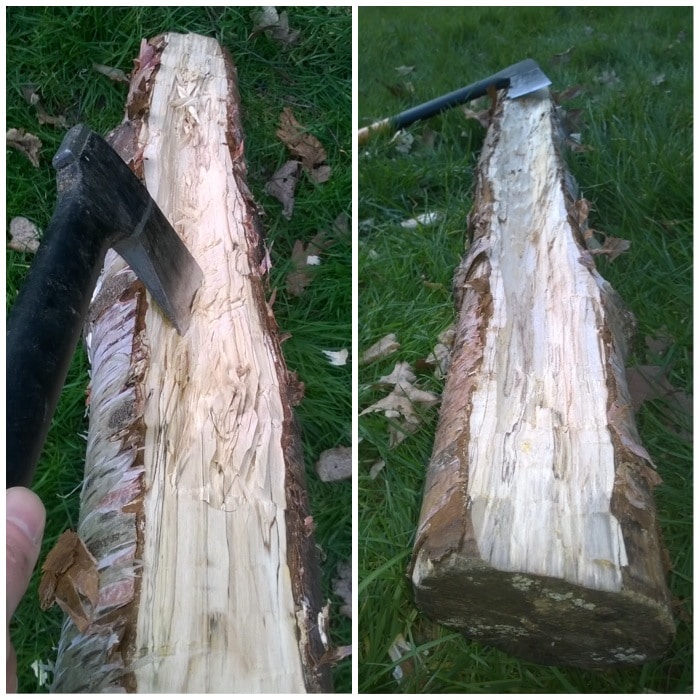 On the underside of the log with the channel I axed out two grooves for the support poles. 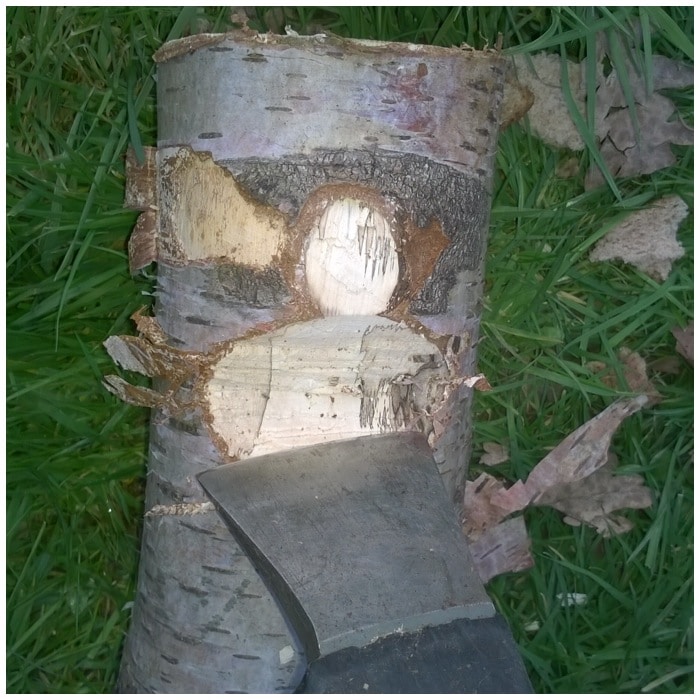 The support poles help to stop the log from rolling off to one side. I think if they were big enough they must help when the log is resting on snow to keep it secure. 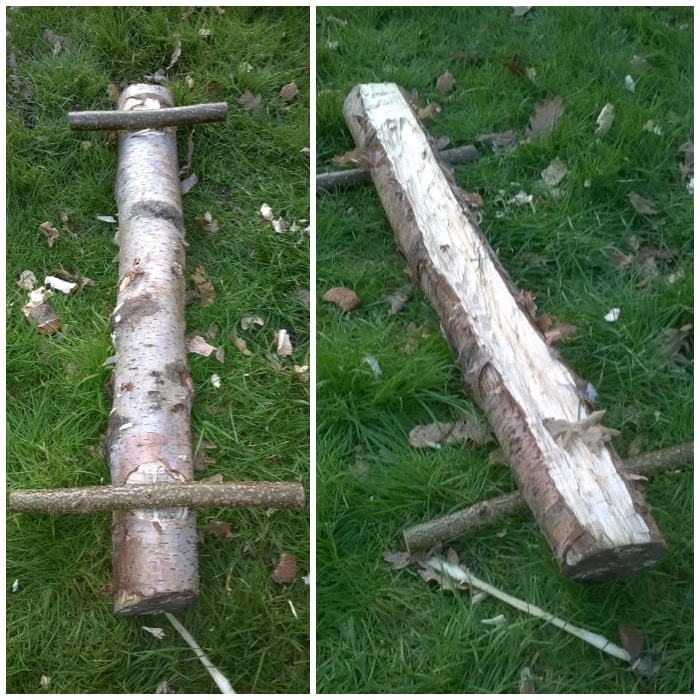 On the log that I was going to place on top I just flattened one side of it so it would rest securely on top of the bottom log. Again, on reflection, as the log was damp I should have made multiple cuts in this area with my axe to increase the surface area of the log and let the flames catch hold better. I came across this method when researching the Raappanan tuli candle.

Flatten out along a section of the top log 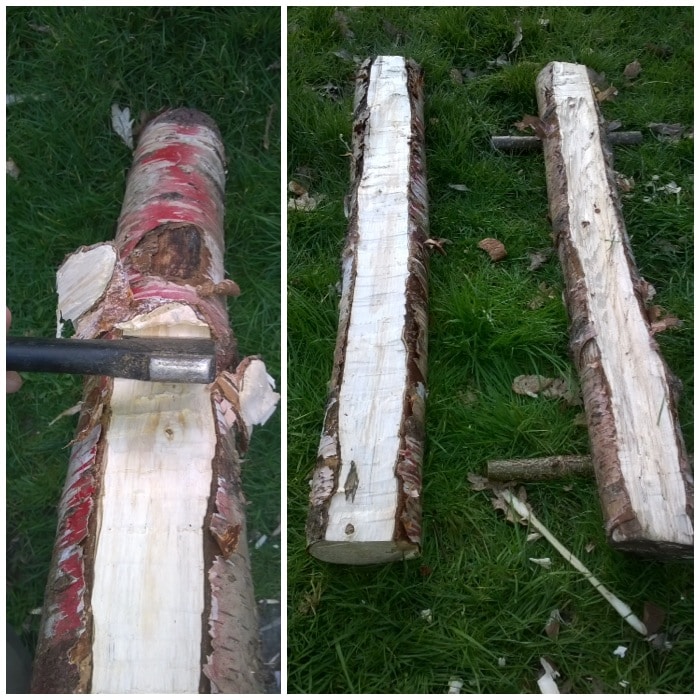 I carved two wedges that were to be used to vary the gap height between the two logs. These also proved useful as tongs later. 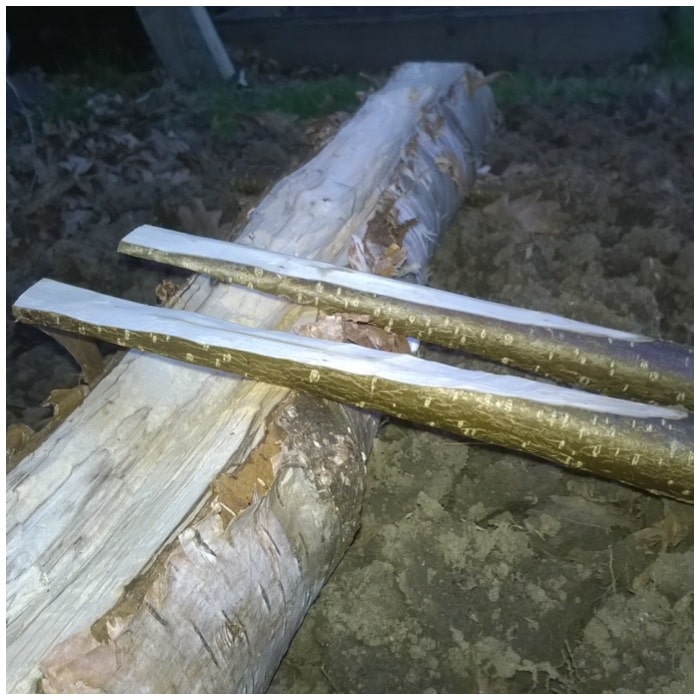 On one of the poles of green wood I carved a point and dug it into the ground beside the set up as support. I made this extra long as I was setting this up on soft earth (on the potato bed my wife had just dug over, in fact, but as it’s not been planted yet no potatoes were harmed in the making of this fire, and as I keep telling her ash is good for the soil).

One sharpened pole for support 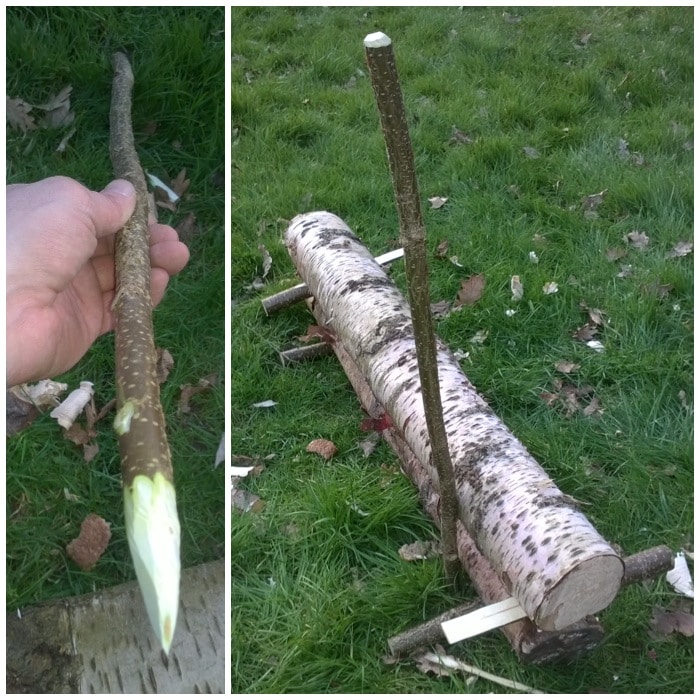 I slimmed down the end of another green stick and hammered a nail into it. One end of the stick is dug into the ground and nailed into the top log (diagonally opposite to the vertically upright green pole) 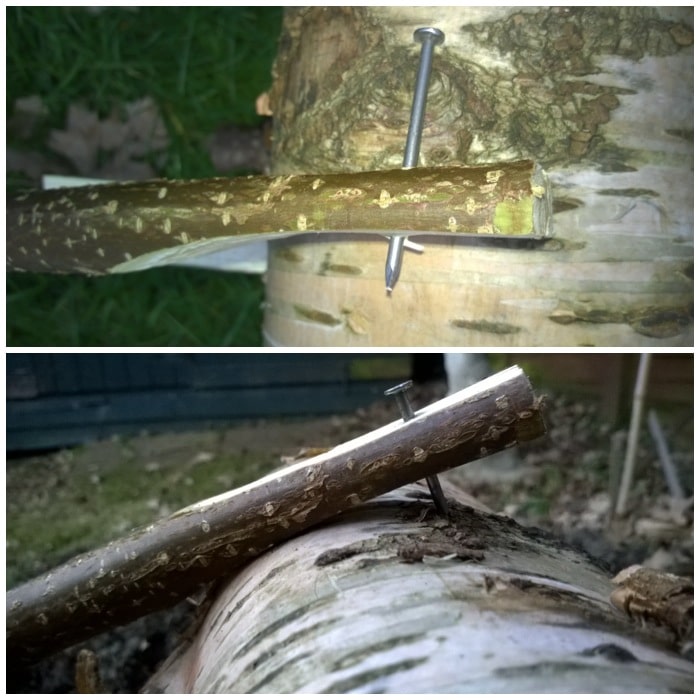 This is the basic set up without any tinders in the middle. All in all (not including foraging the wood) this set up took me about 15 minutes to do. I have read that with the much larger set ups (full body length) someone with good axe skills can set one up in an hour or so.

Basic set up without tinder 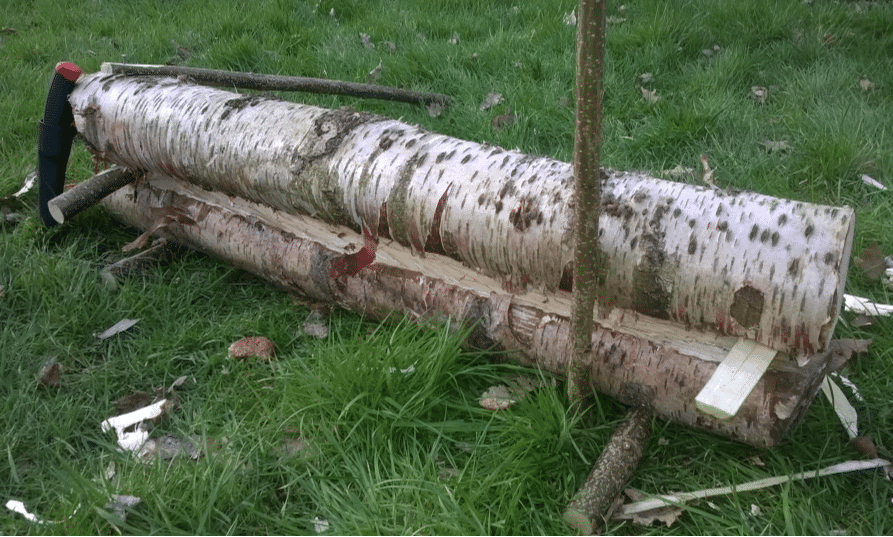 To get the fire going I used a mixture of waxed wood shavings, cotton wool balls smeared in Vaseline, and a lot of dry larch twigs. I did try and find some pine or spruce resin but to no avail. Resin is traditionally used along with pine fat wood. 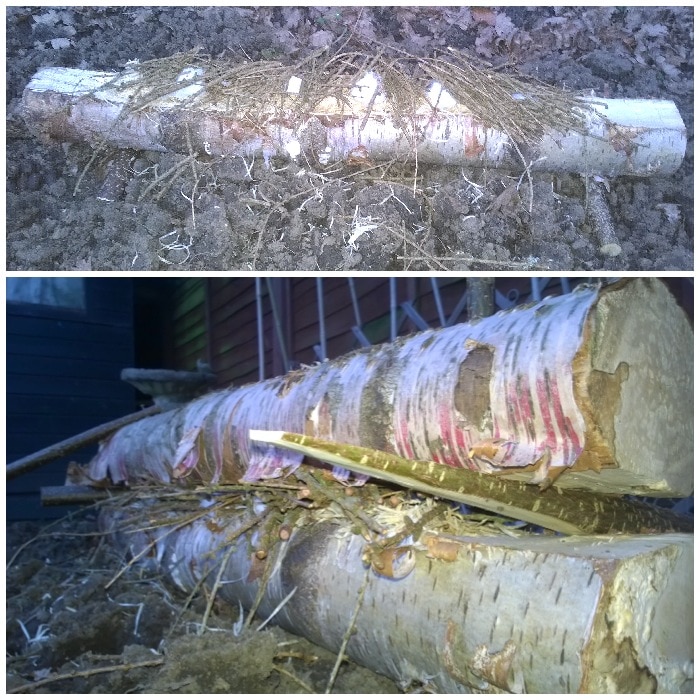 I lit the whole thing with just a couple of matches and in a few seconds the whole set up was alight. 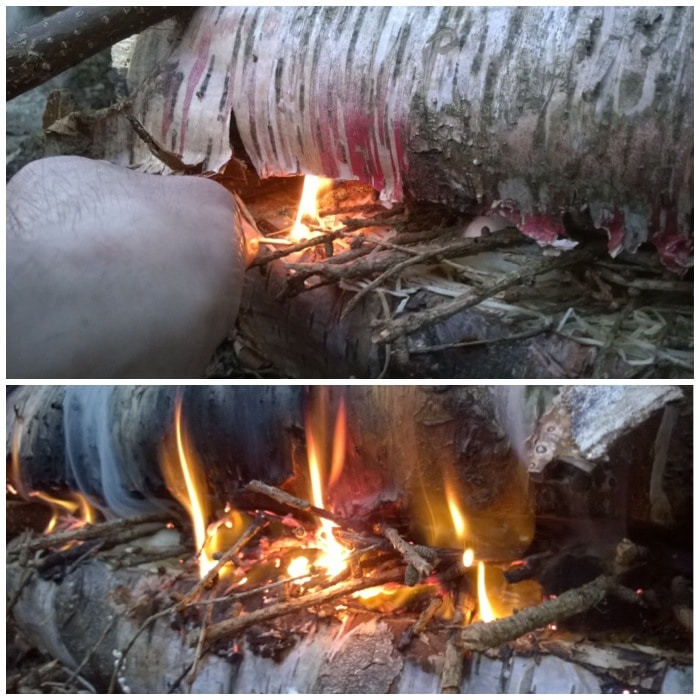 It was lovely to see the flames spread so quickly and on both sides. 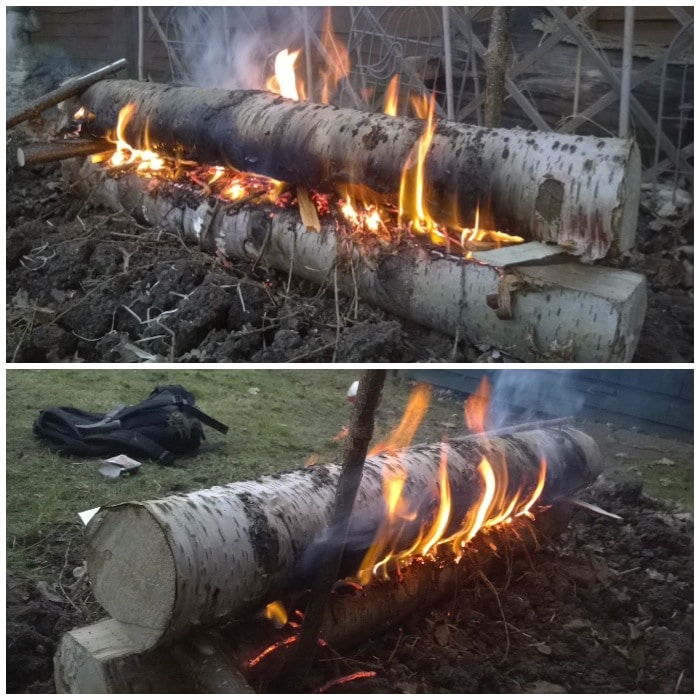 After about 5 minutes I started to add lots of pine kindling along the whole length. There was no wind so I had a small plastic plate to use as a wafter. The wooden wedges really came into their own as they allowed me to adjust the height of the gap so as to insert the kindling.

I tested the heat (with the back of my fingers) along the full length of the set up and it felt very uniform along its full length. 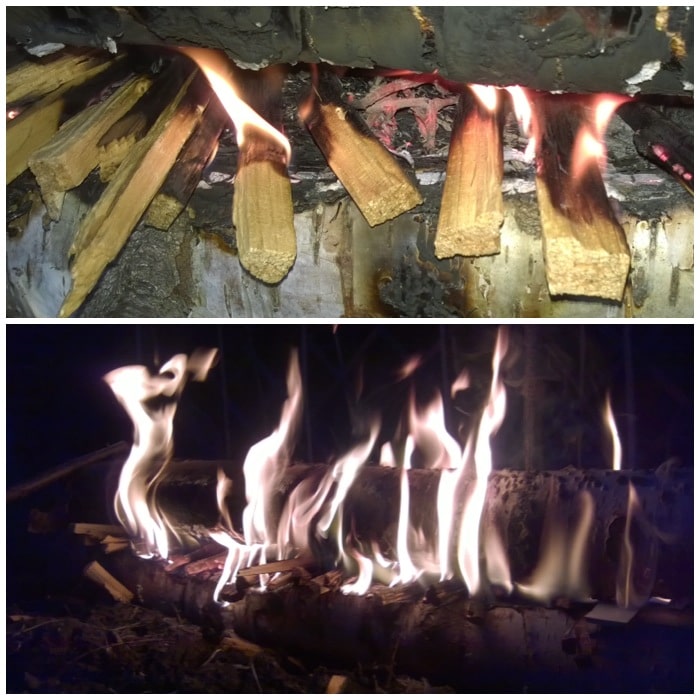 For the next hour I just kept giving the fire the occasional waft and added more and more kindling. I made a short video (the sound is quite poor I am afraid) of the fire at this stage – 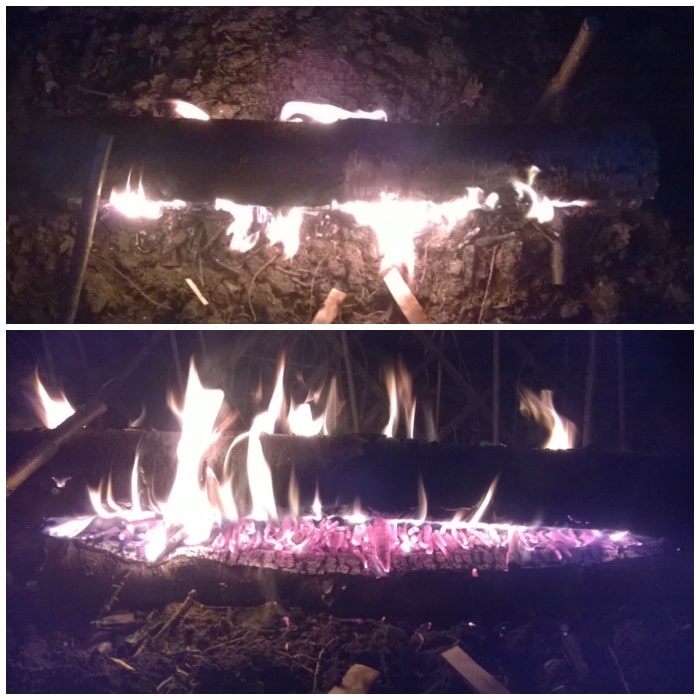 After I had used up the kindling the gap had widened a fair bit between the logs so I did not need to use the green wood wedges anymore. I used the wedges after this to insert larger pieces of wood into the gap along the length of the fire. This greatly helped combating the dampness in the main logs. I had to use the wedges as tongs at this stage as the heat was quite fierce. 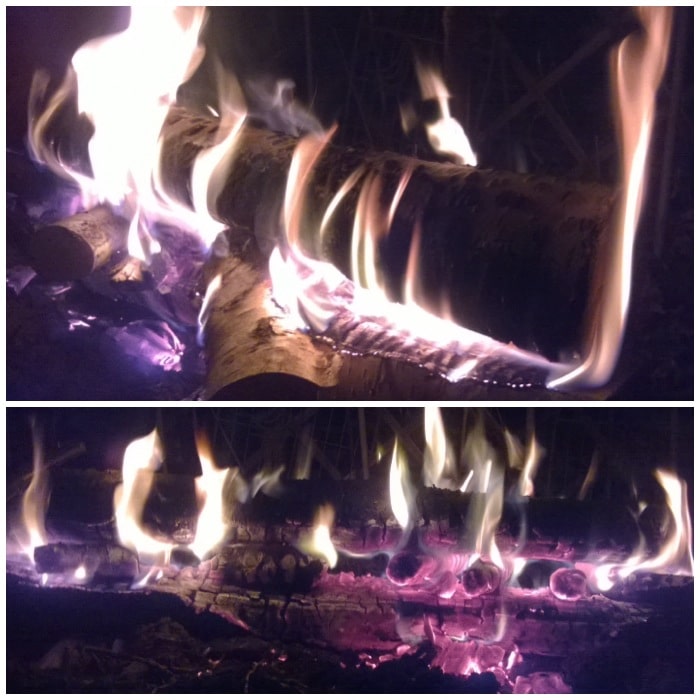 After two hours the bottom log was alight quite nicely and if I was sitting in front of this in the woods I would have been toasty warm. In comparison to a traditional set up I would normally use (criss cross lay for example) I needed to use very little wood to feed the gap.

In the morning I found that the bottom log had burned through where I had placed the last of my small logs (I concentrated them on the centre section). 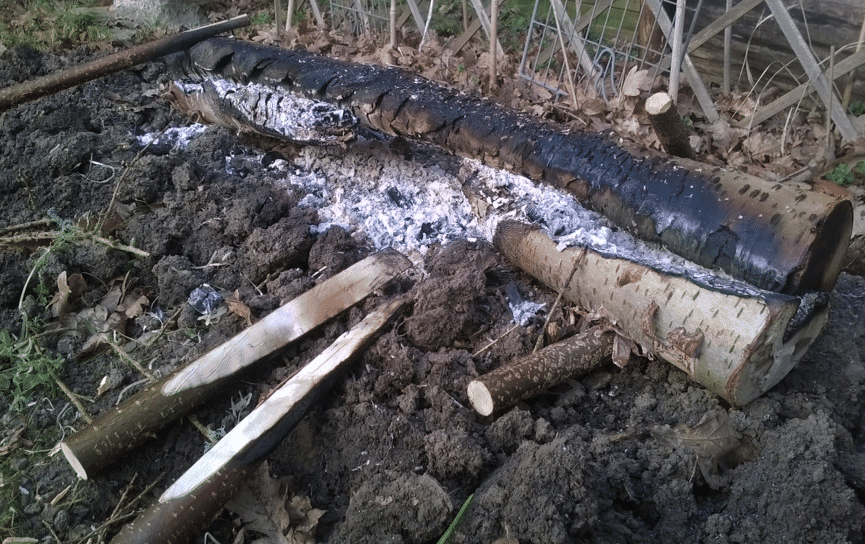 The top log due to its dampness had still not burnt through after all that heat but I was very impressed with this set up. 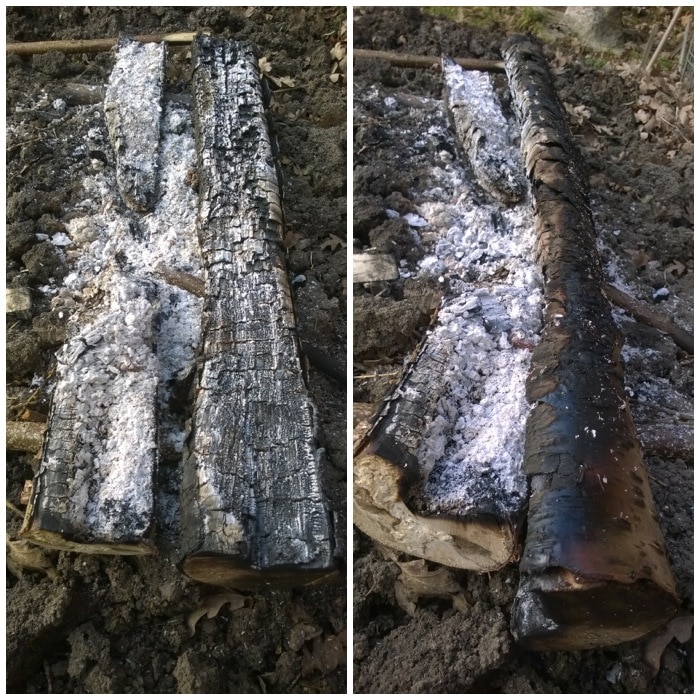 I am looking forward to later in the year when I can try this again but with larger pine logs and one day soon sleeping out in a lean-to shelter in an arctic environment with one of these fires to keep me warm.

There are some excellent long log fire pictures here on the Bushcraft UK to view and the Winter Trekking forum shows some good pictures of the Finnish army using the method. Also I have been sent a link