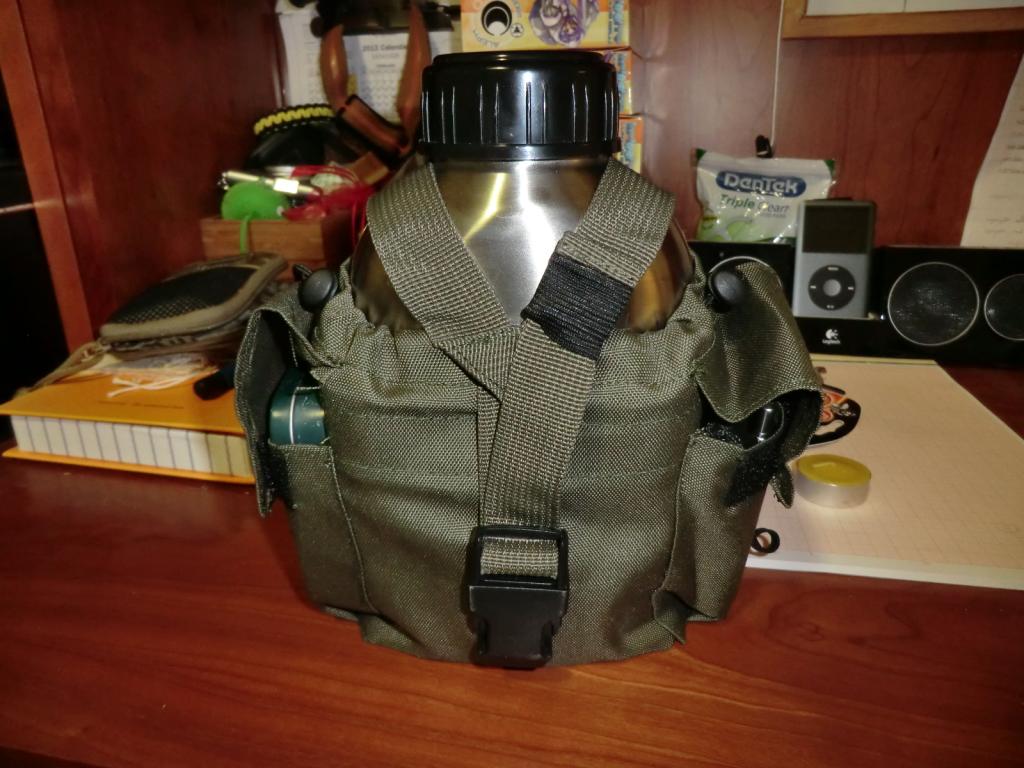 I have been a fan of the crusader cooking system for quite some time, so when I saw this system I was intrigued.
After a bit of thinking about it, and once all the additional bits came into stock at Heinnie, I pulled the trigger and ordered one.

The set is roughly modelled on the US GI mug and cooker, The US equivalent of the Crusader Cup cooking system.
It’s all stainless steel and very robust feeling.
The kit contains; 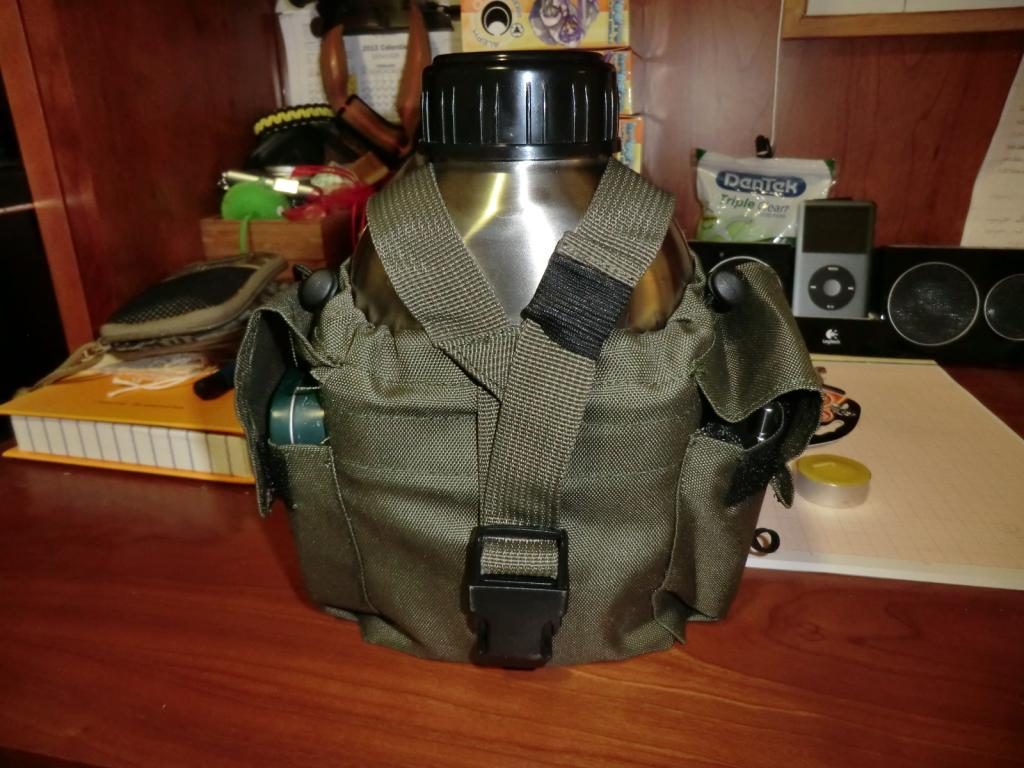 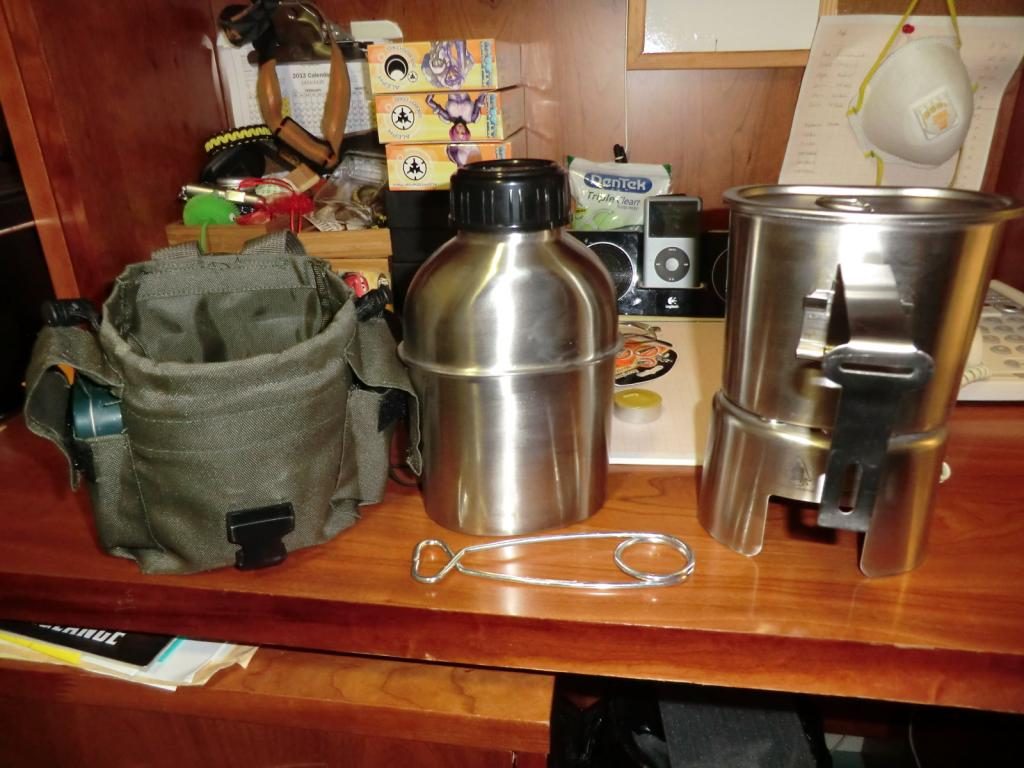 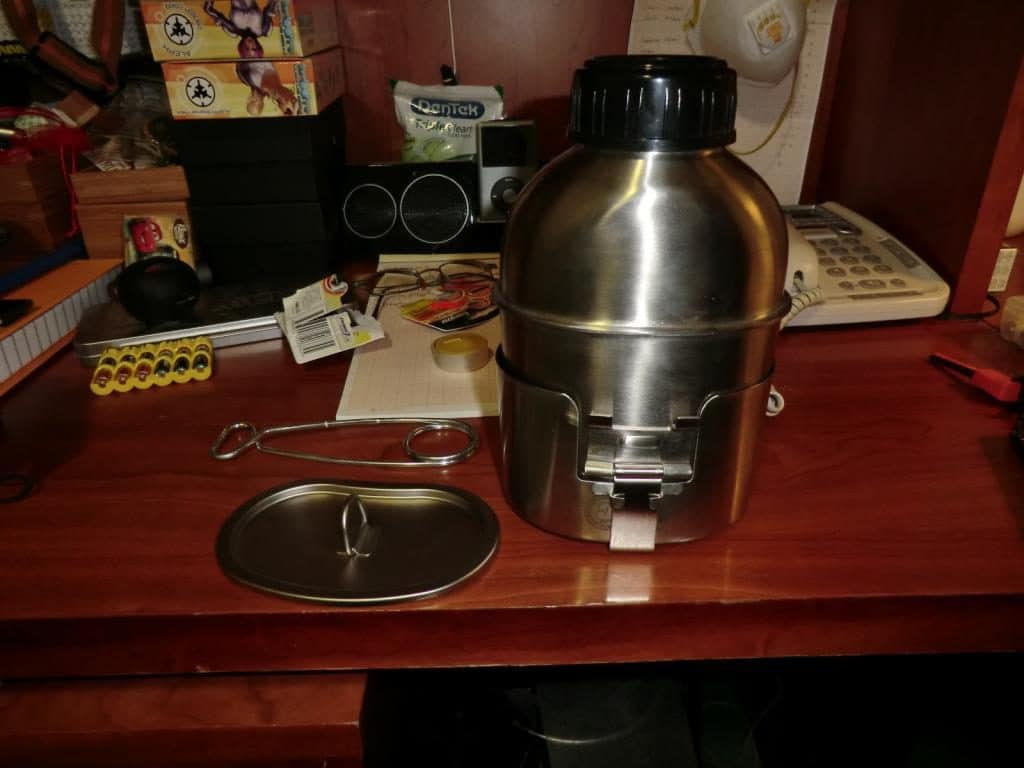 The Bottle
The bottle has a wider mouth than standard for a canteen style water bottle, and the lid has a nice silicone seal in it, it isn’t attached to the bottle though so there is a risk of losing it, although there is a good reason for that.
The reason is with a handy accessory, the bottle hanger.
this is a simple spring hook that goes into the neck of the bottle and allows you to suspend it over a fire to boil the contents.
A clever touch, I thought, and it takes up no room at all in the pouch.

The Stand
The cooking stand slips easily over the mug for packing, and is quite different in concept from the crusader version.
the idea is not to build a fire in the cooker, but to place the cooker in a fire and move embers into the base.
It will also take a trangia burner, and a photon stove could also be used I would imagine.
The mug simply sits on top of the stand, and is not as secure as I would like, a lip to hold the mug in place would definitely improve it, but it’s robust and serviceable as it is.

The Mug
The mug is of the old GI type with the handle that wraps under the base of the cup when folded.
there are handy measuring graduations on the inside, and it holds about 3/4 of a litre or so, a decent sized brew to be sure.
Again, Stainless Steel throughout with a secure catch to stop the handle folding in use, it’s a snug fit on the bottle too well put together. 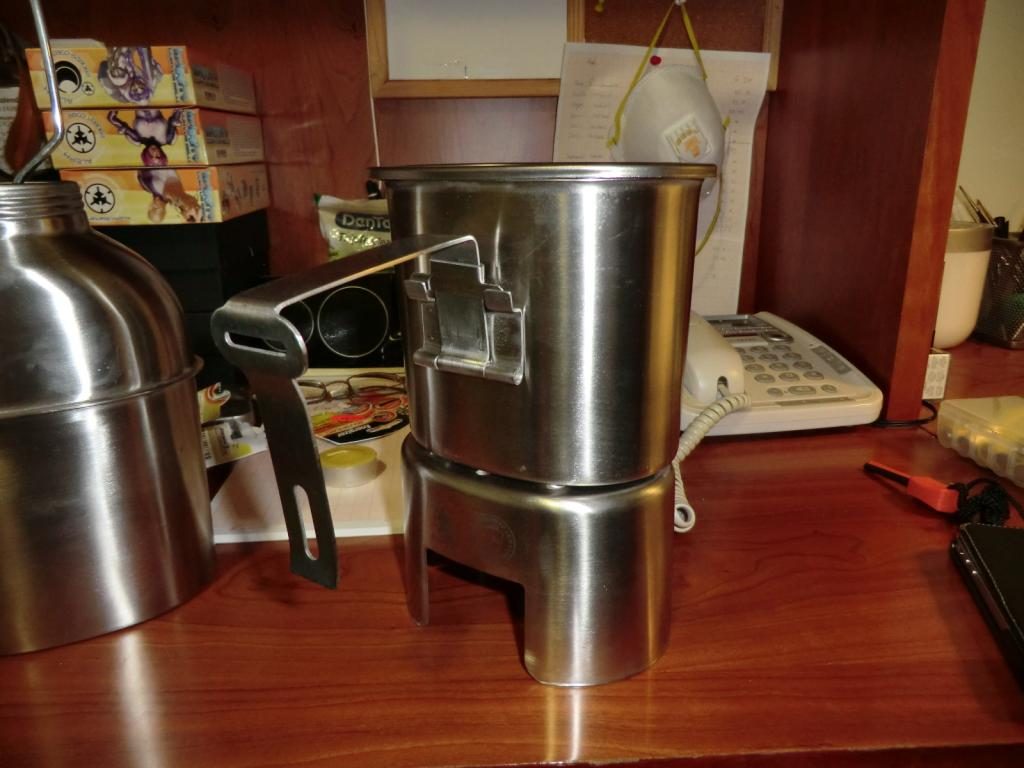 MOLLE compatible, and well put together, it’s of the open top style of webbing bottle pouch, it has room for the whole kit, with some room to spare, making it easy to get the bottle in and out.
there are two small pouches on either side, which will hold an altoids tin. I plan to keep a small brew kit in one side and a fire kit in the other.
Green as opposed to camo, so not too militaristic, which may appeal to some.

The Lid
A basic lid with a folding d ring for a handle.The lid snaps onto the cup securely, but could be a little tricky to remove when filled with hot liquid, and they recommend that the lit not be snapped on when cooking. Worth having, and definitely better than the plastic crusader version. I’m tempted to drill some drain holes in the lid. 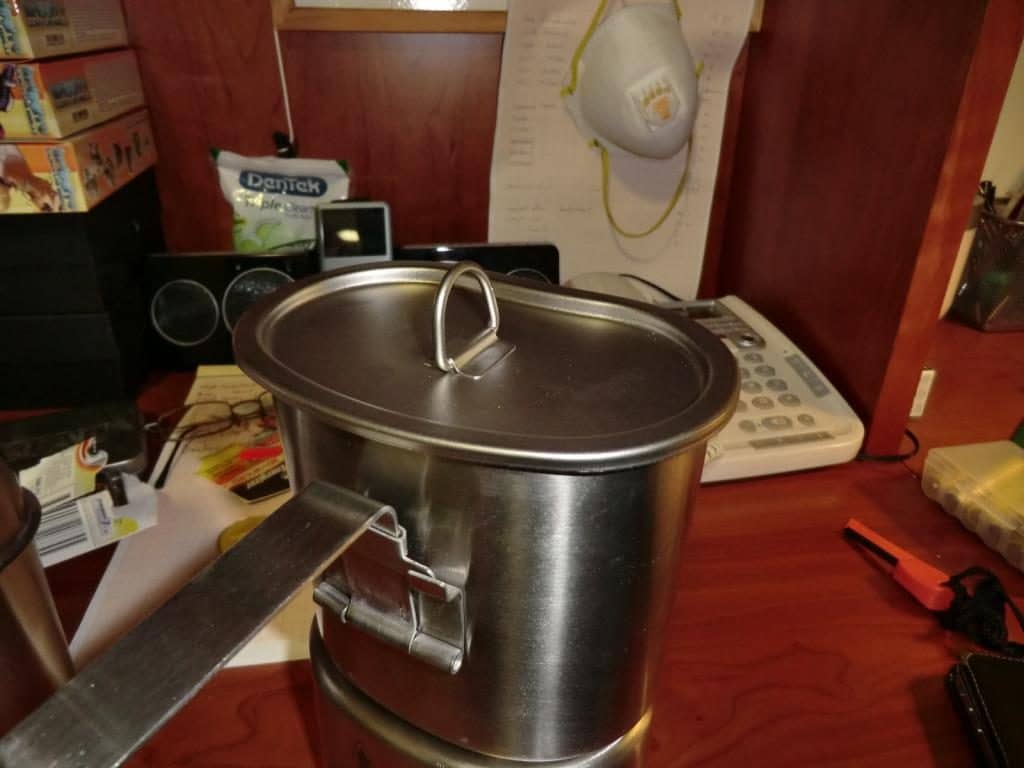 The Bottle hanger
As mentioned before, this allows you to boil water in the bottle, by suspending over a fire.
It also may be possible to use it to lower the bottle into an out of reach water source to fill it up, the spring is very strong, although it could risk losing the bottle. 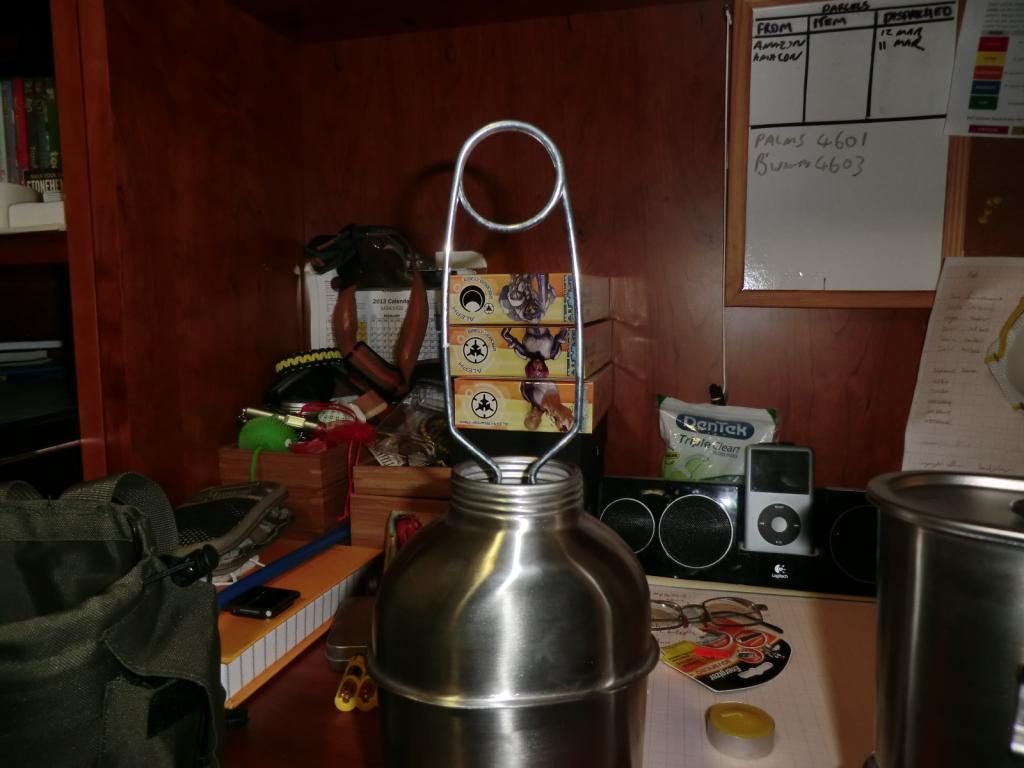 All in all an decent little set up.

The only real downside is the weight, it’s not for the lightweight campers amongst us