Day Out The Old Ways

Weekend just gone I went out for a walk.
I went up the North Downs, up by the village of Thurnham. I went up to that particular spot because there's been a lot of adders and lizards up there this year and I wanted to see if they were still about (there were a couple of lizards, including quite a big one - for the UK - but no snakes).
I also decided I would go for a walk along the North Downs Way. I have done this many times, and normally head west.
But this time it occurred to me that it has been a long time, a good couple or so years, since I'd headed east. There's a good reason for that - the section on the North Downs Way between Thurnham and Hollingbourne is a right sod. In those four or five miles it goes up and down the Downs about four or five times. It's a very hard walk, that short section.

But since I hadn't gone that way for some time I felt myself drawn to it and knew I had to go east.
So I did.

I made a little agreement with myself: that I would go as far as a particularly steep and hard ascent of the Downs called Cats Mount (you can find it on a map).

It was a real lift walking that way I'd not been for a long time, and when I had been that way I had generally started from Hollingbourne so usually came at it from the other direction: westerly ('Go west, young men' is an American thing, yet strange how we're still drawn westwards like a compass).

There were a pair of kestrels shifting left and right over the field, and buzzards circling much higher.
There were still a few blackberries so I picked myself some. There was also a small chalk shelf with a few trees on it that lurched out over the Downs, looking south to the Medway valley, and I stopped there and made myself a cup of tea and ate my cheese and tomato roll.

It was a very windy day and walking through the trees, along the Way, the wind shot down the trail to keep the sweat off. It was that perfect early Autumn light with leaves still green but a generous trail of yellow and brown leaves along the track. And a clear blue sky with big white clouds like children draw (and would later drop loads of rain).
After puffing and panting up one Down and another I decided to take a break and cut myself a walking staff. There was a stand of old hazel coppice with some arrow straight shafts so I took out a knife and cut one. I then sat there, on a fallen tree, and trimmed the knots and twigs off it so it wouldn't callus my hand.

There was that moment, as I sat there, covered in wood shavings, the sound of the wind in the leaves, the shimmering sound of a flock of goldfinches passing by, and nothing to smell but the bitter tannin of the leaves as they change colour, that it all seemed so perfect. So tranquil and peaceful. Like a feather on the breath of God.

So, chaps, make that effort to walk those old ways. Those ways you've not been for an age, wherever they may be. And cut yourself a walking stick if you have to. 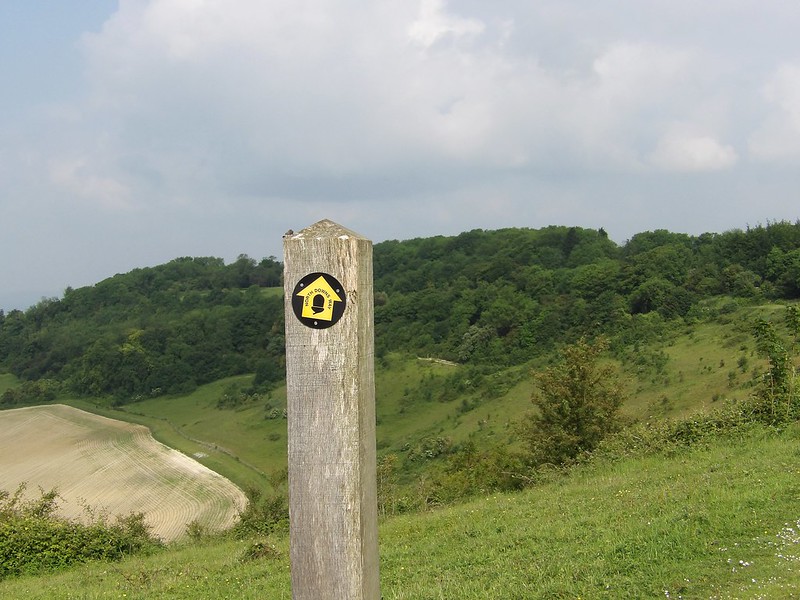 Reactions: Thoth, Toddy, JohnC and 5 others

What a lovely piece of writing. It conveyed a real sense of time and place and gave great pleasure. Thank you.

I took a breather when you did and nearly want to cut myself a walking staff......unfortunately I was in the bedroom upstairs at the time. Extremely well written

Lovely to read
Thank you for sharing your walk.

A totally different impression of the Downs to the one I think of. I've never been there and I didn't know that there were trees like that. For some reason I thought of it like a lowland version of our moorlands, and it's really not.
We live and learn, we really do.