Suggestions for a legal carry

I’m after a legal carry pocket knife, don’t want to spend crazy money but must be durable.

With a half-hawk larger blade and a smaller pen blade and at the lower end of the budget scale ... the Rough Rider Coalminer. It's hefty and looks old fashioned . 20 quid-ish
Ceeg

Seagull said:
With a half-hawk larger blade and a smaller pen blade and at the lower end of the budget scale ... the Rough Rider Coalminer. It's hefty and looks old fashioned . 20 quid-ish
Ceeg
Click to expand...

There are so many great UK edc pocket knives out there, but if you are staying away from victorinox, the rough riders are good.

My recommendations are as follows: 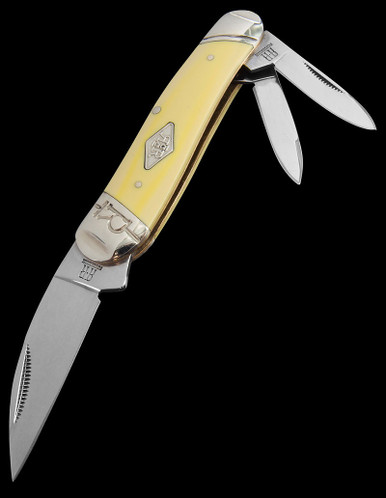 Was just going to say that model has the potential to be brilliant, but after sending back 4 of them, the weak back spring put me off

Just taken delivery of one of these, I can't have it yet though as it's for Christmas, but did give it the once over before it was whisked away, well made, nice back spring on all tools, blade has a positive half stop, needs a sharpen but hey ho, for the money it's brilliant.

Can't wait to use it.

No mention that you are avoiding Victorinox so any of their 91mm size would fit the bill (non locking and cutting edge under 3 inches). Have a look and see if any of the range takes your fancy. I've carried the handyman for over 20 years and lost count of the times it's proved useful.
Reactions: punkrockcaveman

The Victorinox Hiker is my current go-to but I also like the Mercury Two Use and the Byrd Tern.
Reactions: punkrockcaveman

You haven't said what your budget is but the smallest Victorinox that ticks all my 'most used' utensils is the Fieldmaster - blade, scissors, wood saw, bottle opener, can opener, and awl - but my preference is for the Farmer X.
Last edited: Nov 7, 2021
Reactions: punkrockcaveman

Have a look through the Heinnie UK legal section. There’s a nice choice, you’ll find something.

Our range of UK friendly carry knives, is dedicated to providing UK buyers with an easy way to shop knives, without worrying about the restrictions. Shop now

I have a couple of svord peasant minis, bit rough round the edges but great knives once you spend a small amount of time on them.

Spyderco UKPK is worth a look
Reactions: Nice65
S

I have TBS boar legal folder, I've been very happy with it and looks lovely. The joint feels robust and I've used it heavily without any issues. Having said that, more often than not I have with me an old imitation not-swiss army knife which does most of what I need. Nothing fancy but the little saw works fine for branches up to an inch and the blade does what I need it to do so long as I don't twist it around too much.

Everybody has a different idea of what they need "every day." That said the selection of nonlocking knives under 3 inch blade length is almost limitless. I always favored a 3 blade stockman style or a 2 blade trapper style or a Barlow style for most general purpose cutting tasks. All of those styles are available in a wide range of budget concerns.
Reactions: ANDGRIN

Athos said:
Spyderco UKPK is worth a look
Click to expand...

I suspect it might be out of the budget, but yes, if there’s one knife I carry almost daily, it’s the red G10 Heinnie version. Strong backspring, finger choil to prevent accidental closure, one hand opening, super slicey, low carry wire clip, light, strong, just an excellent knife.
Reactions: Athos

I've carried a SAK Prince model for many decades. I have found no reason to look for anything more versatile.

Nearest thing I suppose to actual everyday carry is my leatherman squirt, as that is on my keyring, however after that comes the SAK Farmer X which has the most useful and often used tools on it. I see rough rider being mentioned, I have a couple of them, not bad at all for opening letters, boxes and packages, cutting string and gaffer tape and what have you.

Athos said:
Spyderco UKPK is worth a look
Click to expand...

Apart from the fact that they are rather expensive, I think they are also an example of stretching the case of what is legal somewhat. I do not want to carry something I would need a barrister to explain. Nothing wrong with spyderco, I have one or two of them myself but even the smaller of them still manage to look more threatening and aggressive than more traditional penknives. I don't really like the fancy steel they are made of either, too brittle, I have broken the tip off one them, something that has never happened with an SAK.
F

I have a wide range of UK EDC stuff, the ones that stand out are a very traditional Sheffield hand made slip joint and a Spyderco or two. But I also have a SOG and a Boker tech tool that are only just behind the spydy and pretty cheap, for field use I would get a Svord peasant.
D

fenix said:
I have a wide range of UK EDC stuff, the ones that stand out are a very traditional Sheffield hand made slip joint and a Spyderco or two. But I also have a SOG and a Boker tech tool that are only just behind the spydy and pretty cheap, for field use I would get a Svord peasant.
Click to expand...

I have a Svord Peasant, its quite nice but for its blade length it takes up a hell of a lot of pocket space.
The pointed end of the plastic handle could do with being rounded off cos it doesn't fulfill any useful function but the extended tang and of the blade needs to be there in order for a friction folder to open and it adds a lot of length to the knives closed size.
I also have a Spyderco friction folder which is shorter but jeez its got a fat set of scales.
I've got big hands but that doesn't mean I want knife scales to feel like I'm holding half a brick in my hand, would be much nicer if they were slimmer. The tang end of the blade still adds a good deal of length to the knife when closed though.
Maybe if I used some form of silly little knife pouch to hold em in but that seems a bit "Tarquin from the IT department" for me and any penknife just lives in my back pocket.
Plus I've already got enough silly pouches with tapemeasure, end cutting nips, pencil, hammer and other carpenters work stuff in or on the side of em.
Reactions: plastic-ninja
You must log in or register to reply here.

Recommendations for waterproof over trousers?