My Gear Project is finished

I've had a Gear Poject running for a number of years and now I've managed to finish it.
Maybe one or two of you might find it interesting, so I'm going to show parts of it...

I consider this a personal success, because of how it has changed my outdoor life.


Seven factors have each contributed to improving the number of days I spend out in nature:
More about that later.


(I'm not trying to sell anything here. And I know not everyone like camouflage patterns, which I
respect. I also, of course, have completely civilian outdoor gear in flourecent colours.) 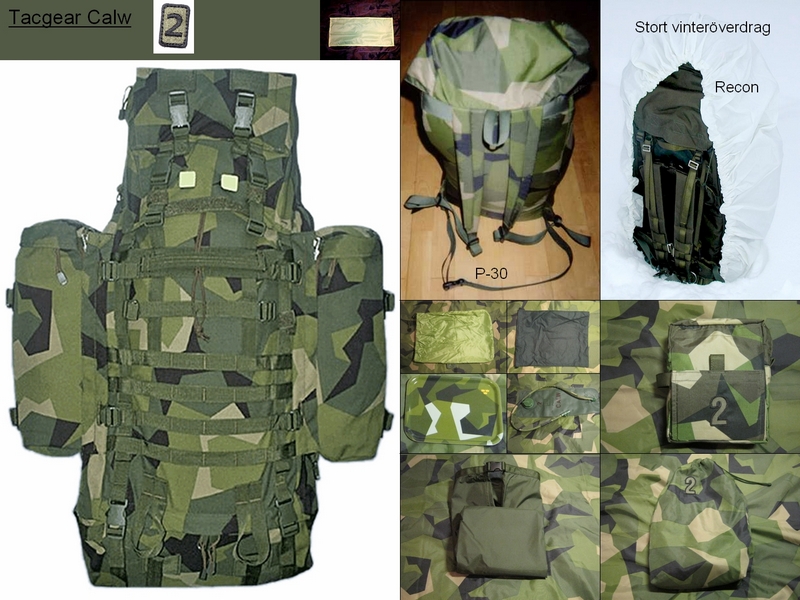 Four of my backpacks were chosen to get a complete set of gear each.

The gear are a signal panel, a small "mission bag" backpack, winter snow cover, two stuff sacks, a food tray, a water bag
with drinking hose, a militay watertight inner bag, a toilet bag with a large mirror and a bag which holds an outdoor kitchen
and all the cuttlery, fuel and stuff.

Each big sack has also gotten an axe and saw, but they're not in the pics. The Sacci Jägare-90 backpacks are the best I've ever tried and they also got a cover each for
an inflatable Thermarest insulation mat. 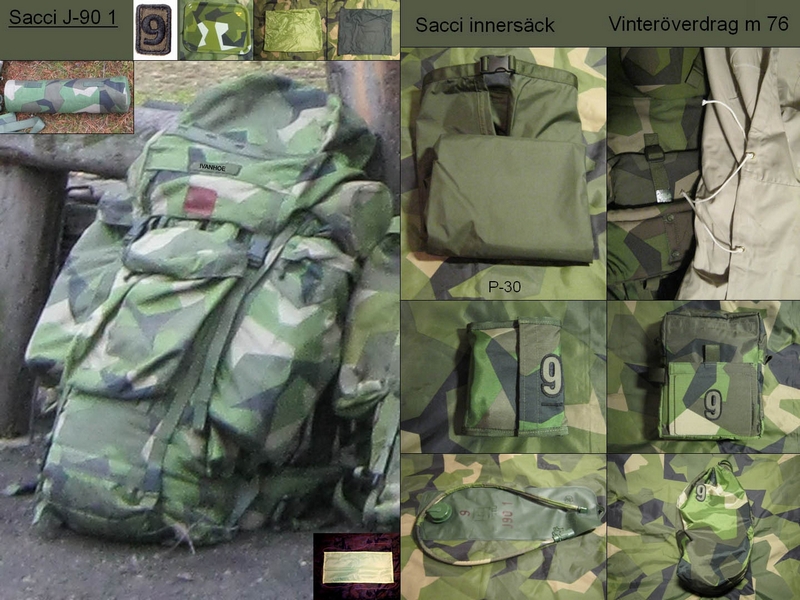 This Jägare 90 is from a batch that was manufactured for the medics at the Karlsborg K3 regiment,
which makes it have metal buckles and the three external pockets can be removed, as they are
fastened by zippers. 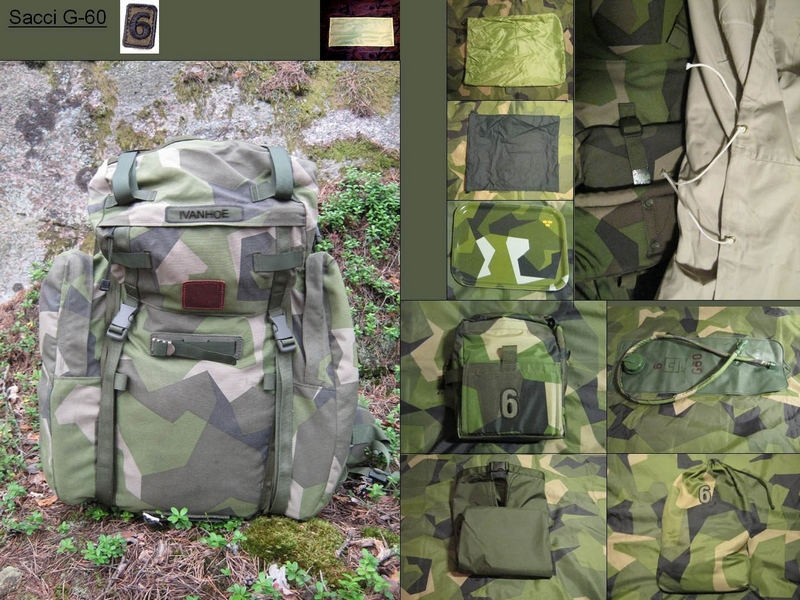 This is the Sacci G-60 backpack that has a metal external frame and has been reviewed by outdoor
press as "indestructable" and "bulletproof". 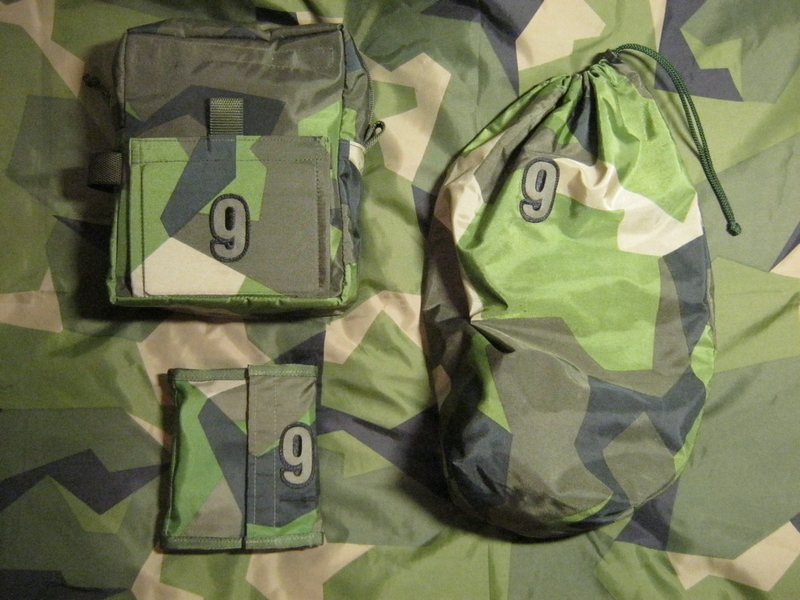 All the accessories have been marked with figures showing which backpack they belong to. 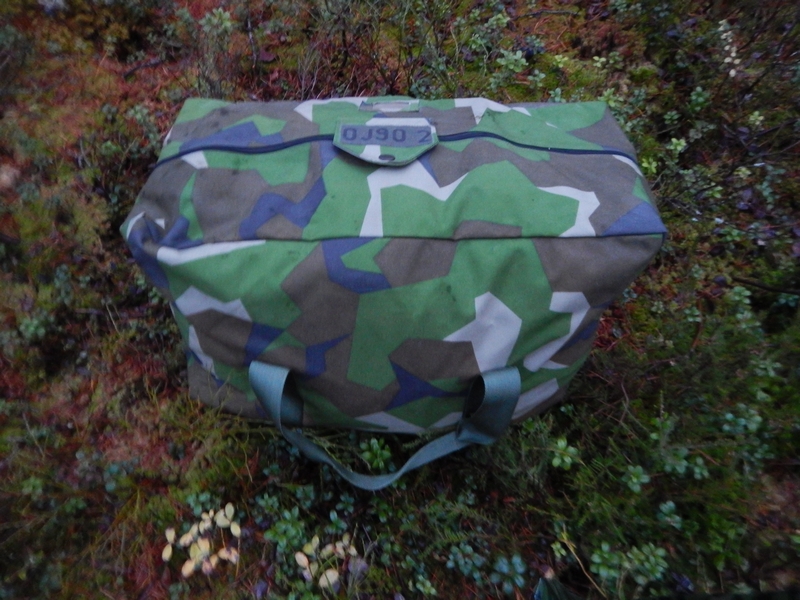 All four bags are stored in this type of "paratrooper shute bags" packed with most items in them,
so I can just grab them. Just load food and water and we're off! I've also got smaller Sacci backpacks with 30, 40 (this) and 50 metric litres capacity.

They've all got the same philosophy: ready packed and marked with numbers, just
like the bigger ones.


This image is an example of the digital inventory I've made, which runs over 130 pages and
also specifies which gear I've got in the cellar and in the attic, so I can find them easily. 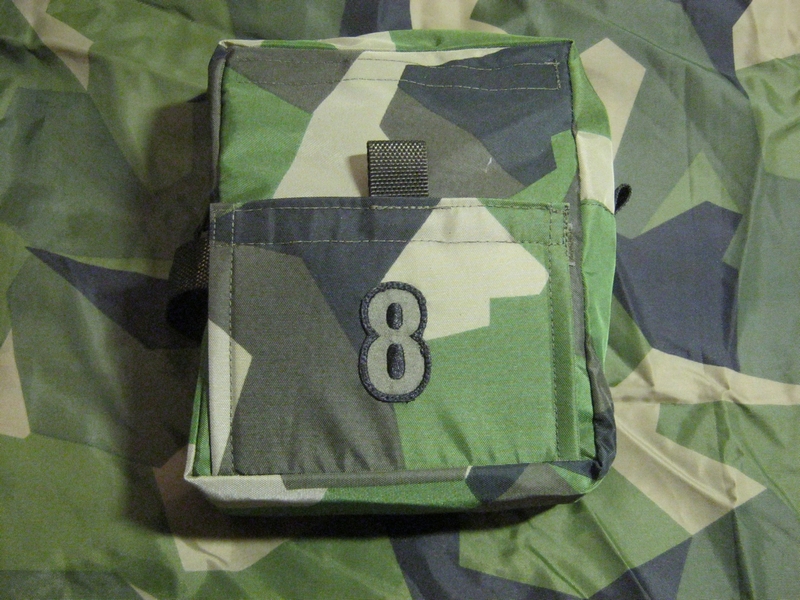 The toiletry bags are made / were made by Recon AB, a small firm in Uppsala.

I really love them!

I acctually had to have one each to the big packpacks and to the two more most frequently
used sacks. 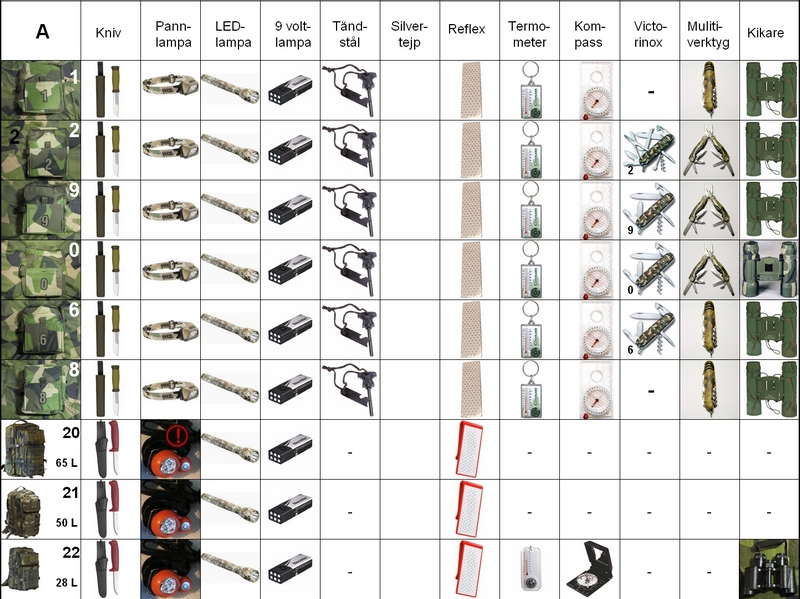 With three lamps it is unlikely all will run out of batteries at the same time, and if they do there's 11 more
in the car.

By now I can put up my tents in complete darkness and put all my stuff in the right places in the tent
just by feel. Sleeping mats, sleeping bags and everything.


More about the three sacks there later. 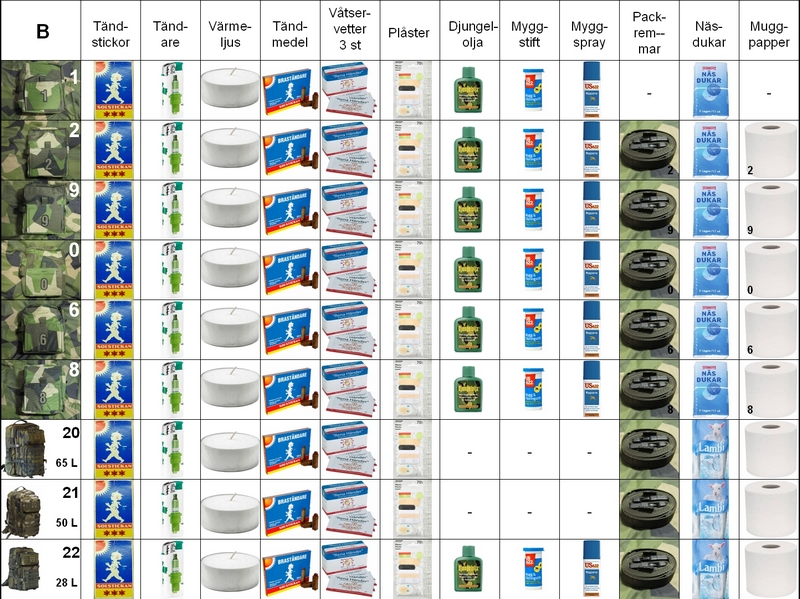 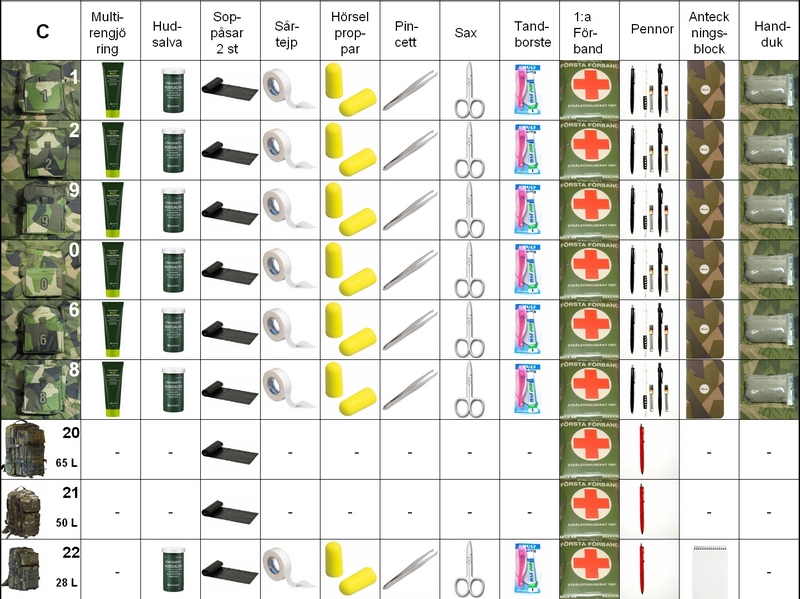 The pics are not totally up to date, as I've replaced the three toy head torches with better ones.

All items are acctually chosen from my own experience.


There is a logic to the empty fields for the two larger packs: I have a small bag in the small 28 litre
sack, with the items in them, which I move to the larger ones when I use them.

Those sacks can even be attached to eachother, making it a very flexible option.

I have accumilated all the niff naffs over years, in order to make the cost managable, just as I
have with the rest of the gear. 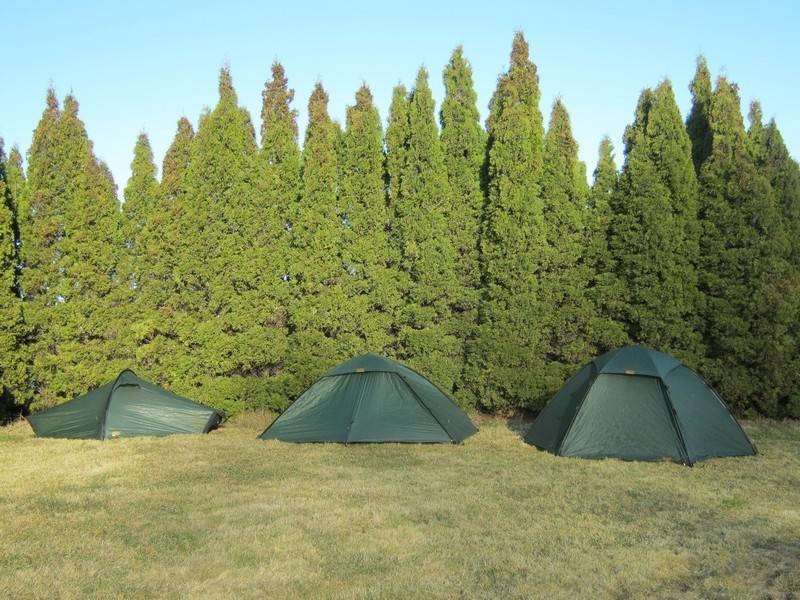 The four big sacks have gotten a high quality tent each, here the Hilleberg Akto, Unna and Staika,
which I've all improved in various ways and given green guy lines and metal friction locks.

Together the tents and tarp make a very flexible set up. 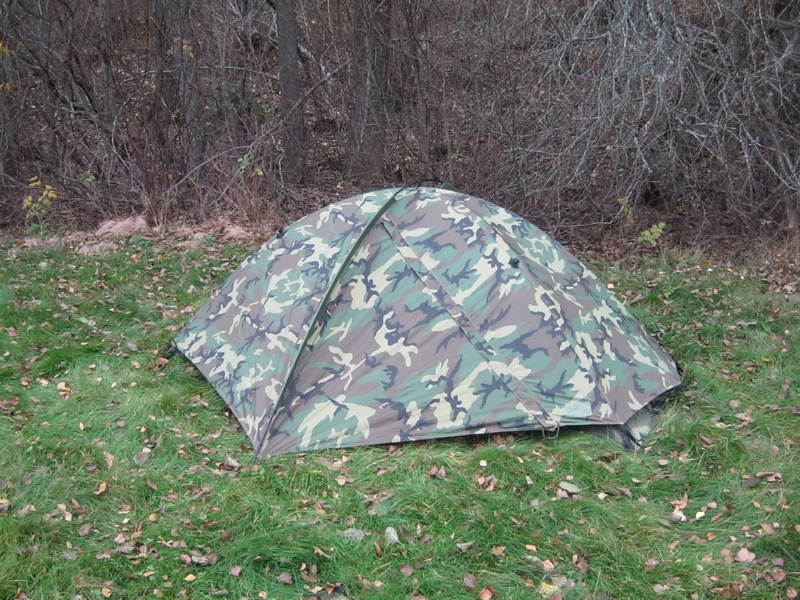 The fourth tent is a hexagon US army TCOP tent, which is interesting because it doesn't let light
through the fabric, which means I always go to bed in an absolutely pitch black tent.

A real luxury when up north summertime, when the sun is up all day and night. 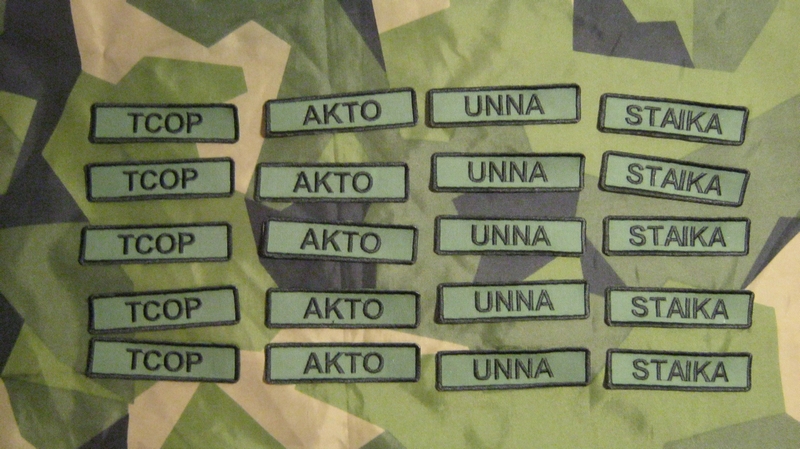 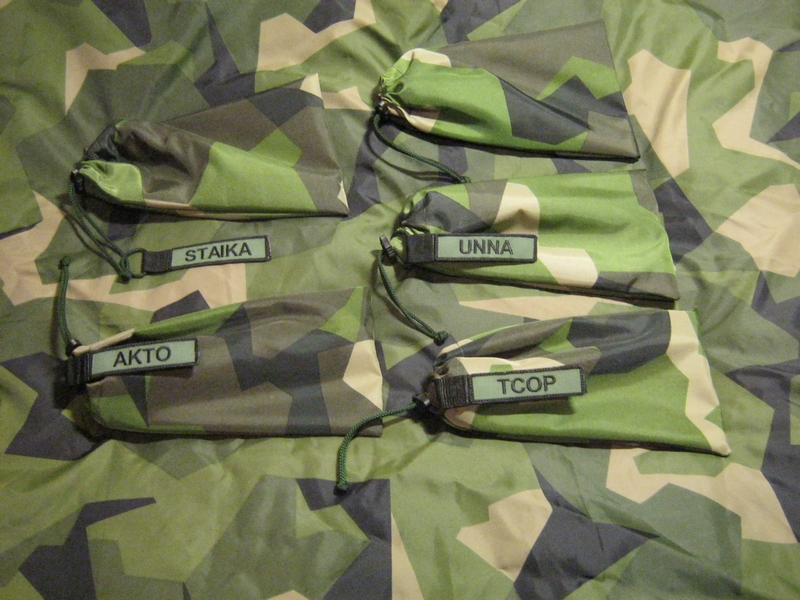 ..which I use to mark all my bags with. I've made the bags myself and I can also have the lable
inside the bag. 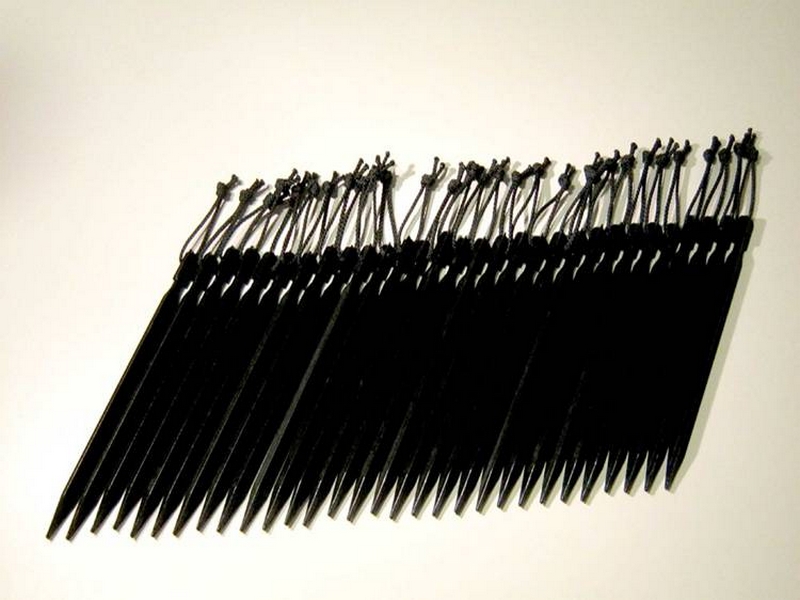 I got 70 Y-peg tent poles for my tents, but they proved to easy to bend.

Lots of lines to make and knots to tie.. 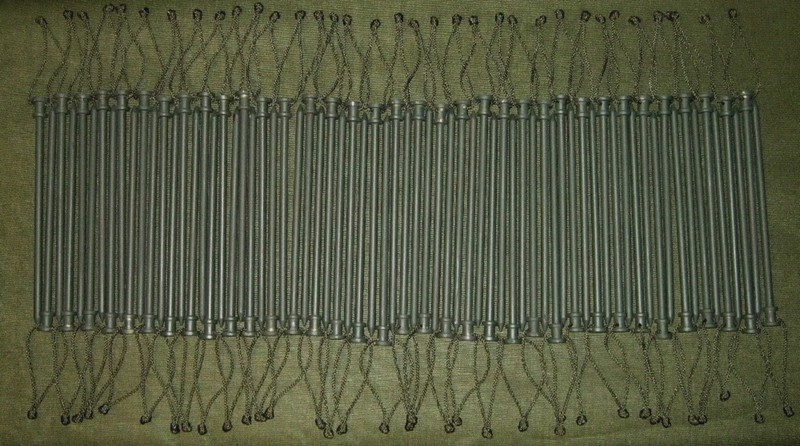 I got 70 aluminium pegs instead, which I painted with hardened MOD issue paint.

The pic is taken with a flash. In reality they are really mate olive.

I wanted Hilleberg aluminium pegs, but that would have been too expensive, so I bought "fake" ones from
China, that proved to be very good! I use a carabiner to connect all the bags, so the right ones comes along when I take out the tent
from my wardrobe. 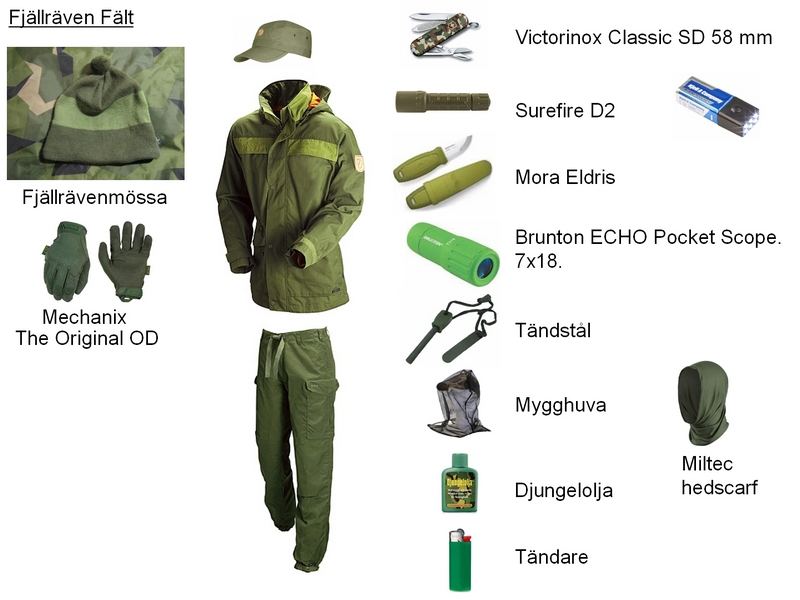 All my outdoors clothes have the stuff I want them to have in the pockets. This is the Fjällräven Fält set
which was developed in collaboration with the world renown survival expert Lars Fält, and it comes
with a firestarter and mosquito net. 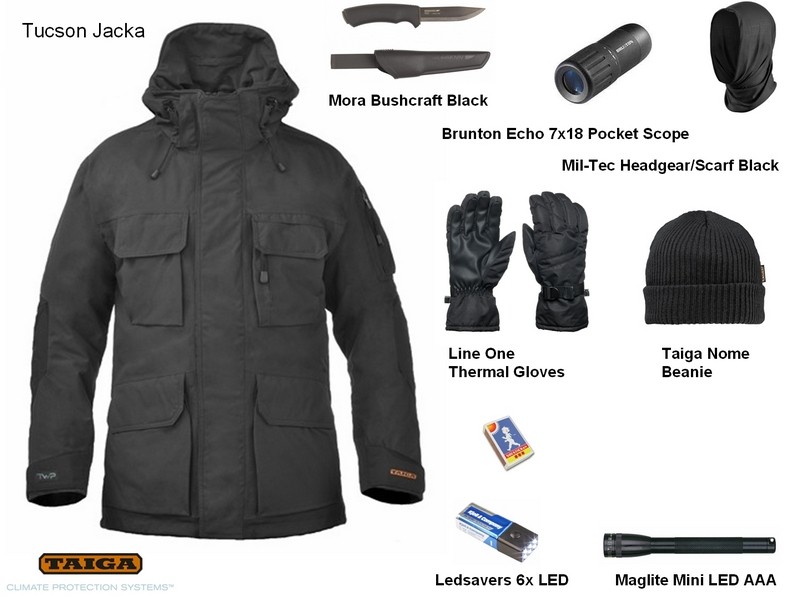 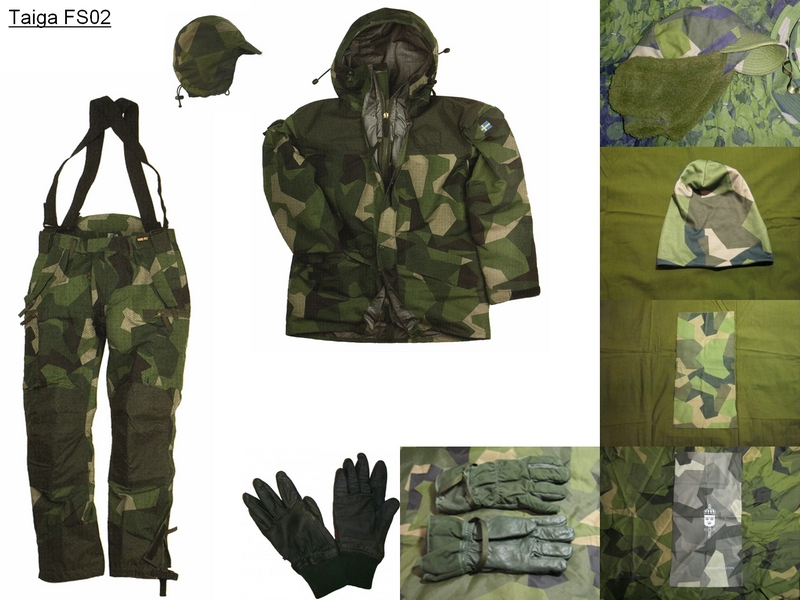 More Taiga Goretex, the FS02 set. The winter cap by Wigrens is the warmest I've seen and the
green gloves from Recon is the most heavy duty gloves I've seen. 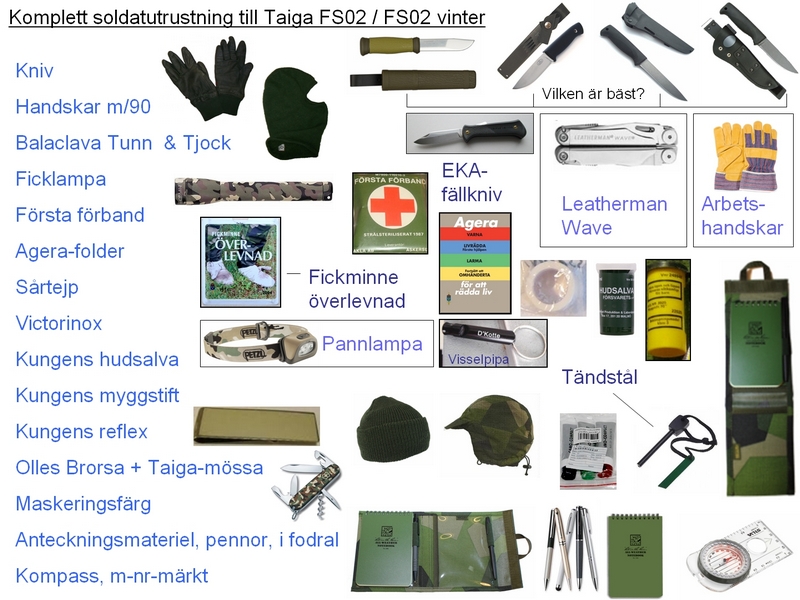 And some accessories for the set.. 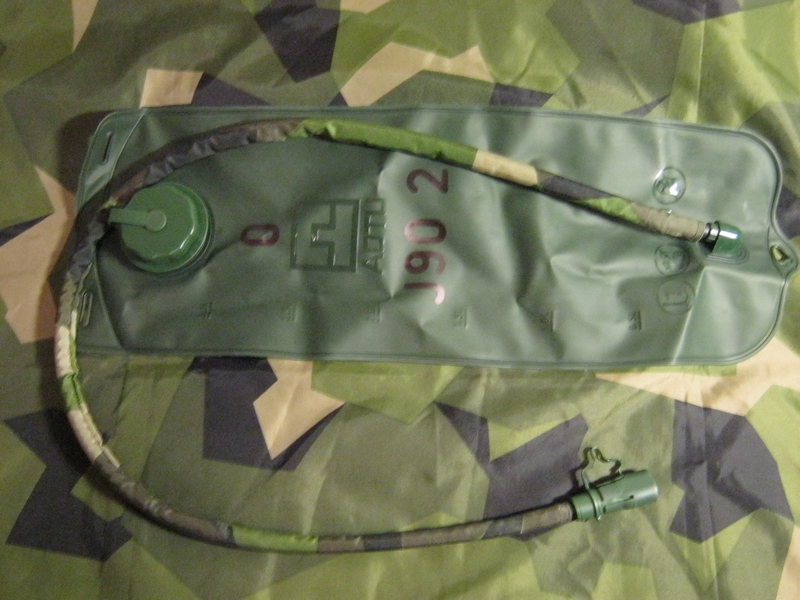 I've made hose socks for the water bags, to at least give the impression they are made for the
sacks they belong to.. 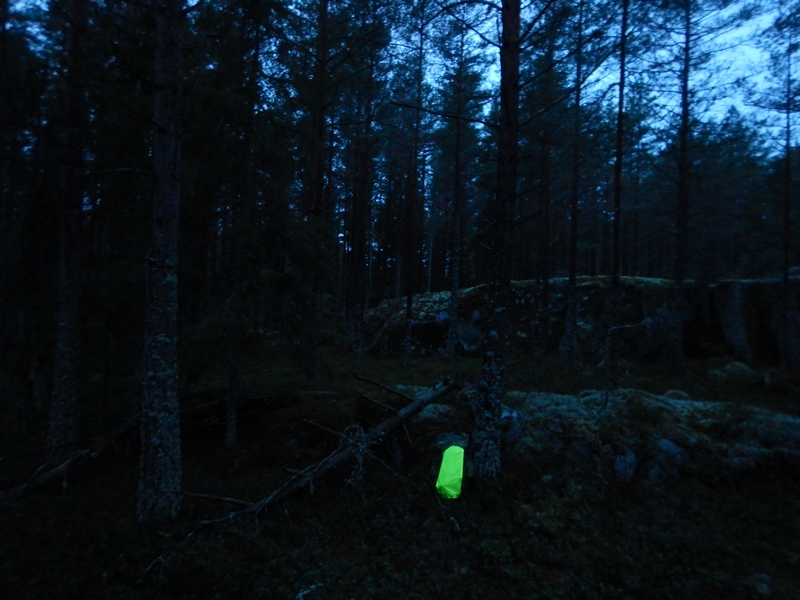 And here's one of the signal panels I've made for the backpacks. They fit in between the straps.
I made them because there were a lot of hunters in the woods at one time.

The picture was taken without flash, so the very thin and light fabric is very effective. 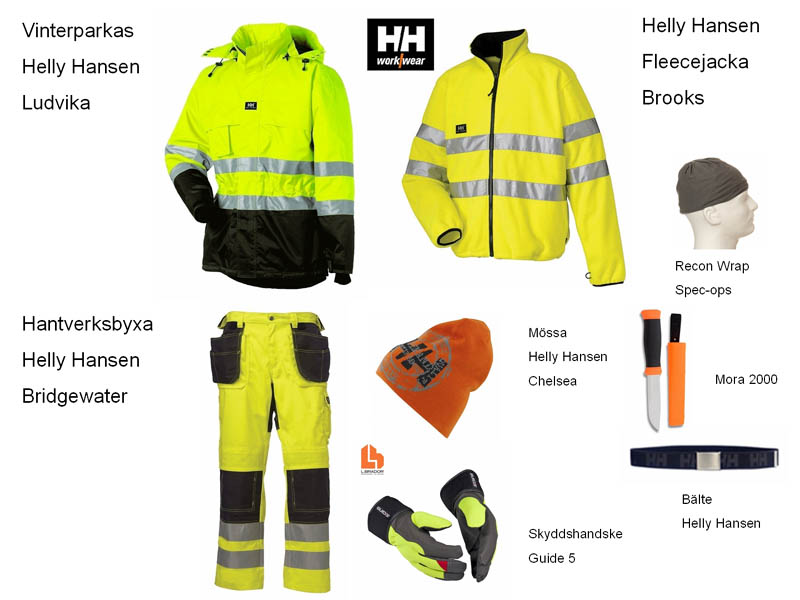 The hunters also made me get really reflective work clothes from HellyHansen.

I researched all shops in Sweden to find the absolutely cheapest clothes and when I got them I
added the pockets and other features I wanted. And these clothes are bloody marvelous!
Last edited: Jan 12, 2020
Reactions: Bluetac, SCOMAN and Janne

Fascinating to see your thinking and gave me food for thought about my own kit. My circumstances are not the same as yours so naturally our solutions will be different.

I disagree on one point, however. You say you have finished your project but I don't think this is possible. Every time I think I have finally got my kit organised perfectly i think of something that needs changing, usually after a trip. I have striven for perfection for well over sixty years now and still haven't got it right. I still regard my kit organisation as a work in progress. Age itself forces me to re-evaluate. For example, I now have a pouch that can be transferred from pack to pack containing my spare spectacles, heading aids and batteries and my heart medication!

Congratulations on your English by the way. I wish I could write as well in my second language. I look forward to reading about later developments with your project.
Reactions: Nomad64
J

Ivanhoe, do you have different equipment requirements for different seasons?
Where in Sweden do you live?

I personally prefer to have more visible colours on the small stuff, as I am forgetful and very messy! But, of course, personal preferences etc... 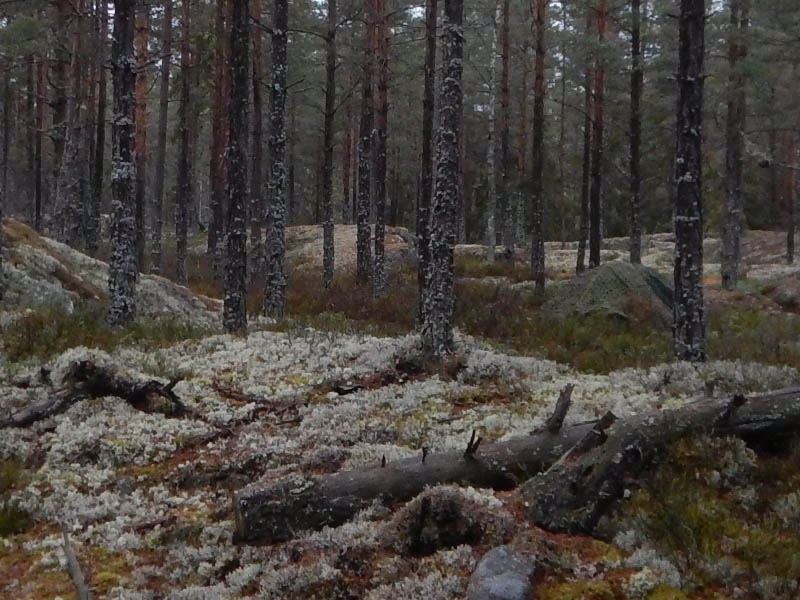 I like to blend in to the enviroment and not to disturb other people or animals. I love to move slow
and stealthy through the forest.

I've gotten modern camouflage nets from SAAB Barracuda that you can see out from, but not in to,
and that even hides your infra red (or heat) signature.

I've made them exactly as big as their respective tent, to reduce the weight and I've folded the edges
and sawn them just like the sides I haven't cut, complete with fastening straps and loops. 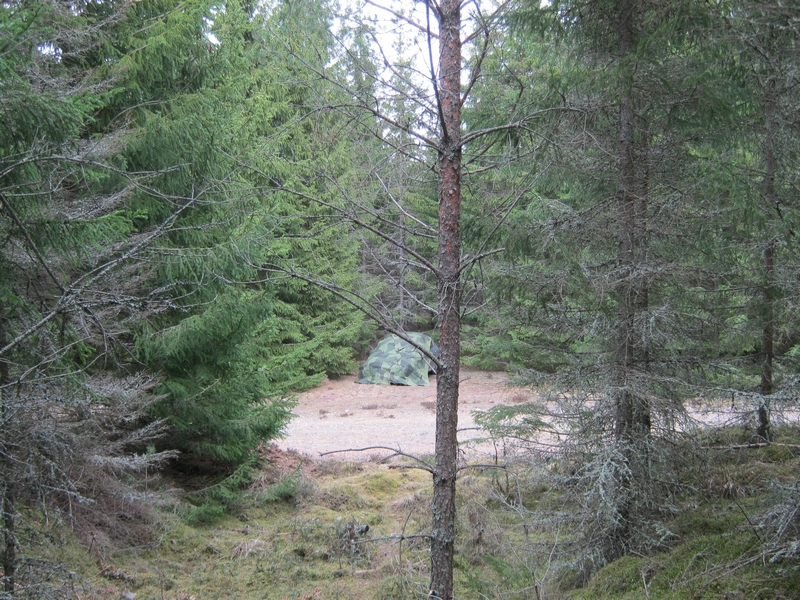 Here's another type of concealment I've gotten for my car. Imagine if I'd backed the car 3 more
meters into the foilage.. 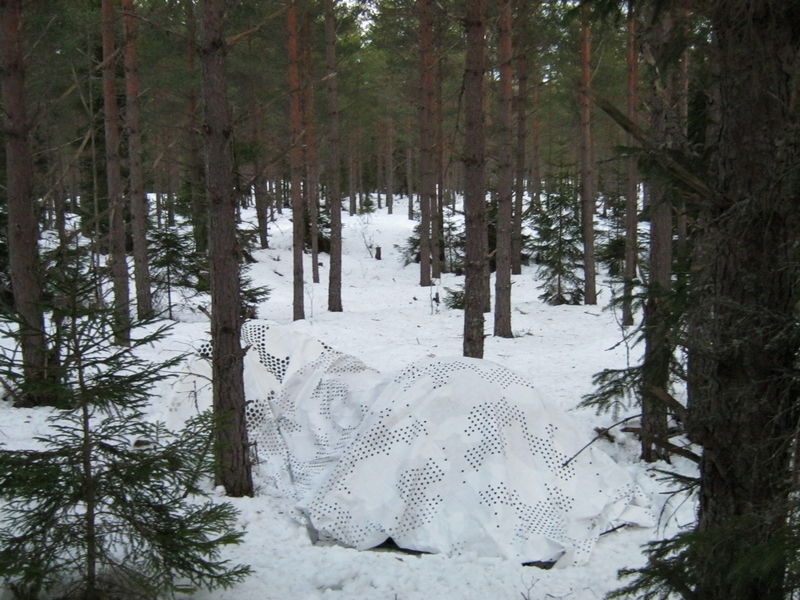 And here's two similar versions for winter use.

The final thing I did was to buy these three backpacks and equip them.
(It's the same ones you saw in those charts above.) 28, 50 and 65 litres.

They're toy quality sacks, but I always have them in the trunk of my car, loaded with clothes,
gear and food, so I can get out in nature whenever I want. This way I've reduced the threashhold
of acctually getting out to almost nothing.

This has really taken my outdoor life to a new level!


(Flak is another of my aliases..)

This is what I always have in my car: The sacks, sleeping mat, a bag with First Aid kit and
all the car stuff like motor oil and such, a tarp and a road map book. And a outdoor kitchen
with all the extras.

I know all of this might get stolen some day and that's why I can't have any Sacci sacks
in the car, but these I'm willing to risk. It's well woth the risk anyway!

I also always have two pairs of boots and this big 1:50 000 map of the closest area with me.
And a smaller cut out of the area I visit most frequently. 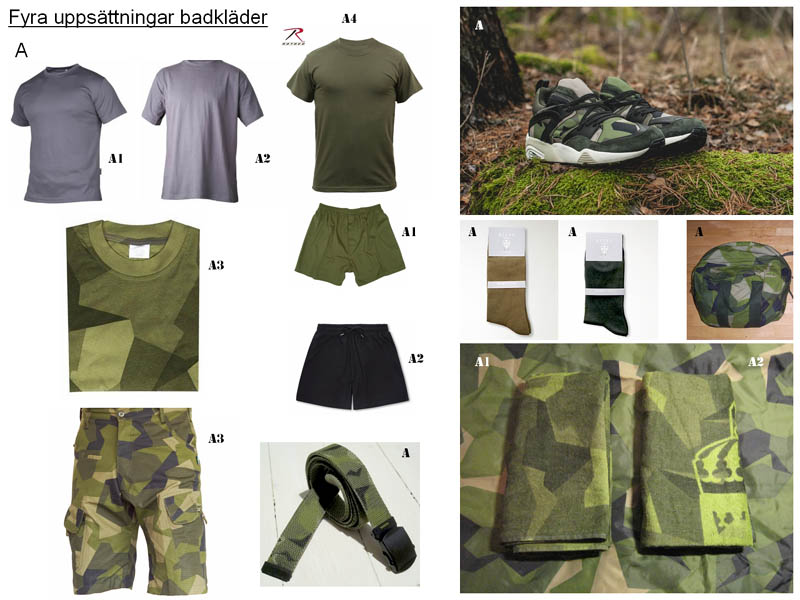 Last spring I decided to get four complete sets of swimming equipment.
I know it's a bit childish to have camoulfage on swimming gear, but I am childish..

I searched everywhere and got the cheapest stuff possible.

The gear itself is secondary, what matters is the result: I have never swam as much in lakes as
I did this summer! Almost every day, the whole summer.


I've had a packed set in my car, all summer.

And now that it's winter, I've replaced the swimming gear with winter clothes.

Anyway, I've concluded my Gear Project Alpha and I'm pretty pleased with myself.

I have managed to get propper gear that's durable, snug and that works well together.

You will miss buying new stuff!

It looks wonderfully (if obsessivley) organised.

Why arent you going to Greenland? I know someone who goes there every few years.
T

He must come from a long line of Quartermasters, though I guess I slightly agree with Tengu.
You must log in or register to reply here.

Is it stil worth carrying a compass?