Just a small thing but something I've been meaning to do for a while which was to make some coils of waxed thin natural cord tapers. I found a roll of about 1.5 or 2 mm jute string under the work bench and had a double boiler with a vouple of pounds of freebie beeswax so thought why not? Hemp would probably be better, the tiny rolls you get in head shops made by Raw are hemp/linen, but jute is what I had.

Simply I ran the cord through the molten wax slowly enough for it soak all the way through and pulled it through a rag to make it smooth then coiled it up tight and squished them together. To use just pull the loose end up at about 70 degrees and light, pulling out more as required. 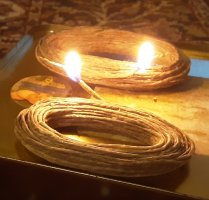 I tried double dipping the roll the front but it doesn't seam to have made any difference In burn time or brightness.

When I get some thicker wick I'll try to make a bottle light like I saw in a book on American Civil War material culture. It looked like a thick parafin n wax taper coiled in a single, layer around around a labelless wine bottle. The top end was pulled away from the bottle and lit and more pulled out as it burned down. I'll Inflict a pic on you when it's done. May dig out a old beer bottle...

I love that.
Really simple.
Natural
And beautiful

Evidentally you can get taper rolls from shops specialising in church candles looks like parafin wax, but wheres the fun in that?

Could have made great use of such things early this morning here. There's a warmth to candle/wax light which is unmatched by anything else.

Big wind in the 4C rain dropped a bunch of trees on our power lines. Made coffee on a cartridge camp stove then went back to bed, it was so gloomy.
Reactions: Brizzlebush

I'm sitting here trying to clean and repair three propelling pencils. They get kind of clogged up with graphite and the wee grippy thing doesn't, so the lead's just keep slipping back with any pressure.

Anyhow, seeing your taper candles, it somehow occurs to me that surely there could be a feed mechanism on similar lines that would keep the roll of waxed taper in a tin (like garden twine tin, with a wee hole in the top) and the taper coming out like a candle.....one that would snuff out if it got too short rather than catching the roll on fire.

They are very easy to make and they are of course water proof being soaked all the way through.

I looked on ebay and you can buy coil candles but they are prohibitively expensive.

A Google on "Candles by the hour" will lead you to various coils that burn for a given number of hours and various holders for the same, most seam to be copies of candle jack's which were actually used for sealing envelopes not for light. A normal candle would be much less hassle to use for any prolonged period.

Hi Mary, I hit send before seeing your post. A horizontal coil inside a tin with a external winder would do the job, I've not tried burning the wick vertically but I suspect that if they are like rushlights you'll need to slope them to burn properly it would be easy enough to solder a bit of tube set at a angle to the lid that would force the wick to come out at the desired angle and act like a automatic snuffer like I use on my old school balsa and tissue planes to put out the fuse dethermalisers.

Ps further poking about the net you can get balls of 2mm beeswax coated hemp wick, 100 foot for £10 or less. It does look like they skimp on the beeswax and they do use the term coated rather than soaked in.
Last edited: Sep 18, 2021
Reactions: Toddy

Might be pretty nice stuff to carry in a fire lighting kit. Even to use an 8" piece to get a Coleman green box petrol stove lit up with out burning you hands.

Yeah, the stuff sticks pretty well to itself and I was thinking of wrapping a bic lighter in a yard or so of it. The stuff does blow out quite easily but thats just a matter of technique really.

I'm also wondering about the viability of getting a square of really coarse, loosely woven sack cloth and soaking that in beeswax and either using the whole thing as a a emergency ire starter or pulling a thread off at a time and using that like the wicks. Somewhere Ive got some 3 inch tape, the stuff they used in old school upholstery were the weft is a continuous thread so you could pick off as long as wick as you want and then when thats gone you can use the warp threads as however long the piece was wicks. The frayed end of the piece would take a spark well i reckon if you needed a emergency fire starter. Of course any of these wicks could be used for sewing with a suitably large sized eye to the needle.

Theres plenty of sources of jute tape on the net, as well as upholsterers florists and plasterers use it although the later use stuff with raw edges and some of the floristry stuff is also cut outof wider pieces and the raw edges overlocked rather than with a woven selvage.

See if you can score a jute coffee bean bag. They are huge, like 60kg.
Used to be cheap until people realized they have cool images.
I framed one and hung it on the wall.
Pick that fiber/thread apart and you will have miles and miles of it.

As it happens I've a few sacks like that, bought on the off chance they would be of use. Back home they ( coal miners as it happens ) would use them to make rag rugs from and one of the sons threatened to have a go but I digress.

I seam to have lost a post in which I suggested a improved method of making the 2mm wick.

Drill a 2mm hole near the rim of the wax container, run the cord into the pan through a ring on a weight in the bottom of the pan and out of the 2mm hole. Draw the cord/wick through the molten wax sufficiently slowly that fibers become completely soaked with the excess scraped off as it passes through the hole to fall back into the pan. A marker at the desired distance would give a given length.which could be cutoff and rolled up when cooled. Alternatively the wick could be wound directly into a spool/bobin.

I tend to ovefthin,these things.

Even more messing with wax!

Having seen some on You Tube and as a variation on the slowmatch tinder lignter but using wax to make it water proof and burn with a flame rather than smoulder. 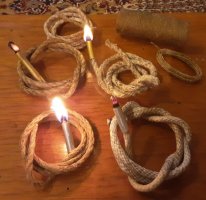 Two I soaked in beeswax, one linen,one jute and the other three in paraffin wax, two linen one jute. The widest is about 1/4 inch. I've not properly tested and compared them yet but they all burn.

While the beeswax was good and hot and since the wife had requested some of the thin smokers wick I made her a few yards then thought stuff this and threw the whole reel in and weighed it in place. After 5 mins i pulled it out and gave it a good shake and let it set. It seams to have soaked all the way through. It's a lot easier than doing it in small lengths.

Tom
Last edited: Oct 4, 2021
Reactions: TLM and Toddy
You must log in or register to reply here.