Hi all, I'm planning to run a shellscrape activity for some kids, it's to do with a veteran group I'm workingwith.
I was in the Infantry T.A. in the early 90's and the shellscrape was a common overnight shelter for 2 soldiers.
(the kids will be digging it....probably in sand.

If you're an ex infantry soldier you will know what I'm talking about, and you've more than likely dug these and slept in them.
The basic hole dimentions were roughly the same size size of a poncho laid flat on the ground and you dug out a rectangle about the size of a double bed mattress 7ft x 5ft x 2f you'd always add a foot or so gap at the foot end for storage of webbing/bergen.

The removed soil made a rounded wall/mound about a foot wide and high that surrounded the hole on all sizes (apart from a small slope at the rear to crawl in and out) the wall tapered down to groundlevel,

The wall at the front (facing the enemy) was slightly longer perhaps (2ft wide)and had a built in shelf on the inside you could use as an arm rest.

I've done a Google search and asked several veterans I know that served in the British Army and RAF regiment from 70's up to the 1st Gulf war, and kosavo, and they all remember making and sleeping in the shellscrape but, were like me, were taught in the field, word-of-mouth. I never saw any training staff use notes or plans so I'm assuming, it was just common knowledge.

My question is this, was there ever an official document or even a line drawing with specific measurements of how the shellscrape should be built?

I'm guessing perhaps if there were a document it would probably date back to post WW2 when "Platoon harbours" type overnight camps became common, perhaps after 2 man tents were a common sight, or perhaps when 58" gear with the poncho and shovel were issued? just a guess.

Apart from 2 leaky shellscrapes I stayed in, I found them really quite comfortable to sleep in, you could adapt them slightly to make more space and because of the surrounding soil they were always quiet and well insulated against wind and cold. once you got a hexy going they were really cosy.
and because they were low to the ground they were very easy to camouflage.

It would be dead easy to just make a shell scrape the way I was taught, but it would be nice to know if there is an official document.

I've looked in British Army issued MoD Aide Memouires, field guides and MoD training pamphlets, "Survive to fight", "Combat and survival" books and magazines but the only thing they ever show is a few "trench designs", never the the humble shellscrape.
This video again shows roughly how to but it's very vauge, about the dimentions and the detail
https://www.facebook.com/britisharmy/videos/rlc-shell-scrape/10159725890355615/

Heres another picture this give a nice idea about the space inside and roughly what it looks like.
basically if you stood up in it the top would be level with your knee, your whole upper body would be exposed, it is definately NOT a trench! 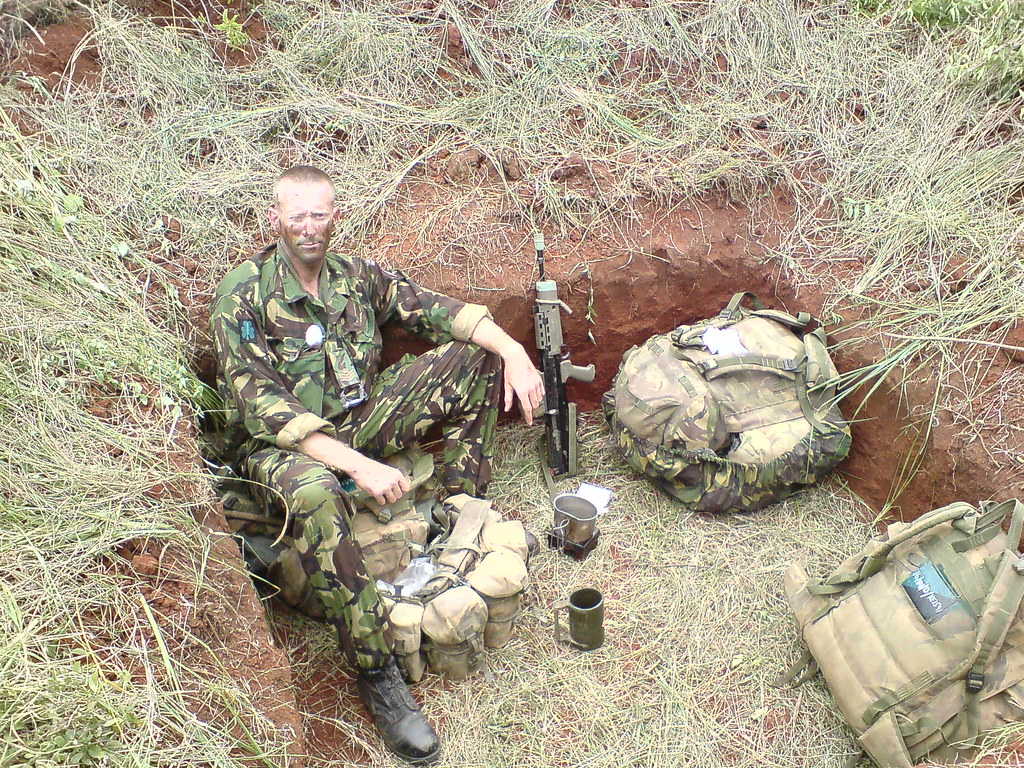 as I say if made right they are comfortable and pretty good in stormy windy weather worth trying to make one for fun in a deserted area next time you go to a beach, if anyone asks say its a big sand castle!

If you do a google search for "soldiers fox holes"
You get all sorts of 'stuff' from 'stand-up' to 'prone' ones.

If you do a google for 'soldiers fox hole' you'll find all sorts of stuff - everything from 'stand-up' to 'prone' 'holes'.

There is a PAM that tells you all about dimensions. Can't recall the number. But anyways, here's how to dig a shell scrape....

1. Get an ETH (Entrenching Tool Hand). It's your basic folding shovel from GoOutdoors or similar.....

2. Mark out your area. Measure 2 foot longer than your tallest occupier. Width wise, you want about 8in in from the edge of your basha. So that the basha overlaps the shell scrape.....

3. De-turf. One ETH blade depth, keeping the soil. Put to one side.

4. Dig your Shell scrape. To a minimum of the hight of the ETH. arrange spoil around three sides of the scrape leaving the rear open.

5. Re-turf. Use your turf to cover the front and side berms that you have made from the spoil.

7. Pimp your scrape... I used to dig a 6 in deeper bit at the front of the shell scrape. Line with thin boughs. This is the most used area during Stand-up and admin. The boughs absorb the muck and wet from you and your kit and affords some thermal barrier during those long stags..... I also liked to dig a little shelf in my side of the scrape for my hexi cooker. Here I could make a brew or scoff etc. I also used to always pitch the basha as an A-frame style over the scrape (keeping it as shallow a pitch as poss....)

The dimensions in the PAM are really only a guideline anyway right.....

This topic brings back memories.
Cant figure out if they are good or bad!
Reactions: santaman2000 and firedfromthecircus

cool thanks for that, I'd love to know what that PAM was!
I like the pictures, it looks realy close to a shellscrape.
the how to guide, brilliant!
the search for the the holy grail that is the shellscrape PAM continues!

This topic brings back memories.
Cant figure out if they are good or bad!
Click to expand...

That sounds about right!

Do you still have your Volunteers handbook? It was written by a officer (not a rupert) from Hull and was the goto book on all things Army. It may still be in there.

I've never seen anything official on it, but now I've seen this I'm going to have to try and find something.

I was always taught that it should be (rule of thumb) wide enough for two with kit, long enough to lie down in, knee deep (so you and your kit are below ground zero) the spoil will not stop anything i.e. small arms fire or shell splinters..

However, experience showed me quickly that it should be smaller than your poncho (or modern shelter sheet) and worth digging shelves or a deep bit at the back for your bergen to go into - this helps keep you dry it you angle the bottom slightly.

Update
I have searched the BAEBB (British Army Electronic Battle Box), TAMs and all of the documents I can think of, I even asked a Para Regt Lt Col (using short words) and a couple of others; no one can think where it is laid down, so I'd say the only official guidelines are.....by word of mouth.
Last edited: May 13, 2019
Reactions: tiger stacker
D

I don’t remember ever sleeping in a shell scrape, I seem to remember they were around the perimeter of the Harbour Area, with 3 slight more forward as Sentry points, during the night.

We only used them during ‘stand to” or if there was an attack.
The Basha was further back and that is where we slept and cooked etc.

But by the time I went to an Infantry unit I was senior enough not to have to dig holes, or even go and play soldiers if it was raining.

As a reference, there is this "instructional video" from the MoD side for NBC. It covers slip trenches but also the effects of radiation.

But it is nice to see the SLR in film though.

You could write to the School of infantry at Warminster, or Caterrick Garrison and asking them politely. Or ask on ARRSE Army Rumour Service. Are there any TA centres close to you? You could pop in and ask a PSI. It must be written down somewhere in Mat Regs, Pamphlet whatever. Everything is written down for the forces. I know there is a Pam relating to the construction of defensive trenches using wriggy tin and 6foot pickets. As you mention the important point is to ensure your side walls are inside the basha so that any rain runs off outside the shell scrape. Hard core photo, jungle boots, rolled up sleeves and a greeny mortar tube mug.

still serving, I have these on the digital battle box.

PM me and I'll ping you dimensions etc...

Hmmm ... Just thinking on screen. We used to dig small trenches like that when checking the small rodent population. It also collects anything that crawls, slithers, slides, errr what does a frog do?

It does give some protection from too fast objects, wind and lessens one's IR signature to horizontal.

There is something published which includes the use of the old ipk…. the colour man in your pics looks too clean to have dug his home from home….

One fact you can truthfully tell is, the best way to stop your buddy from snoring is the traditional shaken awake…..in my case my full screw used his fist, it was stanta with those F15 making enough noise already…..

Hi Rapp. I think the pam you may be looking for was from the series 'Field engineering and mine warfare'. This was sponsored by Royal Engineers and was on a limited scalng to Infantry units.
Basic size 6 x 2. one spade deep with one foot of turf laid front and back. Firing parapet 9 inches(bayonet length) with filled sandbag. Battle trench stage 2 was a progression of stage 1 shell scrape
Reactions: Madriverrob

I'd be interested to see where this was (I couldn't find it anywhere). Have you got the link?


Mandos said:
still serving, I have these on the digital battle box.
Click to expand...

Look for this on Google.. Its got everything you need to know about 'Digging'
You must log in or register to reply here.

Questions about the Savotta Border Patrol