No Bishop, they burn up batteries like no tommorrow.

Also they used to be quite safe, but now the fashions changed to overpowered ones with faulty crystals, and I forsee a lot of lost hands in the future.

I bought a Bahco laplander when I first started out. It's pretty good, I've yet to break it, but it doesn't cut as well as it did when new. I hadn't realised how the cutting performance was tailing off until I used Gardena 14" bow saw. The two just don't compare in terms of performance.

I keep eyeing up a Silky folding saw, but I can't currently justify the cost when I have a laplander that serves the same niche.

A friend of mine just bought a silky Katana boy 650. That thing is one serious piece of kit. I'm pretty sure from a street clothes, to tree on the floor, that thing will be faster than a chainsaw for felling a single tree of about 10"... I hope to test this theory soon... I'm not sure I could justify the cost when it comes to carrying one on bushcraft trips.

That boreal21 saw looks very pretty, one of those has gone on the shopping list, looks like it would be ideal for use for feeding a heated tent. Tho I'll carry a laplander as a backup. Are they available in the UK yet?

I made a simple sheath for my laplander from leather, it's nothing fancy, but it works: 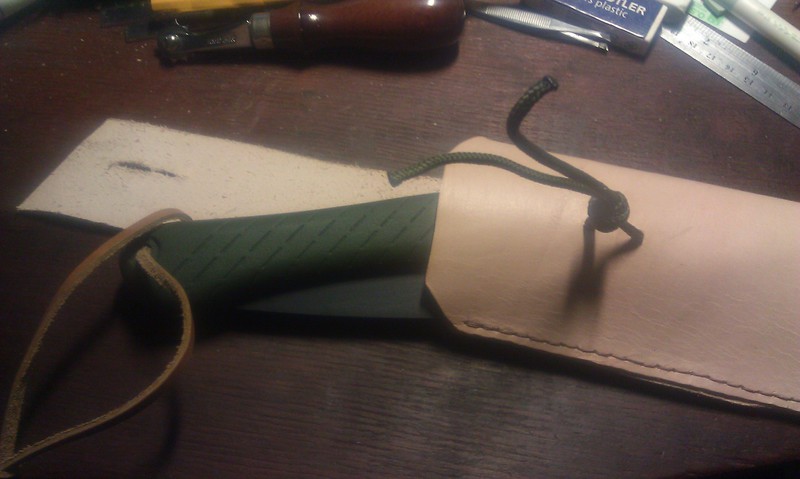 The pattern is available under creative commons (assuming I can find what I did with the file).

While we're all looking at the big saws, don't forget you don't need anything massive for most of what we're doing. [thread=137561]Cooking fires don't need to be huge[/thread], meaning you can use [thread=126429]cheap, small saws[/thread]. Sure such saw won't equal a silky in performance, but it's so small and light it'll fit in your shirt pocket. In my search for a saw/knife that I could carry on the Eurostar, I ended up with a Leatherman Juice CS4, it punches well above it's weight. I've cut wrist size logs with it, which are more than big enough for cooking fires. 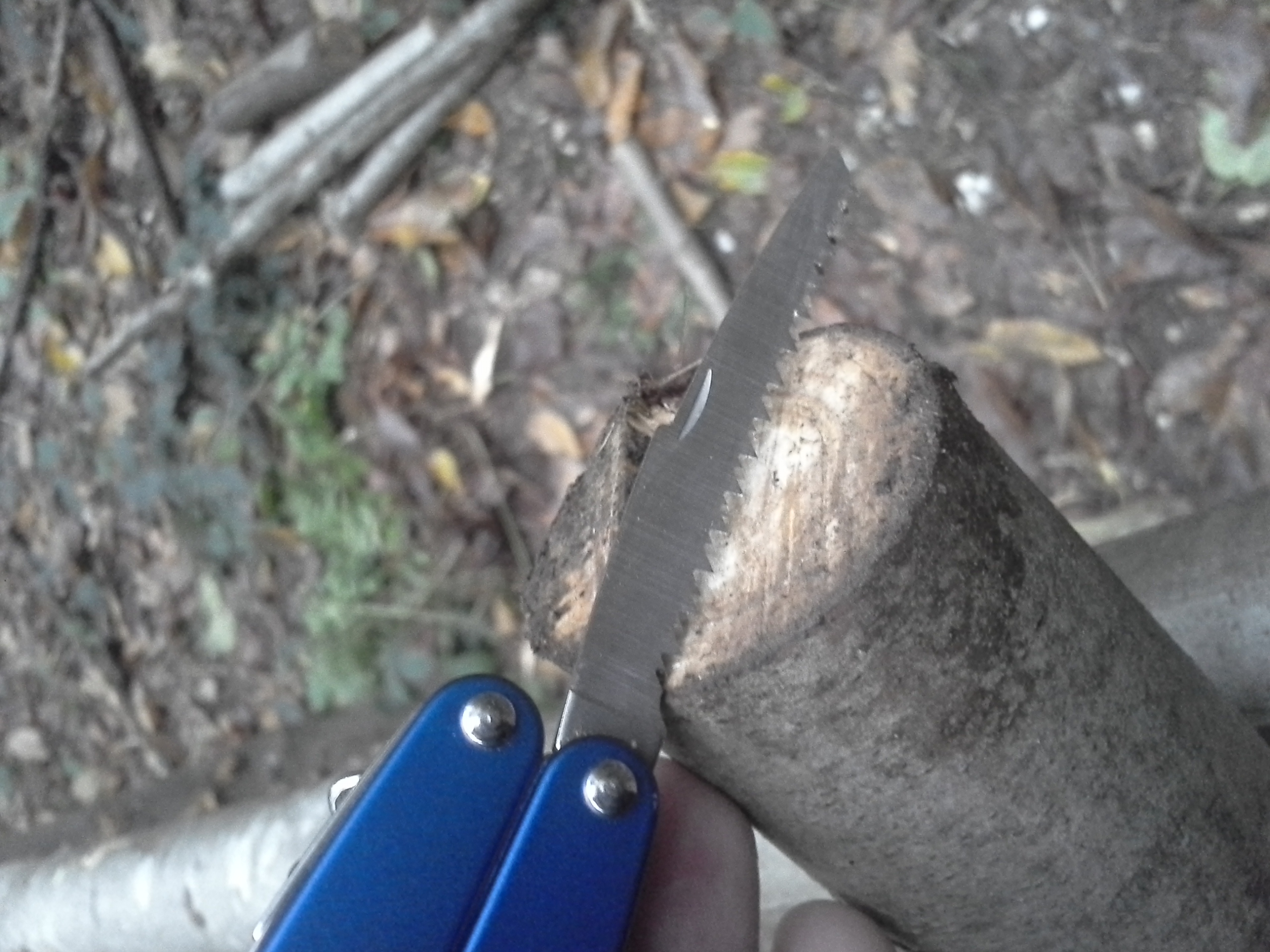 What are the two Silkys in the centre of the shot?

GreenNomad said:
I'm interested in getting the Bahco Laplander Folding Saw, at £21.95 its not bad, but the sheath from TBS is £23 !!
Click to expand...

I'm not sure you need a sheath. I know they look kinda cool, and a lot of leathersmiths make and sell them. I rarely see anyone actually wear one though. People seem to do the same as I do - shove the saw in a pocket or bag until you need it!


Sent from my E2003 using Tapatalk

Dark Horse Dave said:
I'm not sure you need a sheath. I know they look kinda cool, and a lot of leathersmiths make and sell them. I rarely see anyone actually wear one though. People seem to do the same as I do - shove the saw in a pocket or bag until you need it!

I suppose I anticipated taking a small selection of tools attached to my belt for what ever specific task was to be performed, giving quick accessibility but I could imagine too much strapped to your waist would be a hindrance and expensive!
Last edited: May 9, 2016

Quixoticgeek said:
I bought a Bahco laplander when I first started out. It's pretty good, I've yet to break it, but it doesn't cut as well as it did when new. I hadn't realised how the cutting performance was tailing off until I used Gardena 14" bow saw. The two just don't compare in terms of performance.

Others will be able to tell you if you can resharpen a Laplander blade, but if not you can always buy a replacement from the Woodlore shop (I think they're about 12 quid or so).
Last edited: May 9, 2016
M

Thats a Pocket Boy 170 and Gomboy 270. Go as big as you can as the rule of thumb is they cut best 1/3 size of the blade length (sure they do bigger but... In truth how big a trunk are you going to tackle and move?)
The trick is straight pull strokes and straight resetting. Its the pushing to reset that everyone gets wrong as they do it too fast and with force. No force required and straight and loose set it faster than fast and useless! It not sawing but pulling and resetting, pulling and resetting.
Long blades are good but being longer they take more time and precision to reset, but then on the pull cut deeper.

Pulling is no effort, use body weight, and resetting even less effort. If the wood pinches then you cut or set up wrong.. undercut a wedge first.

Again if you get yourself in a sweat then you are doing it wrong. The challenge is: "how effortless you can do it"; cack position is your fault.
Last edited: May 9, 2016

Good tips there Muskett - thanks a lot

Sent from my E2003 using Tapatalk

Fiskars pruning saws are also good. I was trying to sell them recently, but just ended up keeping and using them in the garden. The blade is so strong and sharp, it cuts hardwood branches like the moras cut papers. I tried to feel its tooth how sharp they are, but ended up cutting my fingers badly bleeding I had to put band aide on. Scary stuff.

Btw they are not exactly folding saws, but the blades slide out or in from hollow plastic handle, and gets secured and locked by large thum wheel screw.
Last edited: May 16, 2016
T

What about the new Gerber Camp Saw - http://www.gerbergear.co.uk/Outdoor/Tools/Freescape-Camp-Saw_31-002820

Folds down nice and small and the blade is protected to tuck this in your rucksack. Blade is replaceable very easily as well.

I want to buy a bahco laplander , except ebay can you tell me where can I find one where I can pay with paypal ?

Amazon usually has them.

SoldierPalmer said:
Amazon usually has them.
Click to expand...

but they don't accept paypal

Gcckoka said:
but they don't accept paypal
Click to expand...

Open a Amazon account and pay with a credit or debit card.. easy

Big G said:
Open a Amazon account and pay with a credit or debit card.. easy
Click to expand...

I have some funds on paypal , I have enough left for a bahco saw , if I withdraw it I will have to pay a fee and than it won't be enough , I am searching for a place to pay with paypal

All showing as paypal, and having bahco laplanders. I also find several sellers on ebay.

J
You must log in or register to reply here.

S
My first self forged knife

Giving myself 3months to find a vintage equivalent or I'm buying a GB axe!