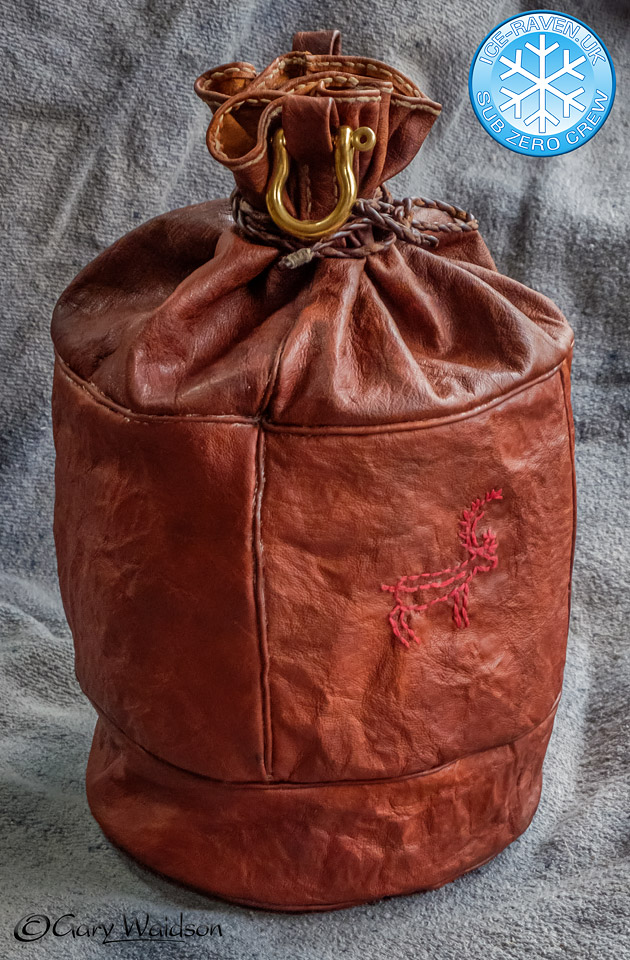 I was once told that real craftsmanship is invisible. That might seem counter intuitive but what he meant was that most people that see it would never be aware of the work that went into making it, they should simply admire the object itself.

I get that and though I tend to look at things with a craftsman's eye even I can often underestimate a seemingly simple object.

Continuing the theme of using up my supply of scrap reindeer hide, I decided to use a mixture of off cuts including part of a back section that was badly fly bitten to make a small ditty bag.

There is an unpleasant species of warble fly that lays eggs on the reindeer and the maggots emerge later from the skin usually along the back leaving holes in the hide. The leather round the flanks is usually still good though and the worst affected hides are cheaper to buy but the backs are usually only useful for thronging. 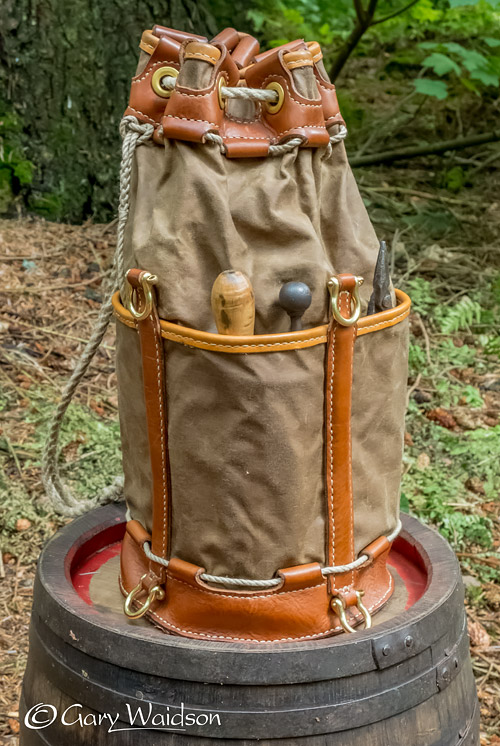 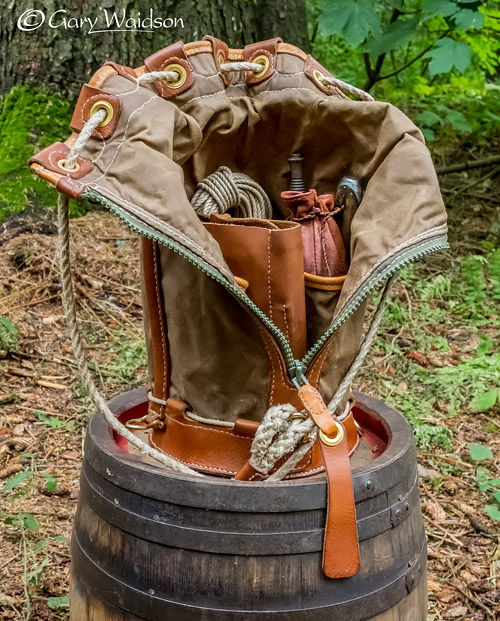 In this case I wanted to adapt a design I had used on the Ditty Bag I made a couple of years back which has a flexible dividing system in it which I find very useful. 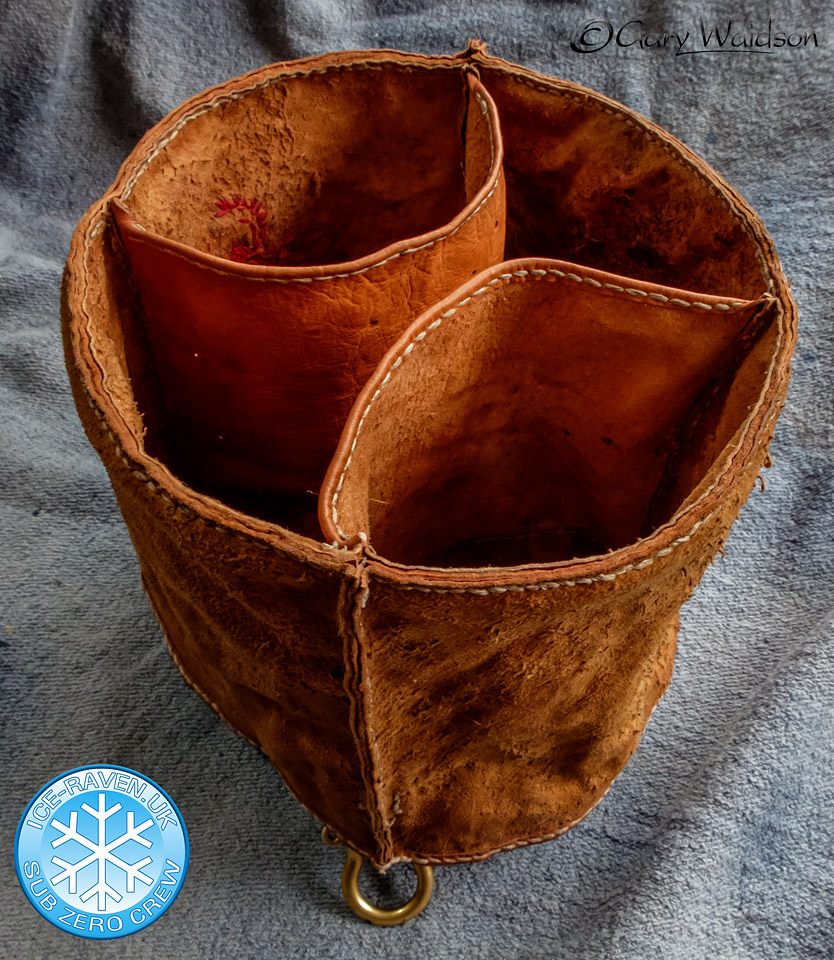 The inner dividers here are made with the scabby back leather but the holes do not affect their purpose or appearance tucked away as they are inside the bag.

However, sometimes you get an idea into your head and think "I haven't seen that done before."

In this case the idea was to use the edges of the dividers to provide the piping between the panels. A combining of the decoration with the attachment. Neat, efficient and simple I thought...

In reality it became one of those jobs that an extra set of fingers would have been very useful for.

Three pieces of leather, one folded over to make the piping, all needing precise alignment while piercing with an awl for the saddle stitching. Not really in a position that is clamp-able, although I never normally use a pony anyway, and the way the layers are laid out means that you can only ever see two edges at a time. Other leather workers will have some idea of how challenging that was.

I have made some tricky items over the years but this was, quite surprisingly, the most complex construction I can remember.

I suspect that may be why I've never seen it done this way before.

I think I must have use just about every technique I have learned over thirty odd years working with leather and possibly invented a couple of new tricks in the process. 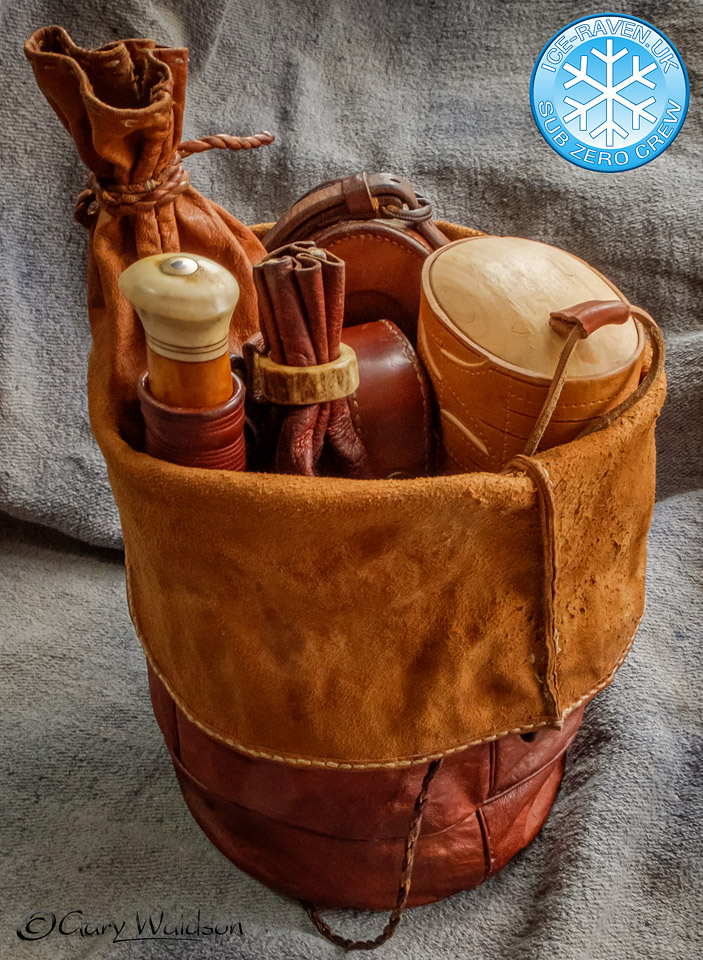 Never the less, I'm pleased with the end result. Most people looking at the bag would never see or understand the work that went into making it, which is just as it should be and therefore matches the description in the first line.

The divider system is based upon the layout of a re-usable shopping bag I noticed. It had simple bottle holders that could be used or just folded out of the way so that the full compartment was still available.

Someone asked me recently why I've taken to naming so many of my pieces of craftwork? The simple answer is that I've now got so many items that I've made that it is becoming more difficult to identify them in planning lists

I used to be able to just say the big one or the little one. Then came the long one and the wide one. Some items could be identified by materials or colours. Others I could identify by where they were made but even that soon started to blur.

It might seem like a strange problem to have, an embarrassment of riches as it were but naming them has become the latest way to categorise the collection.

In many ways it is a firming up of the relationship you often develop with an object when you make it. The longer you work on something the closer that relationship generally becomes.

While making this I started thinking about the all reindeer that went into it's production.

I counted leather from at least six different hides. A sledge team that even Santa would be proud of. The addition of another with the embroidered symbol makes seven I suppose but it seemed right to commemorate them somehow.

"Boazu" is the simplest word the Sámi have for reindeer. There are about 200 other terms from what I gather but the alliterative nature of the word combined with "Bag" seemed a good fit in my mind, so there you have it. "Boazu Bag". Short, distinct but quite fitting. 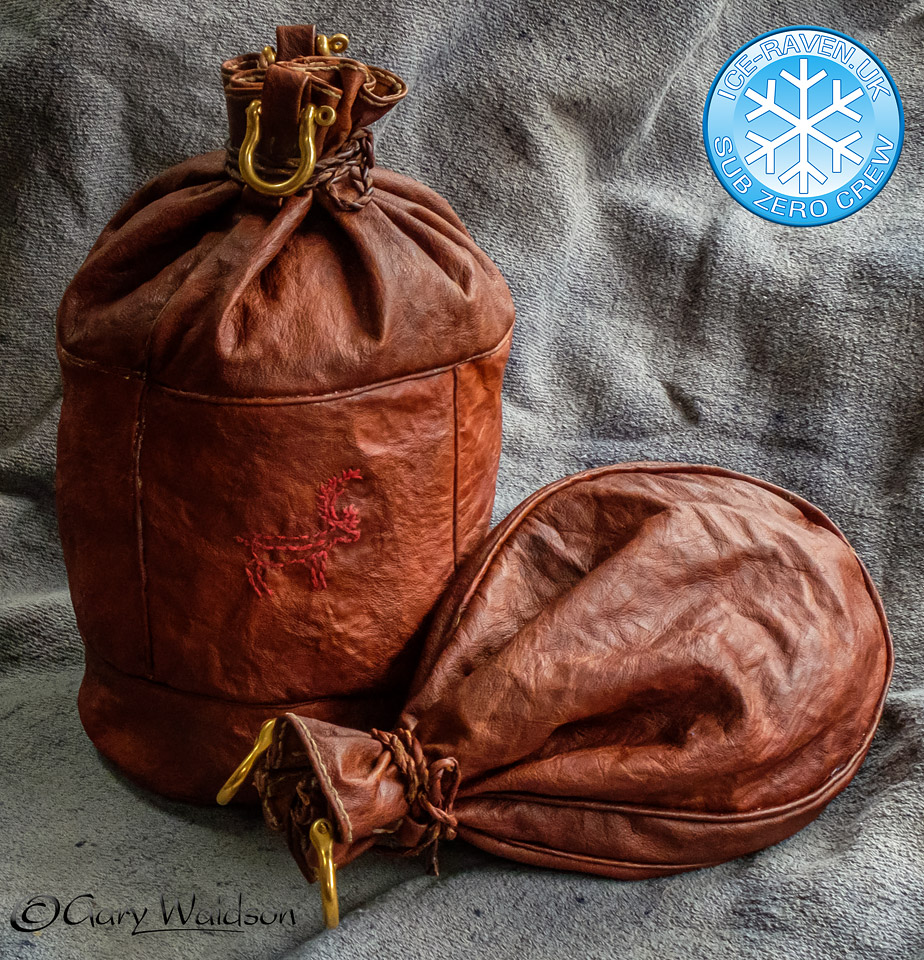 The brass shackles are for hanging the bag on a line to keep it up out of the snow on camp. This makes a nice pair with the Boreal Bag I made last week for the Kittilä trip next year.
Last edited: Jul 20, 2020
Reactions: LarryBass, adriatikfan, Toddy and 12 others

Tremendous work Gary, thanks for showing us.
Reactions: Wayland

Lovely work, much appreciated by me as a very amateur leather worker. As has been said in this forum before, too often people dont appreciate the sheer amount of work that goes into handicrafts. How anyone, in any area of handicraft, could make any money out of it I have no idea. I’m also a big believer in making a decoration out of a necessity in handicrafts. For example, if I need to drill a through hole In a handle piece for a long tanged blade, I will make sure that the piece that shows is very well finished, or covered by something beautiful. I haven’t tried any piped seams yet though . I’m currently struggling with the sewing of box stitches in thick leather in a piece for my wife’s 3rd anniversary present (its the ‘leather’ one, see ).
Reactions: Wayland

Dogoak said:
Tremendous work Gary, thanks for showing us.
Click to expand...

You are welcome and thank you for replying.

bobnewboy said:
Lovely work, much appreciated by me as a very amateur leather worker. As has been said in this forum before, too often people dont appreciate the sheer amount of work that goes into handicrafts. How anyone, in any area of handicraft, could make any money out of it I have no idea. I’m also a big believer in making a decoration out of a necessity in handicrafts. For example, if I need to drill a through hole In a handle piece for a long tanged blade, I will make sure that the piece that shows is very well finished, or covered by something beautiful. I haven’t tried any piped seams yet though . I’m currently struggling with the sewing of box stitches in thick leather in a piece for my wife’s 3rd anniversary present (its the ‘leather’ one, see ).
Click to expand...

I came across one of my first pieces of leatherwork not long ago. It wasn't much and I would do it very differently today but I liked it then and it is still serviceable today.

Leather working started as a necessity for me. I needed things but couldn't afford them so I had to make them. I learned in the process, stitch by stitch, and I'm still learning today. I have never done it professionally so I am still an amateur but the original definition of that is someone that loves doing something. I can't argue with that.

I have an obsessive streak. I always want to make things "perfect" and though I rarely achieve that, it does usually drive the quality towards the upper edges of my skills.

Very smart and very useful - I can see that it could have been a bit of a job to make though!

Not beyond your skills though John if you put your mind to it.

Lovely work as ever.

crosslandkelly said:
Lovely work as ever.
Click to expand... 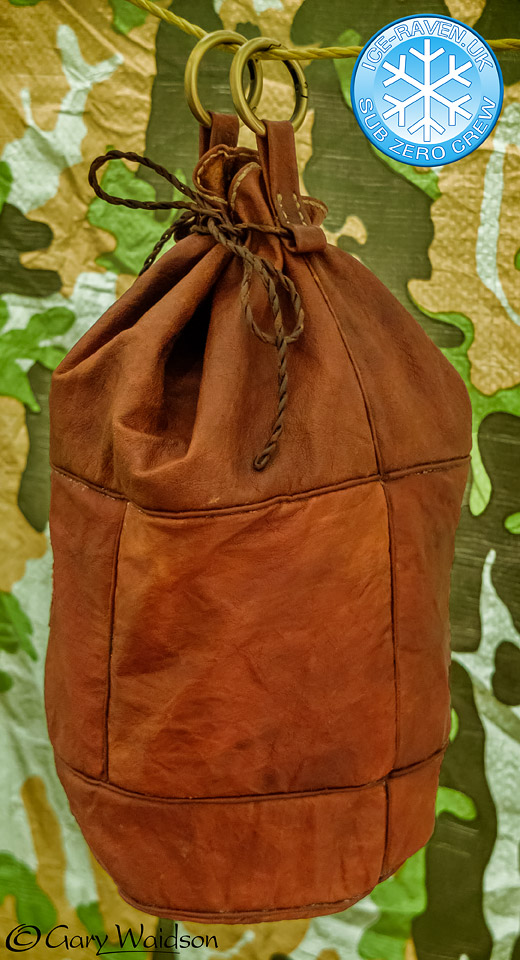 Had a kit test camp last weekend so here is the bag in situ.

Decided to use some snap rings for convenience.

( Only just spotted these replies.)
T

kendal cumbria edge of the lakedistrict

Hello, i have only just seen this, not been on the forums for a while. I real'y like the boreal bag the colour is nice and it looks nice and soft. Can i ask where you get your brass shackles from. This is some good work.
Regards Chris.

The brass shackles came from China via eBay.

They take some time to arrive but the quality seems OK.

Is it just me or have the pictures disappeared?

MikeE said:
Is it just me or have the pictures disappeared?
Click to expand...

Pictures have gone for me too. Noticed this a week or so ago.every single picture gone throughout the thread.

Fine for me (and very nice!) on iPhone and the other half’s iPad.

OK on my iPad too???
You must log in or register to reply here.

Made a camp chair stand