As a lot of you know, we are luck enough to know a wonderful woman who raises rare breed pigs in woodland to an incredible standard. When we tried her pork, we knew we had to make bacon with it, which led on to our bacon making YouTube series


But you know me, ever curious

So I'm trying some new cures & experiments with rind etc. I pretty much had to make some maple cured back bacon which I've chosen to cinnamon spice. It smells great in the cure 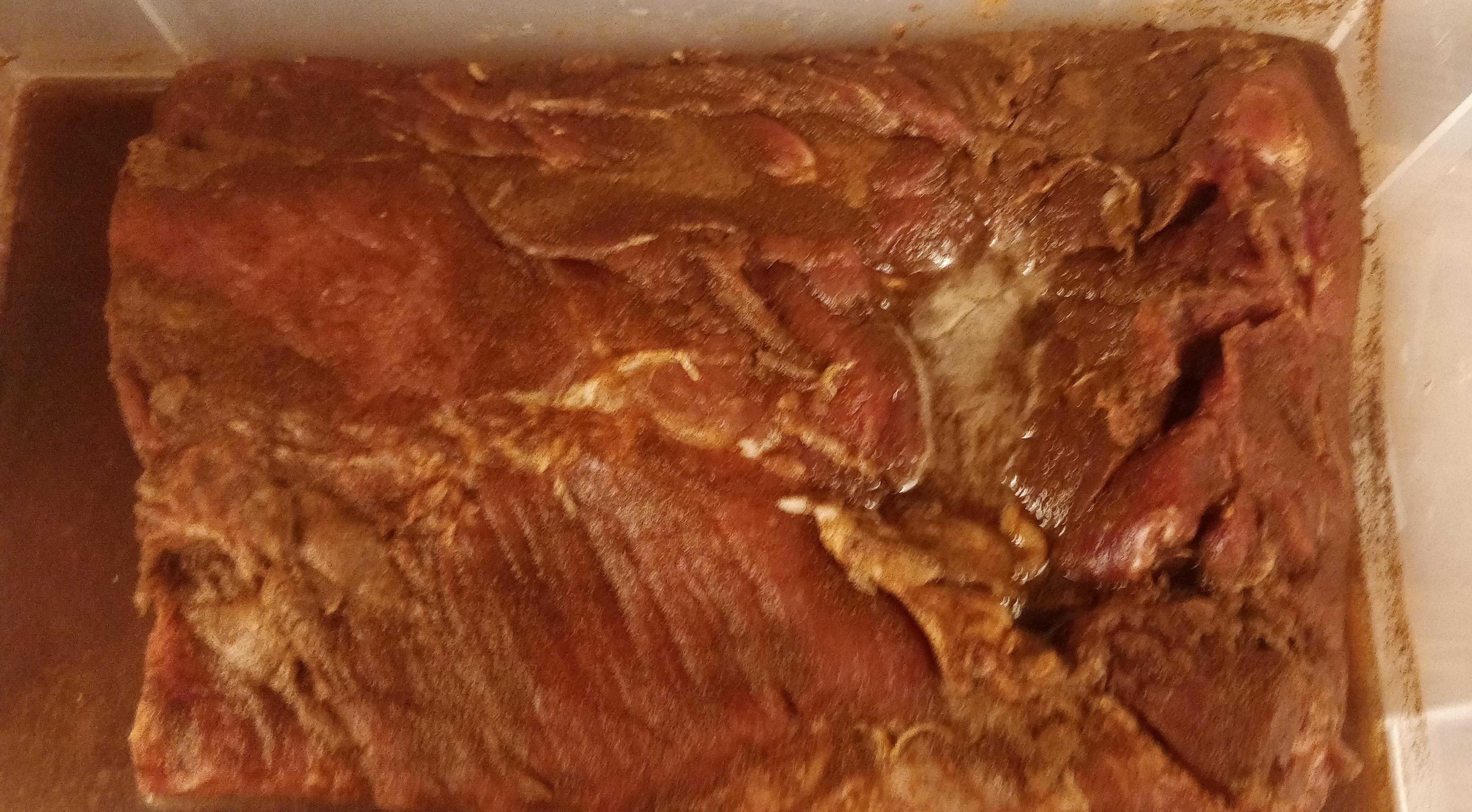 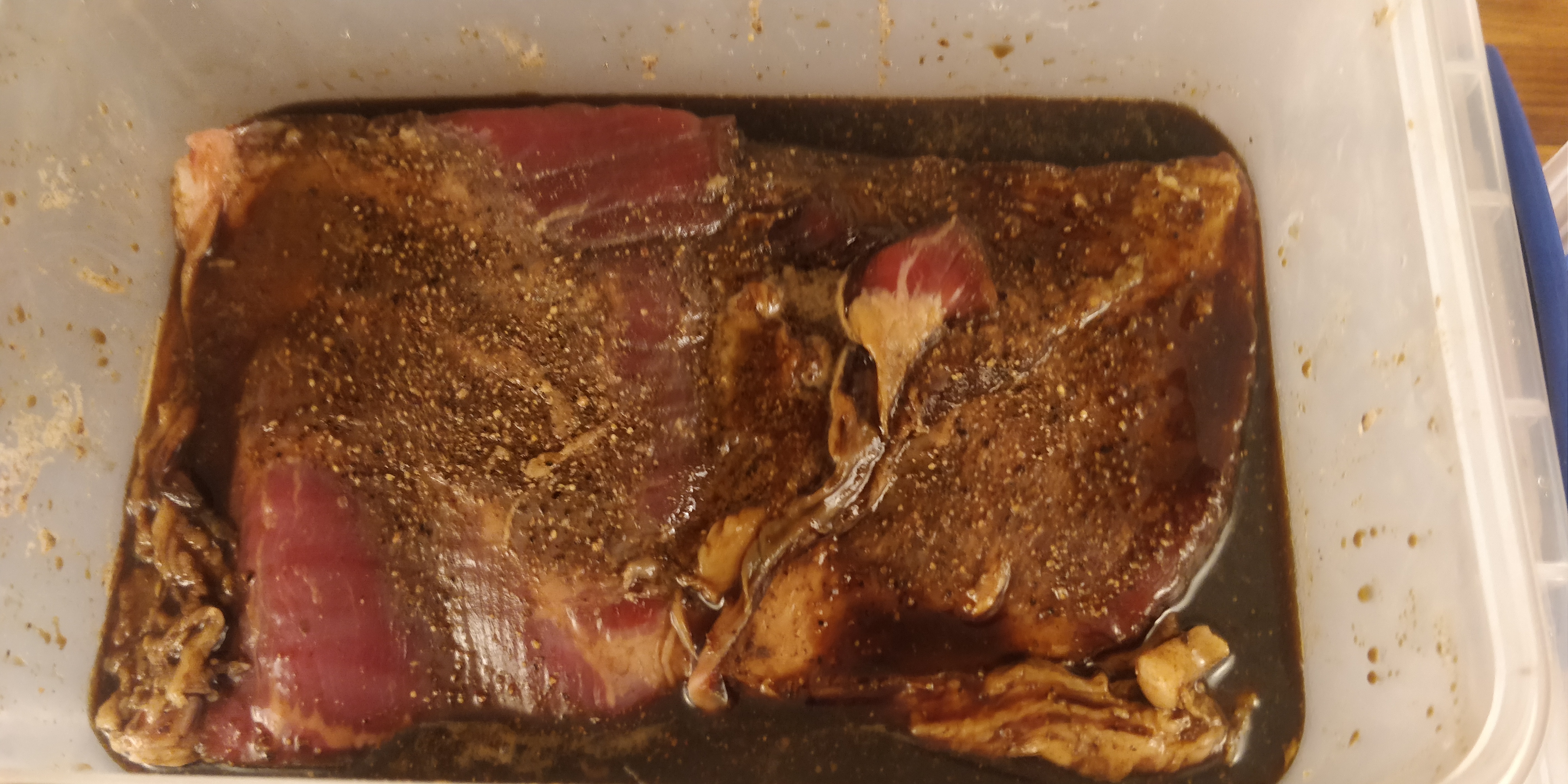 Now , after curing and rinsing this would traditionally be hung to dry age fir a week then smoked up the chimbley


My concern is that smoking will overwhelm the treacle flavour. What do think? I have two pieces (one rind on, one rindless). Should I smoke both? Neither? One? Which one?

What do you think?
Reactions: CLEM
J

I would smoke the piece with the rind. The smoke flavour will not penetrate as deep, the rind protects a bit.

What wood will you use?

Edit: I guess it depends on the use.
If I wanted to be able to slice the bacon thinly and then eat on bread, with pickles on the side, I would use the rindless and hoy smoke it.

To slice and fry in a pan, with rind and cold smoke.

I will certainly cold smoke, I have a big oil drum smoker that I made


Wood wise I usually use oak since its native & I have a ready supply of it
Reactions: Janne

Since you have two I’d be more likely to each one a different way just to be able to sample the difference.
J

I would salt and saltpeter cure one.

santaman2000 said:
Since you have two I’d be more likely to each one a different way just to be able to sample the difference.
Click to expand...

I may well do that!

Janne said:
I would salt and saltpeter cure one.
Click to expand...

Oh I have plenty of other cures going on , including a salt & pepper cure and a maple cure

A dab of horseradish/apple to add a bit of Adult flavor is not wrong either!

I'd use apple wood for taste. A little smoke for a long time to get the penetration.
Mesquite might be OK as would any other junk fruitwoods (pear/plum/apricot/peach).
I want to see the bacon fat just about yellow from smoke.

1/4" slice with rind to fry. The rind skin gives me something to chew on, all day long.

I always do a big apple wood smoke for the first hour in my BBQ. I'm convinced that some of that evaporates
during the rest of the cooking time (2-4 hours) at 275F.

There's a guy in this village that makes prociutto and panchetta. I've tried for years to get on his list.
Always "too late for this year". I need somebody else to do it for me to buy.
Reactions: British Red
B

Hey Red, i've done the cure with black treacle and i'd definitely go with smoked, rind on always. The unsmoked was delicious, but cold smoking it over maple took it to another level. I also added some cayenne to the cure.............Wow!

PS, why is this on the Sub zero area???
Reactions: British Red

For bacon I prefer old smoked with hickory then fried. I rarely get rind on bacon anymore but when I do I cut it off and fry narrow strips of it alone for cracklins. (Those are great in “cracklin bread.”

All that said, any good hardwood should work fine and I suspect Red’s choice of Oak is the more traditional in the UK.

A nice wood to use in the smoker is Juniper branches.

In fact, across Europe, I think most woods are used. Maybe not Yew though, unless the meat is a gift to Mother-in-law??

British Red, if you want to get a deeper, more pronounced smoke flavor, use Smoke Acid. You might find it easiest under the name liquid Smoke. A few drops in the marinade is enough!
Reactions: British Red

Red, I salivate at the prospect of your final results! More power to your elbow and keep inspiring this tenderfoot.
Reactions: British Red

Pine will make it taste like tar.
Reactions: British Red

Smoked maple cured bacon is my all time favourite. I've no idea how it's done , maple syrup in the cure perhaps?
Reactions: British Red and santaman2000

I do a butterflied leg of lamb. Deboned and on the grill. No smoe and a fairly fast cook to medium rare.
The marinade is OK for a soak ( maple syrup, Canadian rye whiskey, etc)
but with a marinade syringe, shoot the meat full of it = dramatic improvement.
Reactions: British Red

Woody girl said:
Smoked maple cured bacon is my all time favourite. I've no idea how it's done , maple syrup in the cure perhaps?
Click to expand...