Opening the post can often be an interesting experience in our household. We have a wide range of interests and we have both embraced the concept of online shopping with enthusiasm.

The post on this particular day was a complete surprise though. A parcel I was not expecting at all stimulates the usual thought, “What have I ordered that has not yet arrived.” Nothing that I could think of and certainly nothing of that size.

There was not name on the package and the label was hand written. Curious... 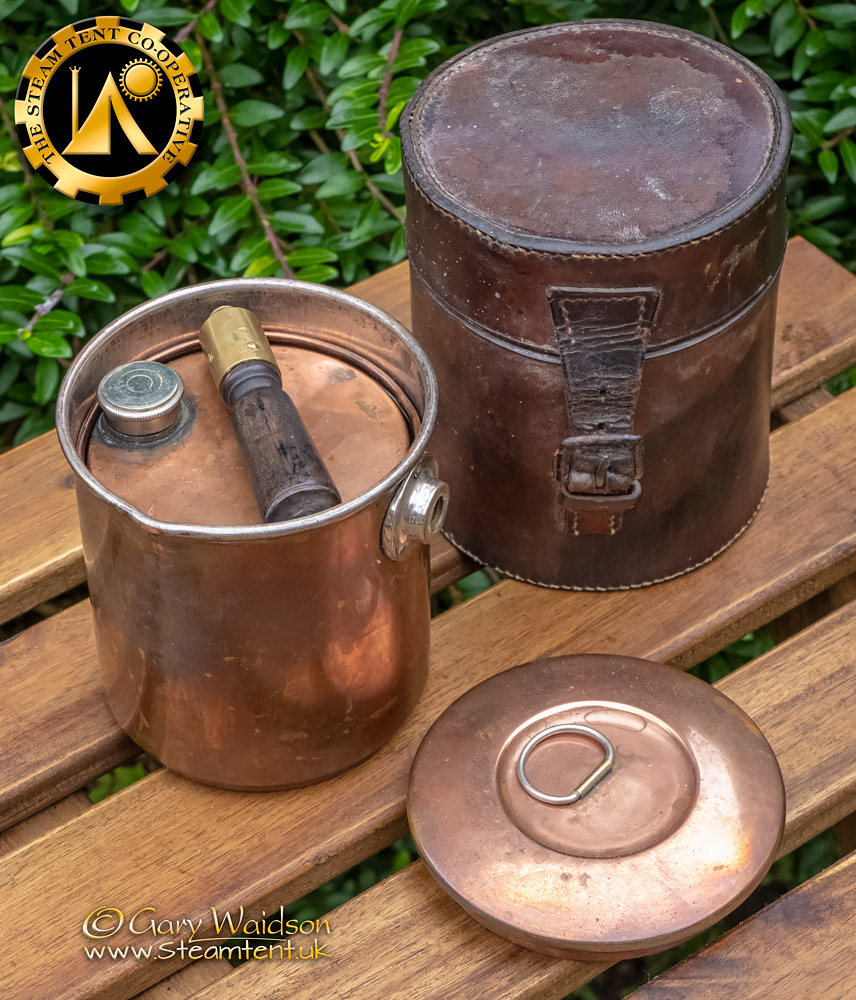 What emerged from the packing was a sturdy leather case, a little worse for wear, and in the case a neat copper pot filled with goodies.

At this point I remembered a message from EdS of this parish a some time ago:

“If you send me your address I've a little something, I'm not using, that would go nicely in the steam tent. Requires a bit of solder / Brasso.”

I remembered instantly where I had seen this stove before, a post on this forum eleven years ago.

I had admired it greatly then and in the flesh I admired it even more. To say that I was gobsmacked would be an understatement. 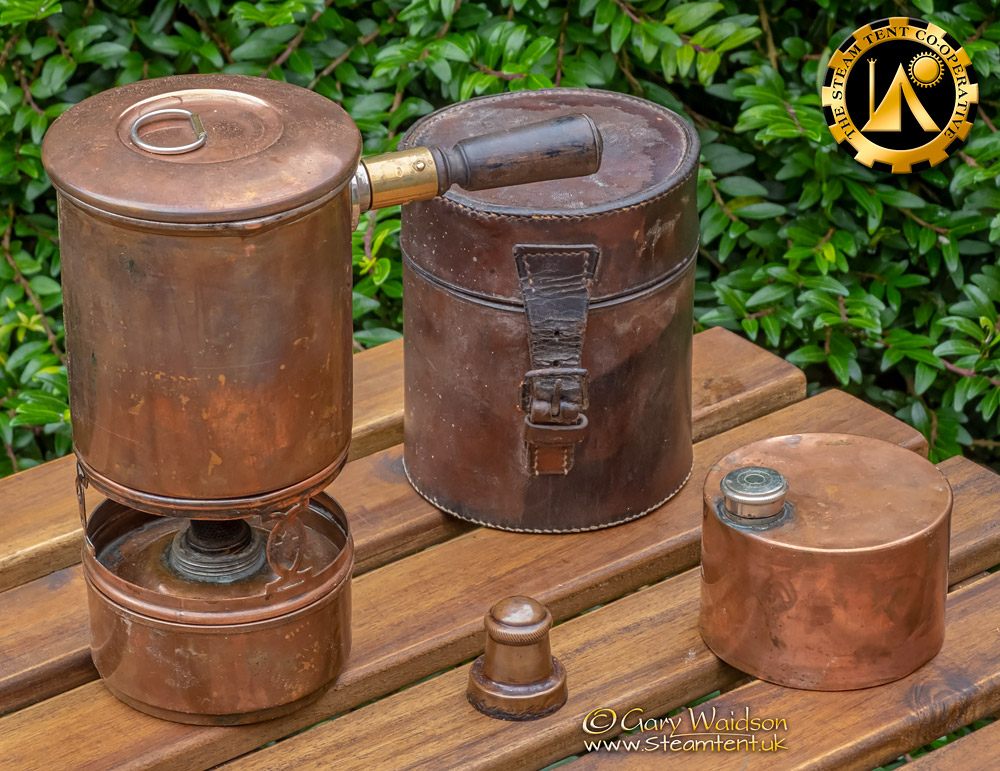 What we have here is a spirit stove made for A. Barrett & Sons in London, sometime between 1878 & 1910. We can date the stove because A. Barrett & Sons only traded at 63-64 Piccadilly between those years and that is the address in the leather case.

There is a spare fuel bottle which sits on top of the burner when packed.

This sort of stove is typical of the type that an army officer might have used to boil water for drinking, and possibly to cook small quantities of food on campaign. The dates would suggest either of the two Boer Wars, 1880-1881 or 1899-1902, between the British Empire and the Dutch in South Africa. 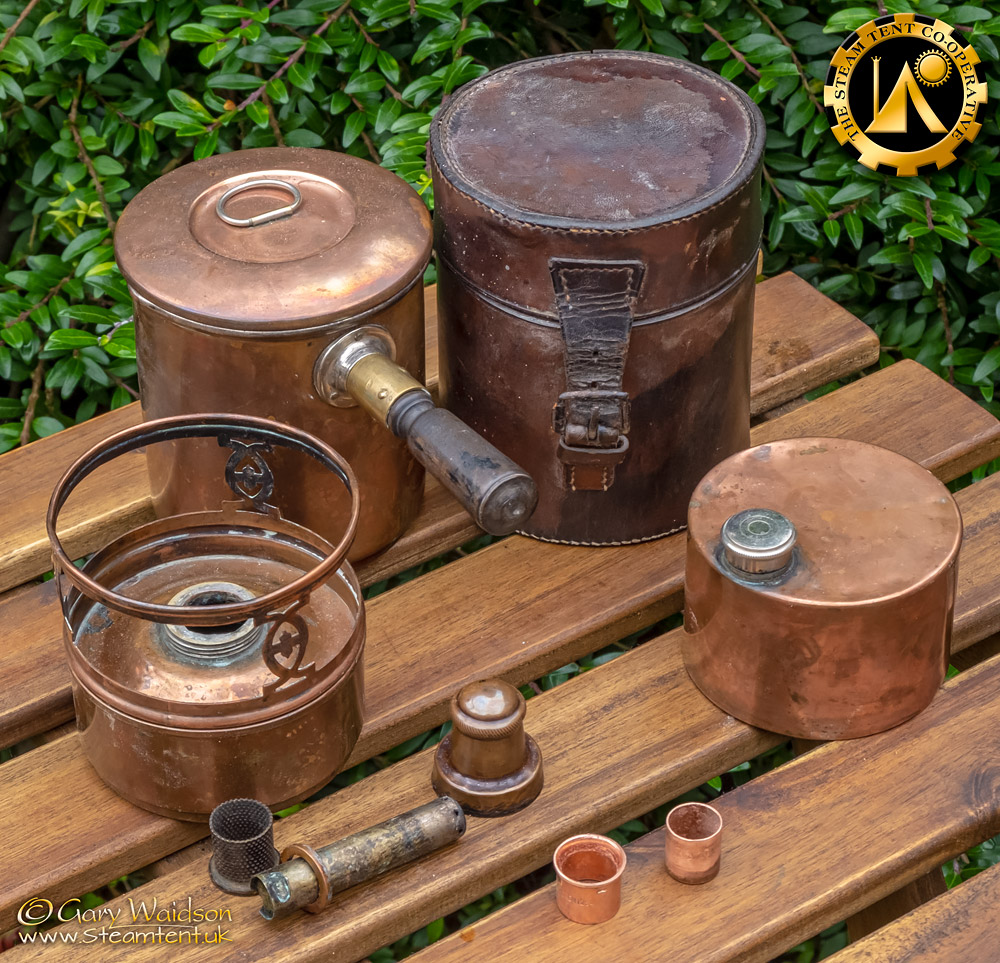 It seems to be in good order but for the lack of a tubular wick which should surround the central wick tube and the seals that needed replacement.

A browse of some wick suppliers and then a call to a manufacturer yielded no leads or supplies so it came to the old standby, improvise and overcome.

Ed had been using a Landrover sump plug washer to hold the burner gauze but I adapted an old pipe fitting to improve to stability a bit.

Wrapping a piece of cotton sheeting tightly around the tube and then slipping the fitting and gauze over to hold it in place seems to produce quite a serviceable wick. Easy to replace in the future as well if needed. 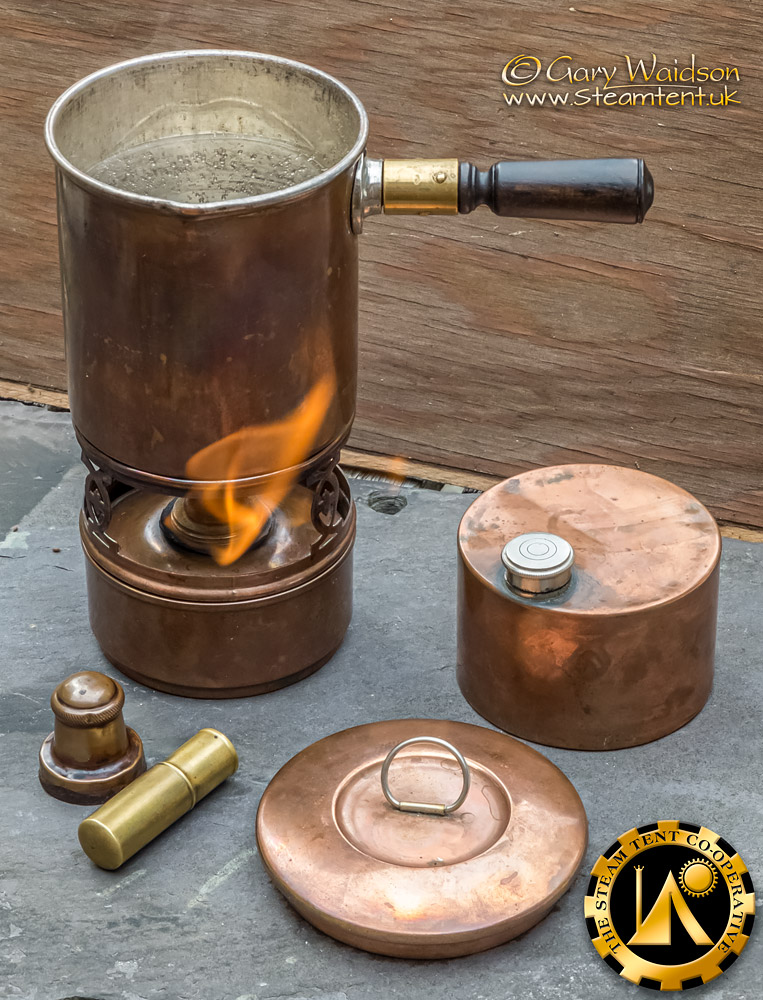 Stove now working nicely, it is time to look at restoring the case which will be a much bigger challenge.

I considered starting with a fresh piece of leather to replace the hinge and the fastening strap but looking at the job carefully I think that would damage the integrity of it too much for my liking. What I need is some older leather of a similar colour. Looking through my scrap store I found a piece that was a reasonable match and turned my attention to the case construction. I would have to partly dismantle the case to get to the stitching that needed to be replaced.

For something that was over a hundred years old, that had potentially been knocking around a couple of war zones, the leather and the stitching seemed to be in remarkably good condition.

As I gently took it apart, a small quantity of fine sand sifted out of the cracks. I bet that could have told a story in the right hands. The inner sleeve was very dry, almost like cardboard, and showed some staining which made me think there had been some leakage of spirit at some point, never good for leather. The outer case was sound. I glued down parts of the lining that seemed a bit loose and then gently worked some grease into the dried out leather, looking carefully for any clues as to how it had all been originally put together. 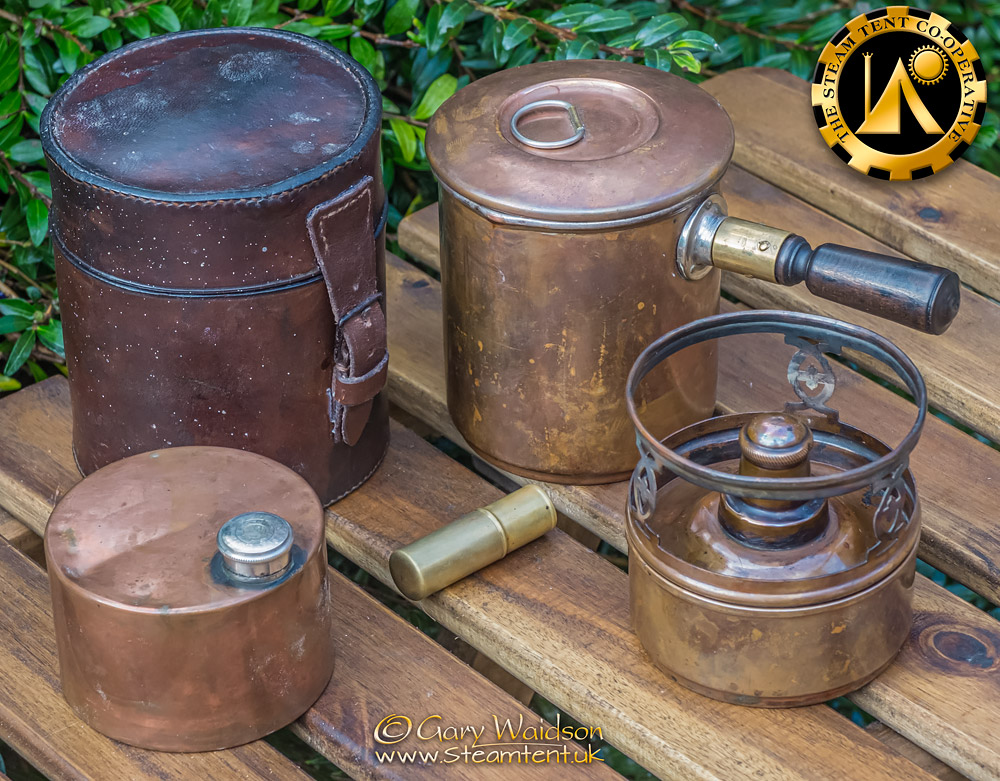 Restoration work is somewhat different to other forms of craft work. If you can see the work done then it might be said that it has not been done as well as it could be.

I have posted the finished leather work above first and the pictures below show the parts that have been replaced.

The original case showed a combination of hand and machine stitching. using a machine to replace such stitching rarely produces a satisfactory result and often damages more than it restores. Hand stitching by it’s very nature looks different but at least allows you to reuse the original holes in the leather, thus reducing any damage.

It’s not perfect but I am quite pleased with the end result. 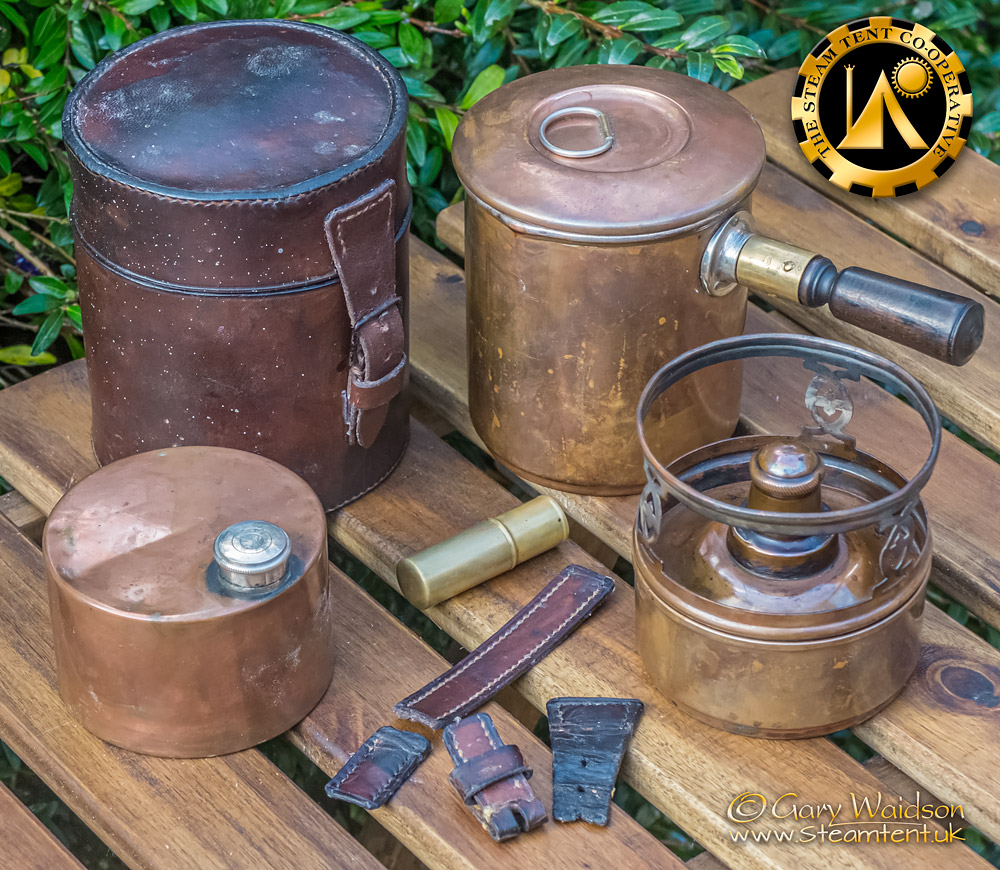 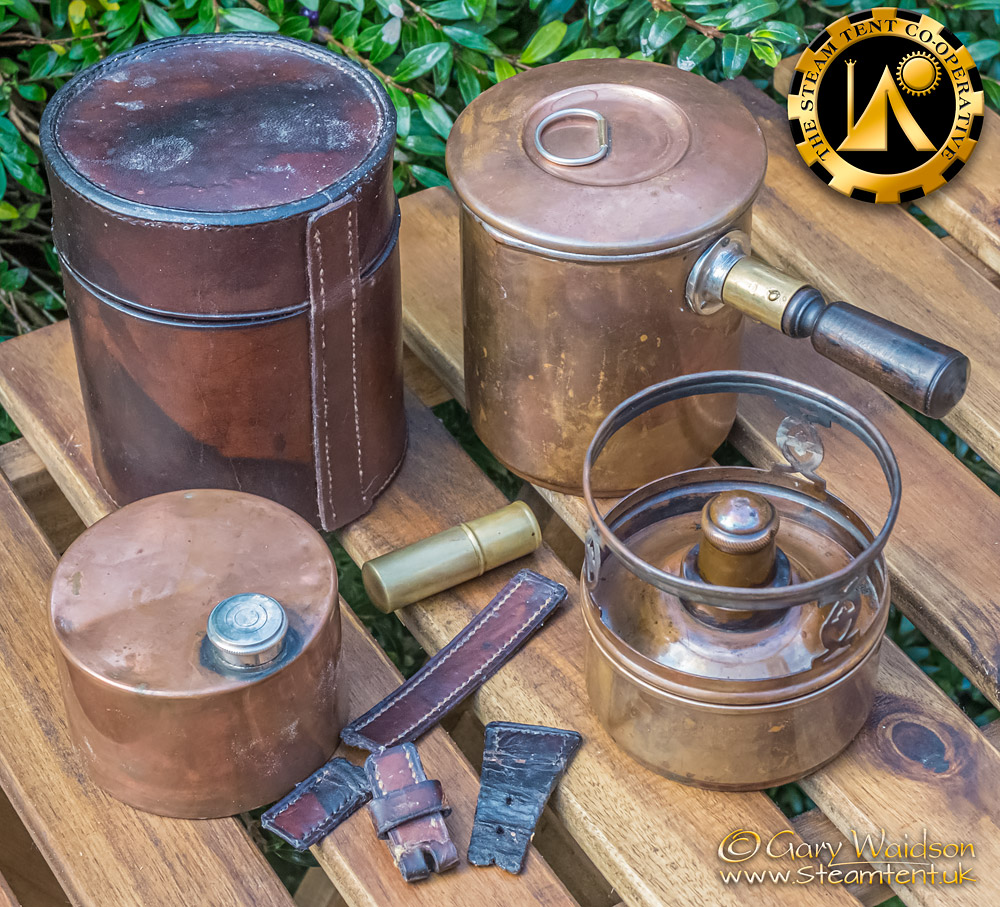 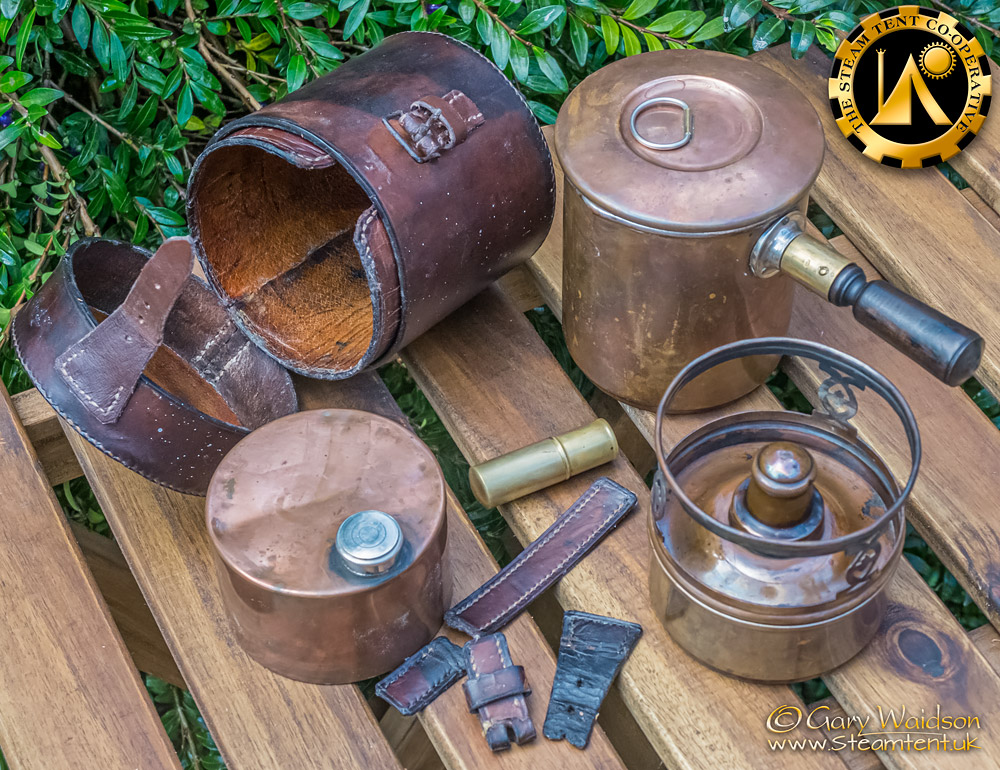 I did decide to make a small modification to the case which changes it’s authenticity slightly.

It was clear to see that the bush on the side of the pot which the handle screws into was the reason that the original case hinge and fastening strap had failed. The distortion caused by forcing the bush onto the round case added pressure onto both and making a repair without addressing this design fault would be doomed to failure.

Cutting a slot into the lining of the case, made good with stitching of course, allows the bush to slide in much more easily, reducing the strain considerably. My hope is that it looks in keeping with a modification made in period.

A pause now while I decide how much cosmetic work to do on the surface of the leather. The stains all add to the character but it appears to have been spattered with white paint at some later point in it’s life which I feel does detract from it’s look just a tad.
Last edited: Sep 4, 2019
Reactions: MartinK9, chas brookes, Janne and 1 other person

Very nice indeed, a very nice surprise to have been gifted and it will fit in with your Steam Tent for sure.
Reactions: Wayland

Wayland said:
Restoration work is somewhat different to other forms of craft work. If you can see the work done then it might be said that it has not been done as well as it could be.
Click to expand...

There's also a school of thought that a repair should not be intrusive, but that there is no shame in it being visible and identifiable. Indeed, some even go so far as to consider it bad to make a repair that is completely undetectable, because the article is not absolutely genuine but is presenting itself as it it were...

I think you've done a marvellous job on this little stove. How was the tinning inside the little pan?
Reactions: Wayland

great looking item , as you say I bet it can tell a few tales , reminds me of "Mr Benn"

Keith_Beef said:
There's also a school of thought that a repair should not be intrusive, but that there is no shame in it being visible and identifiable. Indeed, some even go so far as to consider it bad to make a repair that is completely undetectable, because the article is not absolutely genuine but is presenting itself as it it were...

I think you've done a marvellous job on this little stove. How was the tinning inside the little pan?
Click to expand...

I gather it is actually silver plated on the inside and is in good order.

I look forward to seeing that at the Monster Mash.