I had been waiting most of the day for the fog to clear before taking a walk down to the wood but, by three, it was obvious it wasn’t going to, so I set off anyway. To be honest I don’t know why I was waiting in the first place; I enjoy a walk in the mist.

The edge of the wood is only about five hundred metres from the house but the gate onto the ride that provides the easiest route through is another few hundred metres further on. It’s a pleasant walk in itself and there’s a nice circular route over the fields and back along the lane that’s around four kilometres. The views from the top are stunning; to the North are the Berwyn, East is the Shropshire plain and to the West, on a clear day, Cadair Idris – not today though. In a past life I would have driven hours to walk in countryside like this.

Once through the gate and into the wood the ride drops down quite quickly and I descended into a silent world. It had been a week since I was last down here and the ash trees, that had been discarding leaves like falling confetti the last time, were now bare. There were still birds around but they were moving silently from tree to tree: blue tits, great tits, wrens, robins, tree creepers, blackbirds and our two resident ravens that always fly out to see who’s trespassing. They are used to me now and, once they’ve decided I’m no threat, they give one or two wooden croaks before returning to their roost. As I made my way further in, a tawny owl took off from a tree hollow where it had been waiting for dusk; it was still an hour or so away but it had obviously decided I was too close and took flight.

Apart from the ash, there were still plenty of leaves on the trees: greens and browns of oak, golden yellow Birch and Wych Elm, and, of course, the greens of holly and ivy. The woodland floor was thick with leaves of every shade of yellow and brown and more acorns than I can ever remember. Then, I saw a new leaf; one that I had not seen in the wood before. I have walked this wood for twenty five years and owned it for over three – yet this was the first time I had seen Aspen leaves. I searched around and found one spindly sapling then another. I knew Aspen grows on suckers so I continued looking and found two mature tall trees; how could I have ever missed them? The leaves on the floor ranged from bright yellow to brown and the occasional lovely, variegated, yellows and greens. When I looked there were still a lot of leaves on the trees in beautiful bright yellows and lime-greens.

Other plant life was more evident now that the main ground cover had died back; against a background of golden browns, the mosses and ferns that carpet the woodland floor stood out bright. The fungus was less obvious in subdued colours but was everywhere – ranging from the normal to the weird.

The light was beginning to fade now so I started back up and out of the wood. As I reached the top of the hill, I noticed what looked to all the world like frost covering the grass – but I knew it couldn’t be; it was nowhere near cold enough. When I looked closely the ground was covered as far as I could see in cobwebs that had caught the mist and, in the fading light, looked white.

Looking down to the house I could see smoke curling out of the chimney and I made my way home happy in the thought of sipping a gin and tonic in front of the fire.


The Walk to the Wood 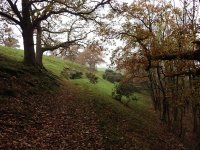 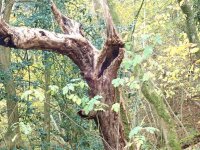 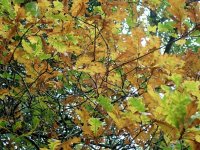 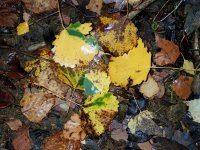 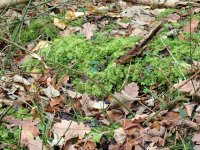 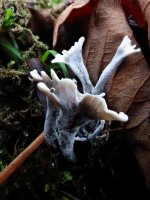 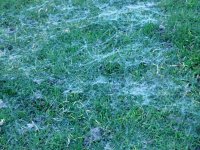 Thank you for sharing, I think I enjoyed your walk as much as you did!

If I was religious, I'd expect heaven to be like that!
Reactions: Spirit fish

Thanks for showing me what you see. Time well wasted, poking around in the woods.

Had a good walk in the mist today too, over the moor on a section I've never been on before. Great fun navigating in those conditions. The sheep sure don't like it when you appear out of the mist though!
Reactions: Toddy, Broch and Robson Valley
B

Thanks for sharing your walk with us.
B

Thank you for sharing, I think I enjoyed your walk as much as you did!

completely agree with that.

Thank you for the lovely walk, let's do it again soon!

Lovely. Never come across Aspen before.
You must log in or register to reply here.

Day Out Scraping A Living

Re-con in a new (old permission)