Snaring and the law in the UK 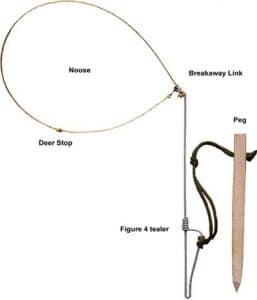 There is a lot of confusion among the general public around the subject of snaring and whether it is legal to do so in Britain. Several newspapers and animal right/protection societies would have you believe that snaring is banned – it is not. With certain stipulations it is still legal to use snares in the UK.

Let’s cover the use of snares in England first.

Rabbit snares may be used in England without any restrictions except to have the permission to do so. Ordinary rabbit snares made from 6 ply brass wire are the best to use and they may be used on tealers and pegs or attached to fences for the purpose of snaring rabbits only. Please note it is an offence to use a snare to take any bird in the United Kingdom.

Snaring in Scotland is still legal but with restrictions in place which may well follow in England shortly, please note that it is the person using the snare that is responsible for knowing the law, ignorance is no defence when you are in the dock.

Restrictions to snaring in Scotland include the use of deer stops fitted to all snares, recommendations by authorities are that the stop should be fitted five inches from the eye of the snare, personally I recommend setting the stop at six inches. The deer stop is fitted only for the purpose of preventing leg snared deer in woodland and for no other reason.

You may also not set snares where the target animal is likely to become partially or fully suspended, this means if you set a snare on a fence and the animal becomes hung up you are committing an offence. Therefore to stay within the law it is advisable to snare out in the open with pegged snares – more on this later.

The use of deer stops on squirrel snares is not specifically mentioned as this is not a commonly used method of taking grey squirrels.

The use of fox snares in the UK is also permitted with only two restrictions in place in England and few more in Scotland. All fox snares must have a deer stop fitted and must not be classed as a locking snare, this means that as the animal relaxes so does the noose, this means the snare has become a restraining device and not a killing tool. The recommendation is that the deer stop is fitted 9 inches from the eye, I recommend 10 inches. In Scotland the same restrictions apply as to rabbit snares. Deer stops, free running eye and cannot be set where an animal may become either entangled or fully or partially suspended.

Now how to use the snare.

The correct size of snare to use whether for fences or pegged snares is one with a loop or noose large enough to catch the target species – for rabbits therefore we would use a 22.5 inch long snare formed into a deep pear shape – not round, this gives us a noose of 7.5 inches long by 5.5 inches high; this covers the full width of the run and allows for the full height of a rabbits head with ears erect.

Snares must be placed on a small beat of a straight rabbit run, not between the beats. NB. A beat is the place where rabbits consistently hop from one place to another along their run and may be thought of as stepping stones, large beats are where the rabbits rest and are often accompanied by droppings on these same beats.

Snares should be set high enough to take the target species and avoid unwanted catches from non target species; therefore we need to set the snare at a minimum of 6.5 inches high on ordinary ground and even higher where the grass or crops are higher.

Using brass snares allow us to reuse our snares many times over before they have to be discarded, steel wire cannot be re shaped. At no time should you try to box in or funnel your quarry, this just leads to avoidance.

Use a snare of 22.5 inches in length and made from 6 strands of .457 brass wire. Form into a noose of approximately 7.5 inches by 5.5 inches. This snare should be set on a small beat not between them, at a height of 6.5 inches.

All of these simple points will allow us the best chance of catching our quarry, whether for vermin control or for the pot.

If you also want to catch grey squirrels using snares, then lean a branch which has been trimmed of all twigs against the trunk of a tree and attach a four ply snare every two feet or so, you can also lay this branch between the boughs of two trees, therefore keeping the squirrel out of the reach of predators such as foxes and badgers.
A noose of four inches is sufficient, set at about four fingers or 3 inches high. If you make a catch around the body and not the neck you must raise the noose by a finger height at a time. The thinner the running branch, the lower the squirrel will run.

I hope this helps in clearing up some the fog around this subject and perhaps helps you in catching your dinner.