The Jungle bag comes in two guises – the military and the civilian version named ‘Travelpak lite’.

The design of the military bag makes it roomy enough and it adequately fitted my 6 foot bulky frame. The design of the foot end is made to a square, presumably so soldiers can wear boots if needed. 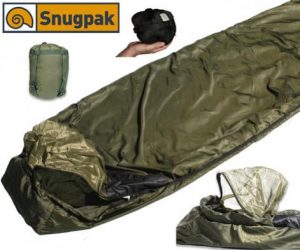 When in the jungle I found the bag warm enough to not require the zips being closed. Instead, I used it as a blanket, pulling it over me during the night when temperatures dropped that little extra.

There are two zips on the bag – one on the short, foot end and the other on the long side. This makes it possible to open the short zip for ventilation whilst keeping the main zip done up tight.
At the foot end of the bad, there are two generous sized loops sewn into the hem which can be used for hanging the bag when storing or when washing or drying the bag out after it’s had a soaking in your rucksack!

The outer material is quite shiny and, for me, this was beneficial for movement within the hammock. I found it easier to get back into (compared to other bags I’ve tried) after the seemingly obligatory early hours call of nature! Having said that, others who tried the bag tended to find that it slipped up to one end during the night, although this could be dependant on how you set the hammock up.

All too often sleeping bags (even from reputable manufacturers) come with small stuff/ compression sacks. I’m really pleased to say this compression sack is large enough to get the bag in easily and will compress to about half its length, making the overall size of the fully packed bag about the size of a grapefruit.

In comparison, the red, civilian version differs from the green and black, military bags in that it has a slightly smaller foot, a semi mummy style, and no mosquito net over the face, which brings me to my main problem with the bag… the mosquito net.

I’m just not sure why it’s there. There are no tabs, loops or Velcro bits to hold it up so it has to lie on the face of the occupant, meaning the mosquitoes can bite you through the net! It must also be acknowledged that not many people like things resting on their face when they sleep either.
With this set up of net, it means that the user is required to use a mosquito net on the hammock and adds extra weight in your pack for extra kit. One advantage it does give though, should your hammock mozzie net break, you still have an emergency mozzie proof sleeping system, a definite plus in that environment.

Finally, the only other point that I found annoying was the toggle on the shoulder drawcord, which would work its way underneath me during the night and cause me to wake up as it was uncomfortable.

Conclusion:
Overall, I really liked the jungle bag as a light, small bag. The extra room the square foot gives can be really handy in the hot, sweaty environments the bag is designed to be used in.

However, I am not convinced about the mosquito net but this does not add too much to either the weight or size and, therefore, as a backup it’s fine to carry around.
I think they are well worth the money and would definitely buy one again.