Trip Report Win Hill wildcamp, with a mini quarry to hide in, and another awesome steak!

Finished my edit, but some pictures sideways, not sure yet what to do about that, sorry! They still tasted good ;-)

Well, it's almost like I'm back on one camp a month! Anyhow, this time I had some warning, some time and actually tried to get out at a decent time, and again, try and get in a bit of a walk. So, initially planning on going back to Bamford Edge, but actually going along the edge for a view of Ladybower reservoir I had a quick look on YouTube to try and see where I might go... Turns out every man and his dog has been up, camped in pretty much the same place and I could find it easily enough. But it looked like it was virtually on the path and would require an early get up. If you have seen any of my videos you'll know that an early get up and quick breakfast are not exactly a forte! So a turned my attention across the valley to Win hill. Still get some decent views and fewer camps seemed in evidence, so I was less likely to be competing for space. Excellent!
Parking up out of the way in Hope I set off up the most direct route I could find, through Twitchill Farm for those that know it. Blimey! It's steep but takes you almost directly to the top of Win Hill. 360 degree views doesn't do it justice, it was lovely! The mountain weather information service forecast of upto 50 mph gusts seemed possible as well... it was already pretty gusty. So, after a pause to soak up the views, and a quick photo with the evenings dessert, it was time to find a place to camp, and pretty much every direction was exposed and flat (but not level) with no secluded spots to be discovered. This is probably why there were not many wild camping videos on YouTube. 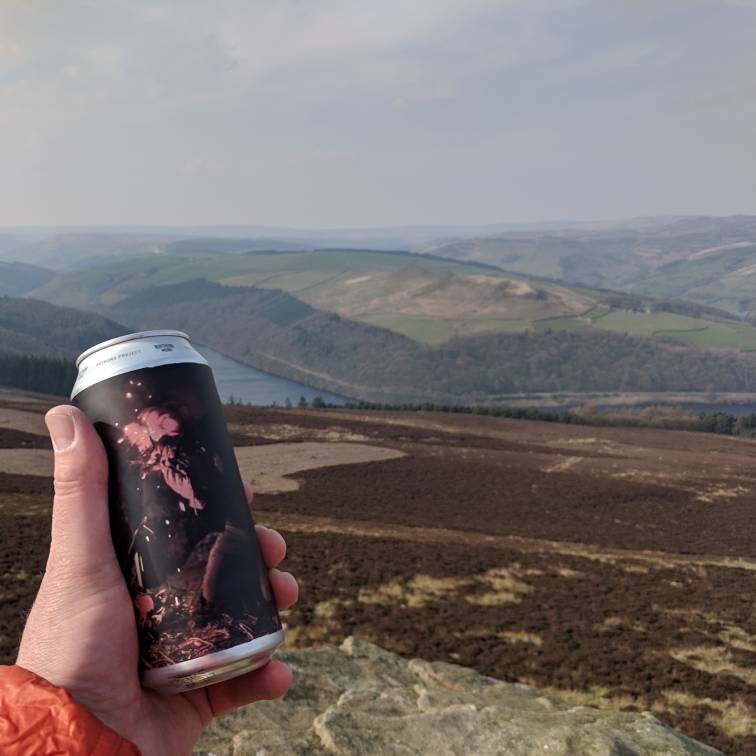 I was however here for adventure so I set off towards the Roman Road with the intention of setting off towards the tree line in the distance. The map suggested a lack of paths or tracks and I might find some seclusion. Part way however I sheep trail alongside a derelict drystone wall caught my attention and I chose to follow it and a few hundred meters on there it was! What seemed to be a mini quarry with a perfect little flat spot for the tent, just waiting for me. The sheep who was in at the time soon decided the grass was greener elsewhere and I moved in. Set up the tent with not too much of a struggle despite the rocks just below the surface and just rested for a while. My mind had been racing recently and the calm and seclusion was doing my mind a service. What also did me a service was a new app on my phone (I know, but it was a good one!) I spent some free credit on something called Peak Finder. It simply creates a line drawing of the landscape to help identify hills, and can overlay it on a live view from the camera. I don't know the names and it was really useful, as well as interesting (yes I had a map, yes I can and have used it in the past to identify locations, but this is pretty cool too). 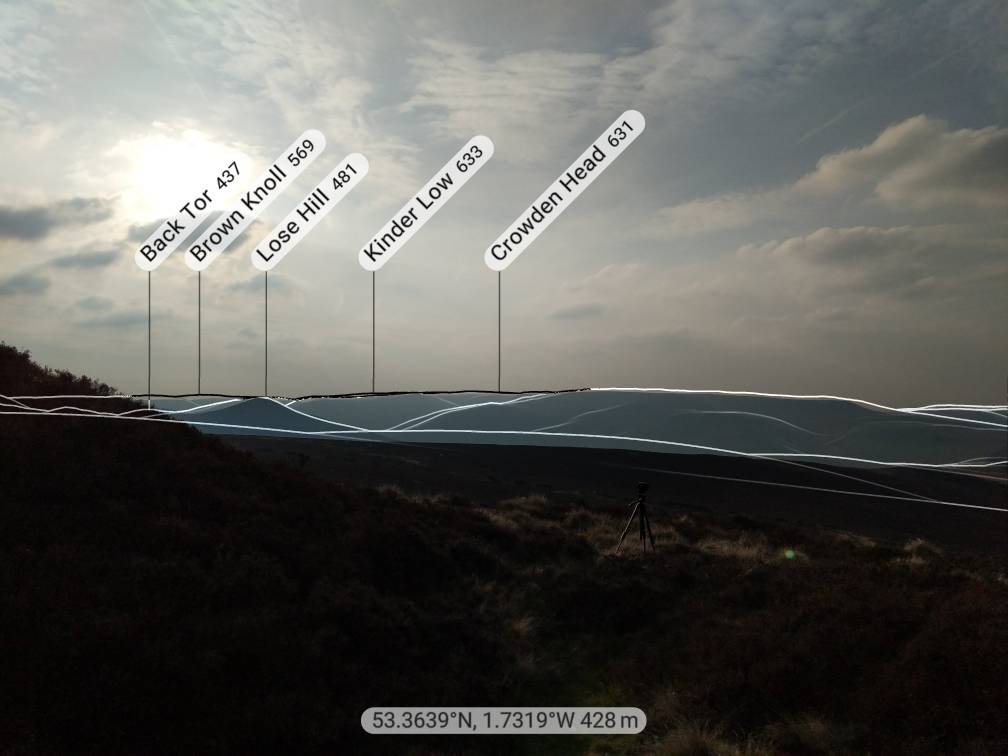 Before long though it was time for another experiment, steak, with stilton (OK Blue Monday but it's much the same) wrapped in bannock. And oh boy did it come good! The extra resting time the cooking in the bannock afforded it was simply divine. I managed to be subtle with the cheese and it wasn't overpowering and all in all it was a great meal. Glad I stuck with the fruited savoury bannock as well, just sweet enough. 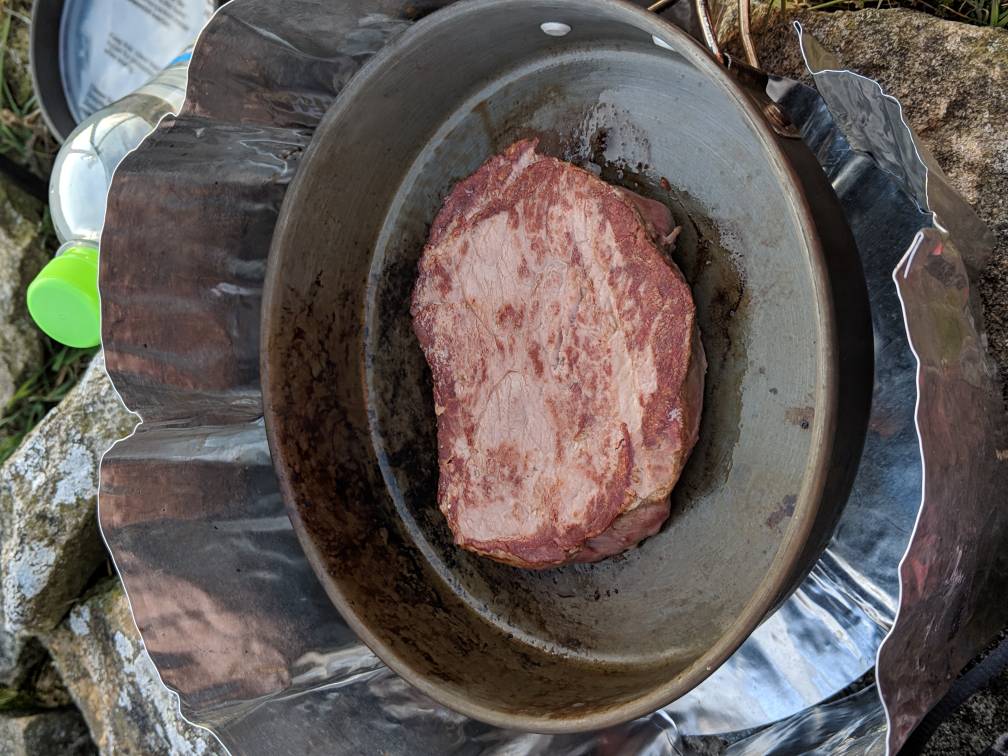 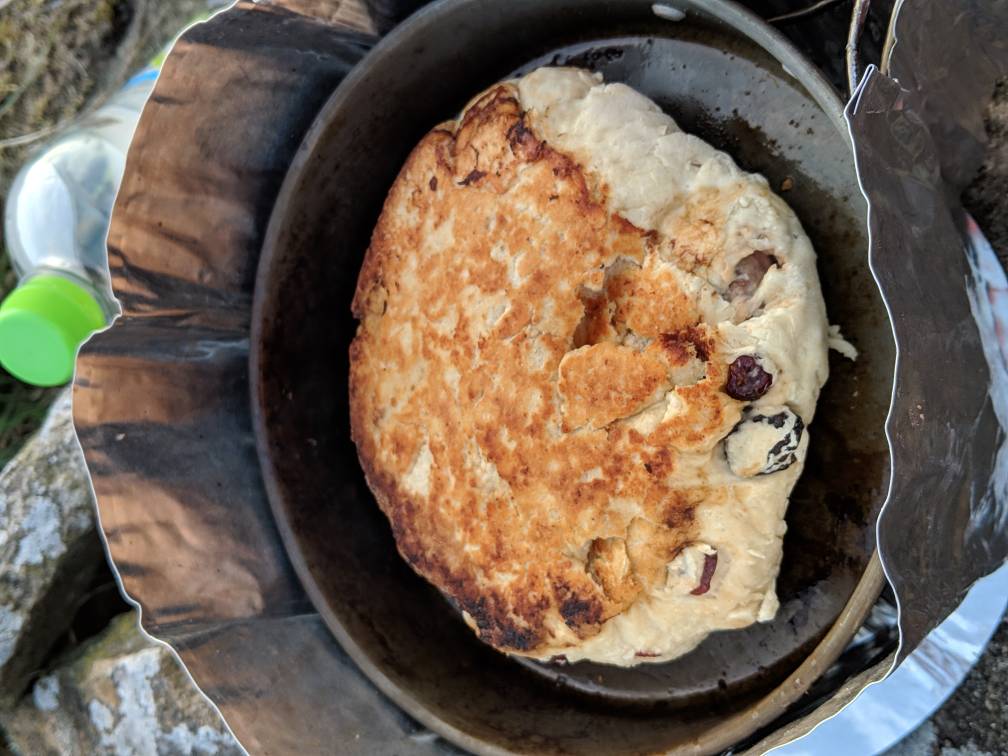 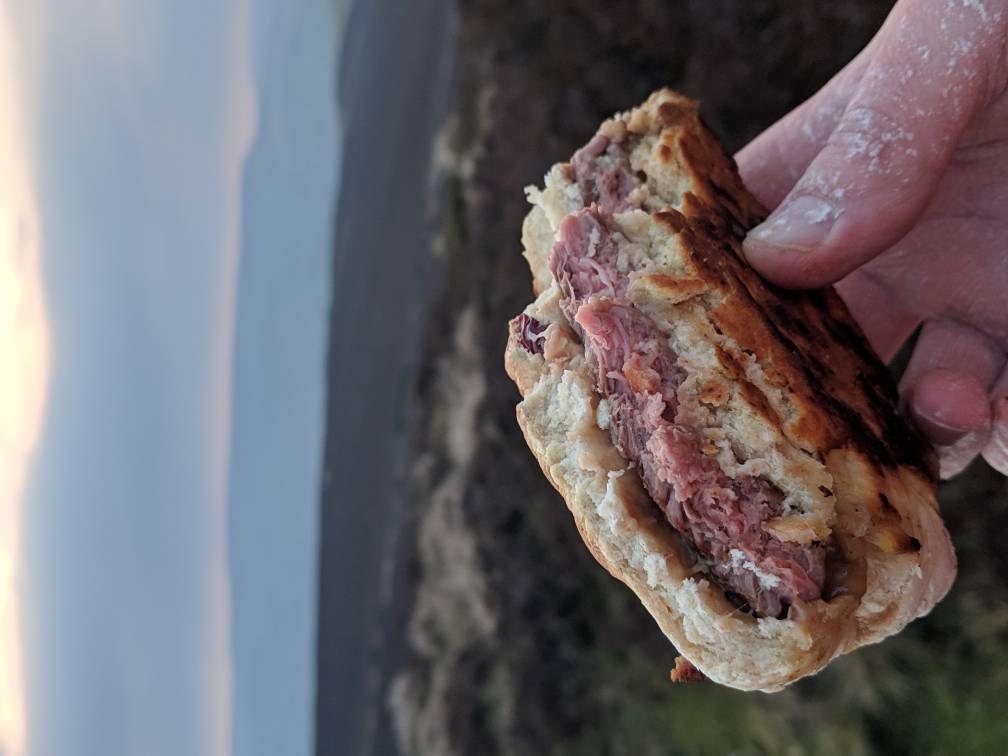 Then Haze Outdoors provided dessert with his Haze-le-Nut porter and an early night was called for. 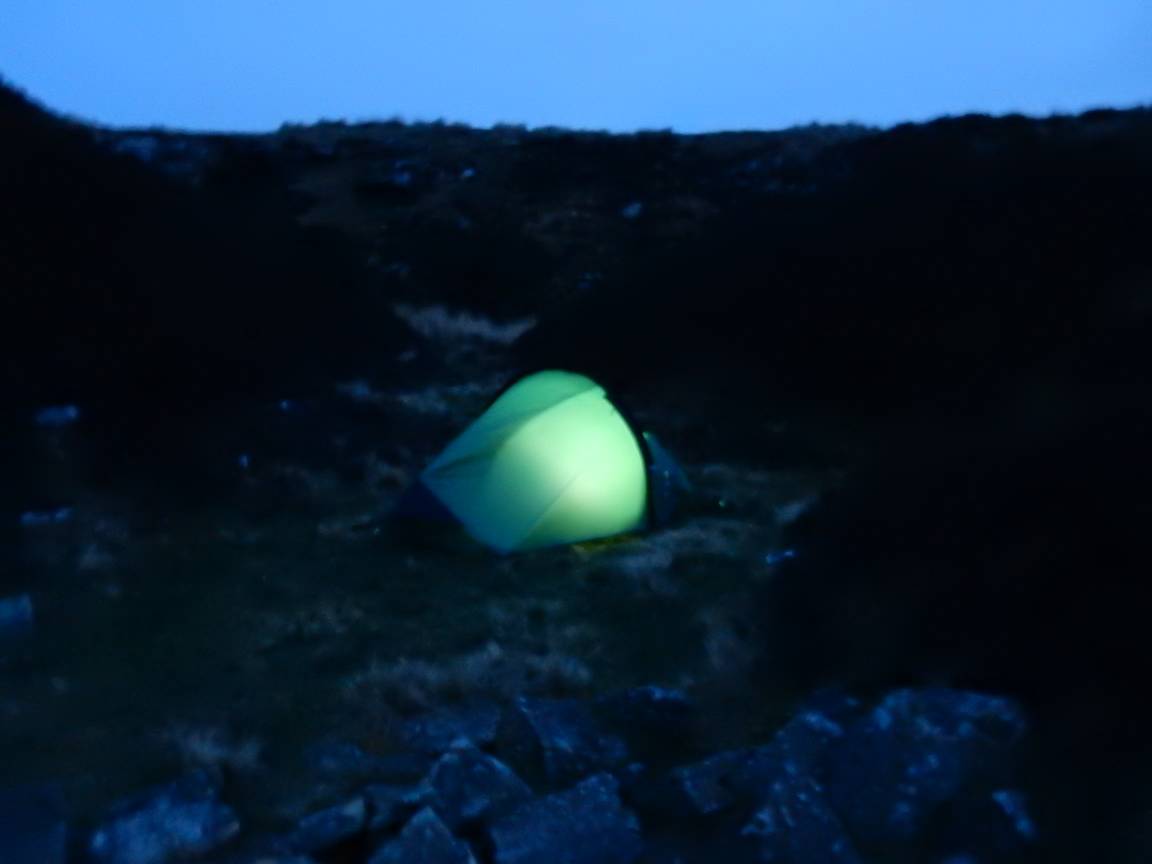 A lie in of epic proportions ensued and come 9 o'clockish I thought it time to get up. Glad I wasn't camped on a path...

As I fired up the Trangia Mini again it dawned on me that I hand't remembered my muffins! However I did still have some unused bannock mix so would attempt to make a big bun. A small over watering catastrophe however meant I had something approaching pancake batter rather than dough, whatever, I'd cooked pretty much the same last time I was on Bamford Edge on that camp so got on with the Trangia Mini mini oven routine. 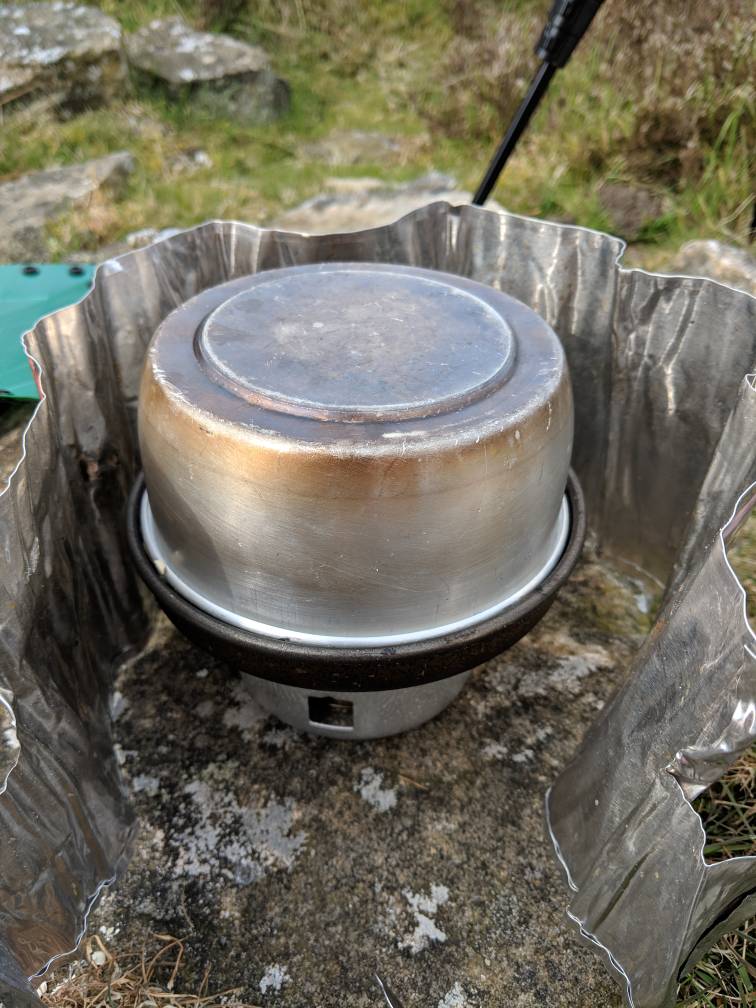 I don't know if I had a little much baking powder or what but the bannock expanded so much there was batter coating the inside of the pan I was using as the oven top! 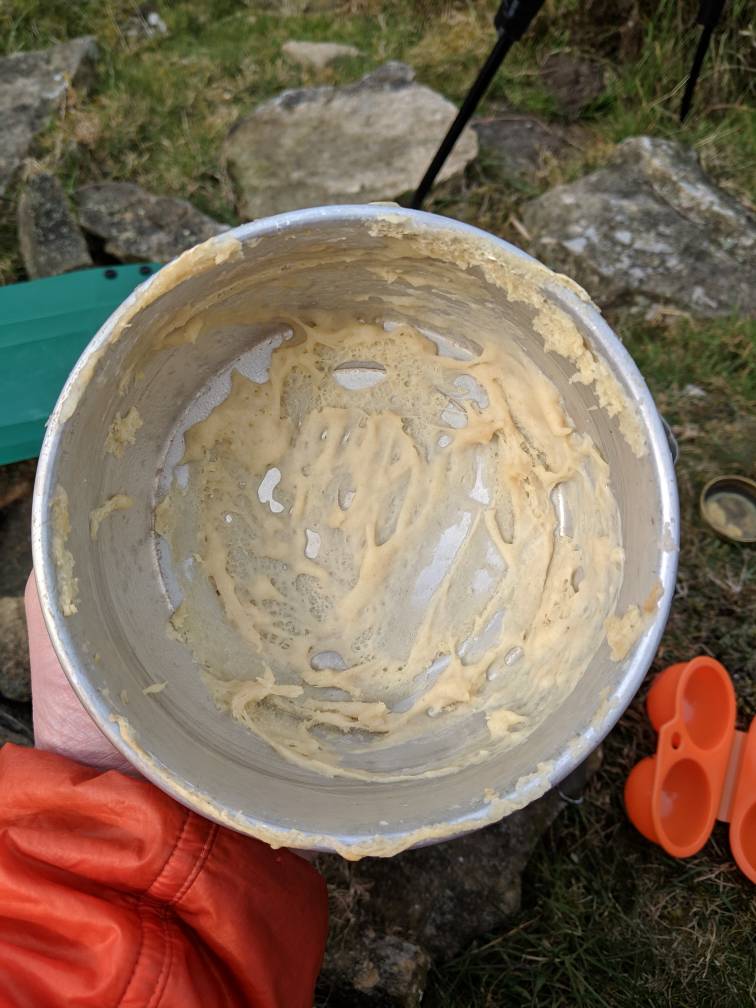 No matter it was back under control soon and a decent bun was formed to host the bacon and eggs. I barely set my impromptu oven gloves on fire at all... (reminder to self, kitchen roll and open flames have a predictable outcome). 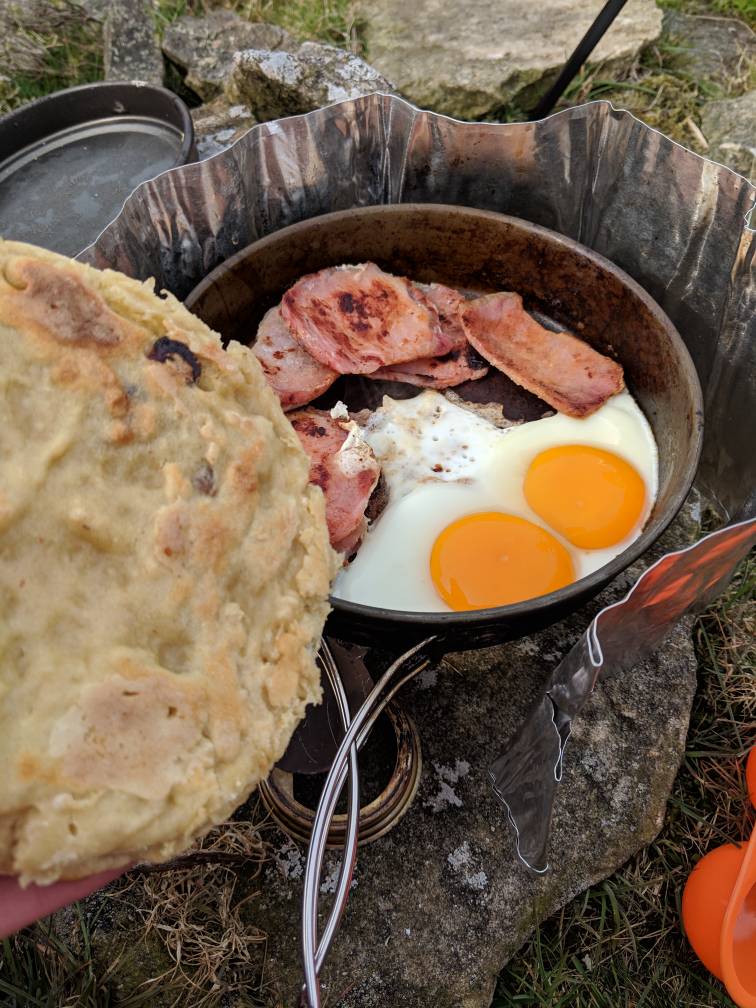 Time to tidy up the camp and just as I was set to head straight back down the hill I received a message that meant I had an extra hour, so I could meander a more interesting route down, only hearing the quarry across the valley blasting a couple of times.

All in it was a much needed and well enjoyed trip out. It bodes well for some longer days exploring and the tent performs as well as I'd hoped for such days as well. As ever I made my film to look back on and stuck it on YouTube so feel free to have a look. There was a fair bit of cooking and a lot of talking to camera but if like me you like leaving a video on in the background for the voice and the option of looking at a picture now and then it will at least save you the effort of creating a playlist! (it's something like an hour and 40 minutes, not sure even I'd watch it all back again in one go )

Is blue Monday made by the chap from Blur?

Riven said:
Is blue Monday made by the chap from Blur?
Click to expand...

You know what, I had no idea so I had a check and yes, it is. His cheese game is strong (well, whoever helped him along) and I might be back for more

Thank you Fadcode. If I'd not been so rushed off have tried to rework the photos somehow so they were all the right way up, but I guess most people can cope

Sent from my Pixel 2 using Tapatalk
B

Started watching your video last night, will finish watching it later today! I enjoyed what I watched though and thanks for sharing. I do love using my Trangia mini and enjoy seeing folk such as yourself doing some proper cooking on them! I discovered another youtube channel recently called 'off the beaten pot' where a fella from the west country cooks up some amazing meals from his trangia set-up. Ideal inspiration for anyone wishing to break away from those wretched adventure meals!

Good video, enjoyed it. That hazelenut porter is hard to find as is the caught in the rain IPA.

Where did you get the cheese? Just realised you are just up the road.

Barney Rubble said:
Started watching your video last night, will finish watching it later today! I enjoyed what I watched though and thanks for sharing. I do love using my Trangia mini and enjoy seeing folk such as yourself doing some proper cooking on them! I discovered another youtube channel recently called 'off the beaten pot' where a fella from the west country cooks up some amazing meals from his trangia set-up. Ideal inspiration for anyone wishing to break away from those wretched adventure meals!
Click to expand...

Thank you, you have some stamina (or glutton for punishment) but is something comes across that's worth watching, glad you are enjoying it I like the mini (obviously) for its size and surprising versatility! Just makes it difficult to just have a straight dehydrated meal and 3 in 1 coffee when I want to see what I can do
I'll have to look up 'off the beaten pot' as Paul Bisseker Bushcraft is the only other one I've really found cooking up with his Trangia. Stevec put me onto book called 'moveable feasts' by Amy Beer and Roy Halpin which looks good as well. I'll never walk anywhere at this rate!
Thanks again Chris.

stevec said:
Good video, enjoyed it. That hazelenut porter is hard to find as is the caught in the rain IPA.
Click to expand...

Got really lucky with the porter, everywhere and to have sold out when I found some on Beer Heroes. Even more lucky with caught in the rain when a friend bought it and we shared a can!
Glad you enjoyed the vid Chris.

Sent from my Pixel 2 using Tapatalk

Riven said:
Where did you get the cheese? Just realised you are just up the road.
Click to expand...

Like the cheese hound I am I... Went into Sainsbury's and bought the smallest chunk of something Stilton looking that they had! I don't know if all Sainsbury's cheese counters will have it, but worth a try. It was, to my mind, a little creamier and less strident than Stilton. Very tasty.
Hope you find some Riven.

Will check my local out. Cheers for that.
You must log in or register to reply here.

Day Out Scraping A Living

Out and About Wednesday at 10:40 AM
Broch

Day Out A brew with a view.

Out and about Catch-up Thread.