We only have another month or so of winter left, so I have been trying to make the most of it before the weather warms up. This past weekend some friends and I had planned on going ice fishing. More precisely, they were going ice fishing, and I was going along with them since I don?t know what I?m doing. To my surprise, Saturday morning, just as I was getting my gear in the car, I got a call from them telling me they were bailing out. The weather report was for rain and/or snow the whole weekend, and that wasn?t their idea of fun.


Since I was already geared to go, I decided to make a quick change of plans. I looked at my maps, and quickly planned out another trip. Some time ago I had done a trip with the AMC where we passed some ruins of an old building. At that time we continued on through the mountain range. However I remembered that to the west there was a small lake, one of the few in the Catskills. It?s called Echo Lake. I decided that for my trip I would hike out there, spend the night by the lake and then go back. It would be an 8 mile round trip, over fairly easy terrain. So, I hopped in the car, and two and a half hours later I was at the base of the mountain.


When I got there, I looked at the weather conditions. I had brought my snow shoes with me, but looking at the snow cover it didn?t seem deep enough to require them. I decided to leave them in the car. 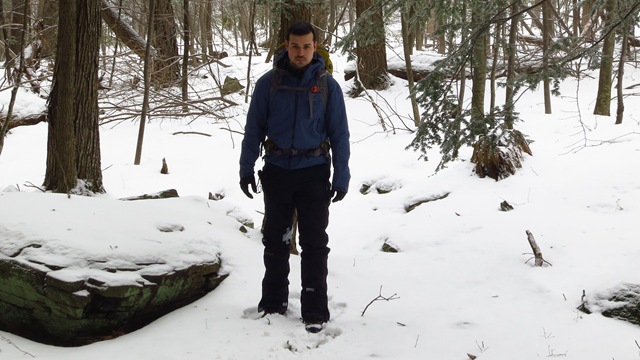 The temperature was in that horrible range right on the edge of freezing. It was cold enough for the snow to stay on the ground, but it was soft and hard to walk on. It was snowing/raining. It seemed like ice. It would stick to the trees in the form of ice, but would melt on my clothing. 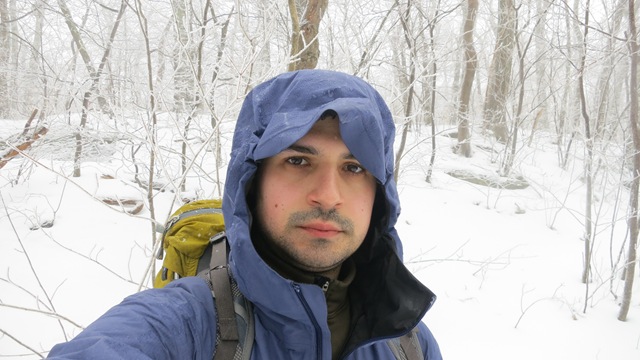 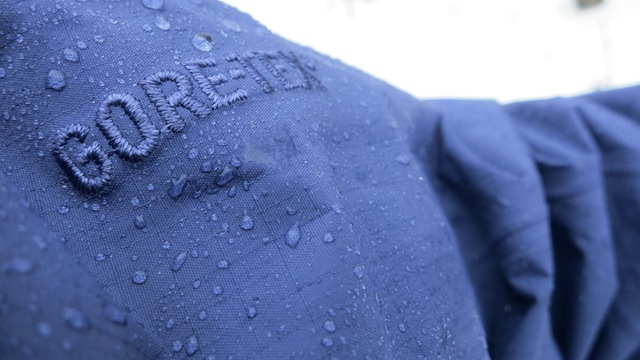 I had to wear my shells for most of the trip, which I generally don?t like to do. By the way, if my face look weird, it?s because I had three of my wisdom teeth pulled out that Monday, so I was still a bit swollen on one side.


Anyway, the snow/ice/rain was sticking to everything, covering all of the trees and branches with a coating of ice. This wasn't the type of snow that you can just shake off the tree. It was solid ice covering everything. Starting fire in this weather would definitely require some wood processing. 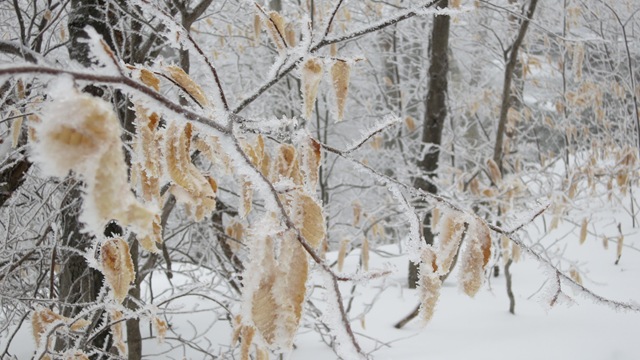 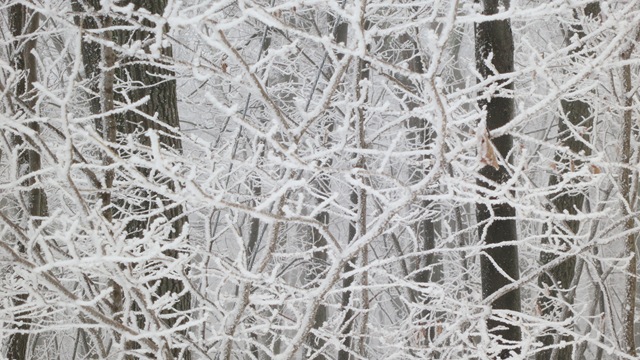 The traveling wasn't hard. The elevation change was continuous and gradual. Enough people had passed this way so that the snow had been compressed and walking was not much of a challenge. By noon I had already reached the ruins which marked the half way point of the trip. I know I have shown you photos of them before, but I figured I would show you some more in the snow. 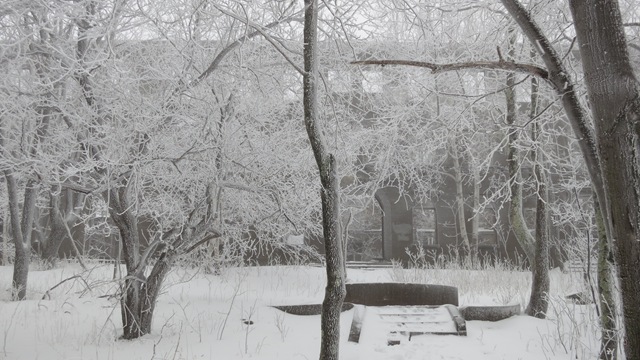 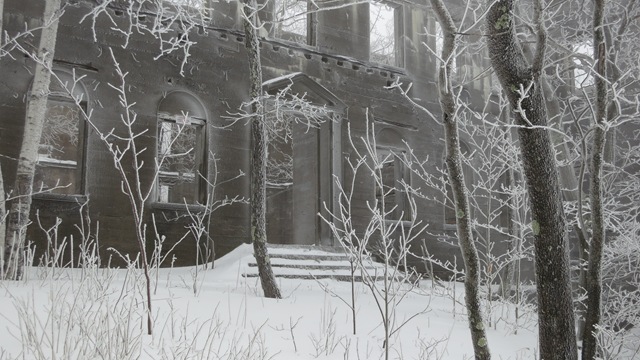 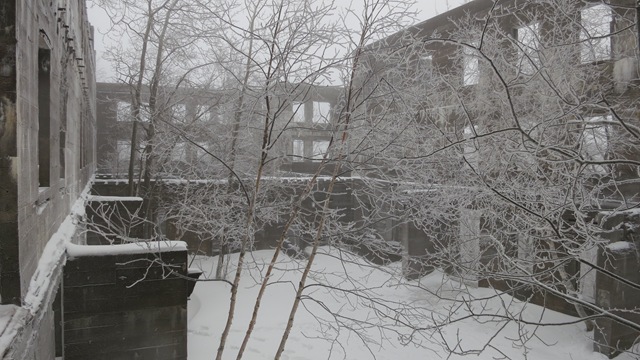 Since it was noon, I figured this would be a good place to stop for lunch and to take my pills (a mix of pain killers and antibiotics, courtesy of my dentist). 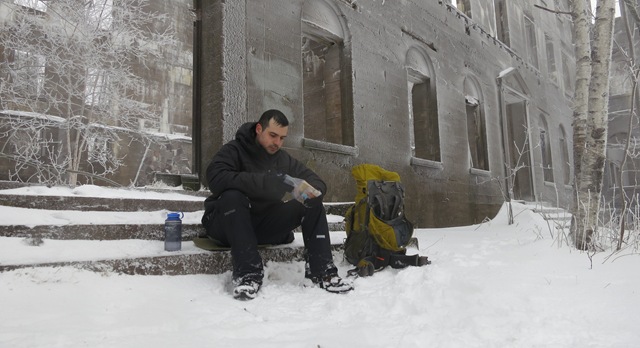 When I was finished, I took the detour to Echo Lake. I imagined that it would be a popular destination, even in winter, but apparently I was wrong. There was only one set of footprints, and looked to be a week old. As a result, none of the snow was compressed, and combined with the higher accumulation at this elevation, I started sinking in immediately. I regretted leaving my snow shoes in the car. At places it wasn't bad, maybe ten inches or so of snow, but in other locations it was knee deep. After a while there were no tracks at all. It looked like I was the first person to go to the lake from this side of the mountain in a while. 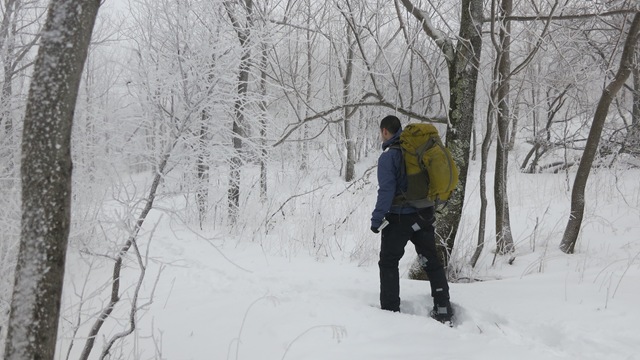 You could still see that there is a trail cut through the woods, but no one had used it in some time. 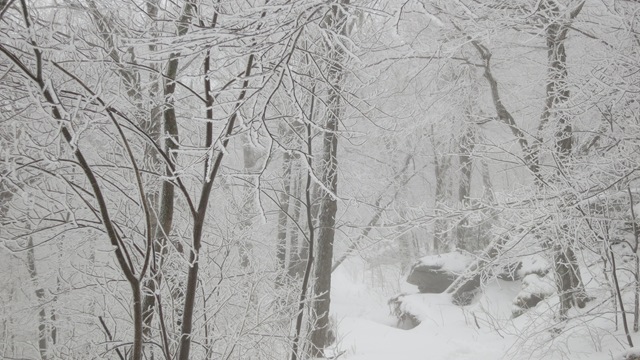 After a few more hours of pushing through the snow, I reached the lake. Luckily, most of the way was down hill. I tried to leave good tracks which I could follow out the next day assuming we didn't get any serious snow. By the time I reached the lake, much of the mountain was covered in fog. 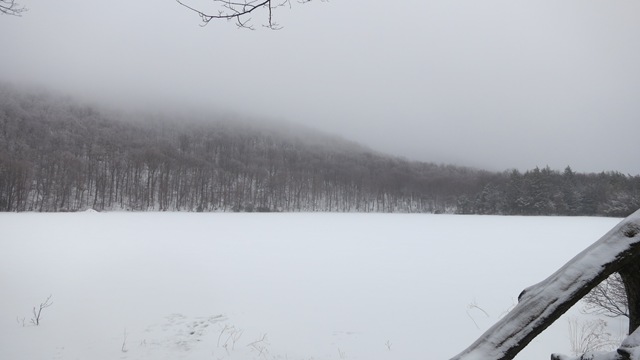 There was a decent lean to shelter by the lake. I don?t like to use them, and prefer to set up my own site away from people, even though the fire place was tempting. 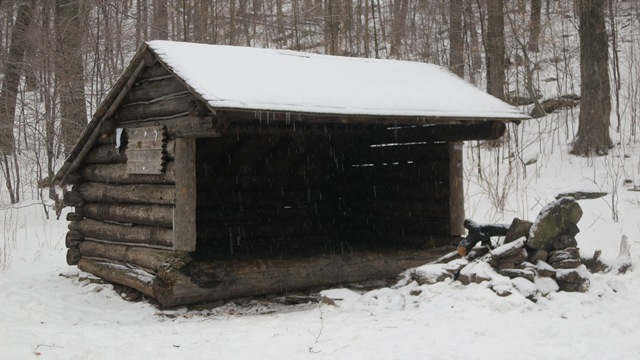 I kept going alongside the lake until I found a good location a bit further up the mountain where I could set up my camp. When the tent was up, I started gathering some firewood which I stored in the tent. 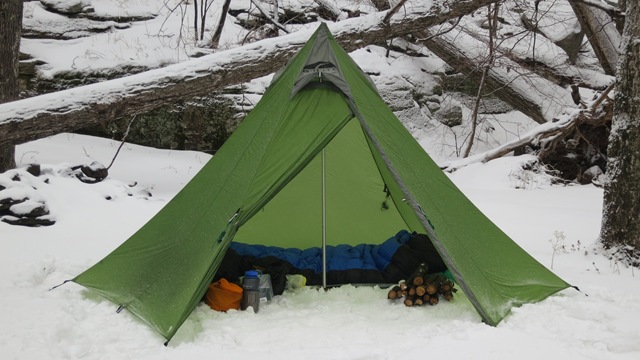 I wasn?t planning on a large fire. I usually don?t these days. I just wanted enough to use for melting water and for some warmth for a few hours. Since this area had only hardwood, and it was all covered in ice, I knew I would have to split some to get a fire going. I hadn't brought my hatchet, so I was limited in the size of wood I could effectively process. Luckily there was some birch by the water, which would make the job easier. There was also ton of beaver sign. 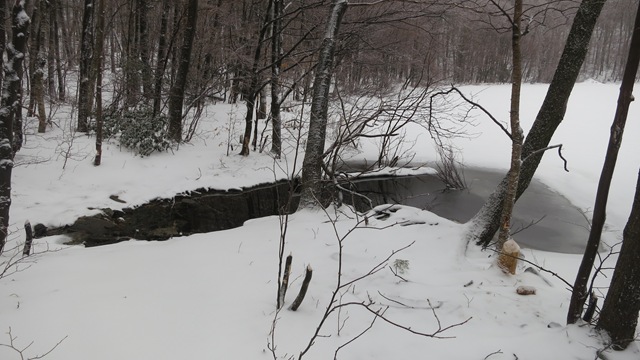 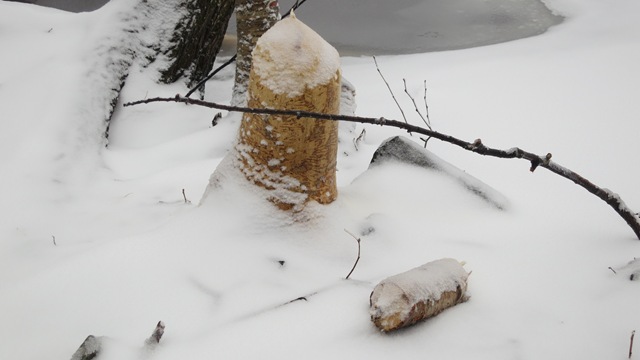 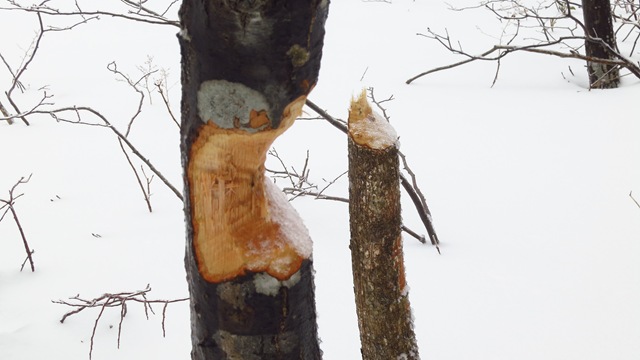 As I was continuing to gather fire wood, I heard some voices in the distance. They seemed to be coming from the lean to shelter. I made my way back there and saw a group of four guys setting up there. We introduced ourselves, and it turns out they had come from the other side of the mountain and were staying there for the weekend. After talking for a bit we decided to just make one common fire at the shelter that we could all use in the evening. The company was appreciated. 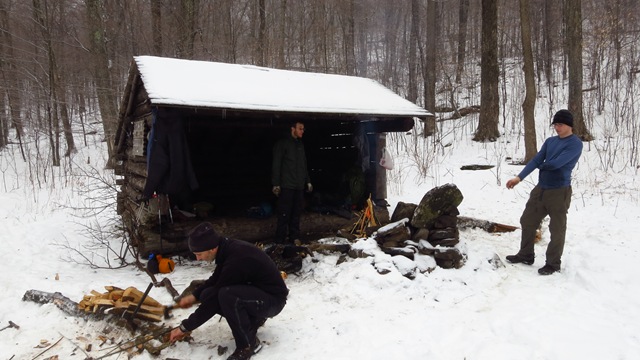 The guys had brought an insane amount of food with them (well, one of them had), which he proceeded to prep for grilling on the coals. 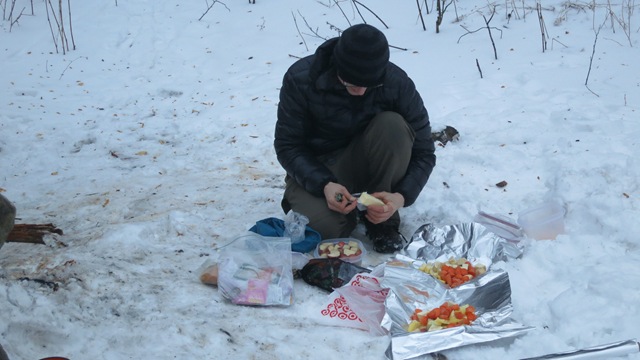 After splitting some wood we got the fire going. One of the guys had brought a Roselli hatchet, which worked well in that role. It?s not something I would want to carve or chop with, but it splits like a mini maul. 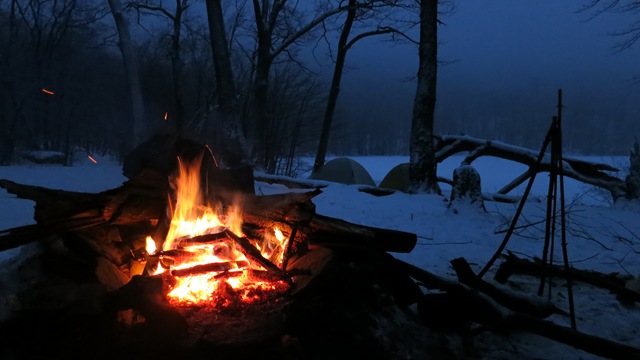 The grilling soon began, and we spent a large part of the evening just killing time. I have to say, these were some of the best ribs I have ever had, and I have no idea how he managed to cook them that well on a camp fire. Much better than my usual instant mashed potatoes.


The next day I got up early, and after having breakfast, I packed up and set out. Everything was wet, and I had to pay great attention to maintaining certain items dry such as my jacket and sleeping bag.


After climbing only a short distance in elevation, I entered the layer of thick fog that was covering the mountain. 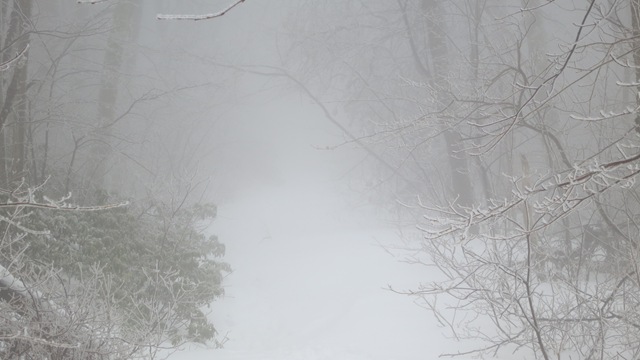 I expected this part of the trip to be much worse than it was. I was able to follow my footsteps out pretty well, and while there was more snow/ice coming down, there the tracks were still very clear. After a few more hundred feet in elevation, the temperature dropped noticeably down to about 23F (-5C). With the lower temperature, there was no more melting snow and ice. There was just snow. I could finally remove my shell jacket. 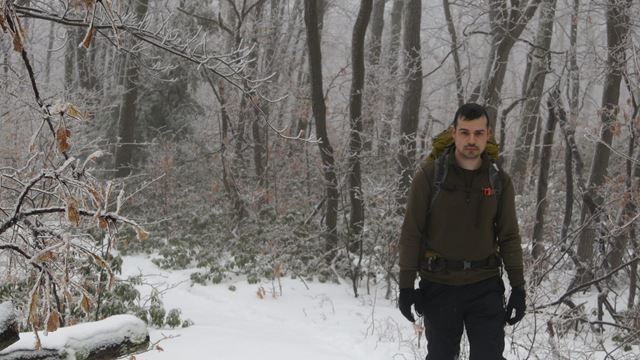 Not long after that the fog cleared and all that was left was a beautiful, frozen winter landscape. 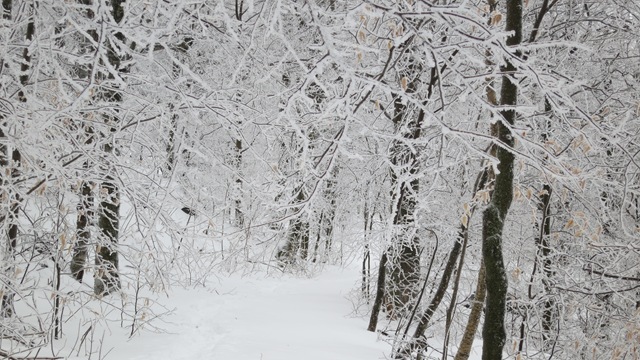 After another hour or so I was back up to the highest point in the trip. From there it was a quick descent down. I only stopped to eat and drink water. A few more hours, and I was back at the car. 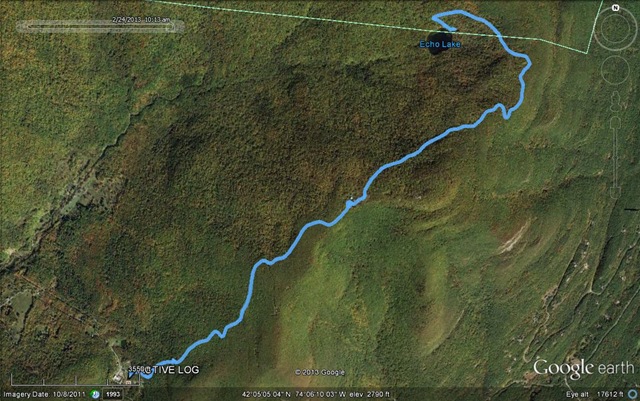 It was an eight mile round trip with about 1200 ft elevation gain. The route required me to go up to a high elevation, and then descent towards the lake. I would then have to climb back out and then down the mountain, creating this amusing elevation diagram.

A nice, fun, easy trip overall. I met some nice guys and had a good time. The weather is my least favorite. I would have much preferred it to have been a little colder, and I also wish I had brought my snowshoes, but those are minor nuisances in an otherwise fun trip.

P.S. I hope I got the dates in the right format this time.

Looks like good outing and a great time. You were lucky with the food too. Thanks for posting.

Thank you. I was very lucky with the food. I am usually very careful with what I bring, but it was nice just to have that luxury for one night.

I'm afraid this is probably going to be my last winter trip this year. The weather is starting to warm up. Today it was above 0C. Now it's time for some outings that are a bit more relaxing.

echo beach....far away in time!


Looks like a great trip! pitty about your friends bailing on you...chickens!

Great write up as always mate

Thanks for sharing your trip, Ross. Nice winter scenes, for sure!

Potton, Bedfordshire or alternatively my own happy

Great trip report thanks for sharing.
Not having travelled much in this US are those lean to shelters provided by government or similar and open to all to use? Is there an etiquette as to what to do if someone is already there when you arrive?

crackin pictures there a good read too thanks for sharing those

Great trip report and pics RG, really nice to see other parts of the world.


Man of Tanith said:
Great trip report thanks for sharing.
Not having travelled much in this US are those lean to shelters provided by government or similar and open to all to use? Is there an etiquette as to what to do if someone is already there when you arrive?
Click to expand...

Lean to shelters are usually constructed by different organizations. Some are private, other state run. They can be used by anyone. It's usually first come, first serve. There are no official rules for their use, but the usual general stuff applies: don't leave anything behind, if there is someone already there move on unless they invite you, etc. They are marked on the maps, and there aren't that many of them (more or less in some areas). Some people like to use them, I don't. I carry my shelter with me, so I stay away from them so I can be away from people and so that others who actually need them can use them.