I know I usually don't post my trip reports here, but I thought maybe I'll start, if I can figure out exactly how to do it.

Anyway, I had some free time this past weekend, so I decided to plan out a trip into the woods. My goal for the weekend was to pick out a route that would be challenging, and would allow me to use a wide range of gear and techniques. I selected a piece of terrain that I thought would let me do that. 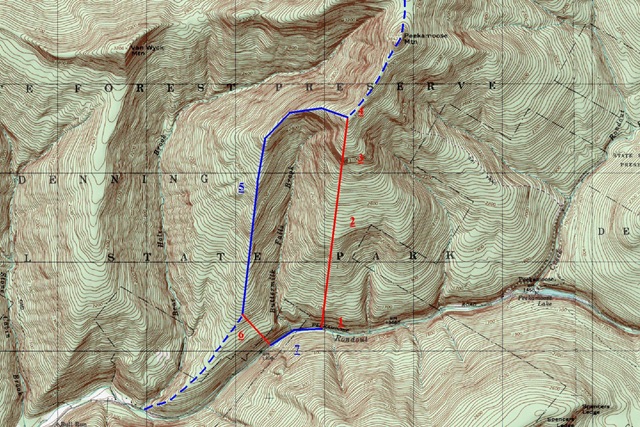 I would start out at the road, at an elevation of about 1200 ft. From there I would take a bearing to a mountain in the distance. It would not be visible from the road, so I would have to navigate based on the bearing taken from the map, and bushwhack from my location to the top of the mountain. The route is marked by a long red line on the picture above. This approach would present a number of different challenges, which would require me to use different techniques and tools. For example, the sections marked as "1" and "3" are very steep with the contour lines of the map almost next to each other. This would require some crampon use and travel over steep terrain. On the other hand, the section marked as "2" is more gradual, allowing for some snowshoeing. The plan was that once I reached the top of the mountain at about 3500 ft, "4", I would connect with a trail that passed through the area and follow it down "5", and leave it at the very end for some more bushwhacking "6" until I make it back to the road "7".


So, I started out in the morning. The whether was good, about 25F (-4C). As expected the initial section was steep, although, I was able to find good approaches all the way up. 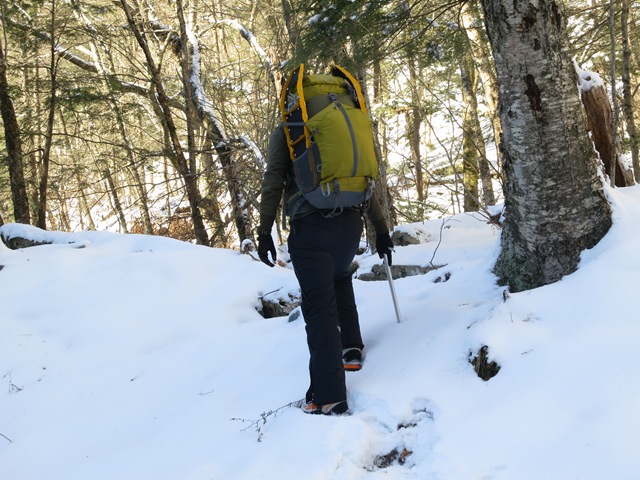 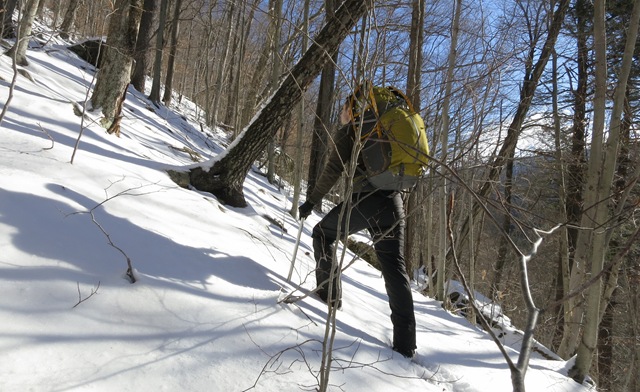 The snow was frozen hard, and a number of animal tracks were preserved. One particular kind seemed to zigzag perpendicular to my direction of travel. I took some pictures. I would see these tracks crossing my path almost all the way up to the summit. 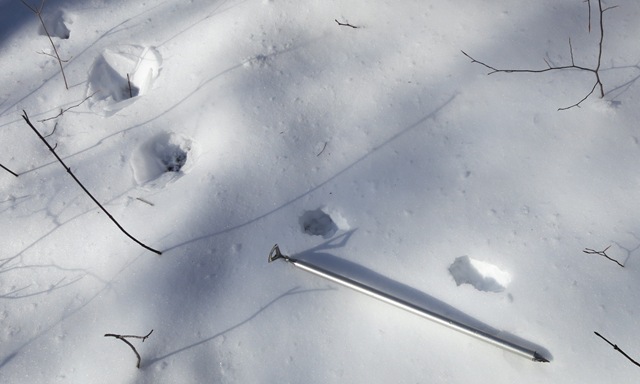 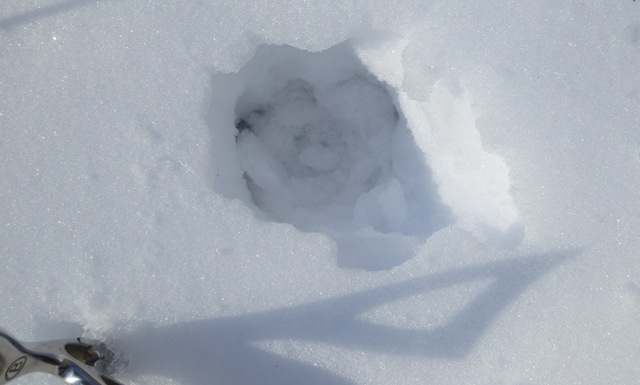 After some climbing, the ground started to level out. The snow was still hard, so I didn't need my snowshoes. I spotted another set of tracks. To my inexperienced eye they seemed like deer tracks. They were headed up the mountain, so I followed them. 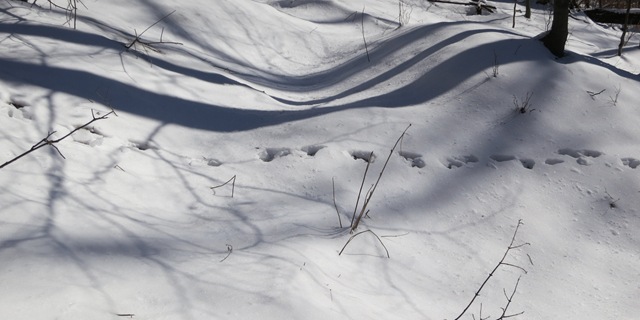 I eventually spotted some scat, which looked like deer to me, but more spread out than I am used to seeing it. 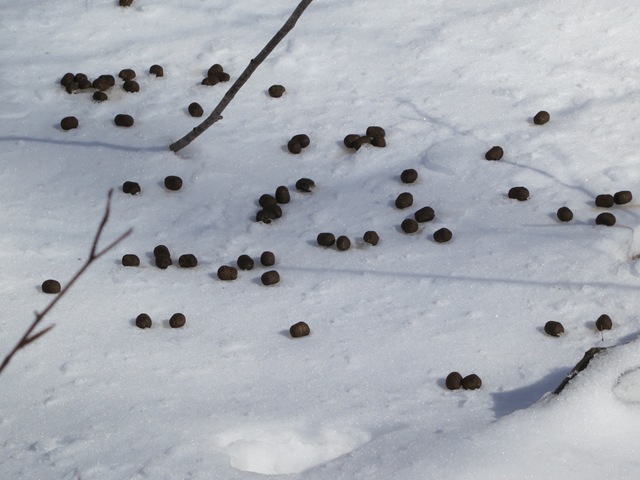 Some distance above that location I spotted, or more exactly smelled, what I guessed was a deer wallow. I am now told it most likely a site where a deer was attacked by coyote. 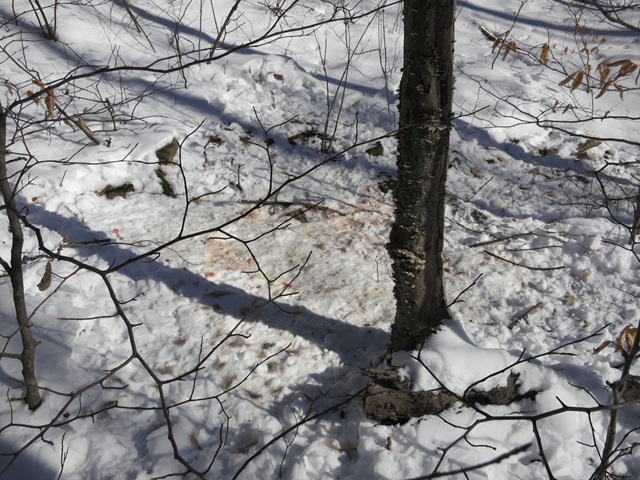 There was a fair amount of blood at the location. I am not familiar enough with this stuff to be able to say whether this is normal or not. 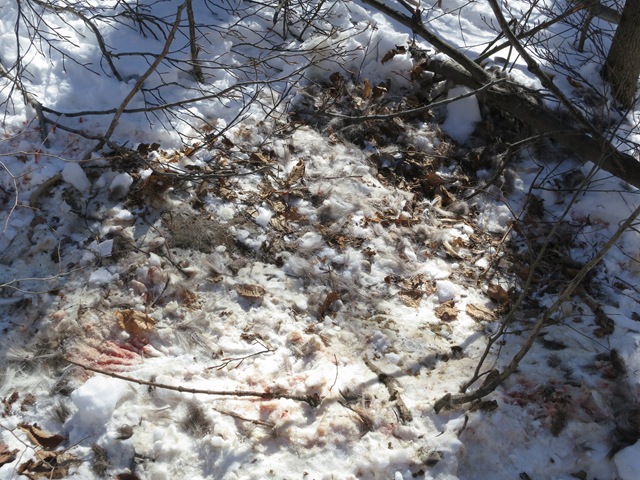 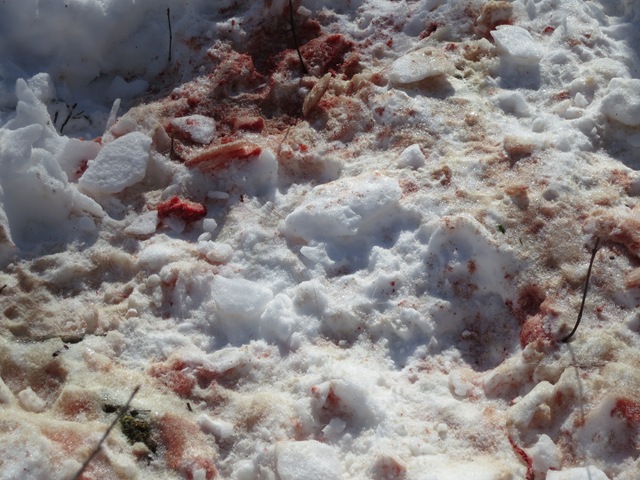 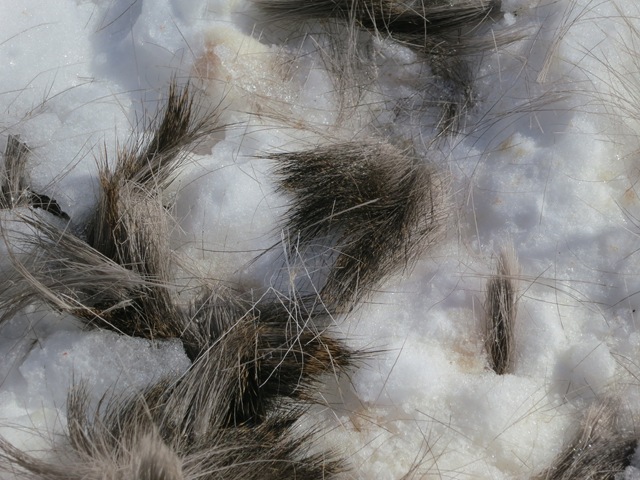 The smell was strong, so I got out of there quickly. I kept moving for another hour or so, at which point I decided to stop and eat lunch. I used the Kovea Spider stove to heat up some water. The stove worked great despite the cold and the fact that the canister was almost empty. 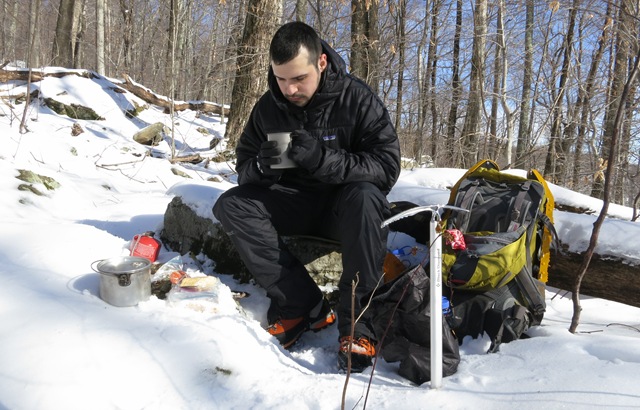 After lunch the temperature had started to climb, and the snow was getting softer. I pulled out the snowshoes. These snowshoes are new, so I wasn't sure how they would work with the shoes I was wearing, but they performed great. The snowshoes I was using are the 25 inch MSR Lightning Ascent. MSR's Ascent series is their most aggressive snowshoe, designed for backwoods use. They have large crampons built into the frame and the toe area. They allow for travel over steep and uneven terrain. I was surprised how well they performed. They were light years ahead when compared the the Army surplus snowshoes that I had used in the past. I was very pleasantly surprised. 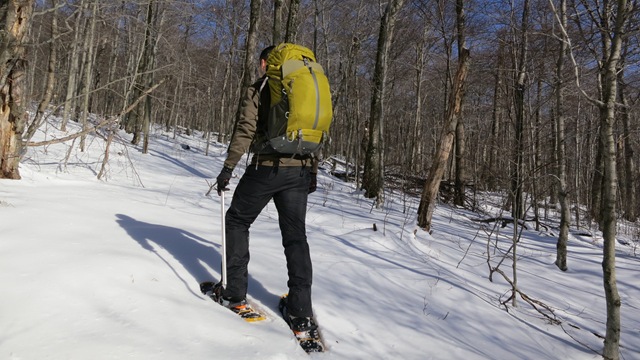 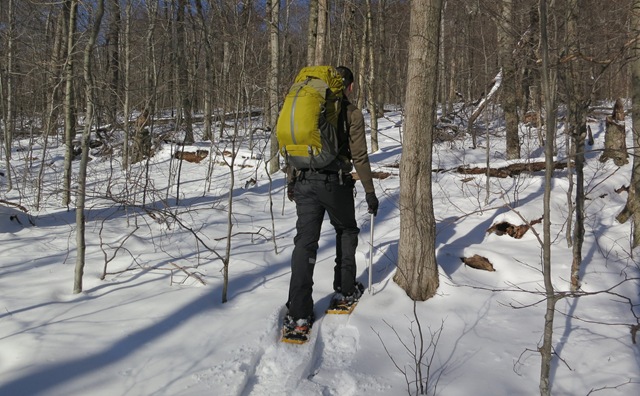 Eventually I reached the second steep section of the trek. This time there was no particularly easy approach. I headed up, and at times I was rather scared. After some climbing, I started to see above the trees below. 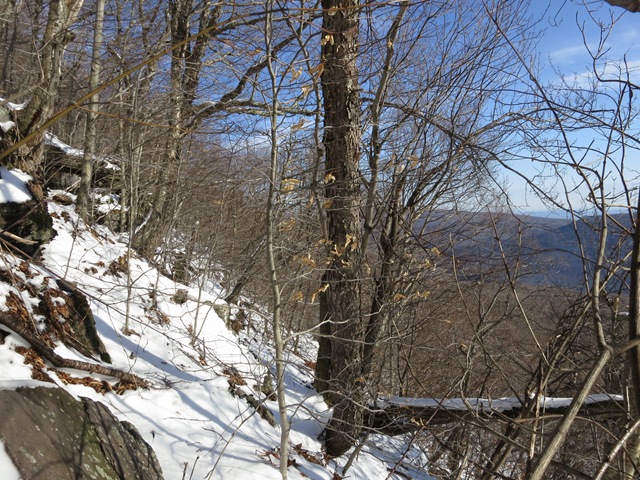 Eventually, further up, I was able to find a good approach to the summit through the rocks. At this elevation the wind was very strong. It made the sweat freeze on me immediately. It was a strange combination of being hot and cold at the same time. 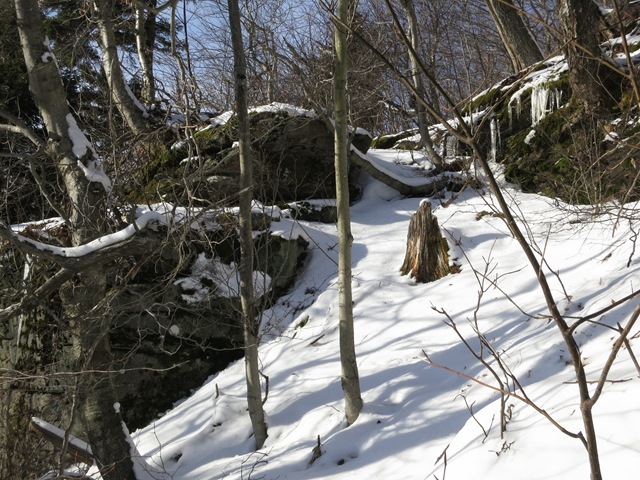 After a final push, I reached the top of the mountain. A few steps away I spotted one of the trail markers. The hard part was done. 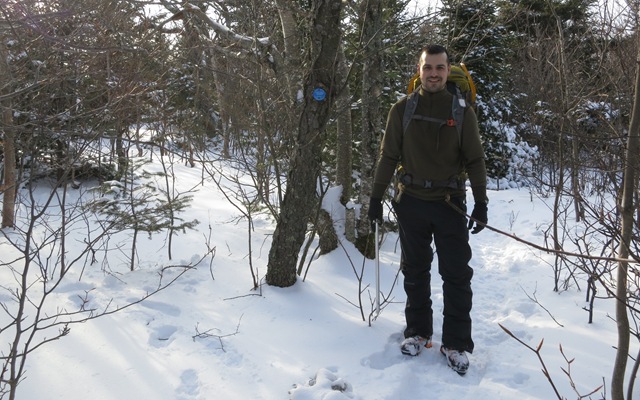 Not far from this location, there was a good shot off the peak. 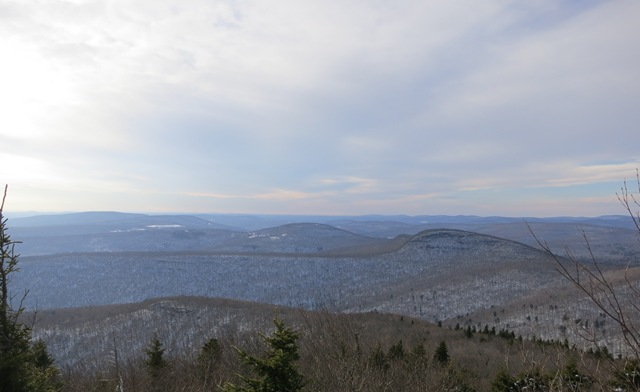 It was now around 4 pm. With sunset at 5 pm, I had to hurry down the trail, so I could get to a lower, and less windy elevation where I could set up camp. I found a good spot some distance from the trail. I cleared out the location with my Bahco Laplander saw, as I had not brought my hatchet on this trip, and stamped out a platform. 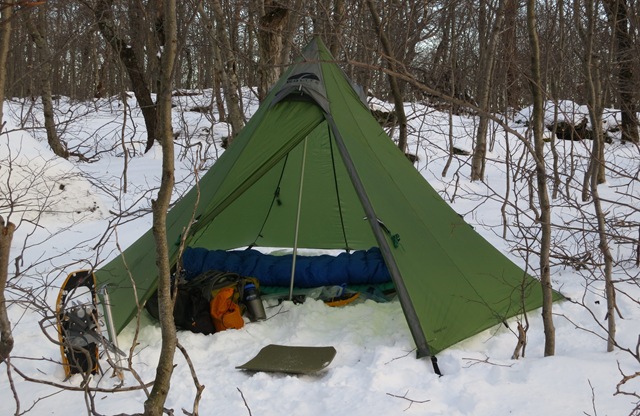 I used MSR snow stakes to for the tent. They are a great piece of equipment. They hold well without much effort.

If you are wondering where the second snowshoe is, it is being used as a support for the center pole. 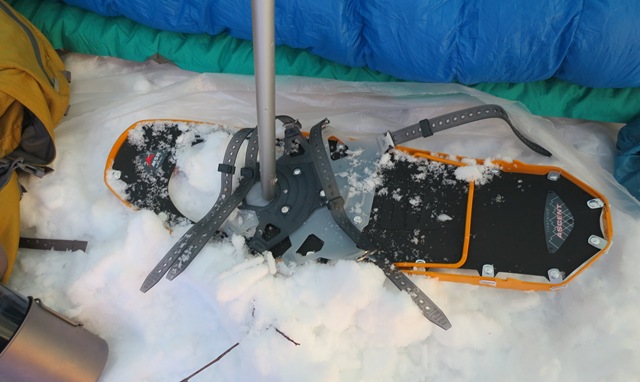 I sat, cooked dinner, and melted some snow so I can stock up on water for the next day. I kept my water bottle in the sleeping bag during the night. 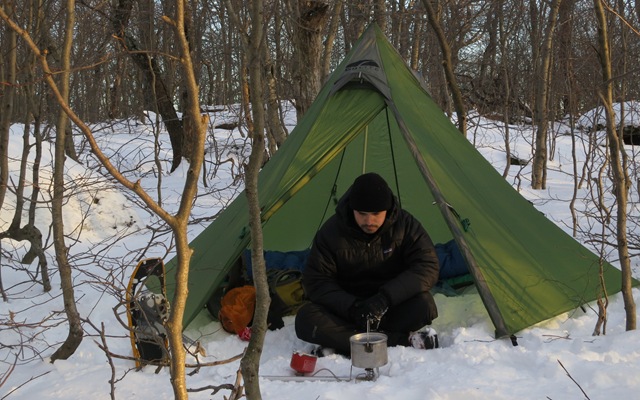 Now, in case you didn't know, here is a trick for using a stove in the snow. Obviously, if you just place it on the snow, the stove will heat up and melt down through it. The best thing to do is place it on a rock, but that is not always an option. Something you can do instead is use your ice axe as support. 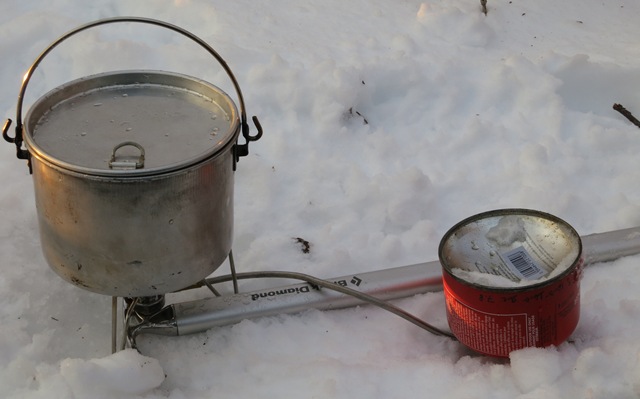 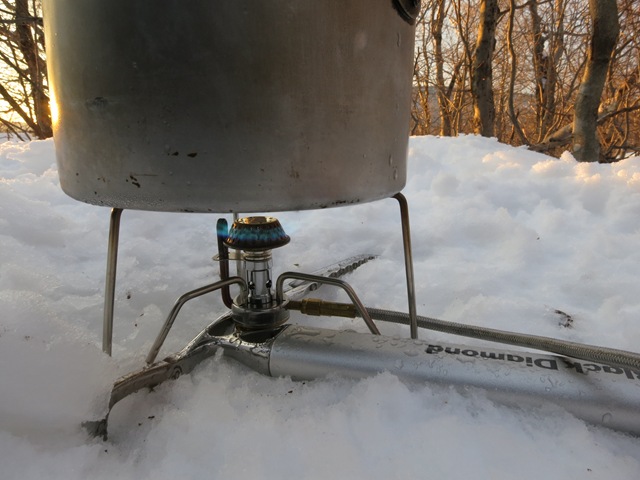 All that was left to do at that point was eat dinner and watch the sunset. 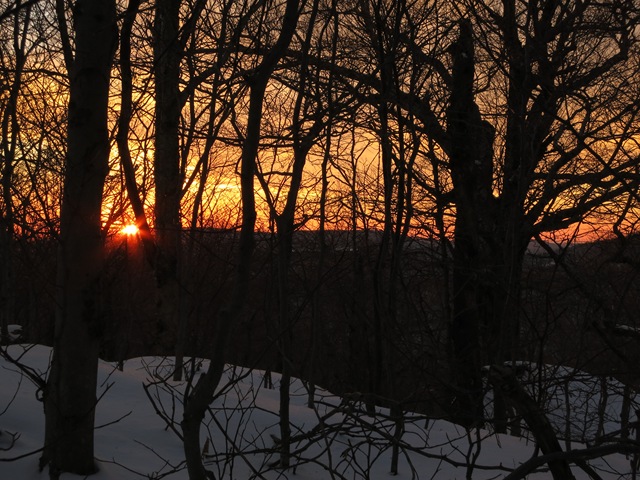 Soon after sunset I went to sleep. The best part of winter camping is that you get to catch up on sleep. The night was uneventful. The next morning I packed up and got going down the trail, or more precisely next to the trail. The trail itself had turned into ice. I found the snow next to it easier to travel.


I had decided not to wear my shell pants for the descent. I wasn't going to be doing any serious climbing, and it didn't matter too much if some part of my pants got wet. The gaiters would be sufficient. 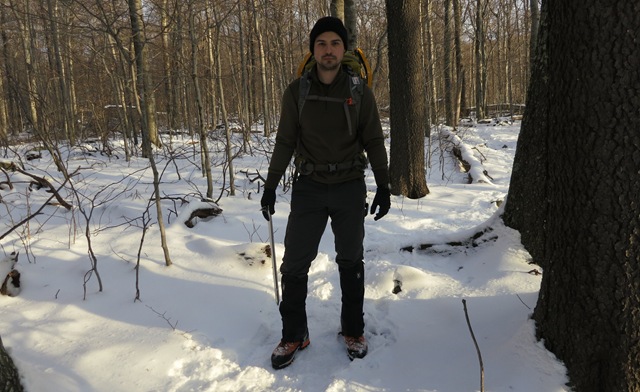 I made good time down the trail, and soon, cut back into the woods towards my final location. When I scaled down a steep section of rock and saw a waterfall, I knew I was close. 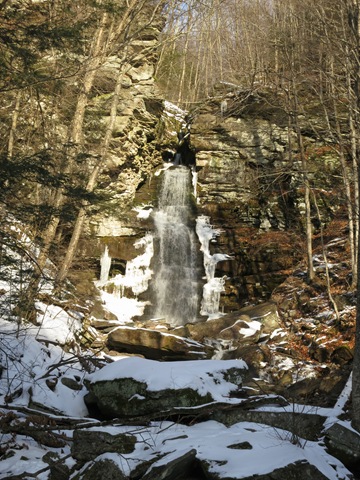 Shortly after I was back at the car. Most of the gear performed well. I was very happy with the Scrapa Mont Blanc boots, the Black Diamond Sabertooth crampons, the REI Flash 62 backpack, the MSR Lightning Ascent snowshoes, the Kovea Spider stove etc. The only problems I had were with the vapor barrier liners (VBL) and the gaiter. The VBL kept sliding down into my boots which was annoying. The gaiters kept accumulating snow under the straps that go under the boot. I?ll have to think of a solution for that. 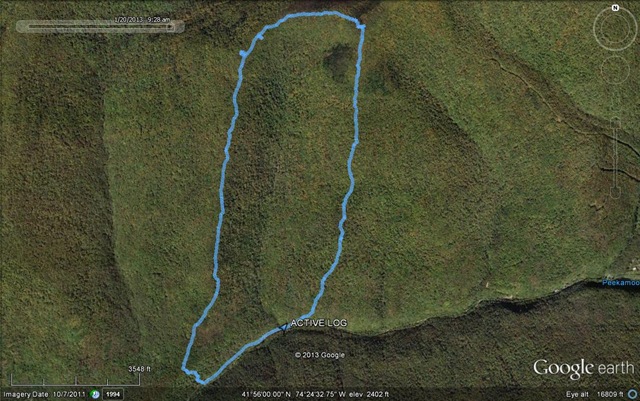 Great stuff Ross, lovely pictures of a great trip, now all you have to learn is the right date format, we simple brits are easily confused lol

rik_uk3 said:
Great stuff Ross, lovely pictures of a great trip, now all you have to learn is the right date format, we simple brits are easily confused lol

Speak for yourself Rik

Nice pics Ross, thanks for sharing, I'll have a proper read when I get home from work later

Great read, enjoyed that a lot. Looks like you had a good time. Two questions, what snow shoes are those and which tent are you using?

Excellent trip report! The pictures of the "predation incident" appear to be normal coyote on Whitetail feeding activity. I am by no means an expert, but I have encountered this enough in the many, many hours I have spent in pursuit of coyotes.

Very much enjoyed reading your report, thanks for sharing.
D

Superb!
thanks very much.

Looks like a great time, nice write up too.

Thanks guys. I forgot about the different date format.

The snowshoes are the MSR Lighting Ascent. The tent is the GoLite Shangri-La 3. I use it without the nest (floor and mosquito netting) which comes these days is sold as a package with the tent, but I have no use for.

Great stuff ! thanks for sharing

Thanks for that. Thought it was a Golite but not 100% sure.

Shewie said:
Speak for yourself Rik

Nice pics Ross, thanks for sharing, I'll have a proper read when I get home from work later
Click to expand...

It was a bit of transatlantic humour FCoL :yelrotflm (FCoL = for crying out loud in case that snippet flew over your head as well or the mods thought I was swearing).

Lighten up and chill out Shewie.

rik_uk3 said:
It was a bit of transatlantic humour FCoL :yelrotflm (FCoL = for crying out loud in case that snippet flew over your head as well or the mods thought I was swearing).

Lighten up and chill out Shewie.
Click to expand...

I was trying to be humorous Rik, oh well

Hey Ross, that looks a grand trip. Very interesting that you happened on a coyote's dinner spot, although we get dead deer here we don't have coyote so the carcass gets eaten differenly; it looks similar to a hawk kill in the woods near here but much smaller, of course. Good tip about the ice axe too. And wonderful pix, thanks for the map and google ref, really helps. Do post again

Good trip report, thanks for sharing

A good trip and a good write up!