My brother loves hiking in pretty high areas in Austria and often enough he does it alone (what usually isn't a good recommendation, but he is very experienced and can risk that).

I would like to gift him a really good bivvy bag, like the Snugpak Special Forces bivvy bag, the Carinthia Goretex sleeping bag cover of the German Army or the usual British Army MOD Goretex bivvy bag.

But I think in this special case I should buy a bright orange or red one.

Most stuff I have seen in red or orange had been constructions I find not really convincing. And most aren't moisture permeable.

What do you think about this bivvy bag here, the Alpkit Hunka XL? Does somebody own an use such a bivvy?

Can you recommend me other similar constructed moisture permeable bivvy bags in red or signal orange?

I would prefere one with a central half length zipper by the way, because he could use it very well in the tent too, but a cut like the MOD bivvy is good too of course.

Which others did you see in the internet or real shops?

Which did you use and can tell us about them?

(Please don't use this thread to discuss the cheap not moisture permeable orange garbage bags they sell every corner. Such stuff is dangerous nonsense in my opinion and qualified to turn every usual overnighter in cold conditions into a dangerous survival situation.)
Reactions: Billy-o

I've used the Hunka for a while for certain things - where weight and size meant it was better suited than the british issue one or a hooped one i have. Certainly very light and compact, and i've never had breathability issues. Personally, i'm never convinced by the worth of a zip in a bivvy (well certainly in a bivvy that doesn't have poles) - i've never struggled myself to get into a bag without a zip, and i just think the zip adds a weak point, a potential route for leakage, and a little extra weight/bulk. Certainly, if your brother would be looking to use the bag as a bit of safety kit, then the non zipped Hunka XL would seem a great choice. It's clearly not a particularly heavy duty option, but that said, i've probably slept 30+ nights in mine, including a few on concrete, and it doesn't look any the worse for wear.

I have the standard sized hunka - just about fine for a 2 season sleeping bag, but would recommend the XL for use with 3 season + bags so the loft isn't compressed.
Reactions: Erbswurst and Billy-o
H

If you want him to be visible why not use a hi-viz panel put up next to bivi if you can´t find bivy in right color?
This is just one example of what I mean: 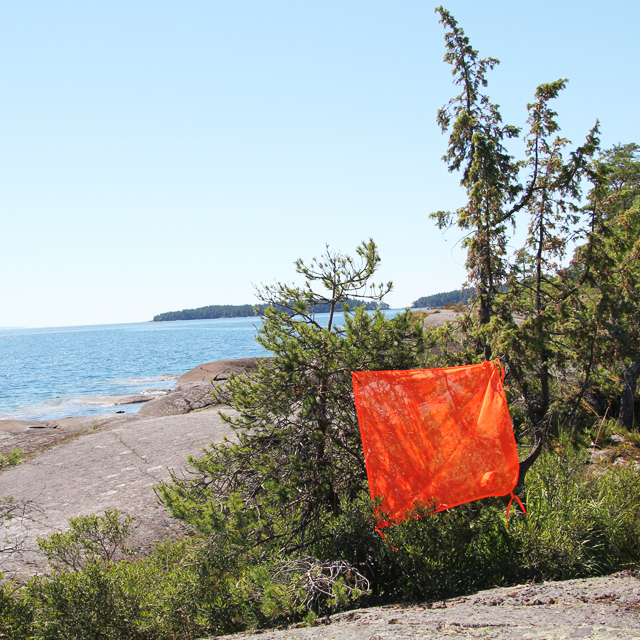 An orange poncho or red tarp might be a good idea in a lot of really lonely areas.
But my brother often hikes above the tree limit and a panel like that could fly away.

Thank you for the information!

Erbswurst said:
An orange poncho or red tarp might be a good idea in a lot of really lonely areas.
But my brother often hikes above the tree limit and a panel like that could fly away.

Hi,
Regarding the panel flying away. Yes, possible, but on the other hand, it is so small and light that it is unlikely to ever be left at home, unlike even the lightest bivvy bag might be. Where it goes depends on how it is anchored. Bear in mind that Jerven provided hi-viz and retroreflective panels with their bags, which are intended for people above the tree line in Norway. Actually, Jerven do bright orange bags too, although they are not what you were looking for, they are very good and might make a good gift in and of themselves.

Nettsiden til Jerven AS
www.jerven.com
Several people here have various versions of these things and Stuart has used his from the Canadian winter to the salt flats of Botswana with great success. Heavier than the Hunka, but arguably bore versatile too.

The Hunka is currently going for £55, while a SOL Escape Lite vented mylar bag is £45-£50 at about 1/4 the weight. Meanwhile, both Outdoor Research and MSR do orange emergency bivvy bags that are half the weight of the HunkaXL, while being 3x - 4x the price. (MSR Pro Bivy & Outdoor Research Helium Emergency Bivy).

The Hunka looks good value. Do you think your brother would use it outside of emergency situations?
E

I will look through the different options a bit later.

Yes, he was used to sleep in a large cotton tent sheed on a rubberised poncho for many years and we also went later for summer camping in France only with the 185x185 NVA cotton tent sheet as coat or sleeping bag. With shorts, swimming breefs, T-shirt, shoes and socks of course, waterbottles, Opinel, toilet paper and toothbrush.
We had a pretty minimalistic mindset in this time. Depending on the weather we used the tent sheed as sunsail, tent, coat or sleeping bag.
When it was raining we were sleeping in shorts and T-shirt in the whet grass, protected by the tent or in the whet cotton sleeping bag. So he reached with 18 a hiking stile others can't imagine to be possible. 25 years later he tends to the cigarette lighter only fraction. Why carrying a knife? He has an Opinel 7 in the pocket, but I doubt that he uses it.

He usually carried a modern igloo tent in the mountains as a couple but now he seems to tend to walk alone.

He owns a light Therm a Rest and a relativly new and compact 3 seasons Ajungilak and surely would try out the bivvy bag. If he gets a good one he surely will love it, because in combination with his other stuff that would be pretty comfortable, especially for him, who runs around in whet clothing if it's raining or even snowing.

This week he rented a room in the valley and came several times back to it after it became dark.

He hates rain jackets, he hates ponchos, he hates umbrellas, he is using only an expensive soft shell if mountain hiking and a polyester fleece waistcoat and polyester cotton mix trousers . He left for the day hikes the tent in the car.

I guess he carried a usual small Italian coffee pot, a gas stove and the sleeping bag around an Opinel No7 cigarettes and lighter, some food and that's it.

That seems to me to be a bit too little for a solo glacier hike.

Yes, he is well educated in using historic equipment and he is used to run around in just trousers and T-shirt in the snow, and for him his new expensive stuff is surprisingly good, compared with the WW2 stuff we used with the scouts years ago.

But of course that doesn't really convince me totally, especially if I get photos showing him crossing a glacier. And I know he is alone there, has no rain jacket and no tent with him, and I don't see any trees on the photos, no wood, only rocks, water and ice.

It took me 2 years to convince him about that a simple small compass would probably be a good idea to carry.

He thinks an Italian coffee maker and a cigarette lighter are enough!

That's it. Without any doubt.

Hmmm. Sounds like he might not carry any bivvy bag, whatever it is. If he doesn't think he is going to spend a night out, is he going to bother carrying anything that would be used for a night out?

I think you are right that the Hunka would be better than the other bivvy bags I found. At least it is a design that could be used for camping when he wants to camp. The other, more expensive or lighter weight options are more aimed at an emergency, but by the sound of it, he doesn't believe that will happen to him, so probably wouldn't bother carrying gear that is primarily intended for emergencies. Difficult for you to successfully buy him something that will do what you want if he doesn't cooperate!

Yes, the main problem is that he became too strong to force him.

The SOL seems to be less waterproof and less moisture permeable then the Alpkit Hunka, isn't it?

I have the impression that except of the Alpkit Hunka all the currently offered orange or red bivvy bags are very light but not as waterproof and moisture permeable as our usual Goretex military bivvy bags.

I think that the orange mountain bivvy bags aren't really meant to spend a comfortable night in them, more as an additional over bag for weather protective clothing as a wind shield.

If I look in the details, and compare them with the bivvy bags of NATO mountain troops, the usual orange ones seem to be meant to die a bit slower.

I always read things like "relatively waterproof in light rain", "a bit less condensation water inside as usual", "well working if opened wide" in the descriptions.

A Snugpak SF or Goretex military bivvy bag is simply waterproof and moisture permeable and stays it. I can eat inside nuts for several days without becoming uncomfortable, as long as it has a zipper to pee out.
Last edited: Sep 19, 2020
H

Erbswurst said:
I can eat inside nuts for several days without becoming uncomfortable, as long as it has a zipper to pee out.
Click to expand...

You´re not sniper, are you?
Reactions: Mowmow and Nice65
E

I am just very lazy.