Has anyone made there own lobster/crab pots? I intend to drop one or two from the kayak this year (for those wondering, in Yorkshire you need a license).

Commercial pots are very plasticky and heavy, but the cheap collapsible ones are a bit plasticky and flimsy. I had good success with the cheap ones last year but rarely anything in size and lots of small stuff. I was wondering if there is an eco alternative I could make to suit my needs. I was thinking of using wood, and maybe galvanised wire, but I have reservations about wire in the salt and the wood taking on water and making the pot super heavy.

Has anyone on here made one? I did make a couple of prototypes but they didn't turn out how I had envisioned, one was a wooden rectangle that was big and heavy the other was a flimsy pyramid. I was hoping to maybe weave one from willow....

??? How do you get it to sink and stay in place.???
Reactions: punkrockcaveman

I was thinking about bamboo! Light, flexible and strong. Cheap!

I have some old sit on mower blades ready to use for weights
Reactions: Robbi

Get in touch with Frazer from coastal survivor. I've watched him teaching how to make fishing pots with willow at the wilderness gathering.
I'm sure he could give you some pointers on how to go about it.
Reactions: Crowe and punkrockcaveman

I've not made one myself but have always fancied having a go.

How about this one?

Yes! I’ve made a couple. Unfortunately no pictures though but I’ll try and explain...

I got some steel reinforcement mesh and cut then folded it into the shape I wanted. I then used old pallets to make a box for the bottom, and wrapped ropes around everything to hold it together. I also found an old fishing net on the beach so wrapped it in that too! The entrance was right on top and made from an old catering mayonnaise bucket with the bottom cut off, and cable tied in place. That way I don’t need a lid, I can just reach in and pull things out. A couple of small weights inside and a mackerel head or two thrown in for good measure lol.

I take them out in a powerboat so they might be a bit heavy for a kayak but you get the idea. I might be able to get some pictures but where I keep them is off limits at the moment due to the virus.
Reactions: punkrockcaveman

Go to the fishlocker workshop on youtube he has a great video on there
Reactions: FerlasDave

Well. I've managed to put together a mk.1 pot. I really fancied getting some welded mesh as it holds it's own shape and wouldn't need any support, however I couldn't find any for a good price, so I ended up buying some 50mm plastic mesh from b&q for £10. This was enough to do one pot. I used bamboo and willow for struts and garden wire to hold everything together. A doctored 200mm plant pot made the entrance. I found a couple of half bricks, the ones with holes in for the weights, used an old 5 litre screen wash bottle for the buoy and a washing line rope for the line. Just need a bait trap now! It feels just the right weight to be manageable from the yak. The frame on its own is super lightweight. 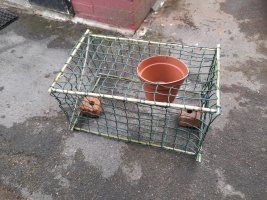 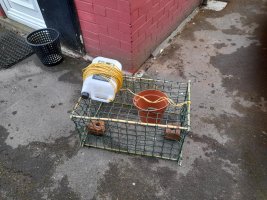 spot on !! that looks the Bizz !!
Reactions: punkrockcaveman

I look forward to seeing the results
Reactions: punkrockcaveman

That looks spot on! I would just throw in a bit of bait, it’s a cage anyway so not going anywhere. Perhaps a smaller net wrapped around it to stop the little crabs getting in and pinching the bait.
Reactions: punkrockcaveman

Davey569 said:
That looks spot on! I would just throw in a bit of bait, it’s a cage anyway so not going anywhere. Perhaps a smaller net wrapped around it to stop the little crabs getting in and pinching the bait.
Click to expand...

I'll make a bait cage as the mesh is 50mm square, a whole mackerel could go walkies out of it, plus I'll be able to position the bait near the entrance and away from the sides to try and entice the bigger crabs and lobsters in, but hopefully suspend it out of the way of most of the small bait robbing crabs.
Reactions: FerlasDave 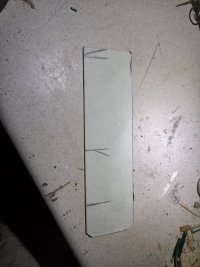 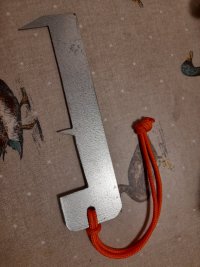 Knocked this little gauge up to go with the pot. Inner dimension is 87mm for the lobsters, outer is 140mm for crab.
Reactions: FerlasDave, MrEd and Broch 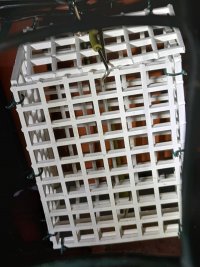 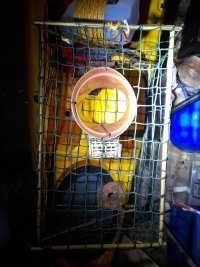 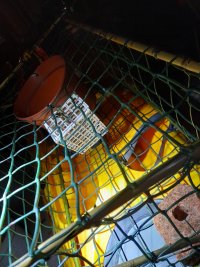 Had some weird white grid officers going spare at work so I've fashioned a wee bait cage for the pot, and fitted pot tags too, it's all ready for action now
R

Wonder if I could make some lobster jerky... that would post well.

Nice. That looks like it will do the trick! How is it going to sink though??

Davey569 said:
Nice. That looks like it will do the trick! How is it going to sink though??
Click to expand...

It's got half a brick at each end pic in post #8
Reactions: FerlasDave

Sorry you’ll have to excuse my “man look” as my wife would say!
Reactions: punkrockcaveman

So a little update on the lobster pot. It's had 3 outings this year.

The first was on the East coast, end of May, where it is mainly a lobster fishery, but they do get edible crab and very occasionally spider crabs. It was in the water for around 4 hours during daylight, on a small tide, dropped around 30 yards from a rocky reef area and unfortunately it had nothing.

Fast forward to the weekend just gone, north of Aberystwyth. I dropped it off on Friday night probably 10 yards off a very shallow reef and checked it in the morning. To my surprise, it had worked! So it had been in the water for around 12 hours and overnight. It had two good spider crabs in it, both males with good size claws full of meat. At this point I should say read all rules nd regulations regarding pots for any location you are planning to use them, the rules are different all around the UK. 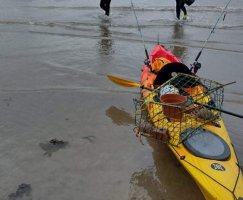 What is truly amazing, is what else had managed to get into the pot. A decent sized bull huss, or greater spotted dogfish. This thing was probably 8 to 10 pounds in weight, and was truly a night mare to get out of the pot!

After the day afloat I rebaited the pot and reset it near another reef bit it was probably 30 yards from the reef. This time it was left for 24 hours, and it produced two good cock spider crabs. So another win, but I feel that closer to the reef could have produced a real pot full of spider crabs, they were prolific we could spot them in the shallow areas of the reef almost out of the water and caught them whilst fishing bait at anchor on the kayaks. I'd like to redsign the pot with a 25mm mesh (It feels like a lobster might squeeze his way out with it being a bendy plastic) a slightly larger entrance (some of the spider crabs were difficult to get out, and this would surely be stopping some of the very large crabs getting in) and improve the bait cage as it was too easy for the crabs to pick the bait apart with the mesh size being too big and occasionally the cage would drop off into the pot loose.

I'll update the thread as it gets more time in the water.
Reactions: FerlasDave, wookii, Brizzlebush and 3 others
You must log in or register to reply here.

B
Crab and Lobster Snares