Status
Not open for further replies.

Here we have a once in a life time chance to own something super special.
This took me about 150 hours to make.

Pics taken in the local army store, same with the video. I took it in to see if they would sell it for me. Got some silly offers!!

Anyway.. its made from a ripstop dpm jacket.. the right way round... some people make ghillies like this with the jacket inside out.. I didnt.. you can get into
all the pockets, and it has 6 of them. 2 lower, 2 upper and 2 zipped at the chest.
Hood it button attached.
Its got a silly number of individual strands of hessian sacking on it.. I did try and work out how many.. but it was several hundred thousand..hence the time it took.

This is pretty heavy, not so much so when wearing... but then the weight is distributed. So postage is going to be a bit costly. Not impossible. Possibly about £15 with parcel force.
You can pick up from me I'm in Stoke on Trent - ST1 5JL or I'll be in Royal Wootton Bassett on the 6th/7th and possibly 8th of Sept. (theres a charity even, town parade, and a few other things on there, that I'm taking part in)

I have a number in mind for this, as I know how much it cost me to make, not including time. Going back to the silly offers at the shop. 1 muppet wanted to get it for the same price jack pyke sell their
crappy couple bits of plastic for.

What am I asking... well.. I'm looking for offers around the £200 mark for collection - Its the amount I need for fuel to head over to Germany in a couple of weeks time. (I may even have room to bring a few nice items back!!)
£215 if posted
I'd rather have the money into my bank or cash.. might have my arm twisted for paypal.. but... you would have to twist it a lot.

(start pic.... when I first started it.. you can see the jacket... the camo netting net.. and each strand)


You tube video link below...
[video]www.youtube.com/embed/CDsoqrphdJc[/video]

no interest at all??
loads of views.. but no messages or comments.. wow

looks really good try one of the airgun forums you may have better luck,
Anyways good luck with the sale mate.

Yep, a shooting or military forum. I'd spell it in english as; ghillie, Means; a handy/faithful lad, in scots gaelic.

All the best with the sale.

Also, a ghillie suit such as yours is a very individual bespoke item. No two suits will be the same, and whilst I know exactly how long they take to make up; a couple of hundred pounds for some sacking on a £20 jacket will make some baulk at the price.

Nice ......but too much green and mass for my liking. I know your pain though.....I once set abaht making one using a dpm sheet of burlap. I gave up I. The end (yup....Im a quitter lol) Glws

Sent from my Nexus 7 using Tapatalk 4

I think the problem you will have is as has already been said, they are "individual" to the area being worked, they aren't "one size fits all"

Also mentioned was the cost.

On Ebay this suit is £60, for a four piece kit, trousers, jacket, head cover and rifle cover. 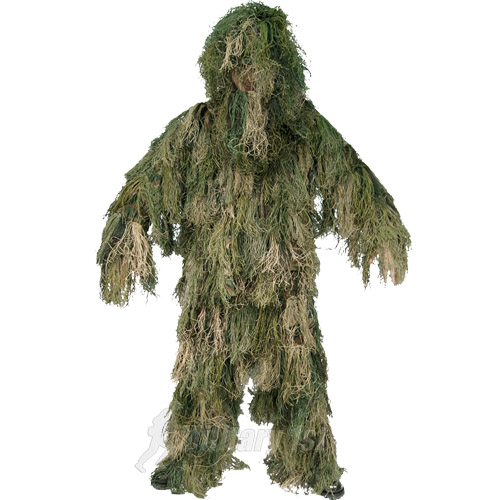 Good luck with finding a buyer, have you tried Army Rumour Service

I'm sure they will give you a fair response.

I'm sure they will give you a fair response.
Click to expand...

It is clear that you have invested a huge amount of time and effort in the jacket and ended up with a very impressive piece of kit. The trouble is that what you are offering is very expensive compared to others on the market. The ones on Military 1st (http://www.military1st.co.uk/shooting-ghillie-suits/) are between £60 & £90 and whilst they may not be quite up to the standard of yours, they are probably more than adequate for the average person looking to buy one.

Did you make yours with resale in mind or were you originally going to keep it for your own use? You will find that you are trying to sell to a very limited market. You have to find someone that takes that size jacket, in that colour combo and that is willing to pay two to three times the price of standard ghillie suits.

I know it is gut wrenching after all the effort you put in, but I fear that you may have to cut your losses and drastically reduce the price to find a buyer. You will also have to advertise it as widely as possible, if you haven't already done so. It does not look like you are going to get any takers here BCUK.

Good luck with sale - & have a good time in Germany.

ok..
1. I made it the size it is.. so that webbing could be worn under it.. and it is.. 1 size fits all.. thats why its the biggest jacket possible..
2. It was started as a xmas pressie for a mate who turned out to be a c**t and screwed me over. So I finished it, cant stand half done projects
3. Have a mate who is former SBS, and has taken a look at it and has given it his stamp of approval. (for those out there that go.. pff yeah....another wanna be.. No.. hes not.. I've seen the
proof!!!)
4. I'm on ARRSE, but no tried there yet.
5. comparing it to the crap they sell on the websites is pointless.. its like comparing a cheap chinese crap to a hand made rolls royce. (not that I'm saying the kit is a rolls royce merely using that as an analogy)
6. The ones your all showing as examples.. go check out in reality in a store.. They are w**k! when out side in them, you show up, like a sore thumb throbbing away. They are no IR proof.
7. yes it has a lot of green in... but it blends into browns. to finish mine.. it needs hanging outside in the weather for about 3 to 4 weeks.. I havent dont that yet, so its still a bit "bright" - dont forget, you wont always be in the
trees, which I think a lot of you are forgetting... you'll be inthe middle of fields...

(pic taken from a standard field...when out camping..
8. usually to adapt the whole thing, a special kind of spray paint is just used on little sections... so, brown... to give extra brown..light brown.. prior to going out into the "field" as it were.
9. Yes its kind of specialised, which to a degree this group is...
NOT going to drop the price.. if no one wants it here... then fine..
I'll keep it and use it as a prop... to scare the crap out of anyone trying to break in and steal my motorbike.... simples...

Mate, I did 9 years as a Regular and now supply the MOD. I know exactly what goes into making up a suit. I'm not knocking your kit and effort- you asked for some feedback and it was given. If you don't like it; don't ask for it. I genuinely wish you the best of luck with selling it.

At the end of the day burlap is sacking, whether it comes off a roll, a sack or a sandbag. I can buy a new unissued smock for £10 (yes ten pounds).

they are "individual" to the area being worked, they aren't "one size fits all"
Click to expand...

I don't think you quite grasped what I was saying there Viking, Your jacket is to specific for a green area, not all areas that require such a jacket are that colour scheme, hence ghillie suits aren't "One size fits all" The need to change the "Dressing" on this type of suit is an absolute necessity for the professional user. I had the privilege to be trained by one of the few qualified LRPs in the UK at the time, his jacket had very minimal stuff on it as it only had about a dozen tabs for fixing dressing too.

I also wear a 190/120 jacket, and wouldn't want to have any of my equipment underneath it, limiting access to my "stuff" would drive me potty (pottier than I already am...).

I make up dressing using hessian strips bought from Aldi/Lidl last year 50mm wide and about 25mtrs long, cheap as chips as well...

This is a sales thread guys
Can we stop high jacking it to discuss the ins and outs of ghillie suits please
If you want the item for sale, post it in the thread, if you don't want it, then don't post - simples!
If you want to offer some advice to the OP please take it to PM, not open forum on a sales thread
Thems the rules


"Courage is being scared to death-and saddling up anyway!"
-John Wayne-

Thread closed at request of OP

Status
Not open for further replies.