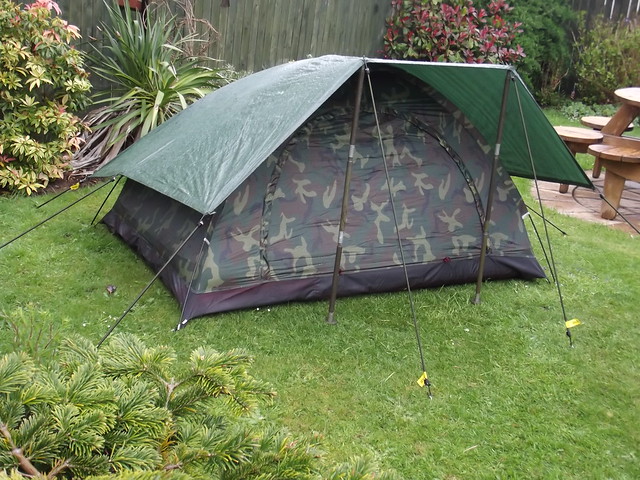 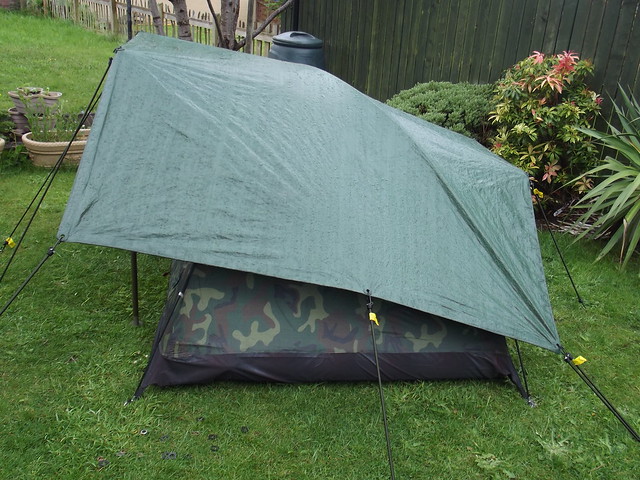 For added weather proofing over the top an 8 x 6 tarp Supported by some heavy wooden pup tent poles & secured by 10 bungee cords. 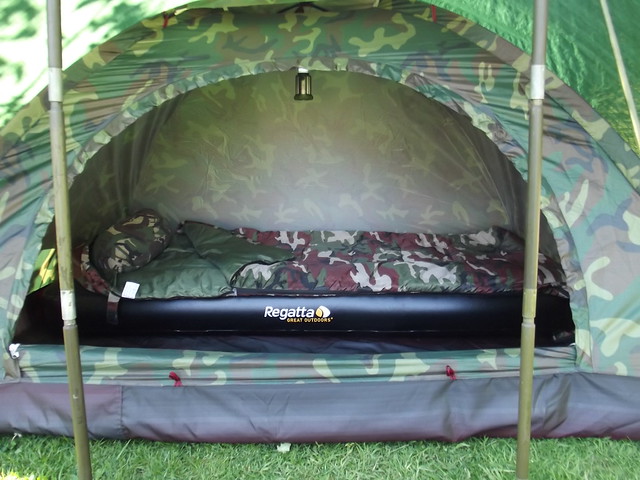 With the floor being constructed of rip stop nylon, common sense suggests water ingress issues would be inevitable through direct ground contact, so a 6 x 4 tarp on ground prior to pitching, takes care of that

stating the obvious, anything touching the sides is going to get a little damp from condensation.

I spent the night in the tent and it rained heavily with no obvious ingress from the rain,

It was a chilly night just cold enough to see your breath in the air & as soon as the tent was unzipped the difference in temperature was considerably noticeable it was uncomfortably colder outside the tent.
Lay on my airbed & with my highlander z mat for further insulation I was cosy, fully clothed (jeans, vest T-shirt, cotton shirt & a wool cardie) & In my cheap 20 quid from china sleeping bag I was comfortably warm & hadn&#8217;t heard the Heavy rain through the night which had left puddles on the table next to my tent, I had slept well until around 4 am when I was rudely awakened by some pesky woodpigeons hooting repeatedly like an alarm clock in a nearby tree. When they finally stopped, I was just nodding off again, at around 6am when I was awakened again, this time by some kids in a neighbouring tent who had been startled by a large wasp in their tent...

So relatively cheep! Reasonably light @1.5kg (not including the tarps poles & bungees) Does the job!

Pretty storm proof shelter, versatile with the tarp too, you should be cosy in there.

Sent from my VF-795 using Tapatalk

Robbing tombs in the deep south of Manannins Isle.

Just bought a cheapie one from Iceland (shop) for my young daughter to 'camp' in out in the garden, more of a 'disposable' festival tent but should do the trick.
You must log in or register to reply here.