I know you can use a small tin can, something knocked up from clay or just about any small container that won't leak or burn but for something a little bit more aesthetically pleasing here's what I use when I want a bit of outdoors mood lighting. 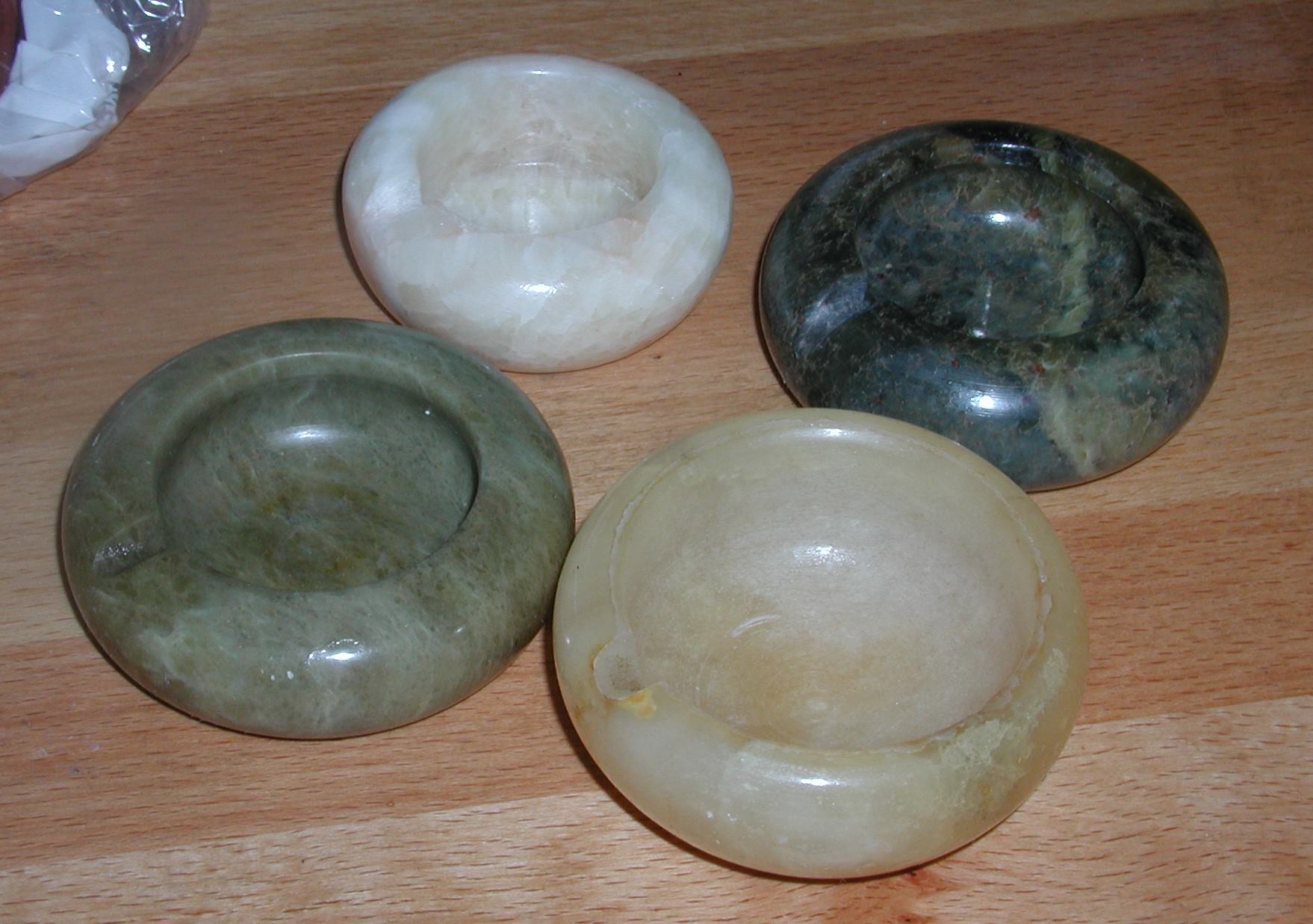 Charity shops and carboots have little stone (someone please identify them for me, I lump them, probably erroneously under "soapstone" ) trinket pots like these, often with the lid missing, for a quid or so. The groove for a wick takes no time to put in with a normal metal working file. For a wick I've been using 1/4" linen rope ( removed for washing here ) but there's various found fibres (please chime in here those of you in the know ) that you can use or short length of fibreglass wick should you want something that lasts much longer.

Personally I've had no joy using slush in them ( soft animal fat like you get left over from a joint or frying bacon ) but then again I've only tried it a couple of times, but any cooking oil will do, The faux Roman pottery jobs I've picked up (9 so far) I run on extra virgin olive oil as I found two bottles of it in the back of a low cupboard so far past their sell by dates that even herself wouldn't countenance eating the stuff but for these stone jobs I'm using cod liver oil since I couldn't find another fish (or bird, sometimes a oil from seabirds was used) oil available in the UK. It also helped being free, being about to be thrown out in disgust at the taste by a friend! Anyroad the smell ( which isn't so bad if you are used to natural smells, ) is quiet atmospheric and outdoors the smoke is no problem. They will blow out but no where as easily as candles, and you can normally find somewhere to put them that's sheltered.

The pots above are from 2 to 2.5" in diameter and most started off with lids, from the tiny wear marks. I've saved the one I got and have drilled and mounted it on a bolt for the day I actually find a chuck with a No. 1 Morse taper to hold it in to turn it into a weight for a drop spindle on my old woodworking lathe. I've saved some not worth restoring chisels and files to use and have the PPE to hand.

I also need to do a bit of research on the types of sea shell that were used for lamps, saying that I've yet to find a big enough shell at the beaches I've been to that's worth using.

Nice - i fancy having a try with that, will have to keep an eye out for suitable donor pots now

Tidy.
Those pots look like the ones that were sold as 'onyx' and were brought home as tourist souvenirs from Spain and the like in the 70's.
They were little pots, lighter bases, ash trays, nibble bowls, etc.,

Great bit of re-purposing! About as simple a lamp as is possible to get, but a bit prettier looking than just a rough rock with a slight hollow in it (like a paleolithic lamp)

A book of mine (Discovering Oil Lamps by Cecil A. Meadows) suggests that scallop, whelk and oyster shells were widely used in Europe, with fish oil being the most common fuel.
You must log in or register to reply here.