Ok, so we're all on a quest for that holy grail of kit.it may be a purist item, a technical item, historical maybe? Either or, there is I'm betting a piece of kit you consider the ideal that you just hanker after an oppurtunity to tweak to be just perfect for you. For me, its the humble smock. I've been using the SAS smock type garment for a long time now, mainly because its lightweight, well featured and has got that bit of legendary status. I've mainly found, from a personal aspect the use of a lightish but sturdy windproof shell over interchangeable insulating layers is the key to comfort for me. I don't really like an all featured top layer as it leaves me usually hot and damp underneath, and without the option of drying it out back to a comfort level. What I've found with the base layer, micro fleece and smock combination is something I can walk quite hard in, stay static in while shooting, keep the wind out, strip back a layer and use as a lightweight jacket, get a bit rained on and it seems to work well with all that, and dry out back to a comfortable layer. Something a lined goretex or soft shell can't always do, they seem to stay moist and cold if they build up too much heat inside. Anyway, so thats why I like a cotton smock. I used to use a standard pattern smock, then I encountered the SAS smock or arctic smock depending on which hood you prefer, bout 10 years ago and I've been a devoted user ever since, still much better than modern types that are based on jackets, this item gives a lot of fredom of movement and is very light. I also tried the ww2 army windproof, which I actually preferred the layout, but they are so expensive and rare, I also find them quite short cut. So I was after a middle ground. I then thought that was sorted with a company called SASS who are legendary, and had a garbadine smock made with various mods and a standard smock in their ventile type cotton. Never got on with the ventile, please all don't lynch me for it, but I loved it as a windproof, but it did by design absorb water for the ventile effect to take place, and it took twice as long to dry out compared to the garbadine type, so I sold it on to a lucky chap in australia who took it off me on ebay for £50!! Ouch.
An example of a couple of my smocks....

Anyway, the garbadine one has powered on for years now and is still going strong as are my dpm issue ones, but I have reached a stage where I'm fed up with the kit all being camo so am trying to get an alternative in plain colours, SASS no longer produce smocks and no one mainstream has taken on the challenge. I then saw a thread on here called 'show us your smocks', where something caught my eye. A home mades smock by Bilmo. That was enough for me and I got straight onto him to see if it was a project that could be done. We bounced several emails back and fourth abouth the project and I sent a smock that I liked the size of to him for measurements to be taken from. We then discussed materials and several examples were provided for me to have a look at, one caught my eye and was apparently a burberry shower proof cotton in drab khaki colour. What I liked was its windproofness and the lightweight aspect. It was exactly right so I settled on that. Next arrived a mock up of the smock and it was superb. Ian was so helpful, especially when I decided I needed a full zip for a more flexible garment. When the mock up arrived and I was asked to draw on pockets etc, I was hit with its retro potential, this was my chance to get those ww2 smock features on a modern smocks chasis as it were. I went into full retro sas mode with it and asked for a brass zip and for it to be exposed a la 1970s sas issue, and press stud buttons like a wax jacket. Mr mears had something similar in the jungles when he first started doing extreme survival, and I in fact saw one very similar in the 'show us your smocks' thread. My mind was set and I sent it back to Bilmo to instigate my inner childs requirements. I have to say the mock up was in itself superb and filled me with a lot of confidence. Further emails about specifics followed and the unflappable tailor set to his task, the results when they arrived were awesome, truly awesome. I recieved a true hybrid between the old smock and the new, made completely to my preferred size, and specs. the original mock up arrived with raglan sleeves which I would never have thought of, but they give such good movement I'm glad they were put on. The colour is a little like bronze ventile I suppose, then the poppers and brass zip are all vintage effect and give the product a real retro quality. I'm so pleased with it, here are some pics...

Ww2 smock on left and bilmo smock on right. See the similar features but longer cut.

Its only had a couple of outings so far, none with anyone to take a piccy of it actually on and in use so I will get some another day. The fit is kind of like those longer walking jackets from the 1960s and 70s. It got a sharp shower on one day this week while out and though the smock was damp inside and spots of rain were visible on the inside it dried almost straight away, must be the coating on the fibres not allowing much absorbtion into the material. I can also confirm its windproof thanks to the east anglian terrain allowing a gale to sweep majestically across the plains to my locale. I imagine long term care would include either nikwax cotton proof or greenland wax, but I don't use either on my cotton smocks now so probably won't with this one unless washing degrades the finish badly. In short, an excellent product, a very patient and accommodating tailor who has produced something superb for a very happy customer. I doubt I'll contact anyone else for gear like this now.
Some more pics, showing the cut of item once on and why I chose to have chest pockets set lower, you can open and get items out of the pocket with the hand on same side as pocket, meaning you can operate one handed, cant do that with modern smocks you have to fish around in them.

Smock is very flexible, can cinch up drawstrings to keep the draughts out or leave it loose. Was out shooting with it jumping down from vehicles etc in windy conditions and it was great.
Last edited: Apr 18, 2014

That is a great looking smock/jacket I like the idea of lightweight waterproof(?) wind proof layer that dries quickly.


Sent from the smoke clouds of a poorly lit fire...

Very nice. I've just taken delivery of one of his tarps and it's fantastic

weekender said:
That is a great looking smock/jacket I like the idea of lightweight waterproof(?) wind proof layer that dries quickly.


Sent from the smoke clouds of a poorly lit fire...
Click to expand...

I wouldn't go as far as waterproof as it does soak in, but the rate of drying out is superb. So lightweight as well.

I thought as much that's why I question marked it... Not waterproof as such but dries quickly. So in the event of a big downpour run for cover of reach for waterproof.


Sent from the smoke clouds of a poorly lit fire...

What a brilliant way to fine tune your garment, having a toile to mark up those important details im not surprised you've got such a fine outcome with a garment you'll enjoy for years after the mass produced, off the peg jobbies have given up.

great work there Blimo. It is a good mix of the windproof and para smock. I love my artic windproof it has lasted me almost 20 years although it now has a few holes and the cuffs are worn quite a lot but is still one of my favourites.

Thank you all for the kind words.

Great smock, well done Bilmo! I've got some of his gear and it's the best quality tarp going!

That looks like my kind of gear - but I prefer Ventile (though Gabardine is great too!) and used a Ventile ish fabric for my smocks

Out of interest, how much does the Bilmo smock weigh please?

Erm, hate to be a party pooper, but shouldn't the details marked with pink arrows be at the same height? 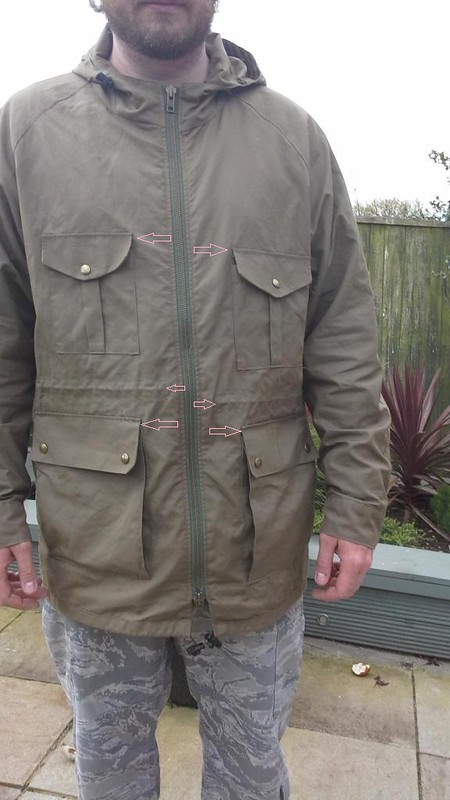 Yes , they should. I didn't realise the differences were as bad as they were until I saw it on its owner, at which time I offered to correct my errors.
Thank you for pointing them out; it won't be happening again.

Theres always one isn't there.
For the record I love the smock, and until the temps picked have been using it daily. Its smashing. Bilmo offered immediately to rectify any issues, I have none with the smock. Its mine, I love it, and I dont give a tinkers cuss if its not upto swedish standards of perfection.

Rabbitsmacker said:
Theres always one isn't there.
For the record I love the smock, and until the temps picked have been using it daily. Its smashing. Bilmo offered immediately to rectify any issues, I have none with the smock. Its mine, I love it, and I dont give a tinkers cuss if its not upto swedish standards of perfection.
Click to expand...

Sorry to disappoint you, but I learned my standards of perfection in Yorkshire.

And hats off to Bilmo for offering a made to measure service for wilderness clothes.
You must log in or register to reply here.