In recent weeks the forum has attracted scammers. Be on the look out.

We were informed of the situation by one of the members who lost money to one of them and reported it. Subsequently, two more highly suspect accounts were highlighted, one was banned in the middle of a PM conversation with a member.

Usually, when we get spammers, who join to post links to everything from fake watches to US church groups, we delete the accounts and all posts, and report them as spam. In this case, we have merely banned the three accounts so that their posts can be used as an example.

The MO of these scammers is to build a post count in the forum to allow themselves access to the PM system, then reply to people who have posted Wants, using PM. They claim to have the item, may even post pictures, but the picture has just been copied from some other source. They like being paid with BACS or Paypal Friends and Family. No item is ever shipped, they make excuses to give themselves time to defraud another few members, then move on, either to a new ID on the same forum, or to another forum.

bushcraftuk.com
This character was reported after defrauding one member, and while we were looking into him, he was reported by another member for trying the same trick and is now banned. The same ID was used for scamming on several other forums, all with the same MO. Note that the stated location for the member was changed, forum to forum.

SELLER: - Watch out for this scammer bruno73

bruno73 this guy contacted me via messenger, responding to my WTB thread. Said he had just what I needed, sent me photos gave me a back story the whole works. He even had a thread on here that seemed legit etc. I was about to send him payment, but then he was kind of rushing me etc, so it felt...

@john66 is a scamming POS. I posted a wtb ad for a badger comm mount. He messaged me, then sent pics of 2 different mounts claiming them to be the same and his. And then sent a photoshopped picture of another different mount with his name next to it. Asked why it was photoshopped then never...

eric27 - scammer on these forums - messaged me 5 min ago

Following this discovery, advanced pattern recognition highlighted these accounts and they too were banned.
Joseph457

https://bushcraftuk.com/community/members/joseph457.55542/#about
*I have just had a PM telling me that this account was used to defraud another member*

There are other accounts that are under observation, but have as yet made no posts.

We have been fortunate so far that as a forum we have been small and obscure enough not to attract this sort of criminal. This may gave fostered a false sense of security where we assume everyone on the forum is a friendly, trustworthy, part of our community.

If the first we hear or take action over is when a member actually gets scammed, that is a bit too late. If it quacks and waddles, it gets treated like a duck.


I would like to tell you how to spot scammers and spammers, but that would also be telling the scammers what to do to avoid detection. I can give some info though.

Photos of items. In the past, I have used https://tineye.com/ to search for images to see if they are used by other people on other sites. This is not effective against scammers copy/pasting photos to pass off as the kit they are offering. Maybe just the effect of the march of progress. I searched for a photo posted in 2019 that was used by Bruno73 and got no hits at all, whether I pasted the URL where it was hosted, or uploaded a screen grabbed image. A better technique is likely to be to do your own Google/Bing image search for the item and see if the photo you have been sent shows up. This technique showed up the picture Bruno73 used.

Payment: Forum rules say no Paypal Friends and Family. Assume no one honest will ask. If you want to pay BACS, you should know the person, or at least have a solid feel for their posting. More on this in a moment. If the name they give and the bank details do not match, big red flag. Report them!

Posting style and knowing people: This is the internet and people with hundreds or even thousands of posts in some places have up and done the darnedest things, however, genuine participation, especially over years of membership does tend to show and be a pretty good indicator for trust. In contrast, someone who has racked up a dozen or so posts that look like generic fluff, that required little effort on their part, and added nothing to the conversation, has provided little proof they can be trusted.

Be on you toes folks.
Reactions: David Lennon, MrEd, gra_farmer and 9 others

It's worth pointing out that if you do get caught out and you raise the issue with the police we're more than happy to pass on any info we have to them to help with any investigation...
Reactions: David Lennon, Robson Valley, gra_farmer and 6 others

, these gutless lazy scumbags are operating all over the net, hopefully they will all die a slow painfull and nasty death. Hard working people all over mugged for their hard earned by these bottom feeder scum
Reactions: rcwells and Scottieoutdoors

Glad you guys are on top of it. Thanks for all the Hard work that goes on in the background.
Reactions: Rambo Rees and Brizzlebush
D

It's a brave individual who decides to scam knife and firearms forums....it's always been so civilised (not to say heavily armed) around here

lostplanet said:
Glad you guys are on top of it. Thanks for all the Hard work that goes on in the background.
Click to expand...

Absolutely, you do a great job.
Reactions: David Lennon and Brizzlebush

I have been told that now that the characters are banned, members cannot follow the links and view the posts they made. I had hoped to use those posts as an example of what to look for. Here are snap shots. 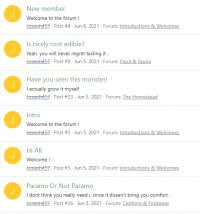 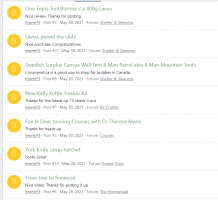 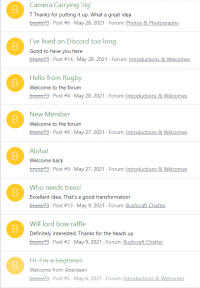 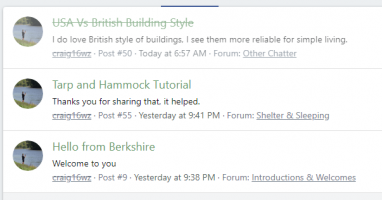 I have just been on a couple of US forums and this particular scam has been running for over a year. BCUSA had a warning go out in April and Hammock Forums has a permanent banner warning in their Wanted section and link to a description of the scam from April 2020.
Reactions: rcwells and punkrockcaveman

I thought that cicely root comment was odd!!!
W

Yes, especially as the previous post was talking about Cannabis farms…

This does re-enforce the argument for PayPal only exchanges so that money can be reclaimed on duff deals...
W

Although not infallible when a sale/trade is successful it’s worth putting a further entry to say the trade went ahead, gives a record on the forum and builds trust
Reactions: David Lennon, plastic-ninja, Rambo Rees and 3 others

Tony said:
This does re-enforce the argument for PayPal only exchanges so that money can be reclaimed on duff deals...
Click to expand...

Duff deals aren’t scams though.
Disagreement is far removed from being fleeced....PayPal fleeces all
BT ought to be fine amongst long term members/posters.

ScottE said:
Duff deals aren’t scams though.
Disagreement is far removed from being fleeced....PayPal fleeces all
BT ought to be fine amongst long term members/posters.
Click to expand...

Sorry, I'm clearly missing something here! Explain to me how PayPal fleeces people please - I genuinely don't understand. They are a commercial company that charges a fee for providing a very secure and protected service. I have used them for years and have never felt 'fleeced' or had any issue with any transaction whatsoever. One could argue about the level of the fee perhaps but, like all pricing in a competitive market place, it wouldn't exist if it wasn't 'reasonable' for the service provided.

The level of fee, for handling other people’s hard earned money where most of the times that handling is smooth and faultless.
You don’t need to agree with me!

ScottE said:
The level of fee, for handling other people’s hard earned money where most of the times that handling is smooth and faultless.
You don’t need to agree with me!
Click to expand...

You've covered the reason to have it though - for the remainder of those times aside than the 'most' where things are smooth and faultless.

That being said, I use BT with people I've known here long enough to be comfortable. The need for the PayPal 'insurance' is greatly diminished, to the extent that I don't feel I need it.

I totally understand BCUK's push for PayPal only. They're looking out for the lowest common denominator, and that'll be people who don't know each other.

Big companies handling everyone’s money and us losing the value of trade or barter is what’s going wrong on this planet right now....if bushcrafty countryside people are happy for their ability to build trust/barter/trade to be lost then crack on with PP.

ScottE said:
Big companies handling everyone’s money and us losing the value of trade or barter is what’s going wrong on this planet right now....if bushcrafty countryside people are happy for their ability to build trust/barter/trade to be lost then crack on with PP.
Click to expand...

You can still do trades, and pay those you know with cash or BT if you so wish? There's no removal of that option.

(Say I as a bushcrafty city boy)
Reactions: ScottE

ScottE said:
Big companies handling everyone’s money and us losing the value of trade or barter is what’s going wrong on this planet right now....if bushcrafty countryside people are happy for their ability to build trust/barter/trade to be lost then crack on with PP.
Click to expand...

You see, that's what I don't understand - it's a free country, you choose. Big companies employ lots of people and pay lots of wages; it makes the modern world go around. I ran my own companies for thirty years and I had to be innovative to compete with big competition - but we did and we succeeded. I have no qualms with big companies at all (subject to ethical practice).

As you say, we don't have to agree
Reactions: ScottE
You must log in or register to reply here.

Beware of Scammers on the Forum!

What to do if your posts don't appear, or you find you are banned